What a week we have had (again)! This weeks journey brought us to sharks, mantas, stray birds and pilot whales. We dived, we toured, we enjoyed Fijian culture (KAVA TIME!!) and had a blast with a great bunch who had been waiting for years to come to Fiji. They were not disappointed! 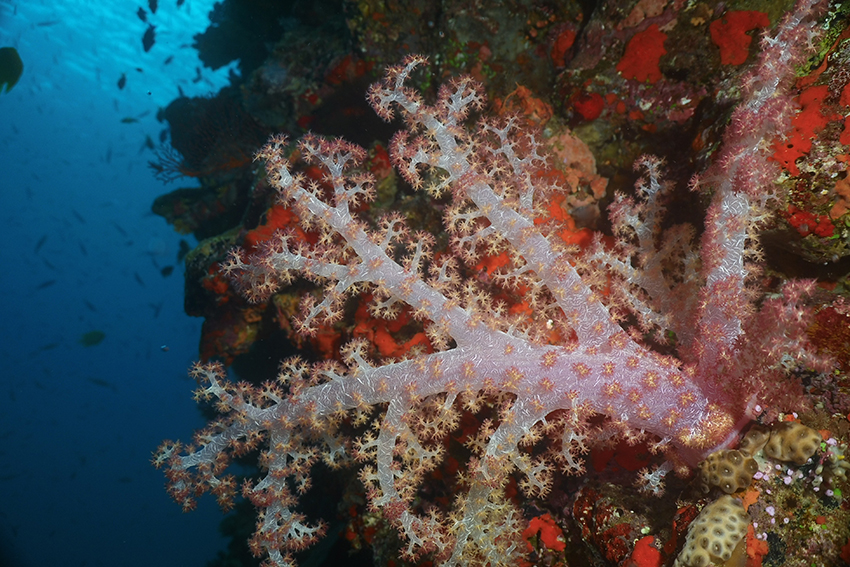 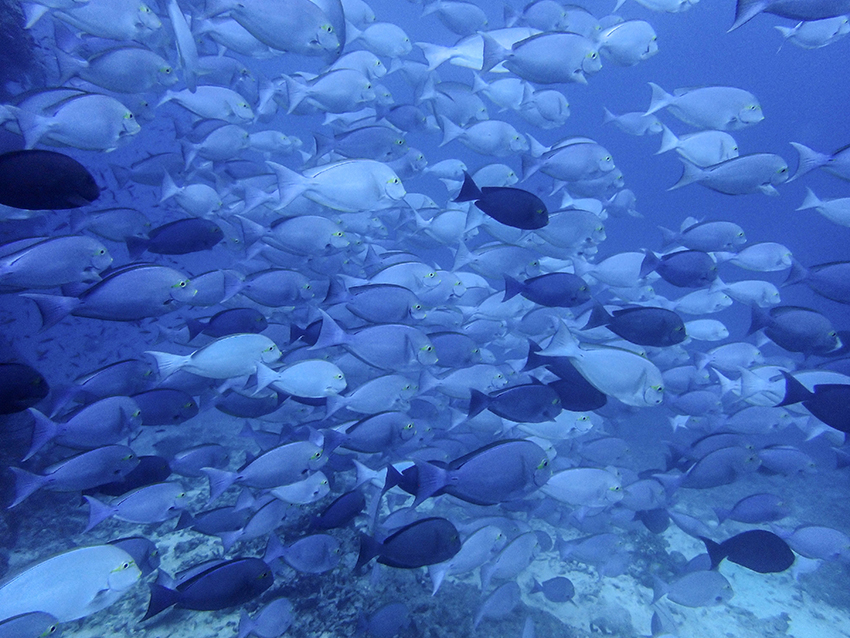 Photo by Bel: Engulfed by Surgeonfish 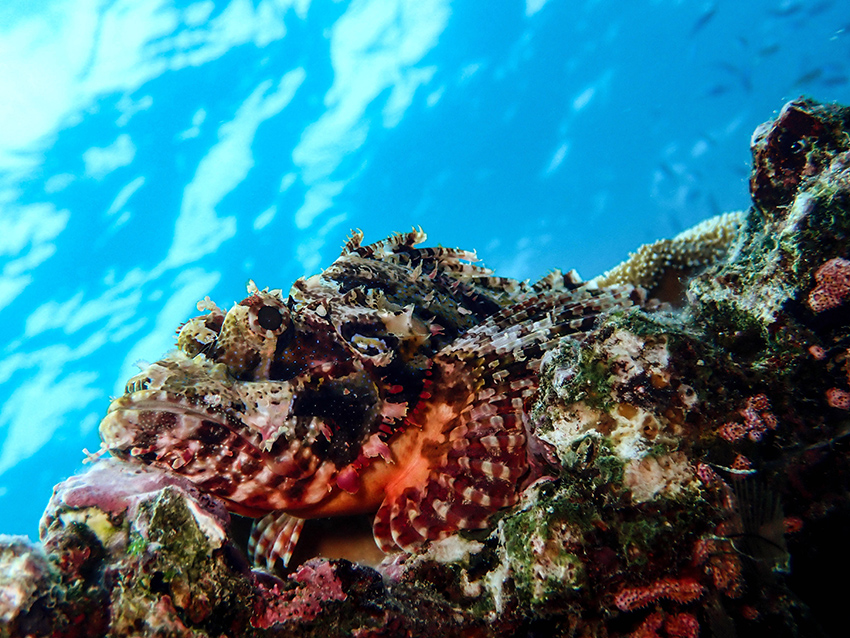 We welcomed aboard Ocean Quest Scuba, a quirky group of experienced divers, and their fierce leader Sandy. They brought us a gorgeous flower arrangement and kava for the crew, which immediately put them in everyone’s best side. Not a part of their dysfunctional dive family were Jan (Fish Geek Extraordinaire) and Bram (the man who is always so excited). During the trip we were due 3 birthday celebrations and 2 important diving milestone: 100th and 500th dives. With that in mind we set sail ready for an epic journey.

Our first morning started late as we waited around Nananu-i-ra area for Tony, who missed his flight and arrived a day late. The Maze and Wedding Chapel were a nice easy way to start the day, and we saw some beautiful Crown Jellyfish, loads of Chromodoris Lochi (aka Fiji nudis), and enjoyed the labyrinthic landscape. With Tony safely on board (and properly hazed by the other divers), we headed to Vatu-i-ra to dive Mellow Yellow and Coral Corner. Wowed after the two dives, the group was stoked about Fiji diving. Sandy had tried her best to prepare them for what it is like, but sometimes words are not enough. The most enthusiastic night divers so far, all but 1 diver joined us at Alacrity, where we saw a gazillion decorator crabs, beautiful clams, nudibranchs and giant shrimps. A small chaos caused by a current change cut the dive short at 50 minutes and we made our way safely back to NAI’A. 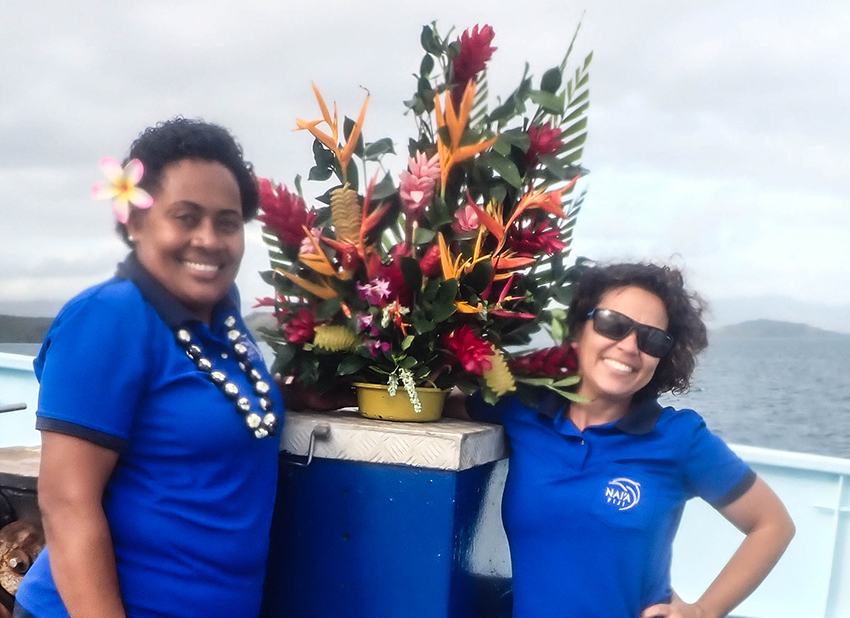 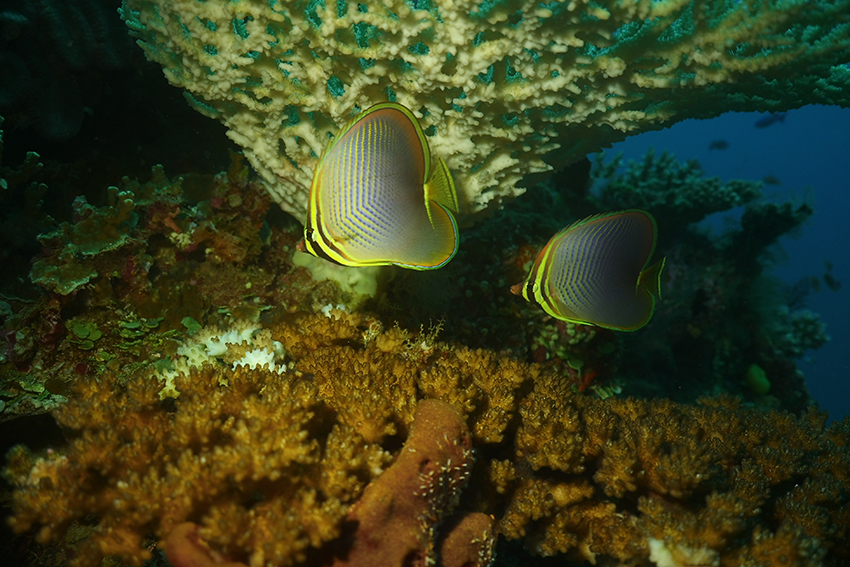 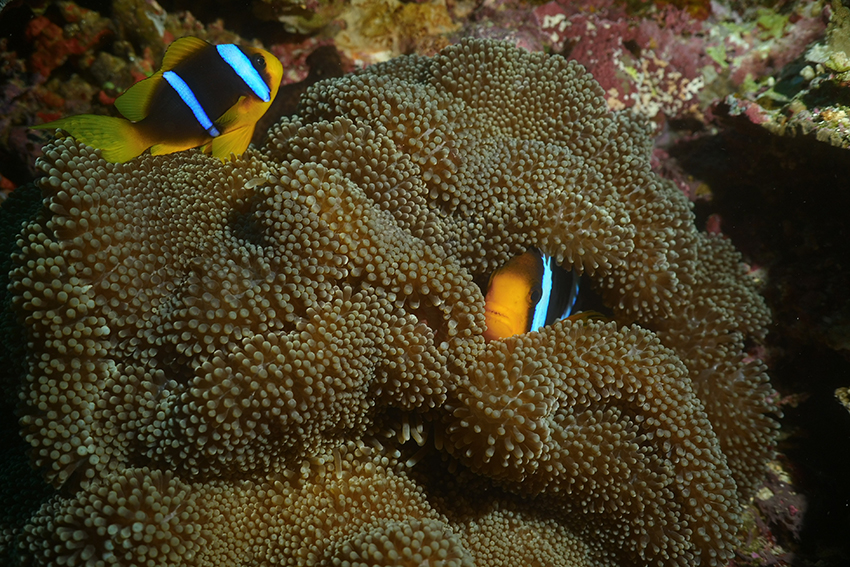 We cruised gently overnight to Namena Marine Reserve and spent our day among White Tip and Gray Reef sharks, Crescent Tail Bigeyes, Reeftop Pipefish, Twotone and Yellownose Dartfish, Jacks, Bigeye and Pickhandle Barracudas, huge Tunas, Humphead Wrasse, a Midas Blenny hanging out with the Scalefin Anthias (thank you for the help with the ID, Jan!), Golden Mantis, Longnose Butterflyfish and all the other usual suspects. In the evening, our Kava Party sent most of the group to bed early (especially the high-tiders). Tony,however, stayed up with the guys until midnight, earned the title of Chief, and lived to regret it the next day.

Our second day at Namena was just as fabulous as the first. We saw Pygmy Seahorses, octopuses, a turtle, stingrays, more pipefish, a Goliath Grouper, a huge Sweetlip, flatworms, flabelinas, Palette Surgeonfish (Dory), a couple, an absurd amount of Bigeye Barracudas, Rainbow Runners, Schooling Bannerfish and all the phenomenal soft corals that Namena can offer. Bel and Wally had a “too close for comfort” shark encounter, but as it turns out he was just very curious. The night dive (down to 3 divers out of 15) was uneventful and the remaining guests sat on our top deck watching the dazzling stars. 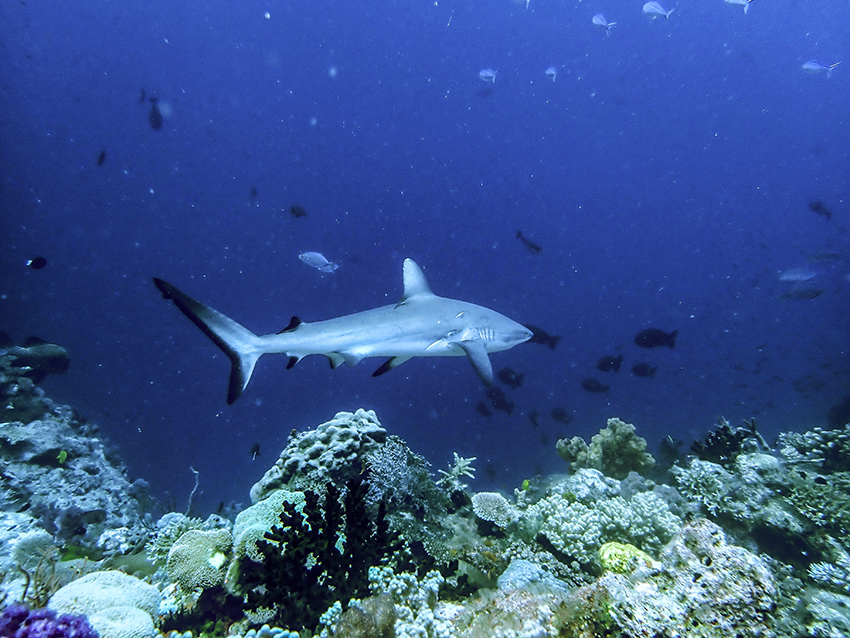 Photo by Bel: The curious shark that made Bel ink a little 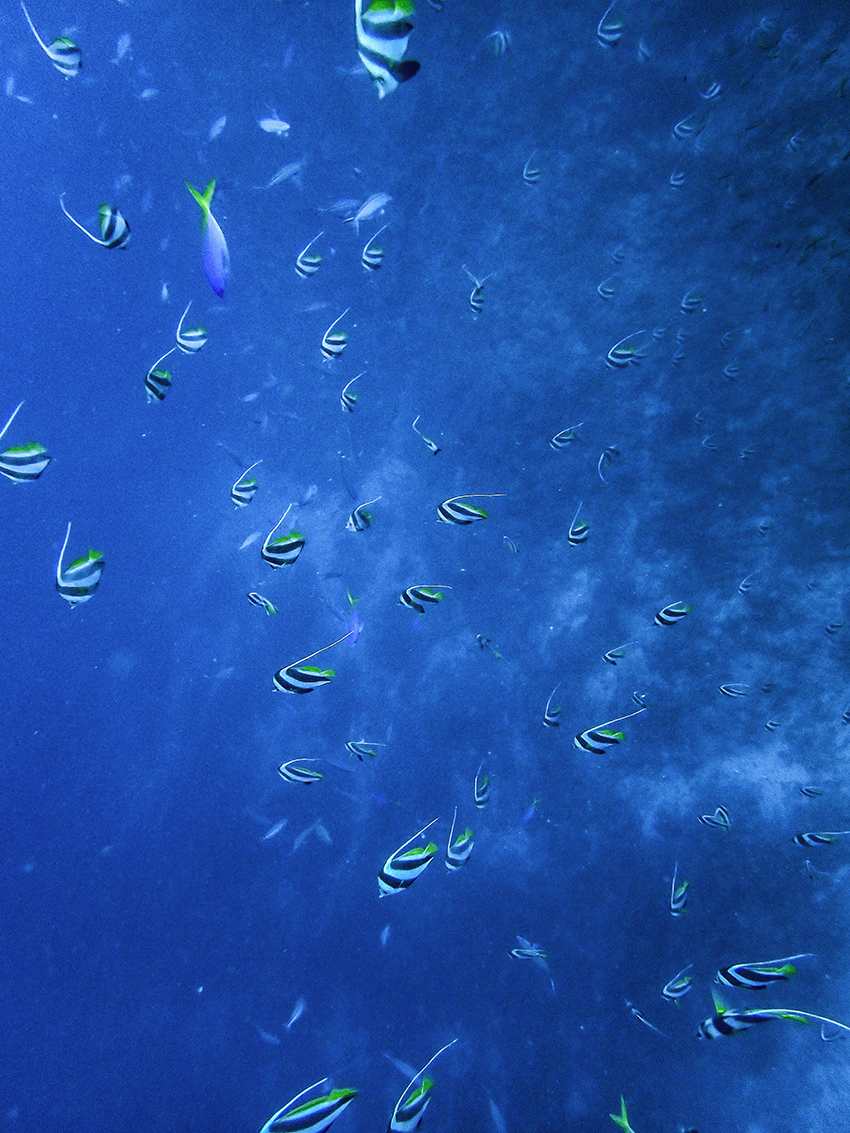 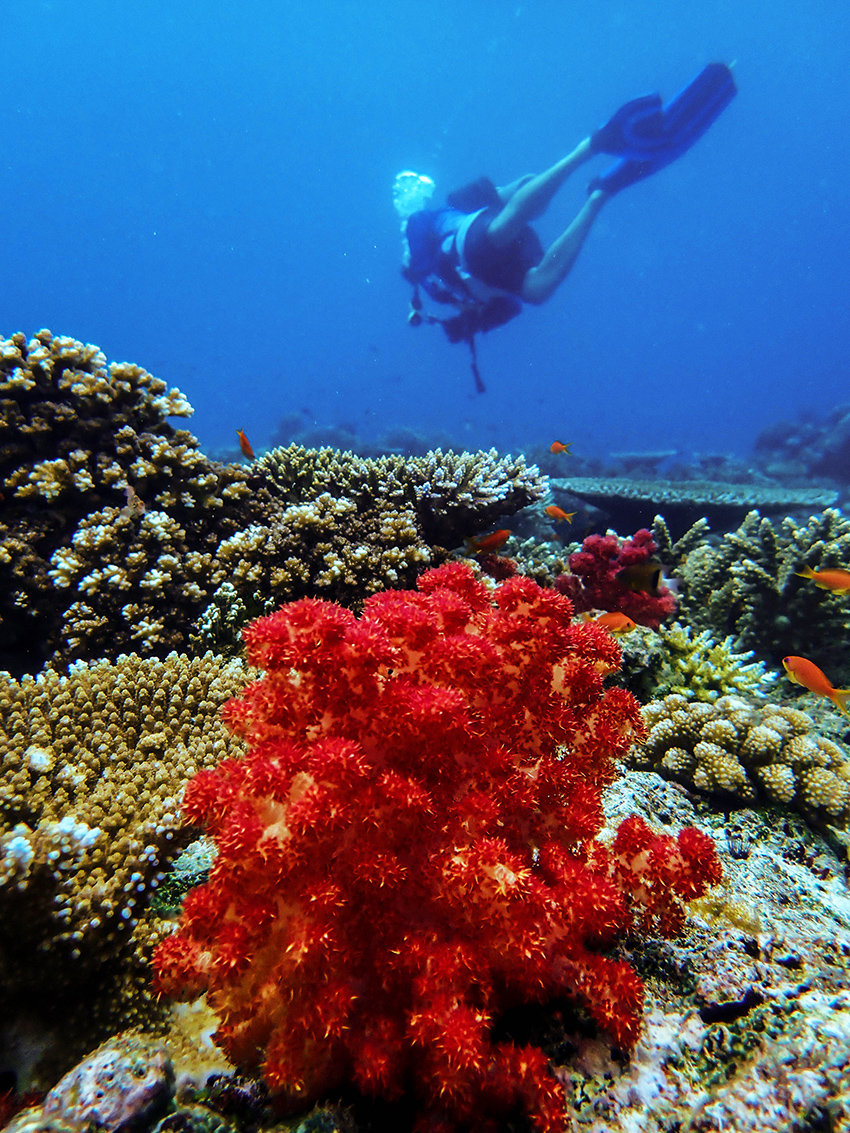 After another gentle passage, we woke up at Wakaya, home to our favourite mantas and hammerheads. Mighty Righty started the day with magical encounters with two Reef Mantas (one of them a confirmed new manta on the Manta Trust Database, to be named Sunday). The two of them actually danced on top of the cleaning station together… All this before our Second Breakfast! Later in the day, we dived with more nudibranchs, a juvenile Spotted Parrotfish, Green Jobfish, some scorpionfish and many new species for Janet’s surveys. We then went on our Village Visit to Makogai and it was the first time since we started that 100% of the group joined. Sandy, Steve and Liz were stoked to get to go to the same village they visited back in 2014. 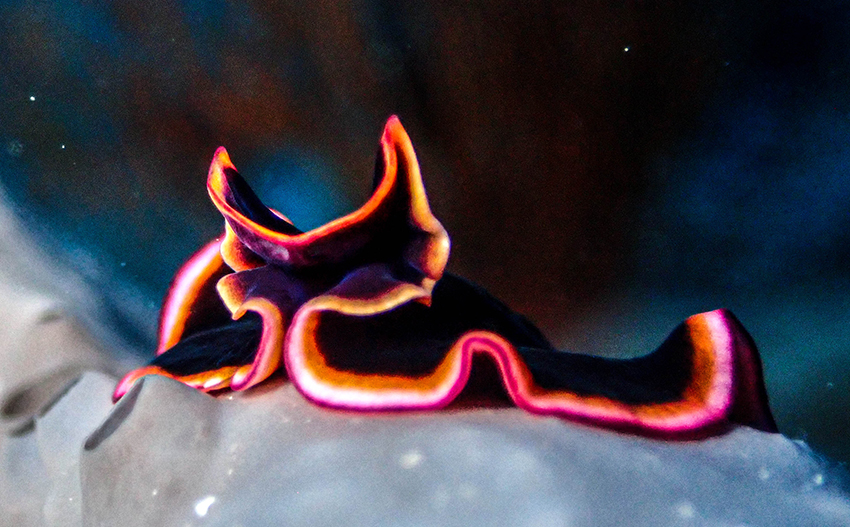 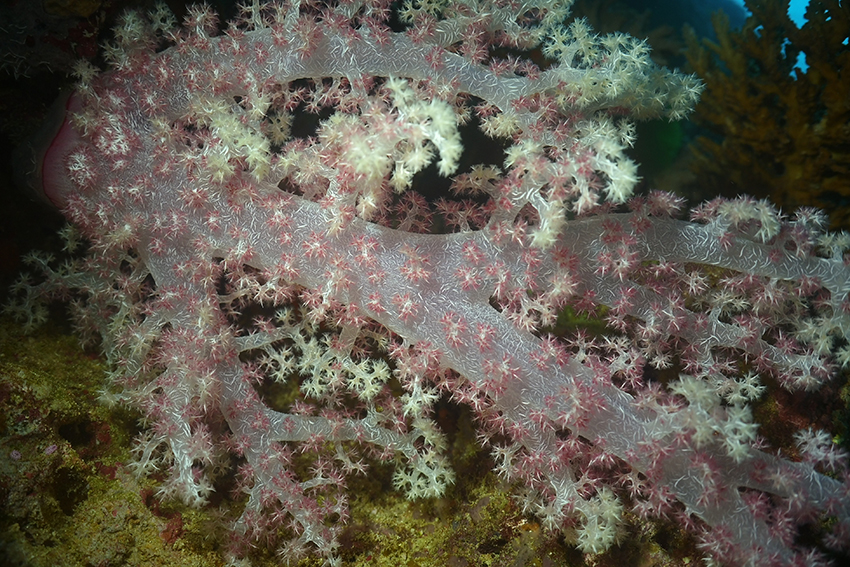 Photo by Sandy: one can never get enough of the soft corals! 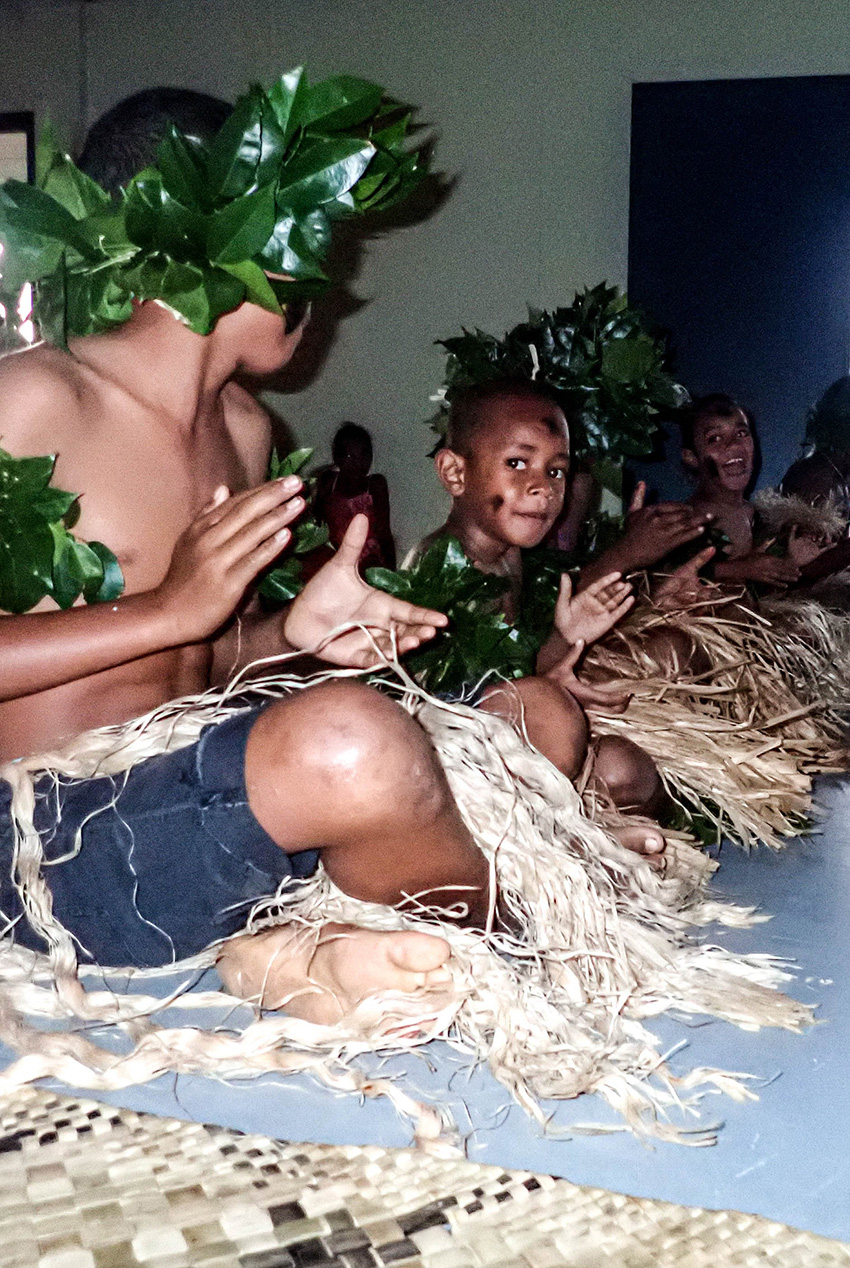 The next day was Bel’s birthday, and she celebrated with wonderful dives at the Sea Mounts. Sightings through the day included clouds of Ternate Chromis, some juvenile White Tips, a Pastel nudibranch, a few lobsters, a Sea Spider and a storm of fusiliers raining down on us. Not to mention the always mesmerizing Rainbow Wall and the Cathedral. As it was too rough for a night dive, the group had a few sundowners and enjoyed the sunset instead. Tough.

After spending the night anchored, we had a last day to enjoy Vatu-i-ra, but before we could get any diving done, Mo found a White-faced Storm Petrel (aka Peter Petrel) on NAI’A… he could not take off so we improvised a little dark tent for him (they’re nocturnal birds) and let him rest during the day. The dives involved various degrees of current and the last one (meant to be a Zen Dive) turned to controlled chaos for about 1 minute as we all got shot to different areas of Howard’s Diner. Everyone found new dive buddies and finished the dive wherever they ended up. Sandy had definitely trained them well. On one of the dives Jan logged 70 species (current = abundance!), and other sightings included a mini flatworm and many Blue Velvet Angelfish. As we were pulling anchor to head back to Lautoka, Chris spotted Pilot Whales right next to NAI’A! 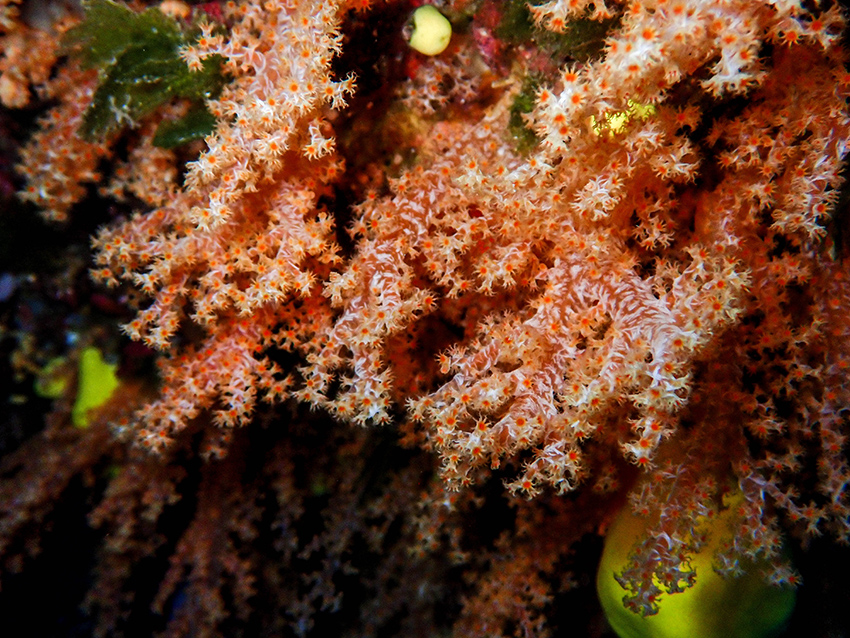 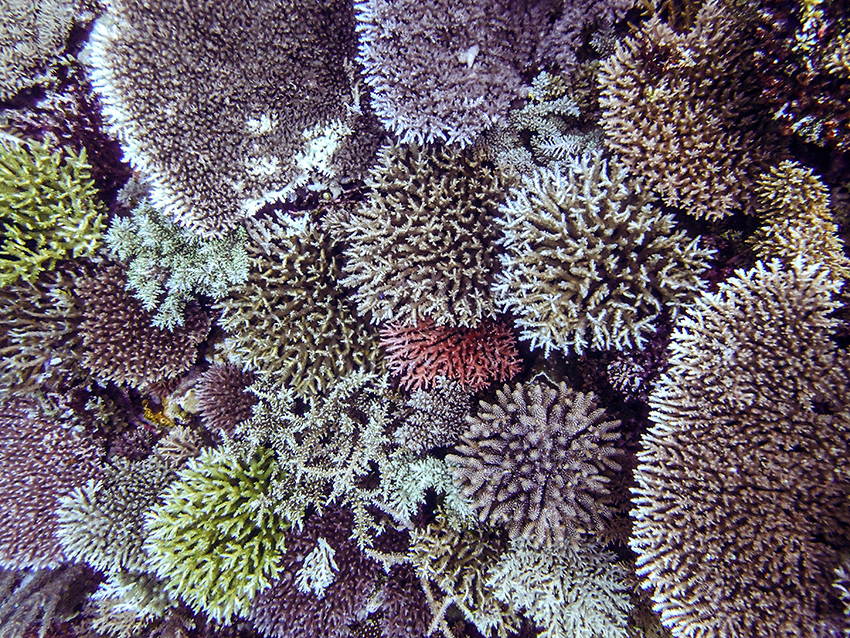 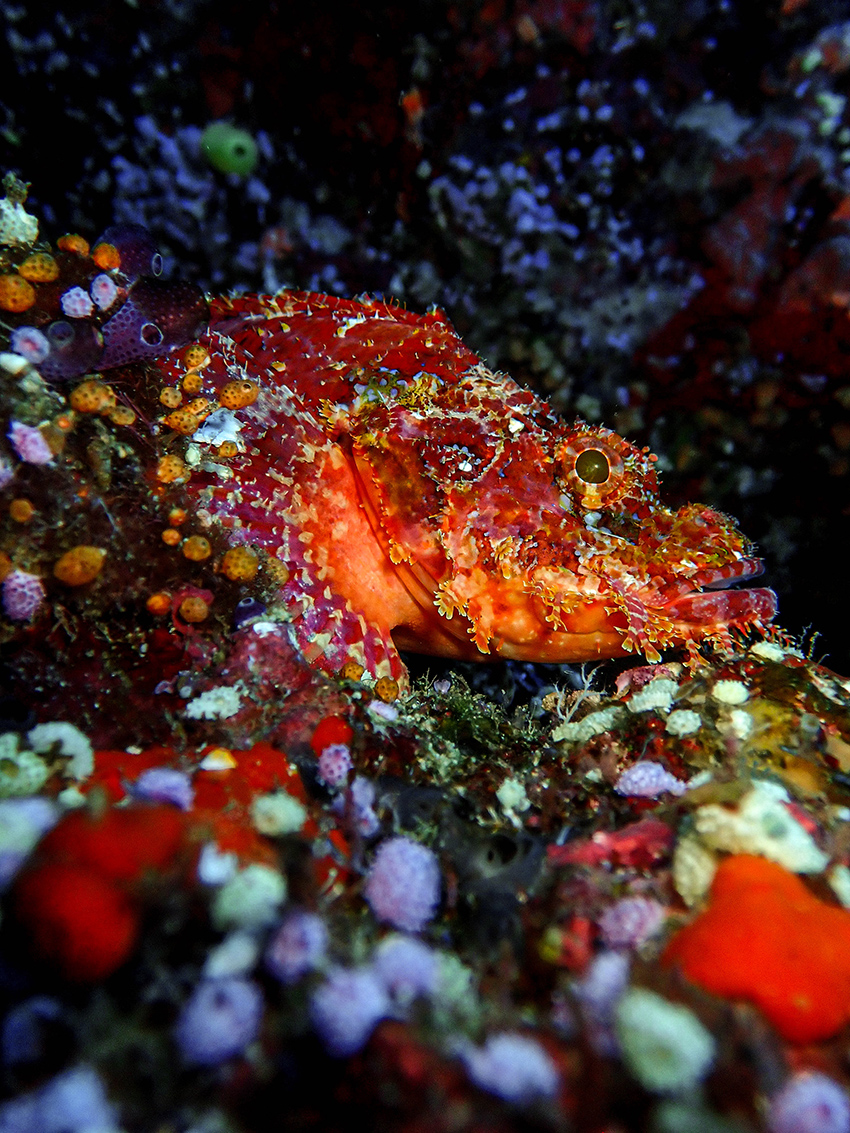 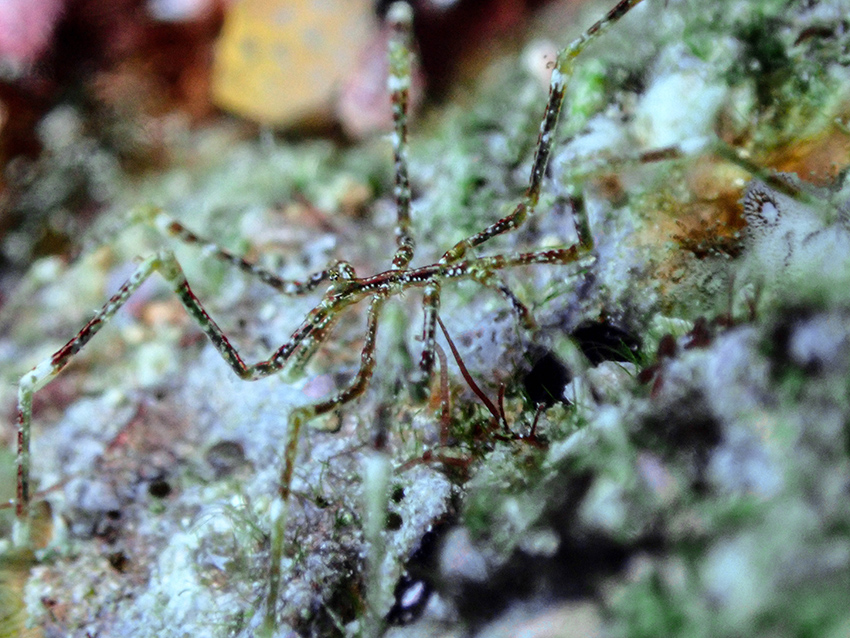 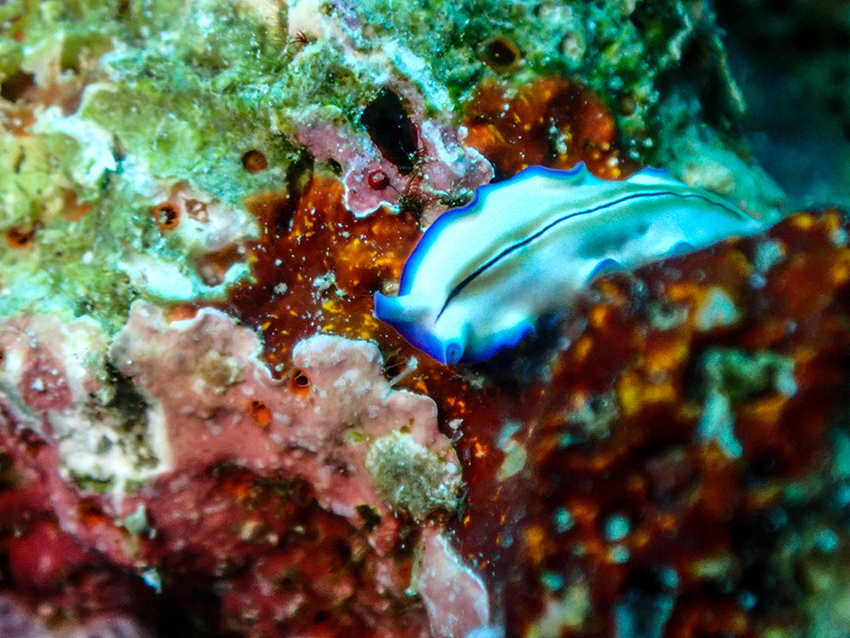 After sending BirdLife pictures of Peter Petrel (FYI, when someone asks for pictures of a birds bottom, they don’t mean the birds butt), Bel got instructions on how to release the little guy. So, as we neared sunset, it was time to let Peter Petrel fly away after a day resting in his little cave. A little terrified like a concerned mother, Bel followed the guidelines and released him safely. He flew strong to everyone’s relief. A bittersweet goodbye, much like the ones we had to say next morning. We had a blast with all of you and hope to see you again!

PS: Happy birthday, Ana! From the entire NAI'A family and our guests. You deserve the world. 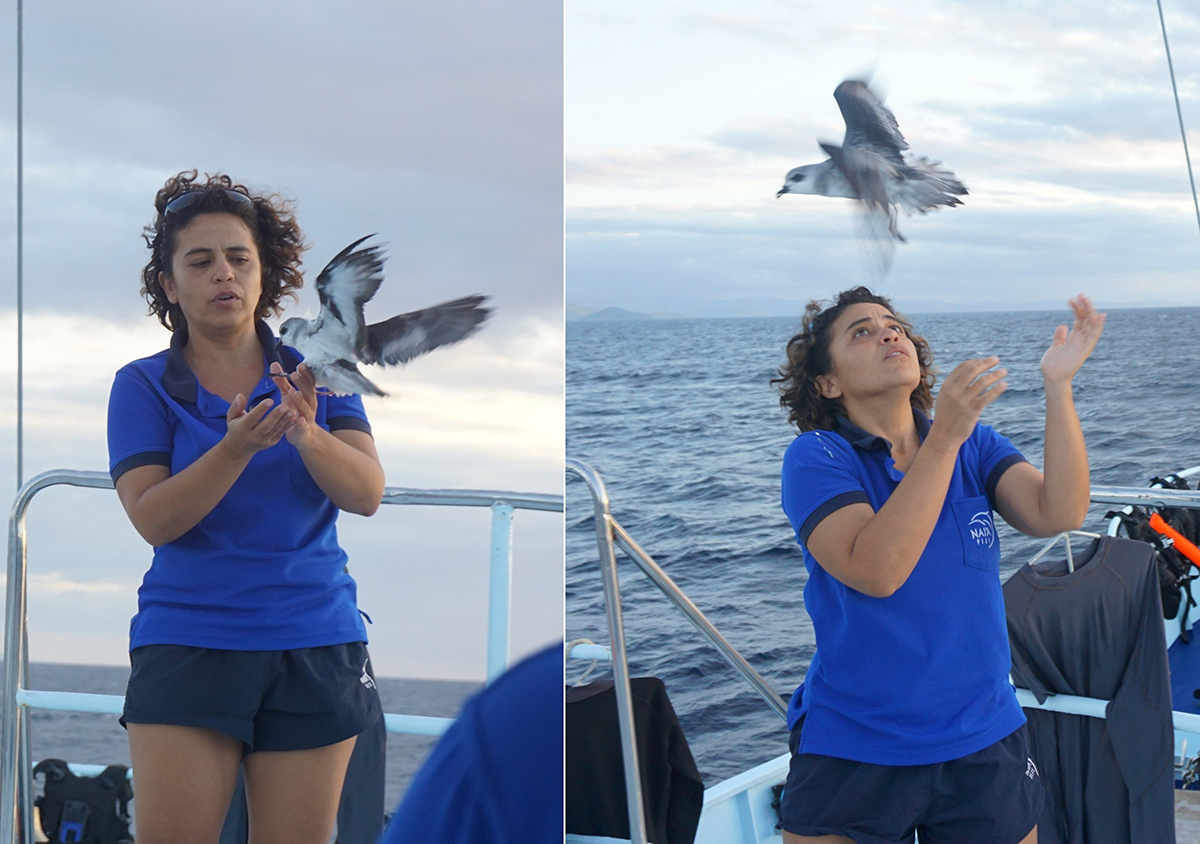 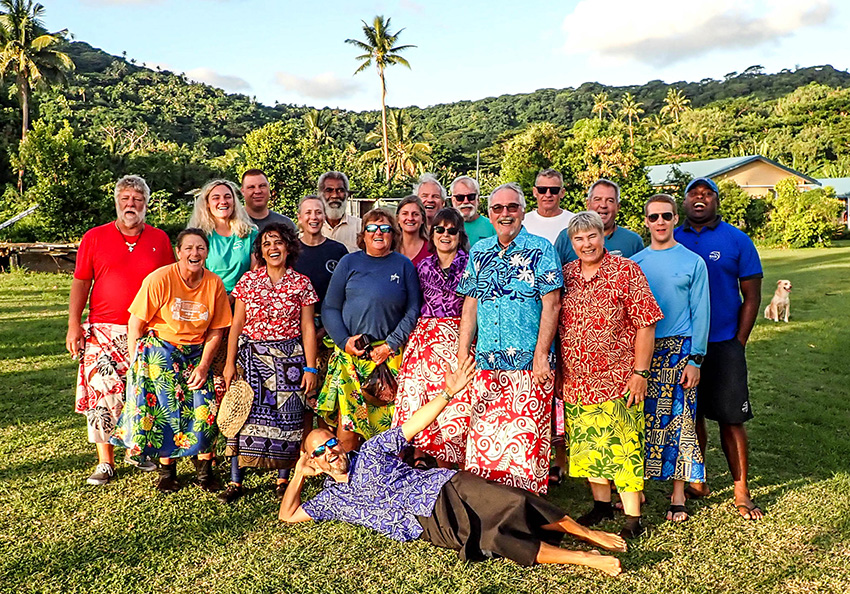 This trips trouble makers. Until next time!