We Are Family (and Friends)!

After a hugely successful first trip of the season, we were eager to get back out there for our second charter! We were joined by the loveliest group of people. Dominick Macan of Dive Advice, had booked this trip four years ago as a gift for his family, including his then four and six-year-old grandsons, Rupert and Oliver (now eight and ten and more than ready to enjoy some impressive whale action!). Along with multiple family members, Dominick also brought friends from around the world: UK, US, Germany, Russia and Hong Kong were all represented!

After boarding in Nukualofa, we traveled overnight up to the middle group of islands in Tonga, Ha’apai. We awoke that first morning to beautiful blue skies and calm seas, so got right out there straight after breakfast. What an incredible first in-water session! Not only did everyone get to see a whale, some even had three huge ones twisting and turning below them, putting on a show: a pretty good first ever whale encounter, we reckon. We were all so impressed with how Oliver, Rupert and seven-year-old Vera handled themselves in the water: strong swimmers, confident with their mask and snorkel, staying close to the group… Well done kids! Some of the group were not quite ready to throw themselves straight into the water on Day 1 and instead enjoyed some family time on the sun deck: we’re sure there was a lot of catching up to be done and we find it so nice to see our guests enjoying the whole experience of being out on the ocean. After dinner, we headed out for a night dive at Hafeva. We only had a couple of takers but those who went did see a few cool creatures: a squid, HUGE decorator crabs, cowrie shells, emperor shrimp etc. Most exciting of all, we could hear whales singing close by, so loud we could feel the vibration too. 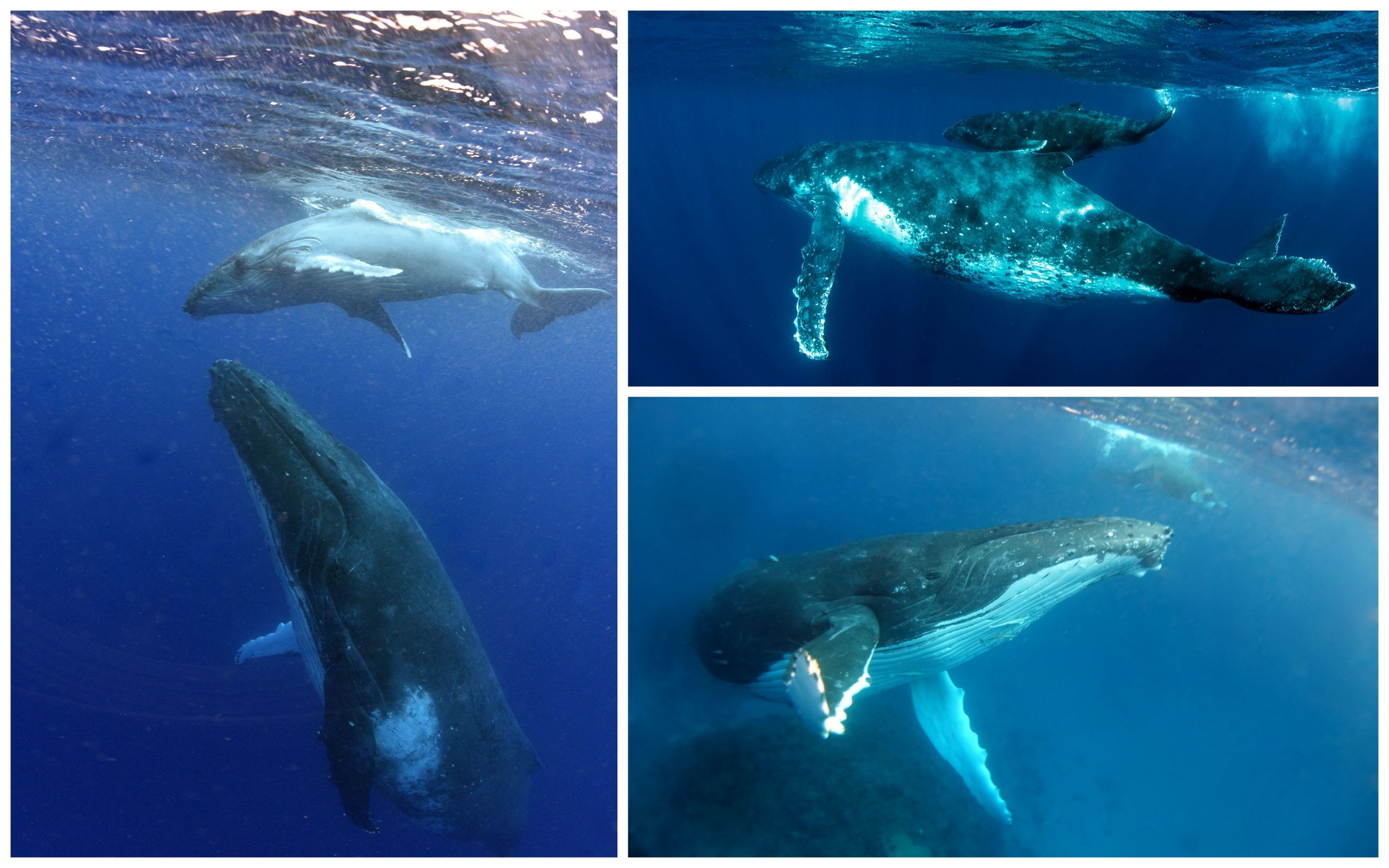 The next day, we began looking for humpbacks from the minute breakfast ended and were instantly successful: there were at least two pairs of whales just resting in the bay where we were anchored. Wonderful, we thought! What could be better? So, we got our wetsuits on and got out there. My goodness, did these whales give us the run around?? We spent over two hours out on the skiffs, literally going in circles as these cheeky whales stayed still just long enough for us to get ourselves in the water, then swam casually off a second before we got the chance to actually see them! We’re pretty convinced humpbacks have a sense of humour, and a wicked one at that. Over lunch, we moved up towards the island of Nukupule where we had much greater success. Everyone had fantastic encounters with mom and baby duos. It seemed the calves, particularly, were very much attracted to the kids, coming right up to them and looking them in the eye. Maybe there’s some secret inter-species kid language we adults don’t know about?! We anchored that night at Uoleva, a stunning setting with a long white beach and a spectacular sky as the sun went down. The whole salon was abuzz with great conversation during dinner – everyone so excited by the day’s events – and, from what we hear, the socializing continued long into the night! 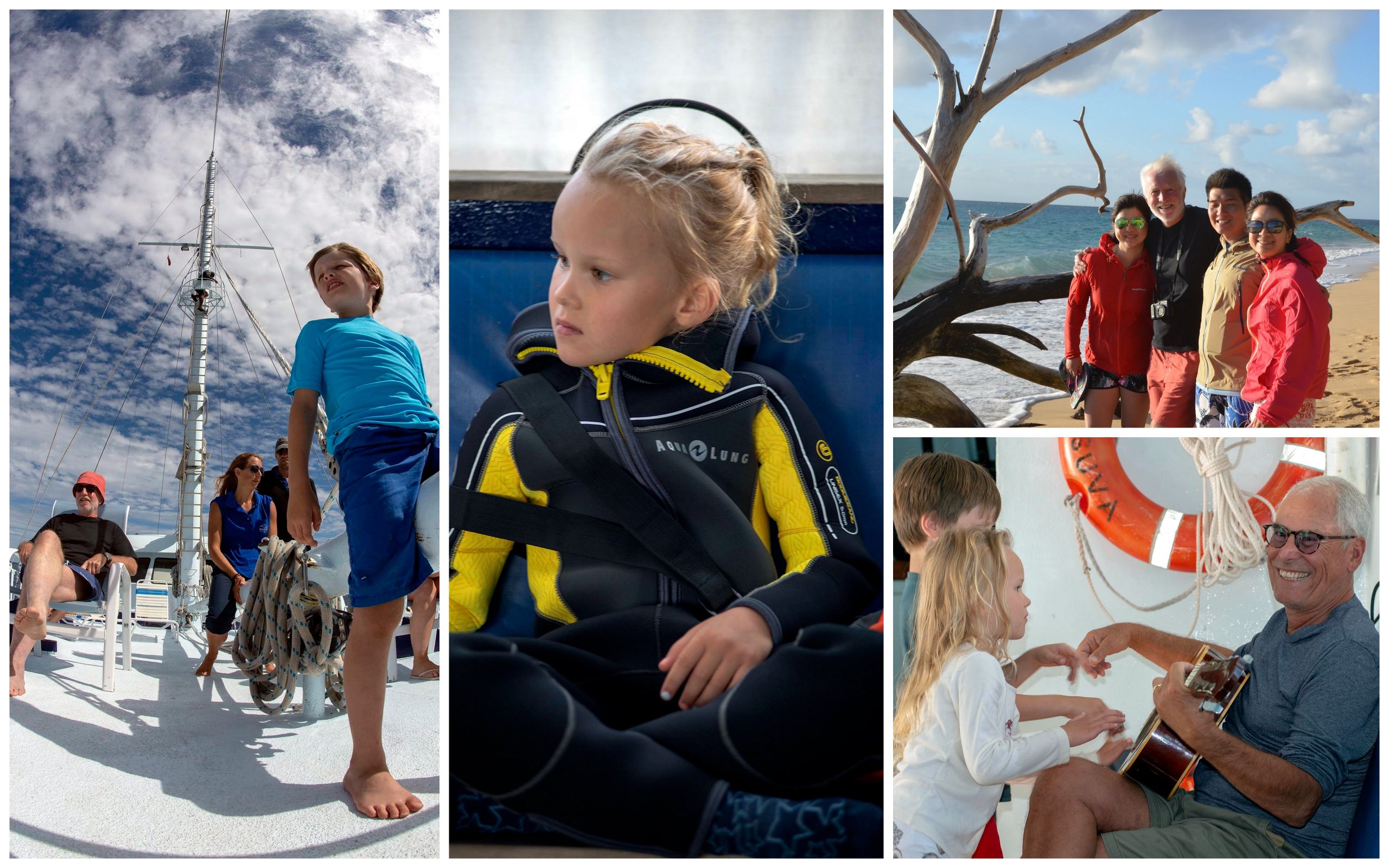 On the third day of our charter, we kick started with a little retail therapy, opening up the NAI’A souvenir boutique as we hauled anchored, moved out from Uoleva and started looking for cooperative whales. We ended up back at Nukupule again: it had been so successful the day before and proved to be so again today! Everyone went out after breakfast and didn’t come back until hungry for lunch. We were a bit concerned when the usually happy, headstrong little Vera came off the skiff crying her eyes out: had she not enjoyed today’s whales, had something bad happened? Turns out, the poor girl’s front tooth had fallen out whilst snorkeling: her first one ever, what a shock! She soon stopped crying and got pretty excited, however, when she learnt that maybe the International Tooth Fairy might visit her that night. After a quick lunch, we got right back out there and had a truly perfect afternoon. This was Wanda’s first proper time out in the water and she was so desperate to experience our amazing humpback whales:  oh boy, did Momma Ocean deliver! She had a young adult whale circling around her in crystal clear, shallow water, clearly as intrigued by us as we were by it. Then we found a super-curious calf! Mom was resting below, rising every ten minutes or so to breath but otherwise inconspicuous. Meanwhile, little one would ping right up to us, doing pirouettes as he came, then swim around us for a minute or two before going back down to Momma. Such a joy to be a part of! Even those back on the big boat were given quite a show, with a mom and baby dual breaching just 50’ away from NAI’A. By this stage of the trip – not even half way - we already had one guest remark he could leave now and be perfectly happy, he’d already got the photo he was desperate for! 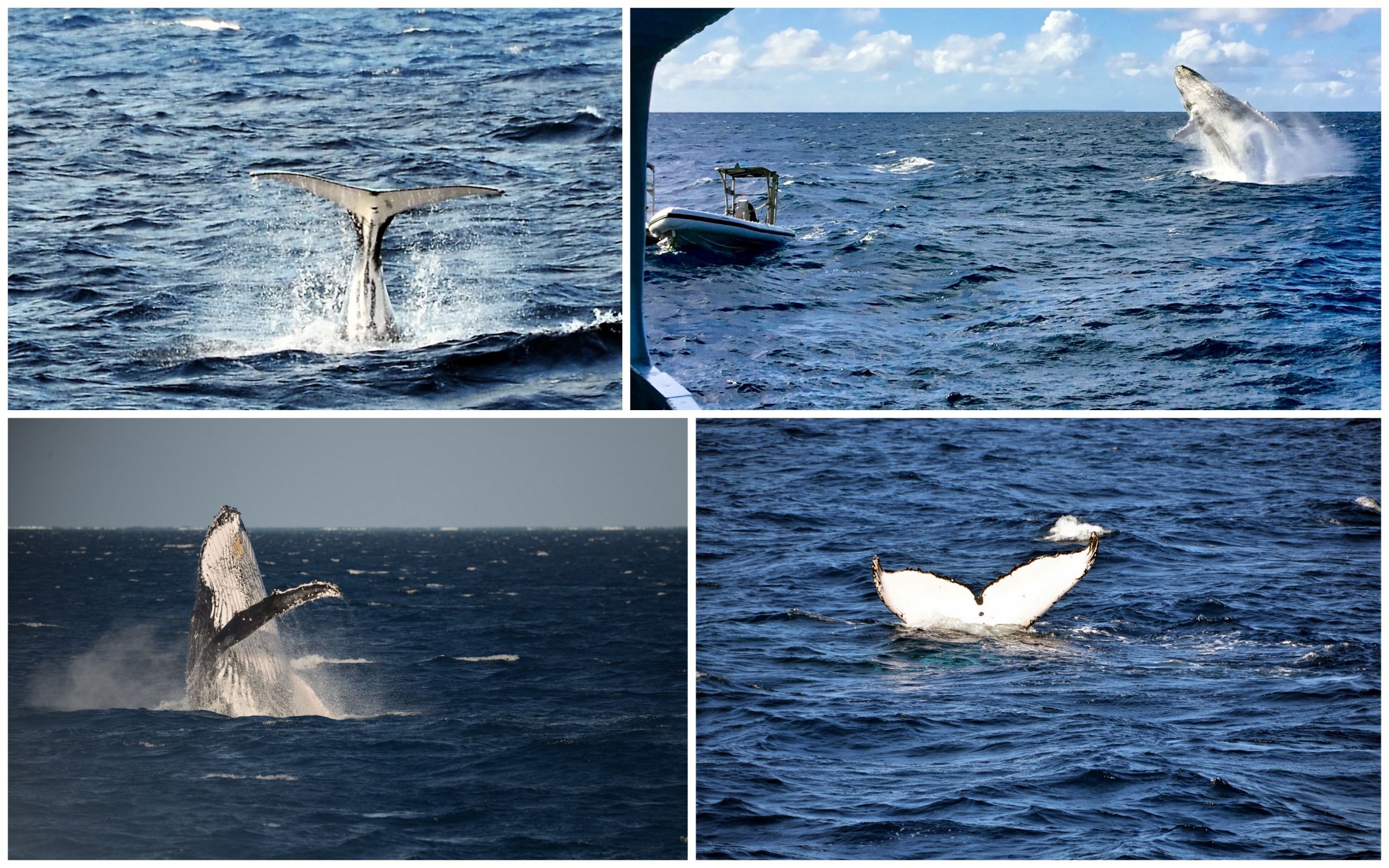 The next day we awoke to howling winds and lashing rain! However, by the time we’d had breakfast the squall had blown past and it was sunny and lovely. So, we took ourselves in to the beach on Hafeva for a little stretch of the legs and some fresh morning air. We were greeted by many pigs, piglets, dogs and cows! Once back onboard, we set off looking for whales. Sadly, we couldn’t venture far as the winds were still whipping and there were very limited areas we’d stand even a chance of getting guests in the water. But such are the highs and lows of swimming with whales: one day can be spectacular, the next a real struggle. We did try getting one skiff out to check out a lone whale but it gave us the run around and everyone came back still bone dry! There’s always a silver lining, however: this time it was spotting a cute green turtle breathing at the surface, not something we see often here in Tonga. Concluding that spending time on the skiffs just wasn’t an option, we decided to head right into the heart of The Playground on the big boat and see what surface action we could find. After cruising around for an hour or so, we found two large adults and slowly started pursuing them. Wow, did they decide to show themselves off to us! BOTH of them started breaching, one after the other: again, and again and again. What made it even better was that one had a totally white belly and the other had a totally dark belly, so it created an incredible yin and yang effect as they took turns leaping into the air! Now THAT’S what we call surface action: thank you whales for ending our day perfectly! To celebrate a successful day, an impromptu kava party broke out on the dive deck after dinner, with our three musical kids as the stars of the show. 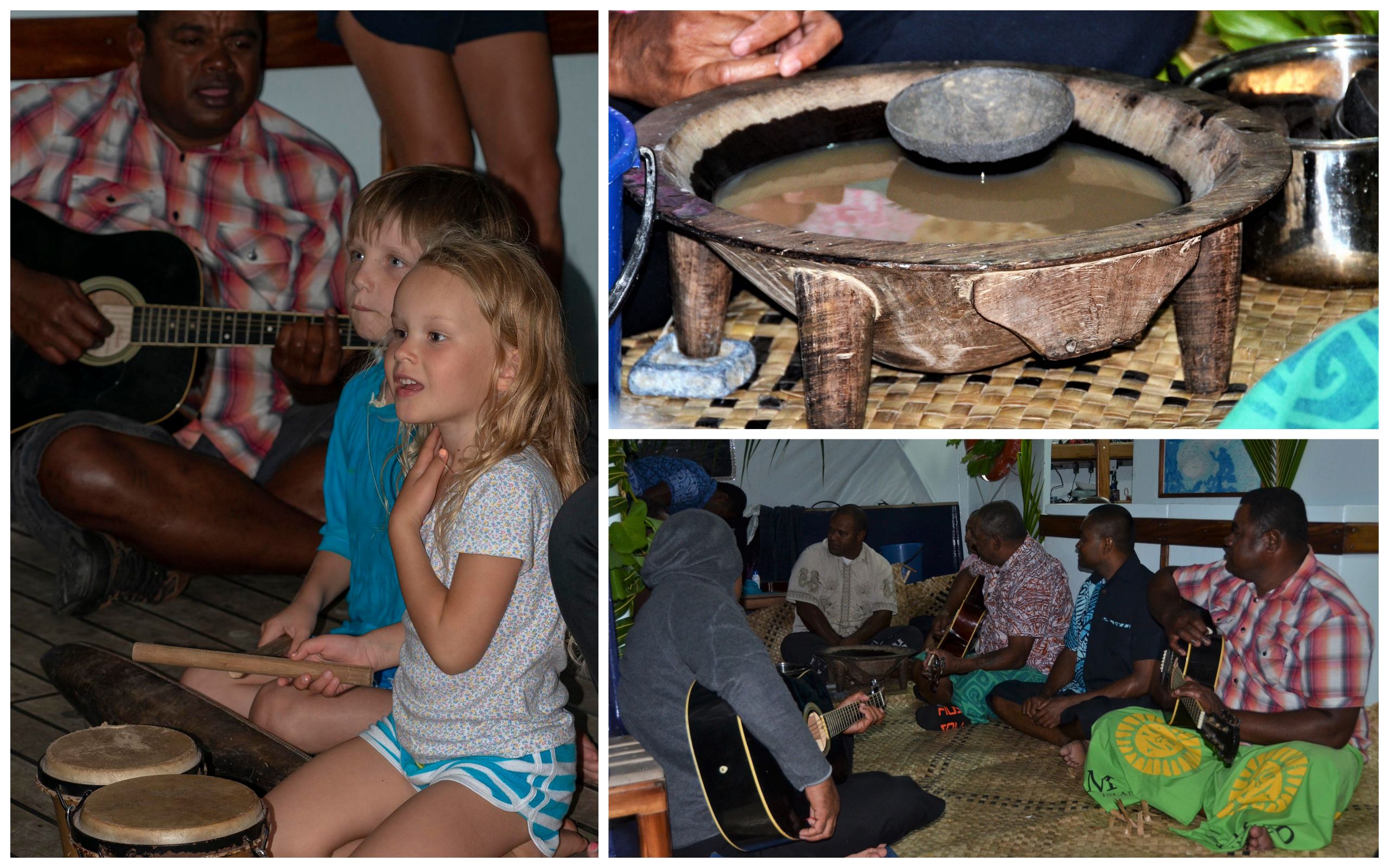 The next day, we were faced with more strong winds and really had to fight hard to find whales: they’re elusive at the best of times but with huge waves and white caps, even more so! After not too long, however, we did find the most wonderful trio: mom, calf and escort ALL breaching repeatedly! It really was quite the show to see such powerful acrobatics and lifted everyone’s spirits considerably. Later that day, we decided to head out for a dive at Ladd’s Reef: we had a lovely time with gorgeous visibility, whale song ‘playing’ in the background and a beautiful hard coral garden to explore.

We stuck around Lofanga and Nukupule the following day and had a wonderful time. The morning started off a little slow in terms of whales so we threw a few people in for a bit of a snorkel instead. It was all going swimmingly until Ru got bitten by a cheeky little fish! However, the lad loves all animals and swore that even if a shark bit his head off he’s STILL defend it: good boy, we love hearing young ‘uns defending our beloved sharks! Towards the end of the morning, we struck gold, finding a wonderful mom and calf, just sitting still and begging to be enjoyed. This was Caroline’s first experience and what a perfect one it was! Thanks again Momma Ocean, you always provide. That afternoon, the winds picked up and made it tough to get out on the skiffs. The hardy pushed on, however, bouncing along over the waves for a couple of hours. They were rewarded at the final hour with another mom and baby, just as we were about to give up and head to our anchorage! Late that afternoon, we found shelter and hunkered down for the night. An ideal time to enjoy our official Kava Party! Everyone had huge amounts of fun, singing along, joining in with The Animal Song and indulging in a few kavas. We heard reports of very lucid dreams the next day, involving frogs if we remember correctly…. 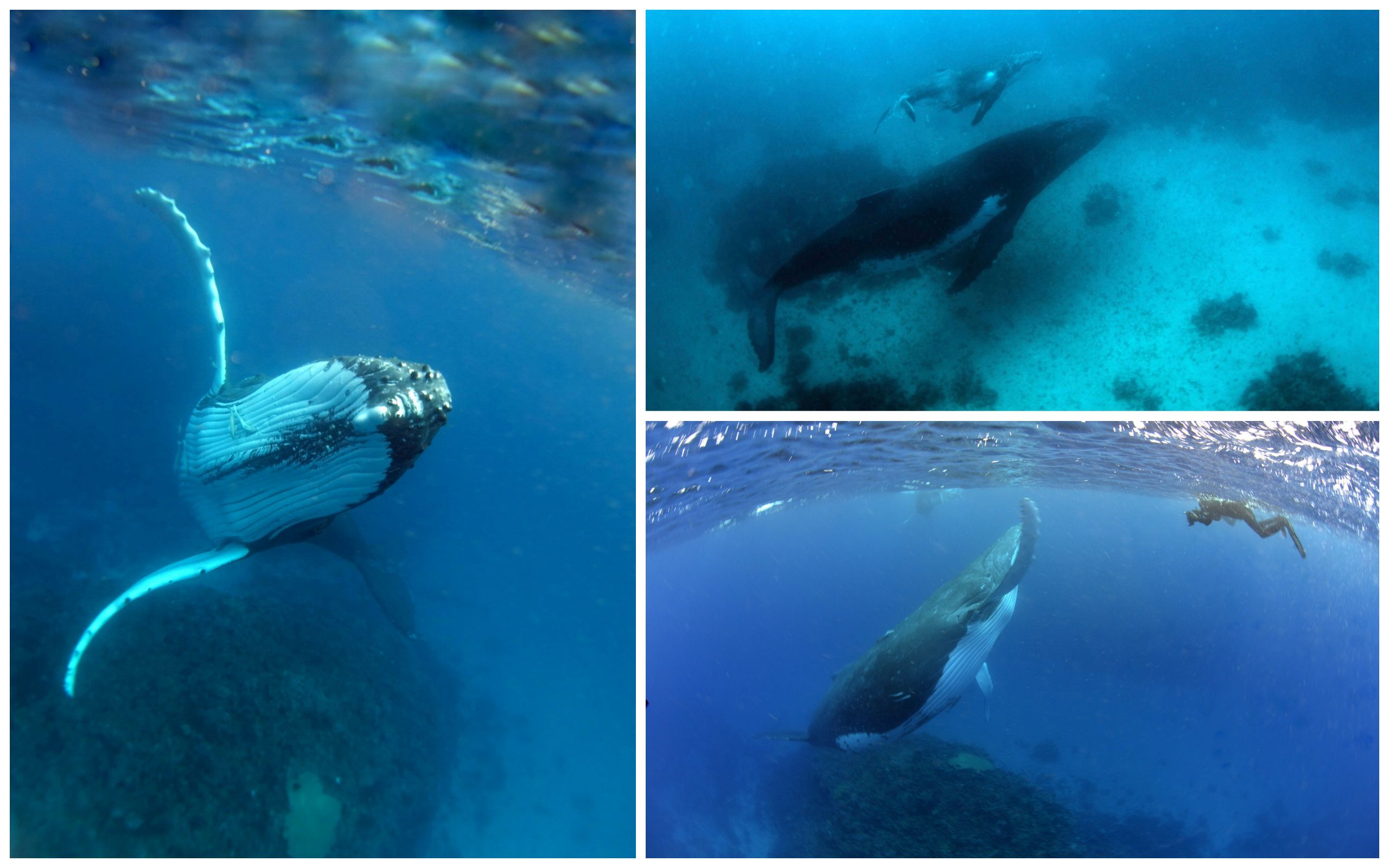 Over the next couple of days, we mixed whale watching in the extreme wind with multiple other activities: we’ve got to make sure we keep those kids’ energy levels in check! We enjoyed some very good surface activity (including a mobula ray just cruising on by!) and we also got out for a great snorkel over a colorful shallow reef and enjoyed a good, long beach walk at Uoleva. The kids even scored some free fresh coconuts!

And so, we came to the end of a FABULOUS trip! A heartfelt thank you to all who joined us, you were such a pleasure to have onboard, truly making the most of life at sea. Do come and see us again soon! 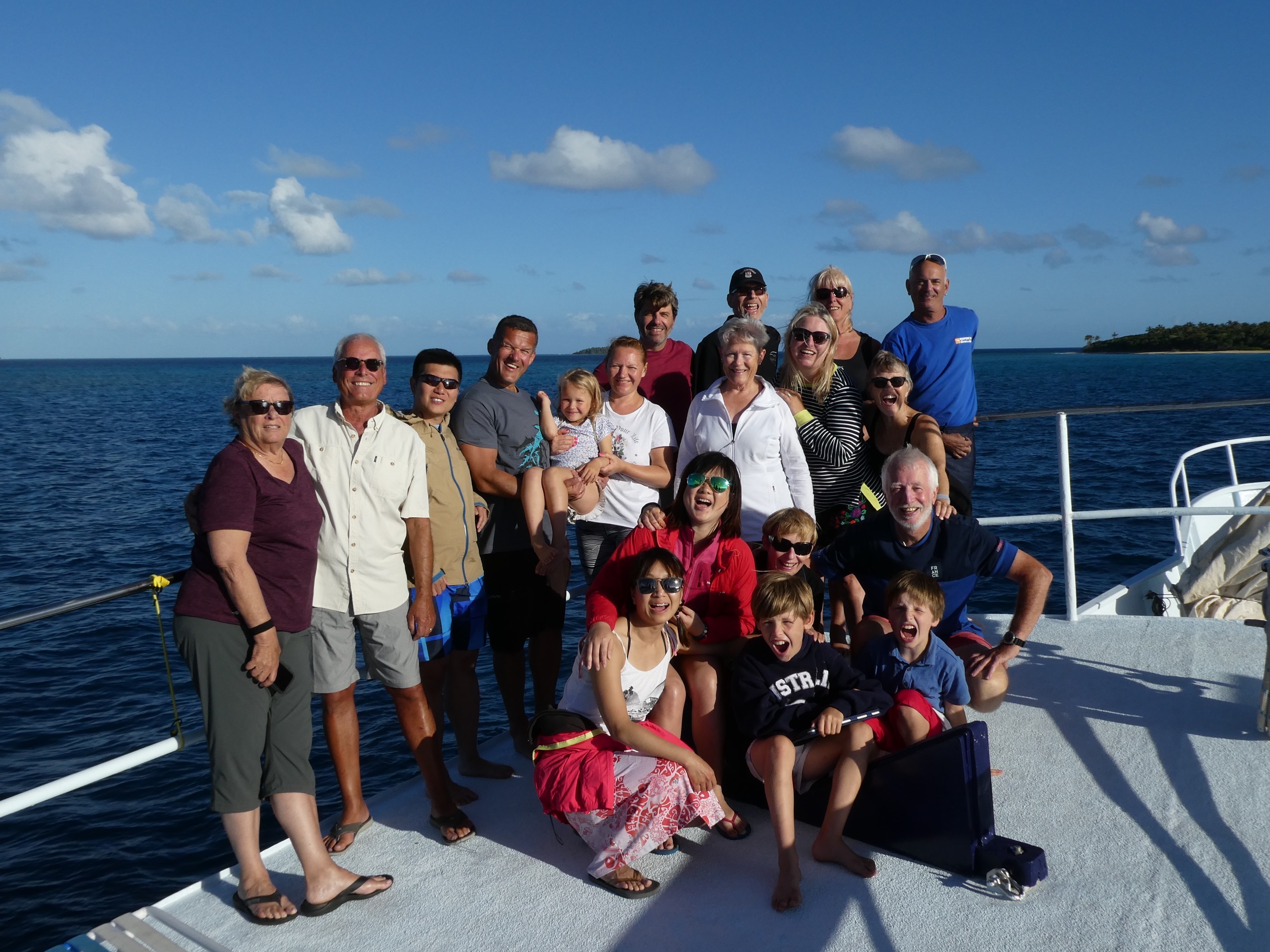 "Bula to all the NAI'A crew! Can't imagine a better crew and cruise." Jim & Deb

"There are no words to say how incredible this trip was... the crew is beyond belief..." Wanda & Dom 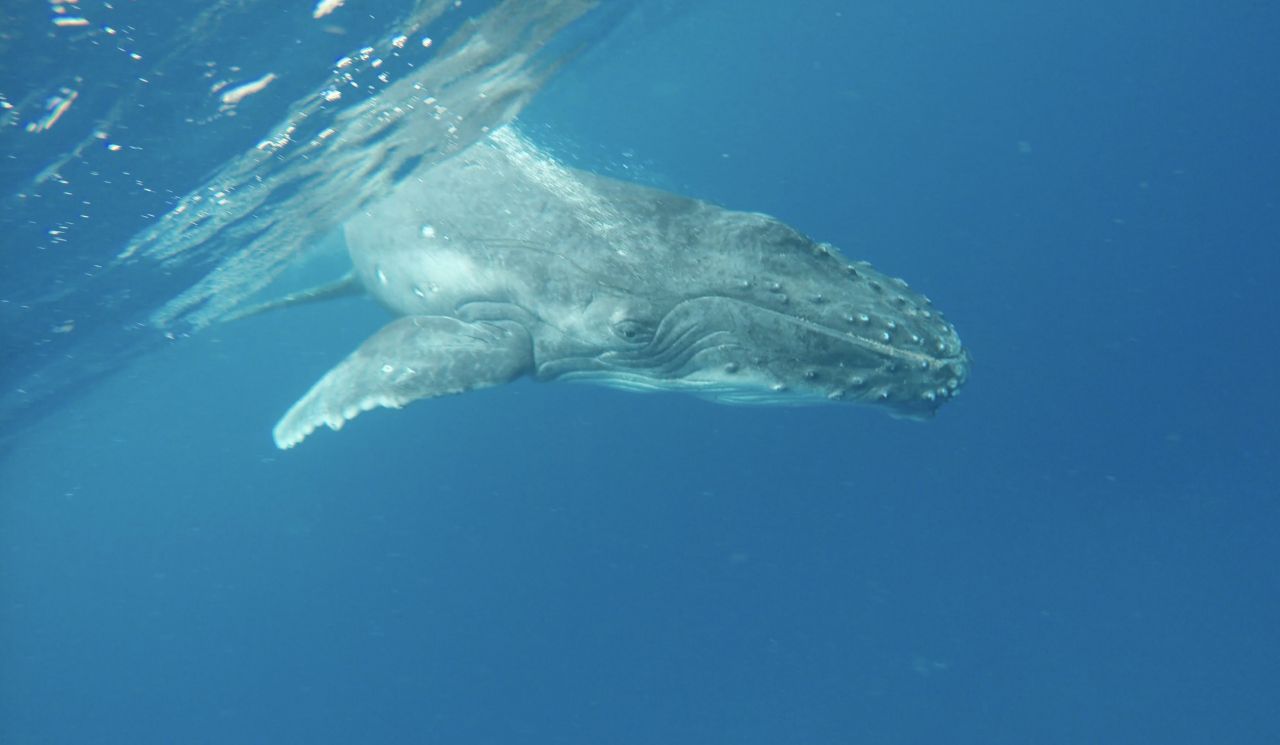 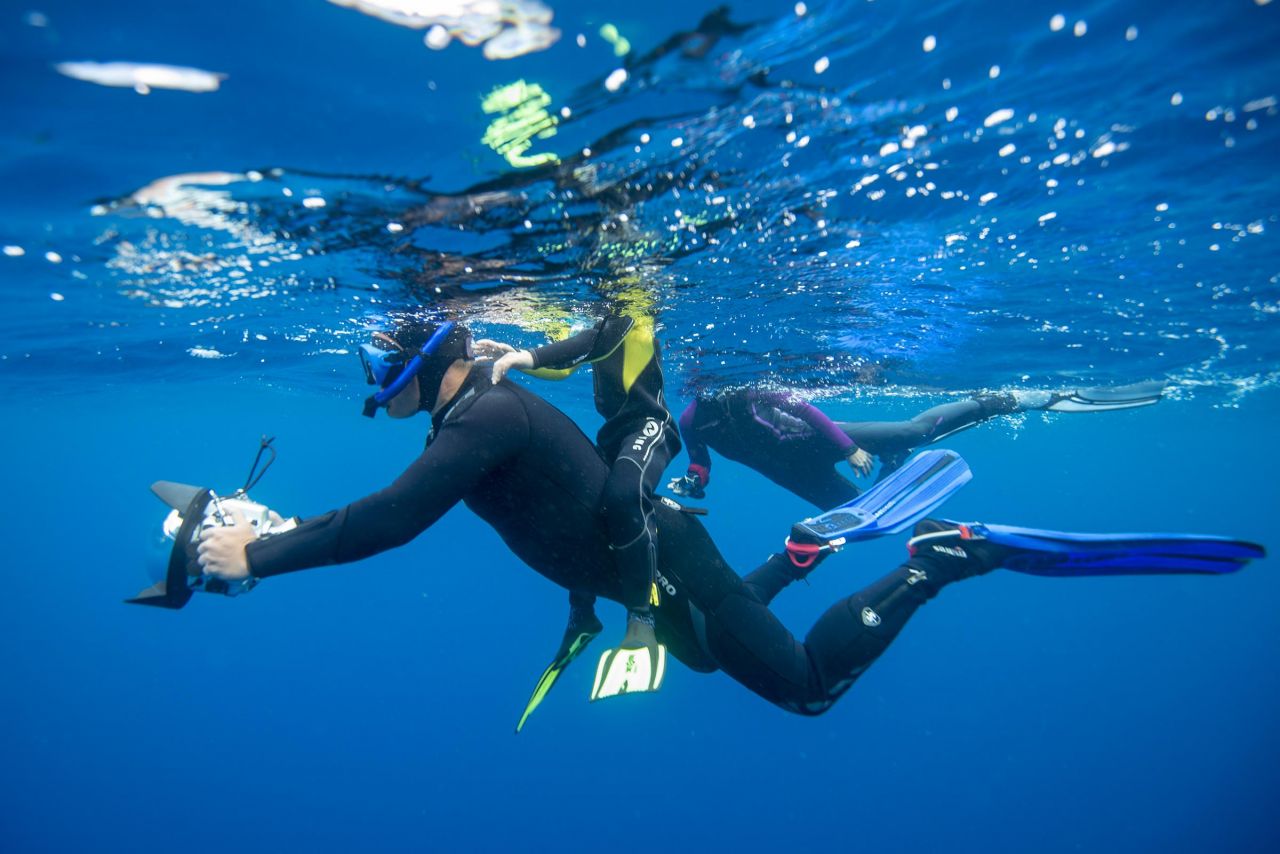 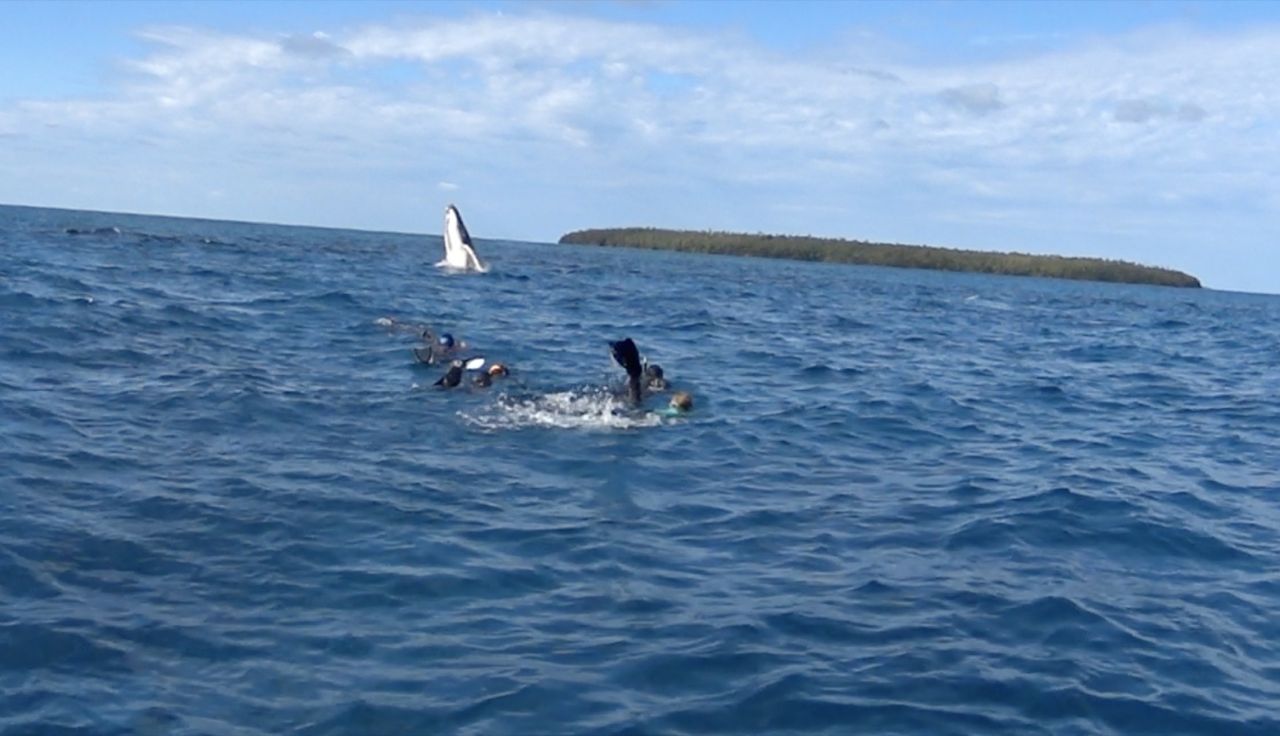 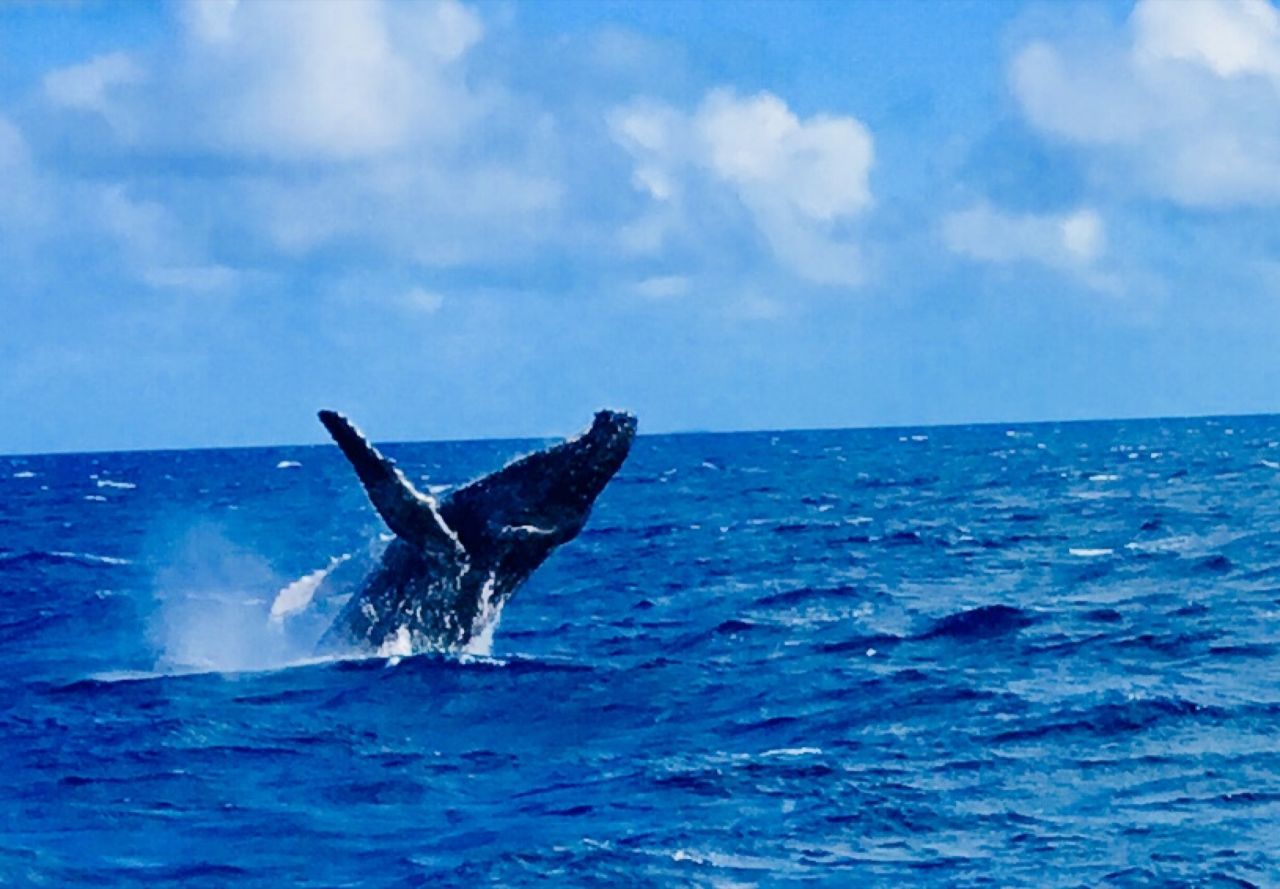 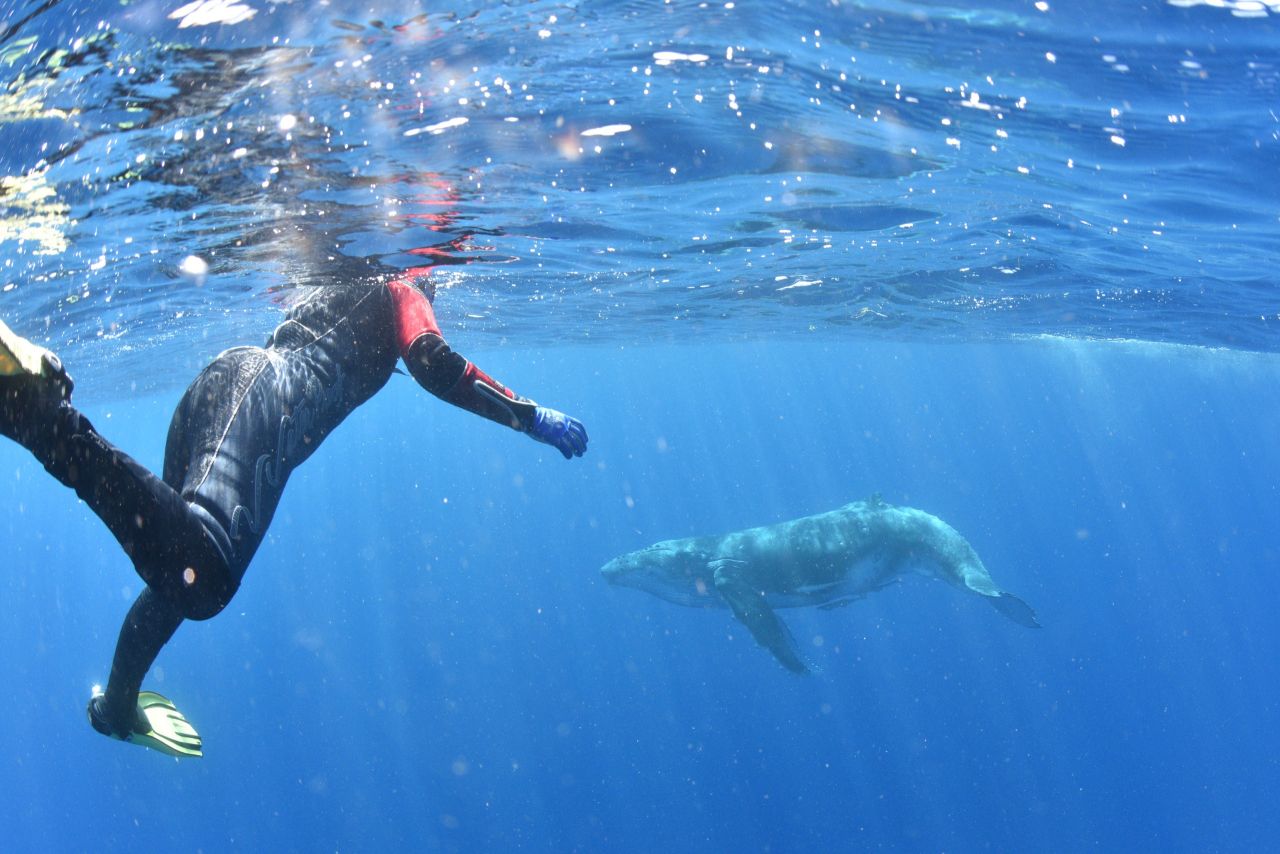 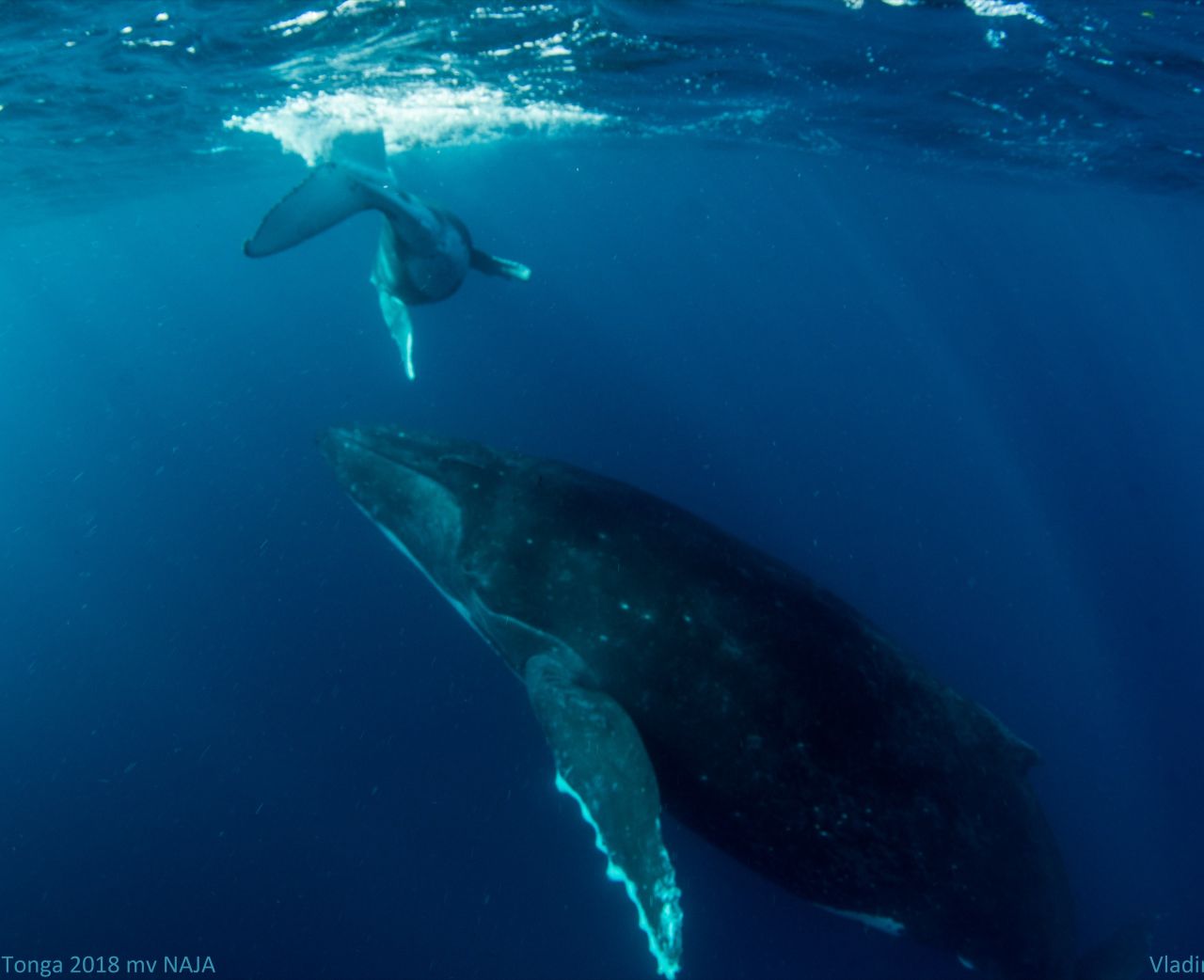 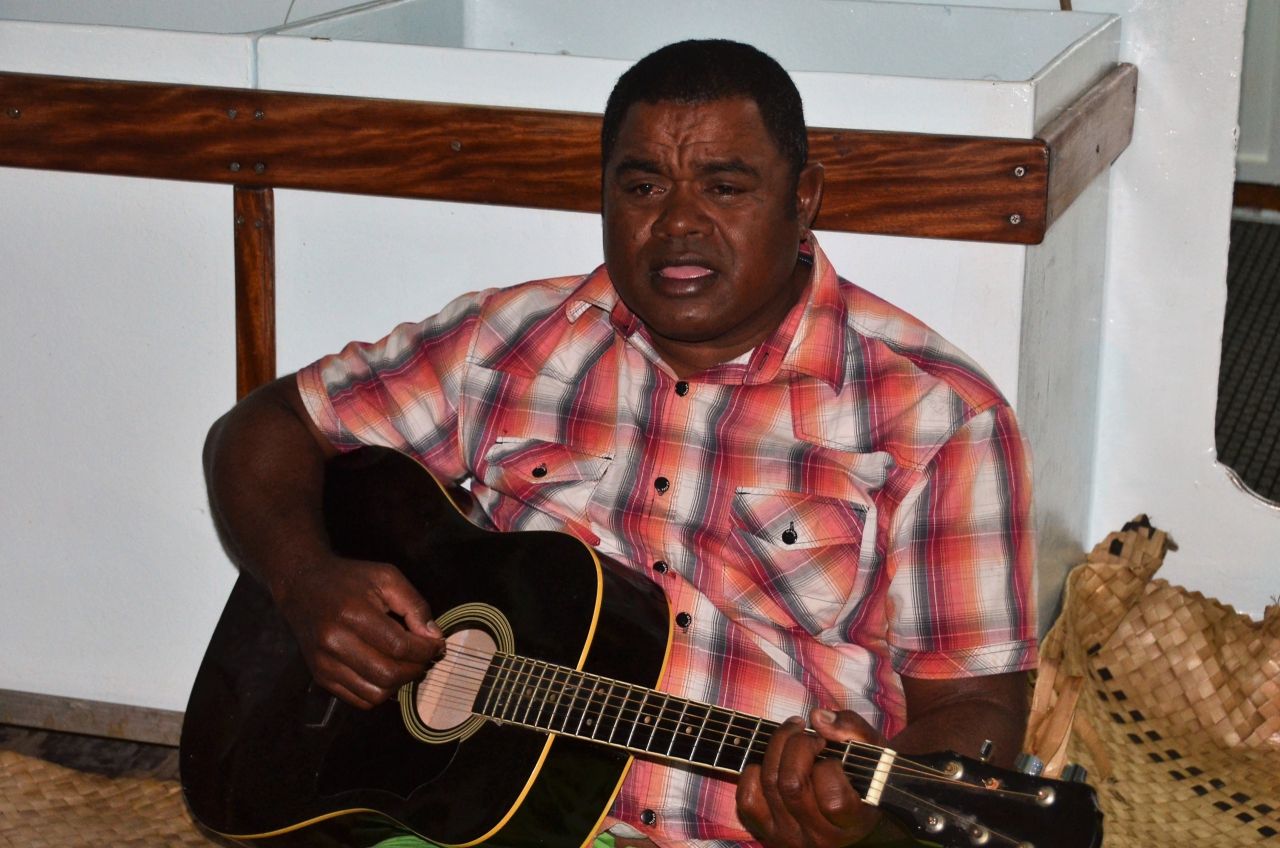 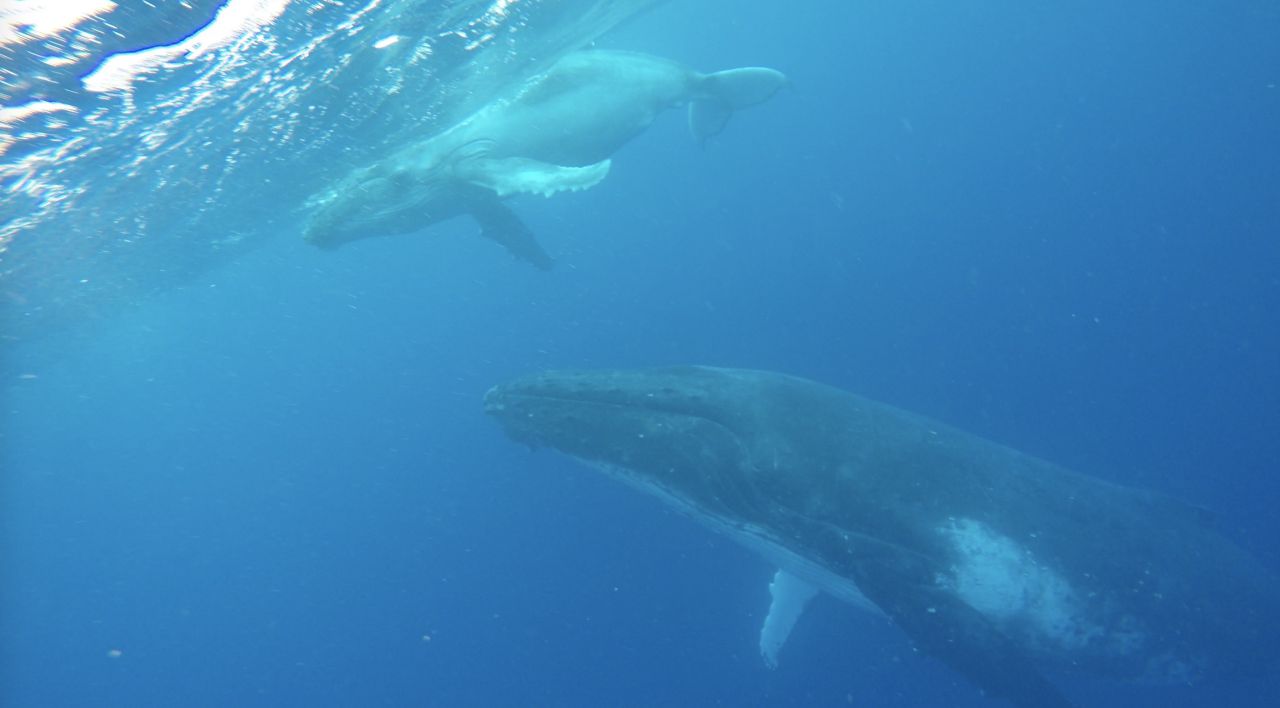 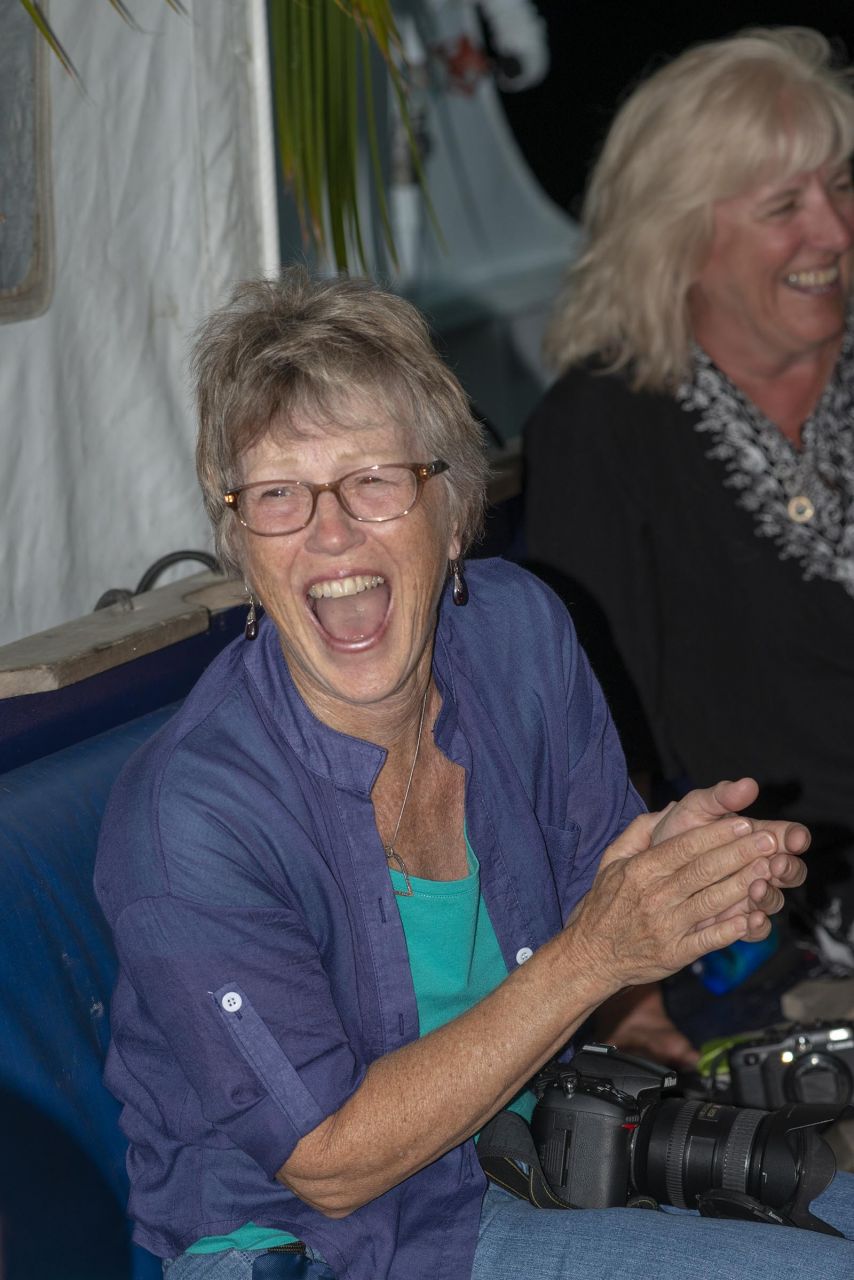 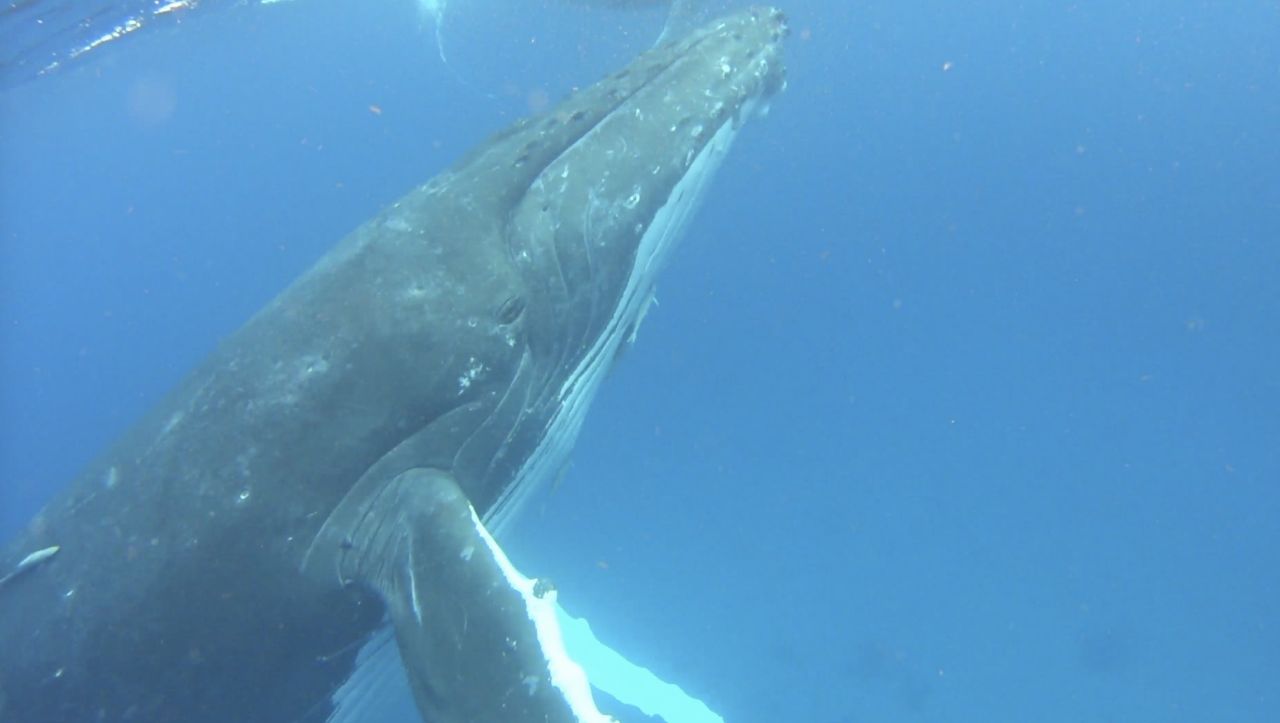 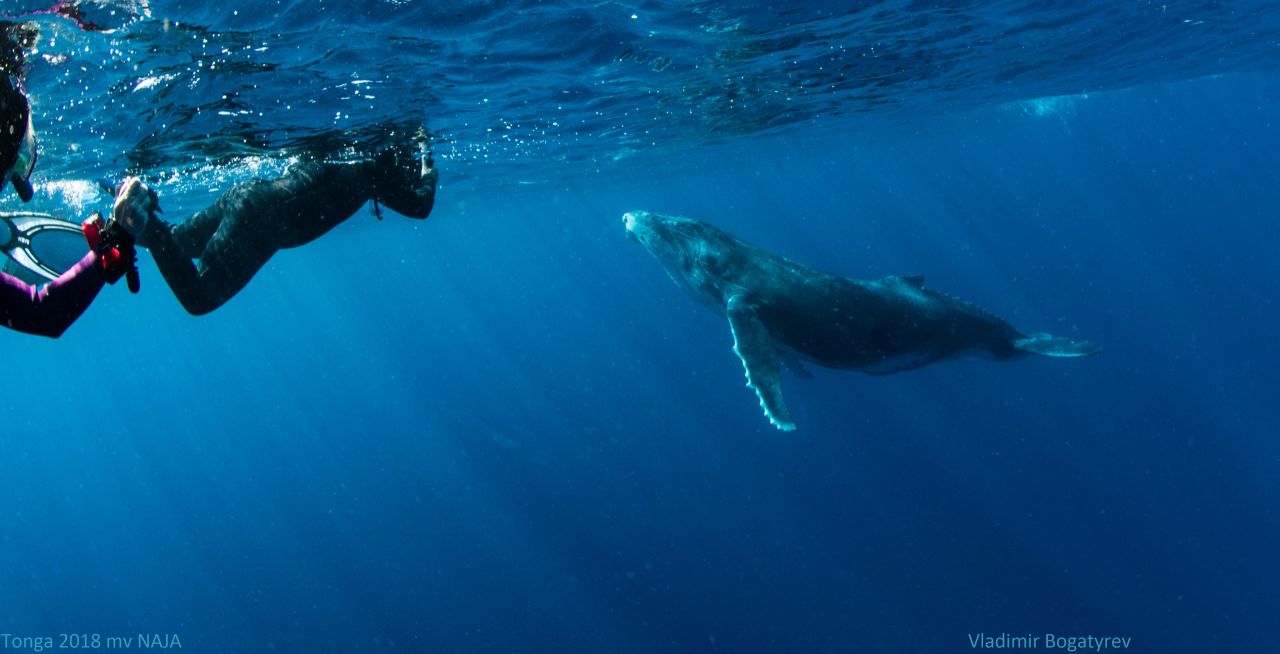 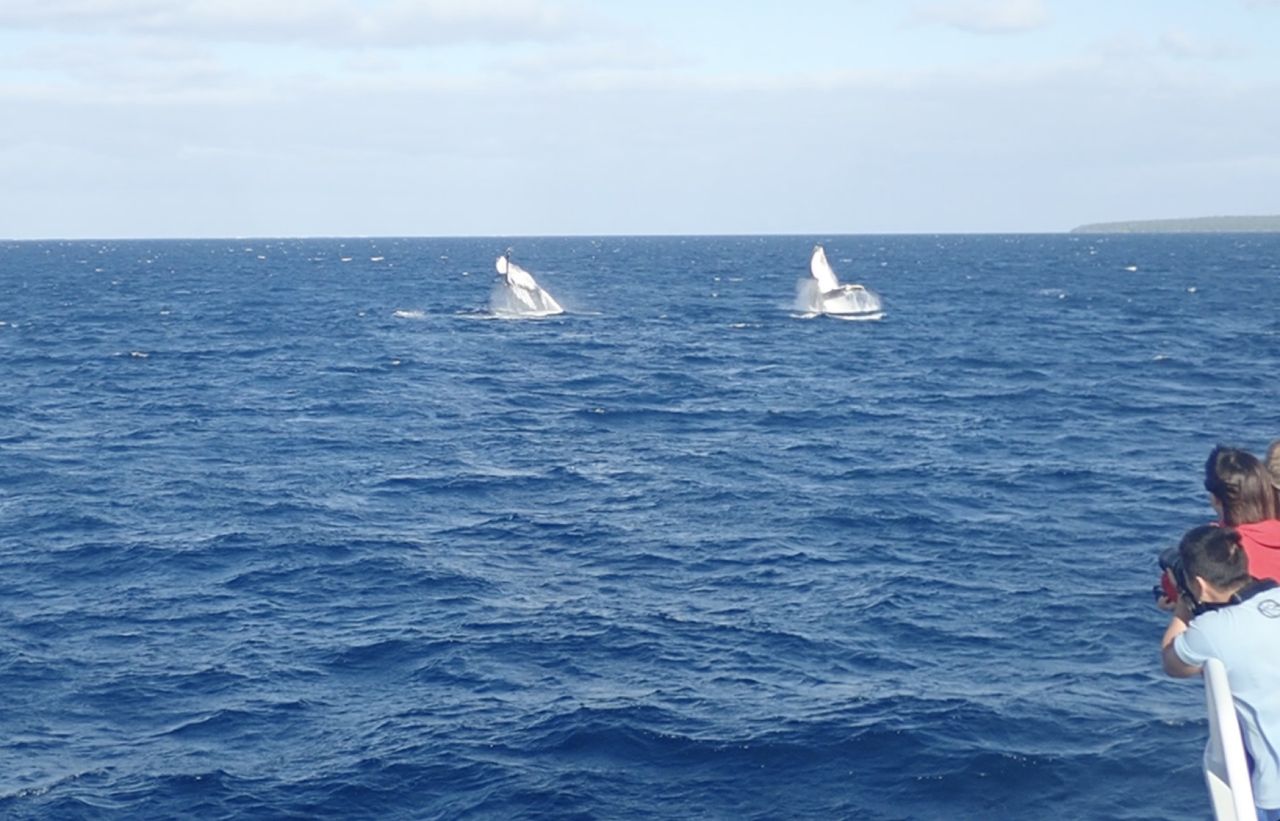 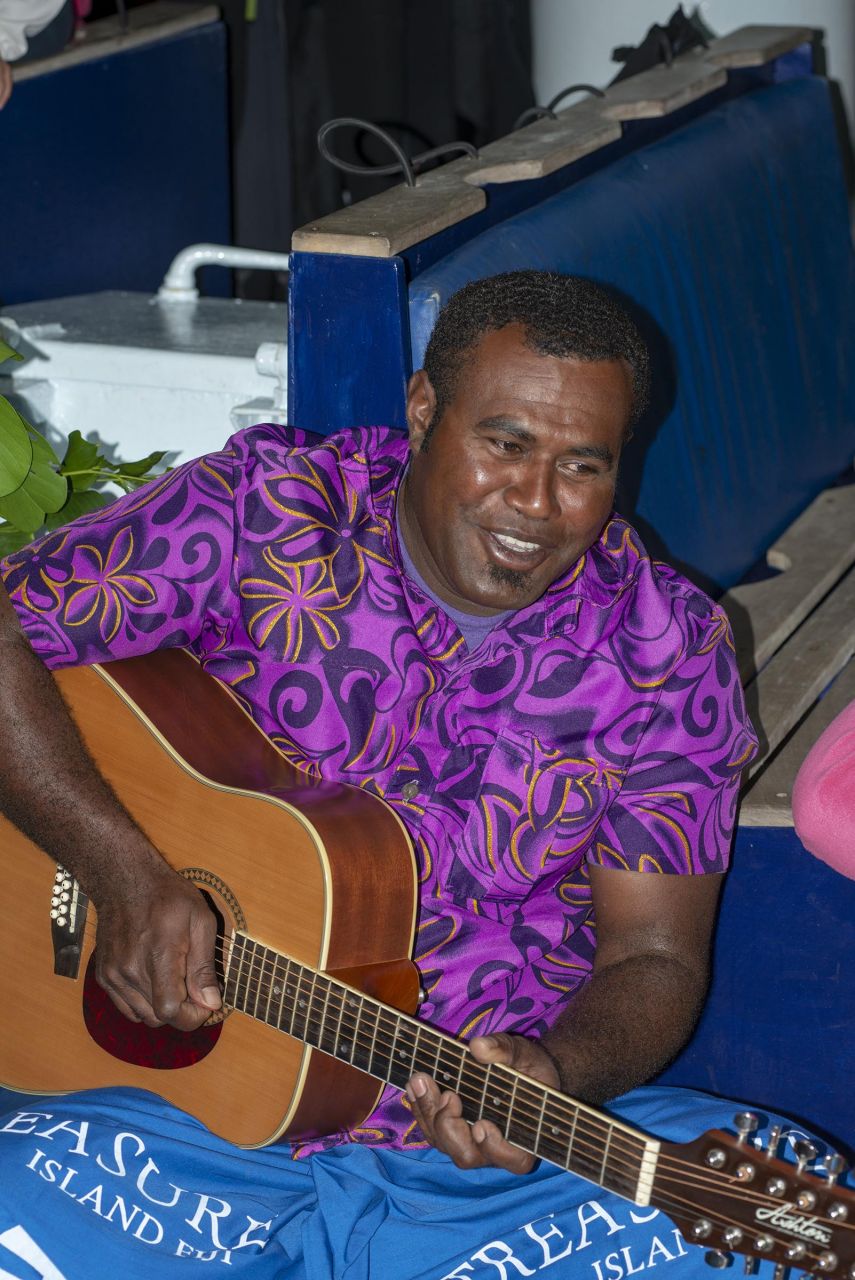 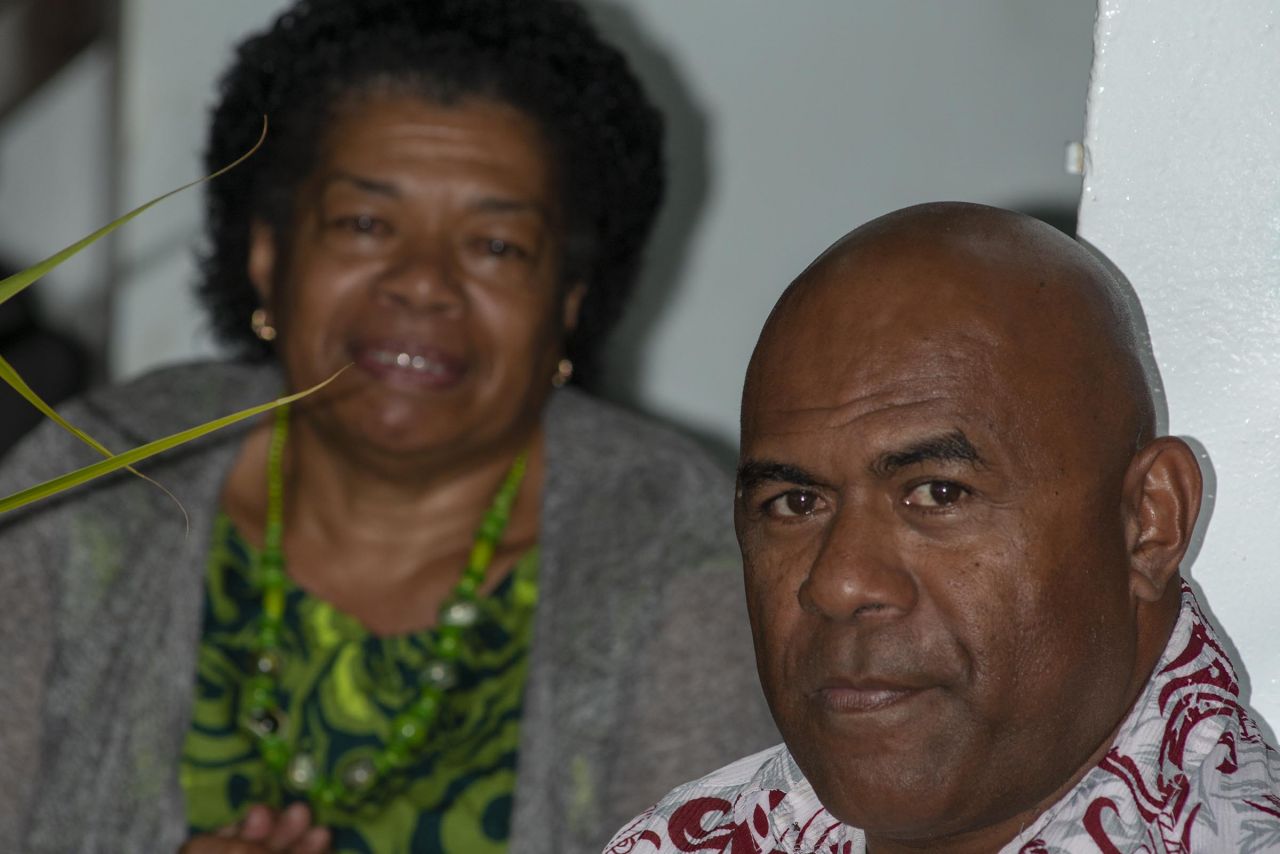