Sadly our Tonga Humpback Whale 2018 season has ended but, oh my, what a season it has been! We’ve had the closest and most personal encounters we could ever dream of, been privy to behaviors we’ve never witnessed before and watched surface displays more impressive than the Cirque Du Soleil. We leave Tonga with heavy hearts but with memories to last until the 2019 season. 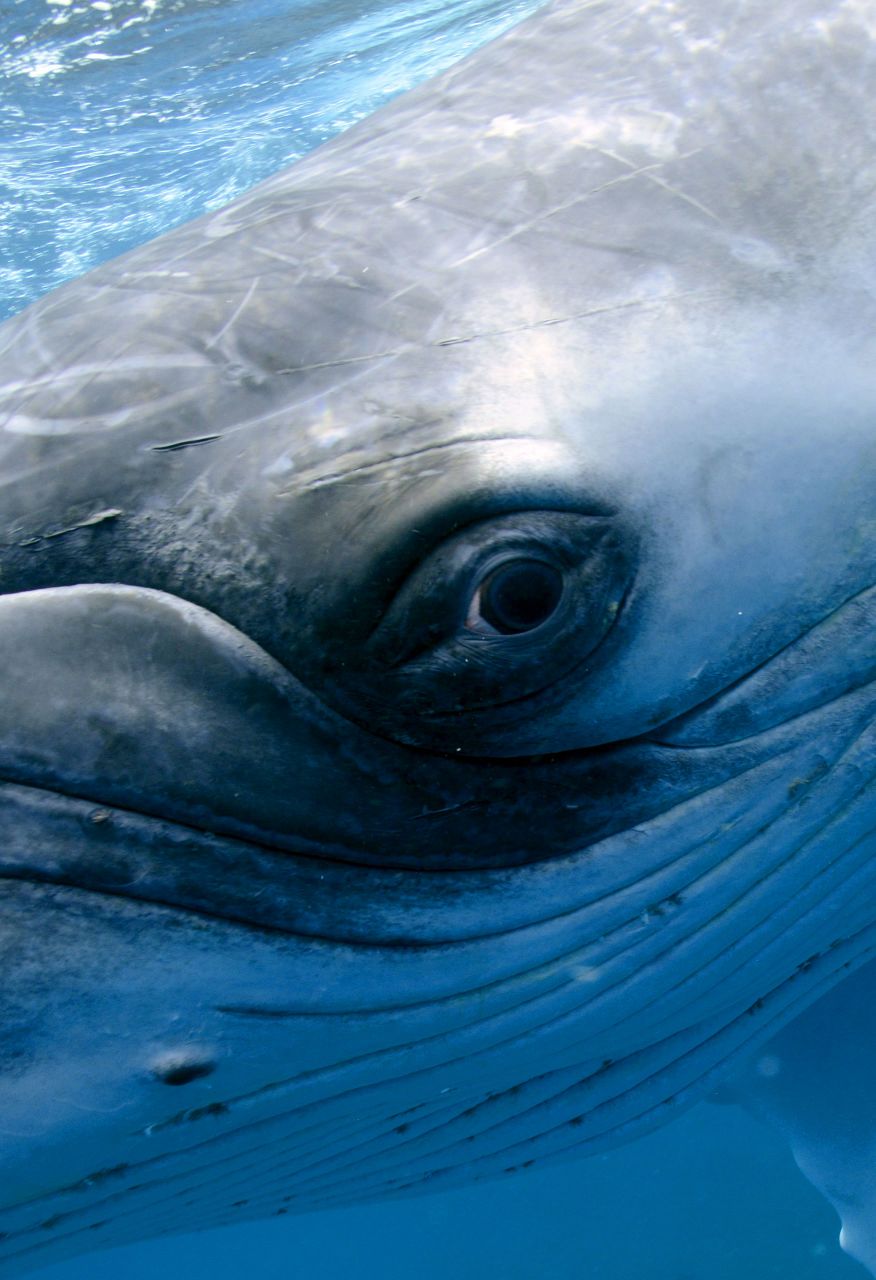 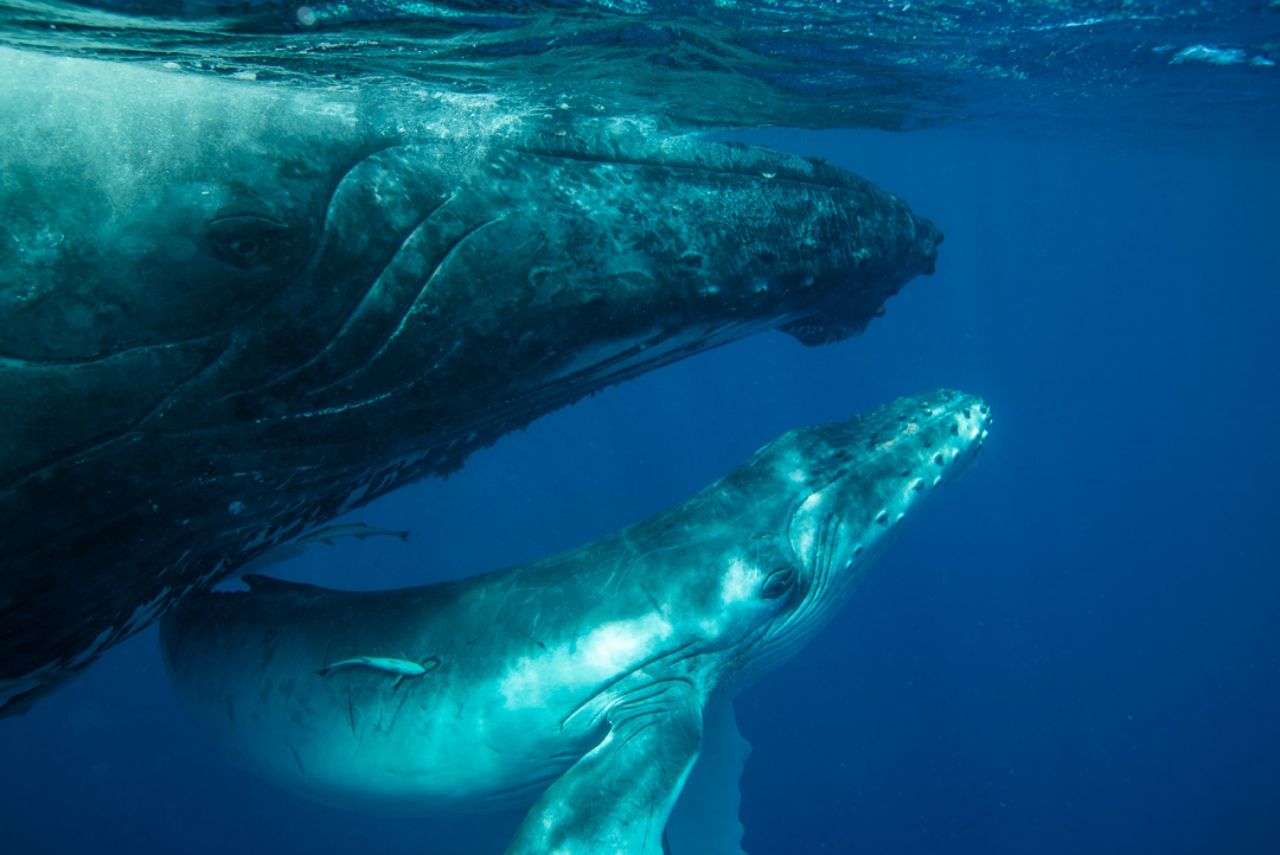 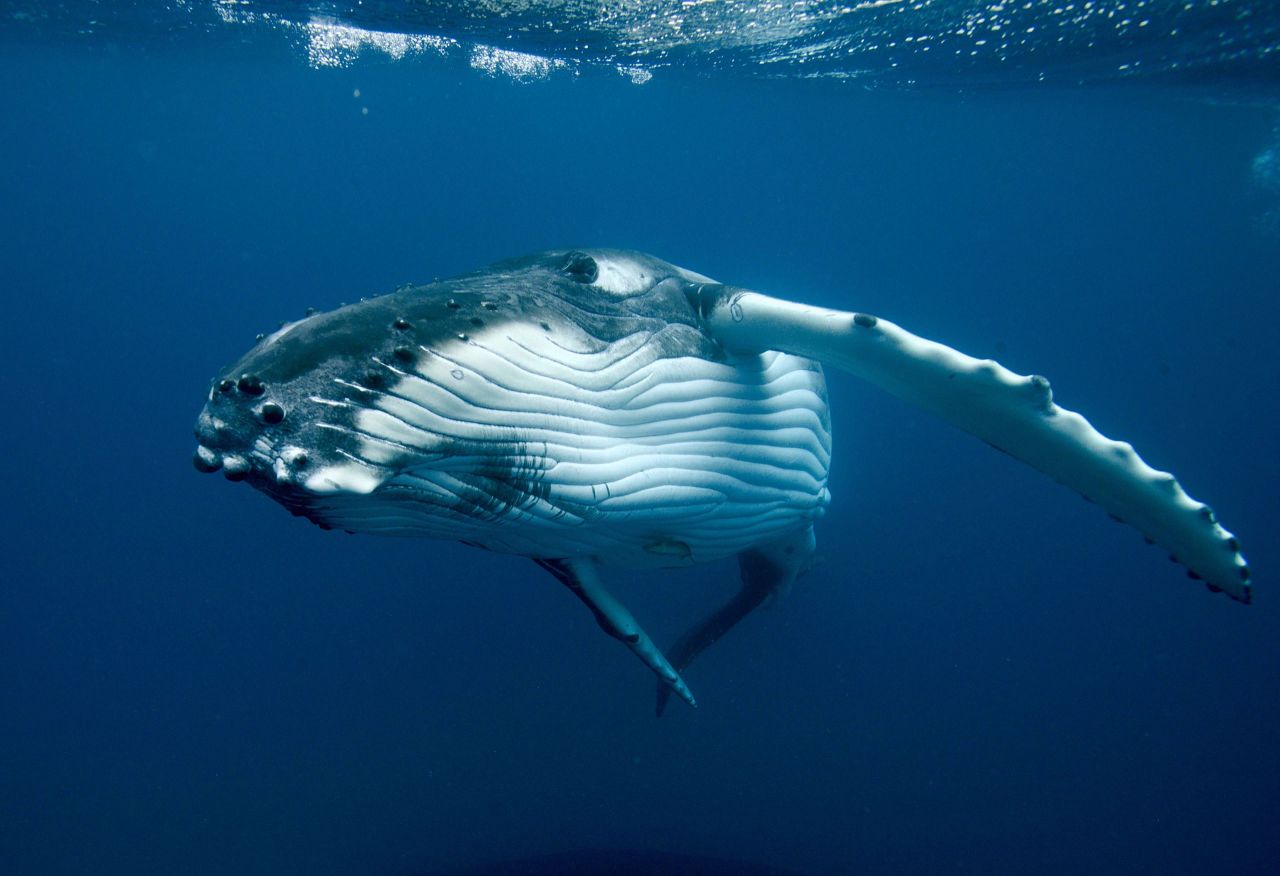 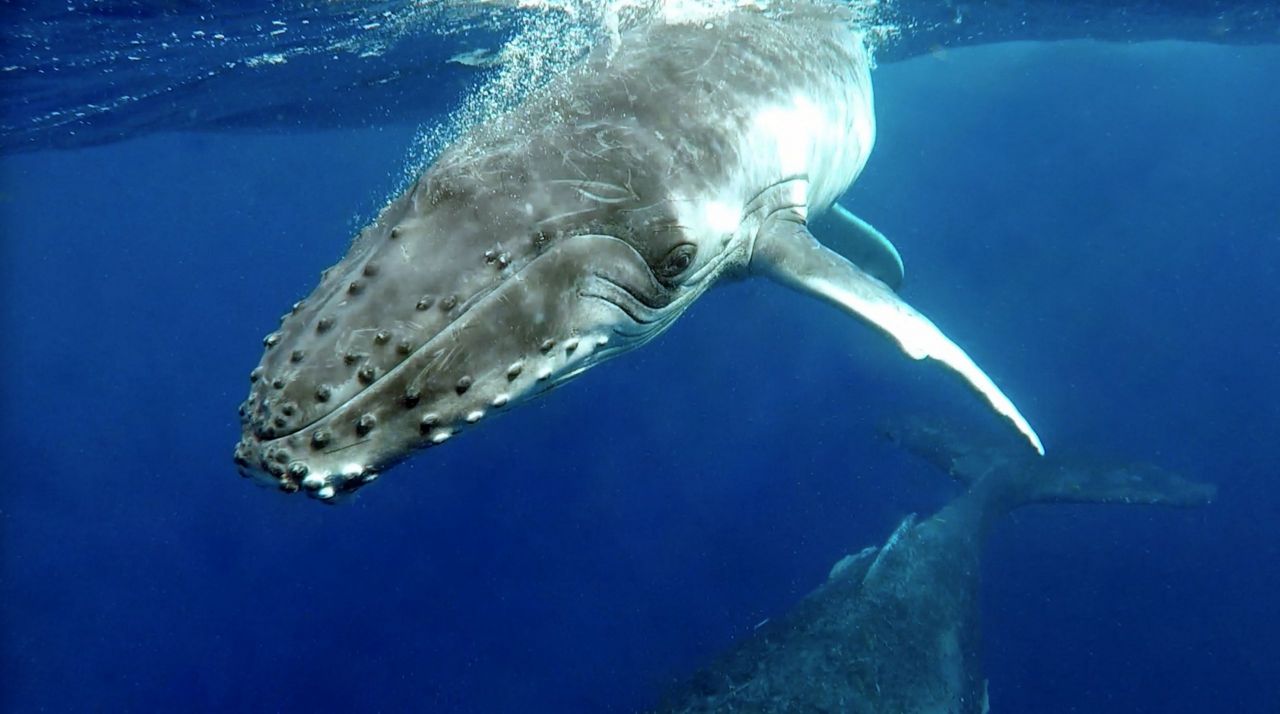 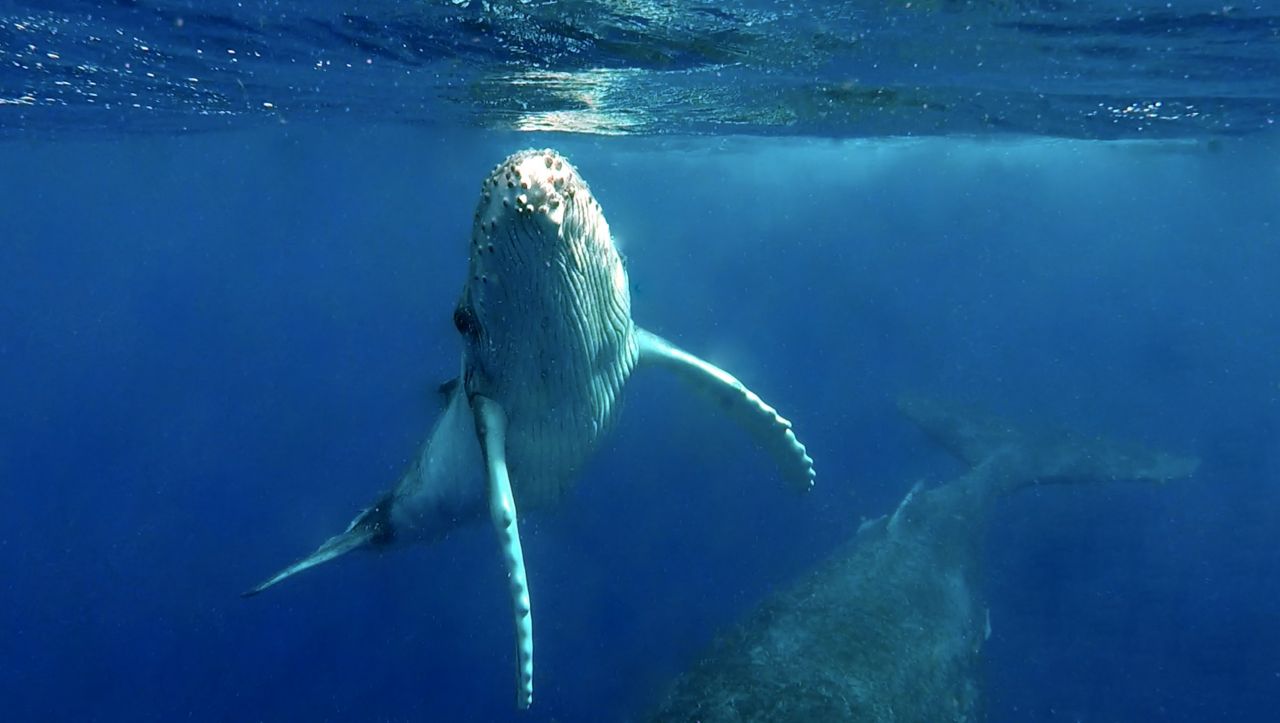 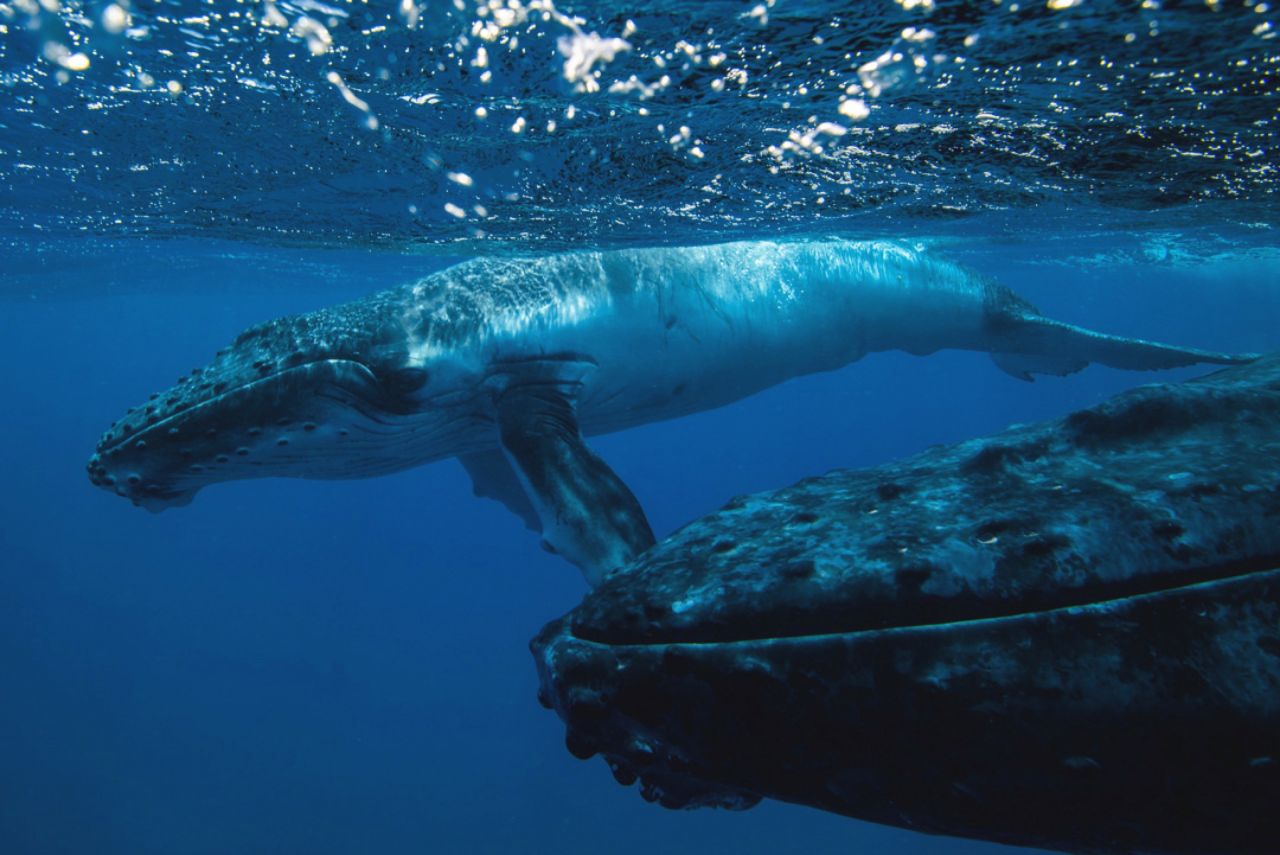 For this final charter, we welcomed onboard a lovely group of guests. The vast majority had all been on NAI’A in the past for our scuba diving tours in Fiji. In fact, some of them had been onboard way back in the very early days of NAI’A, before the boat had even begun her ventures into Tongan waters! We knew we would be facing some tough weather conditions during this trip, so we briefed everyone on day one that it was going to be hard work but that it would be worth the effort: that you’ve got to be ‘in it to win it’. My goodness, were these people up to the challenge! What a marvellous bunch of high-spirited, positive, energetic individuals, getting stuck it and never letting an opportunity slide. Go team!

Our first day up in the Ha’apai region was just spectacular: we really hit the ocean running! We spent the morning cruising around ‘The Playground’ and enjoyed some of the most impressive surface displays we’ve ever seen: over two hours of non-stop breaching and pec-slapping and peduncle throwing. We’re pretty sure we saw every move in the humpback’s book of tricks twenty times over! In the afternoon, we got everyone out onto the skiffs and had the best mom and baby interactions imaginable. Each group had a (pretty huge!) baby overcome by inquisitiveness and coming right on in to check us all out. These ‘little ones’ were so inquisitive, in fact, that we had to do some serious back-peddling to get out there before they careered into us full force; they might just be babies but they’re several tons worth of baby! Everyone came back from the session overjoyed. Listening in to their excited chatter afterwards, we overheard comments such as ‘the best experience of my life’, ‘the closest encounter in 25yrs of diving’ and ‘I could go home now and already be happy’!

We woke up the next day at Uoleva and the strong winds predicted for later in the trip had arrived a little early! We did manage to get one of the skiffs out mid-morning and they put in a stellar effort. They spent three hours bouncing around on the skiff looking for whales they could swim with and it did eventually pay-off: they eventually found a super-peaceful mom and calf and managed to spend a dream 90 minutes with her. After lunch, the other skiff got on out there and gave it their best shot. Alas, without success! Given the poor surface conditions, we made the executive decision to get everyone back on the big boat and spend the latter half of the afternoon motoring over the playground towards Ha’afeva looking out for surface activity. This turned out to be a great decision as we came across an impressive bull run with multiple males fighting and showing off. It all began with a single whale breaching repeatedly right beside us. Then two more came charging in, and soon after another two joined the party! So, we had five huge individuals charging through the water, taking it in turns to preach, tail slap, pec slap etc. It was a great finale to the day; we had to draw ourselves away to find safe anchorage before dark. That evening, after dinner, we offered our first night dive of the trip and had the grand total of one taker! He came back with reports of incredible whale song, just amazing to hear whilst underwater: it seems to totally surround you.

The next day, we departed Ha’afeva and headed up towards Lofanga, hoping to find some whale action in the lee of the island. And we did (phew)! Both skiffs got out mid-morning and tackled an absolutely mammoth session. We were all aware of the bad weather forecast for the coming days and were of the mindset to take chances whenever and wherever we could get them. So we ended up out there with several pods for a full five hours, with only a quick pit stop for an on-skiff snack of fruit and cookies! We sure put in the effort and were rewarded with all sorts of special encounters. We had a few gorgeous fly-bys: short but sweet glimpses of a beautiful mom/baby/escort trio cruising casually over a super shallow reef in lovely clear water. We were lucky enough to hear some incredibly loud singing, so strong it was vibrating through our chests. And we also enjoyed a cute mom and ‘weaner’ duo (likely a calf born end of last season and getting close to leaving his momma soon), resting side by side in the water below us and once in a while rising up to breath. It was a tough but satisfying day and we so appreciated everyone’s good spirits and hard work: thank you all!

We woke up the following day to howling winds, the peak of the stormy weather. We tried and we tried and we tried all morning but with no success. We snuck around the leeward side of Ha’afeva for a bit of respite and to make some kind of a plan for the rest of the day. Over lunch, we discussed the idea of a scuba dive with the group: it wouldn’t be anything special, just off the back of the boat as we couldn’t get out to our true divesites but it would be something to do and we didn’t want anyone getting cabin fever! However, just as we were about to commit to Plan B… a lone whale and her calf came cruising in to the bay! We couldn’t believe our luck and quickly got one skiff out kitted up and out there. It was so worth it! They enjoyed 90 minutes of interaction with her and came back very satisfied. We even managed to get the second skiff out despite the rough conditions. They came across a mom and baby with an escort and enjoyed a few really lovely fly-bys. As an extra special treat, they even got to see spy hop from in-water! That evening, we took the opportunity to relax with the crew and enjoy another kava party, the ‘official’ one this time (we’ve been told there were MANY unofficial ones in the days preceding!).

The next day, although the winds were starting to drop, the waves were still HUGE and sadly prevented us from getting in-water interactions with the whales. However, we had the most impressive surface action imaginable! We followed a pod of four or five huge guys, seemingly ‘rough-housing’ for hours. They were moving ahead at a steady speed, constantly rolling over, slapping their pecs down, throwing their tails around, showing off with impressive full-body breaches… It was endless! We sent out a night dive after dinner: we couldn’t have people staying dry ALL day, now could we?! They found a few cool critters including two enormous Spanish dancers.

We couldn’t believe it when we got up the next day and the winds were STILL kicking. Were we ever going to get a break?! Fortunately our guests were super-hardy and got out there regardless. It was really hard conditions out on the skiffs: a lot of bouncing around, ploughing into the swell, trying to line up with possible whales (why can’t they just move in straight lines, preferably with the swell?!). Perseverance pays off! We were lucky enough to come across a pod of three sub-adults who decided they were as interested in us as we were in them. They put on a beautiful show, twisting and turning below us.

Finally, the following day, we awoke to glorious blue skies and SUNSHINE! We’d almost forgotten what it felt like. The shift in weather immediately lifted spirits and everyone got out on the sundeck straight after breakfast, ready for a great day ahead. And, oh my, what a day it turned out to be! Late morning, in gorgeous shallow, clear water we came across a mom, calf and not one but two escorts vying for her attention and we had the BEST interactions imaginable. As up close and personal as one could ever wish to be with a whale! Baby was tiny and it was almost like mom wanted to show her off: she’d very clearly and deliberately turn towards us when she saw us on the surface, bringing baby right in to be admired. She’d come so close we’d have to back up and actually swim away! Meanwhile, below, the second escort would keep sneaking in trying to get in on the action but the primary one would constantly chase him off. Aaaaaand, to top it off, we all got to enjoy some impressively loud singing: a huge array of different sounds including little pops and high-pitched squeaks but also low grumbles that travelled right through our chests. Everyone was over-joyed by the encounter; we had tears of joy afterwards and one guest called it the ‘best moment of [his] life’! We were so pleased: the euphoria was tangible and just what we needed after so many days of rubbish weather and tough conditions.

Over breakfast the following morning a few of the guests mentioned they had heard the whales singing during the night from their cabins below: how amazing! After a hearty breakfast, we tackled our final day engaging with the humpback whales. It was a challenging day – the wind and waves were back full force – but we got out there nevertheless and gave it our best shot right up until the final hour. We did manage a few interactions but, truly, nothing could compare with the day before! It had been one of the best days of the entire season and we all came to the end of our trip very tired but oh so very content. 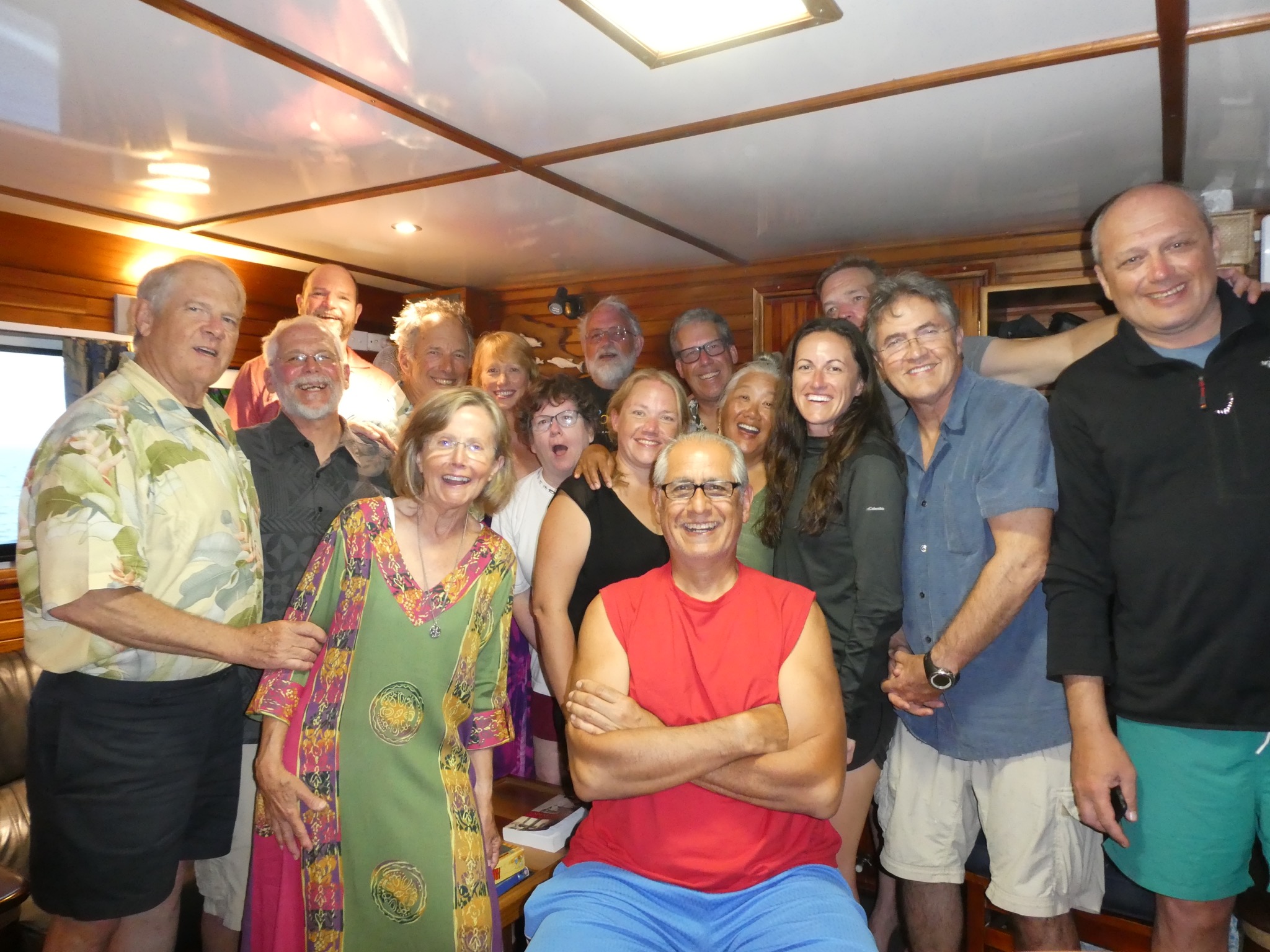 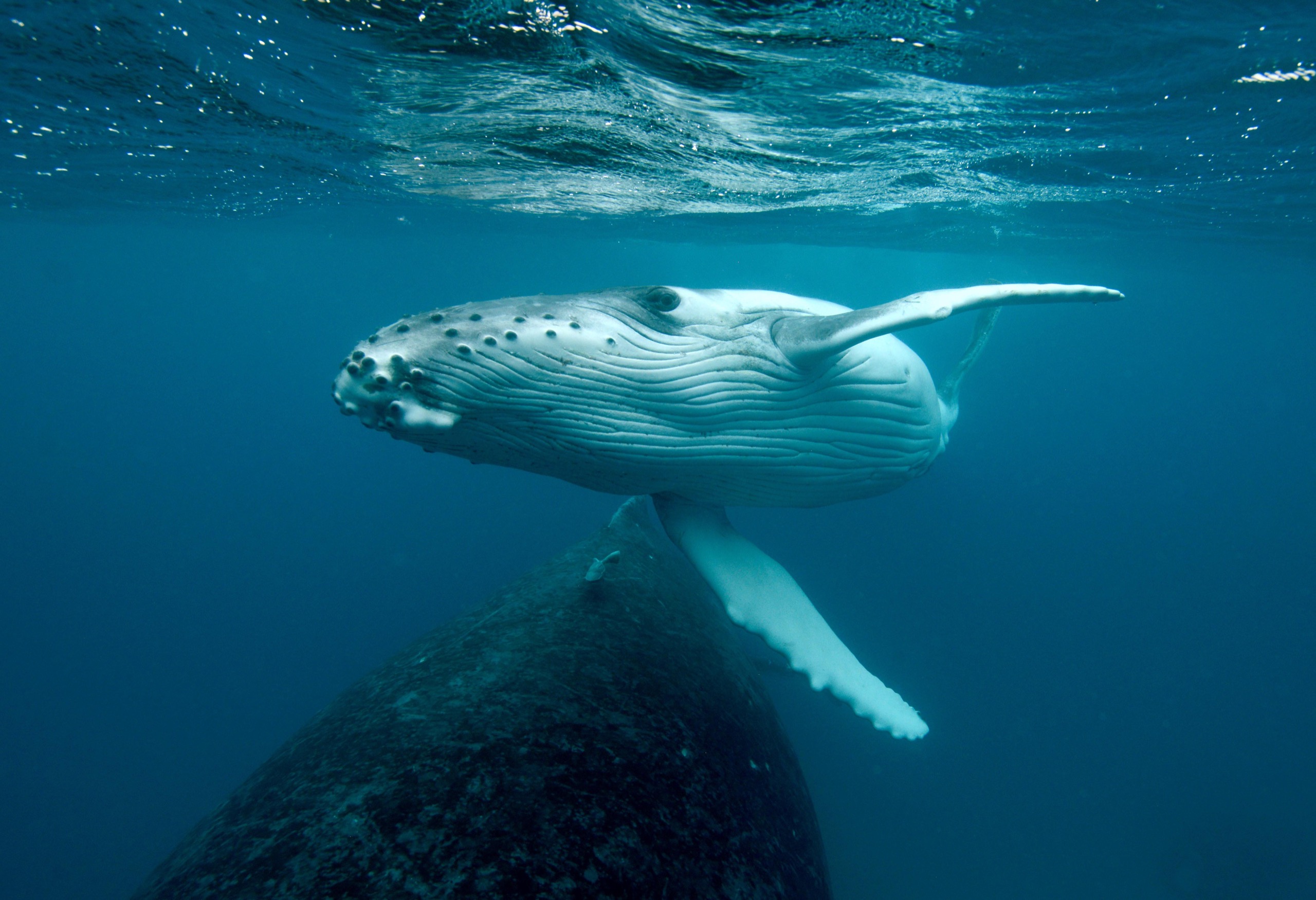 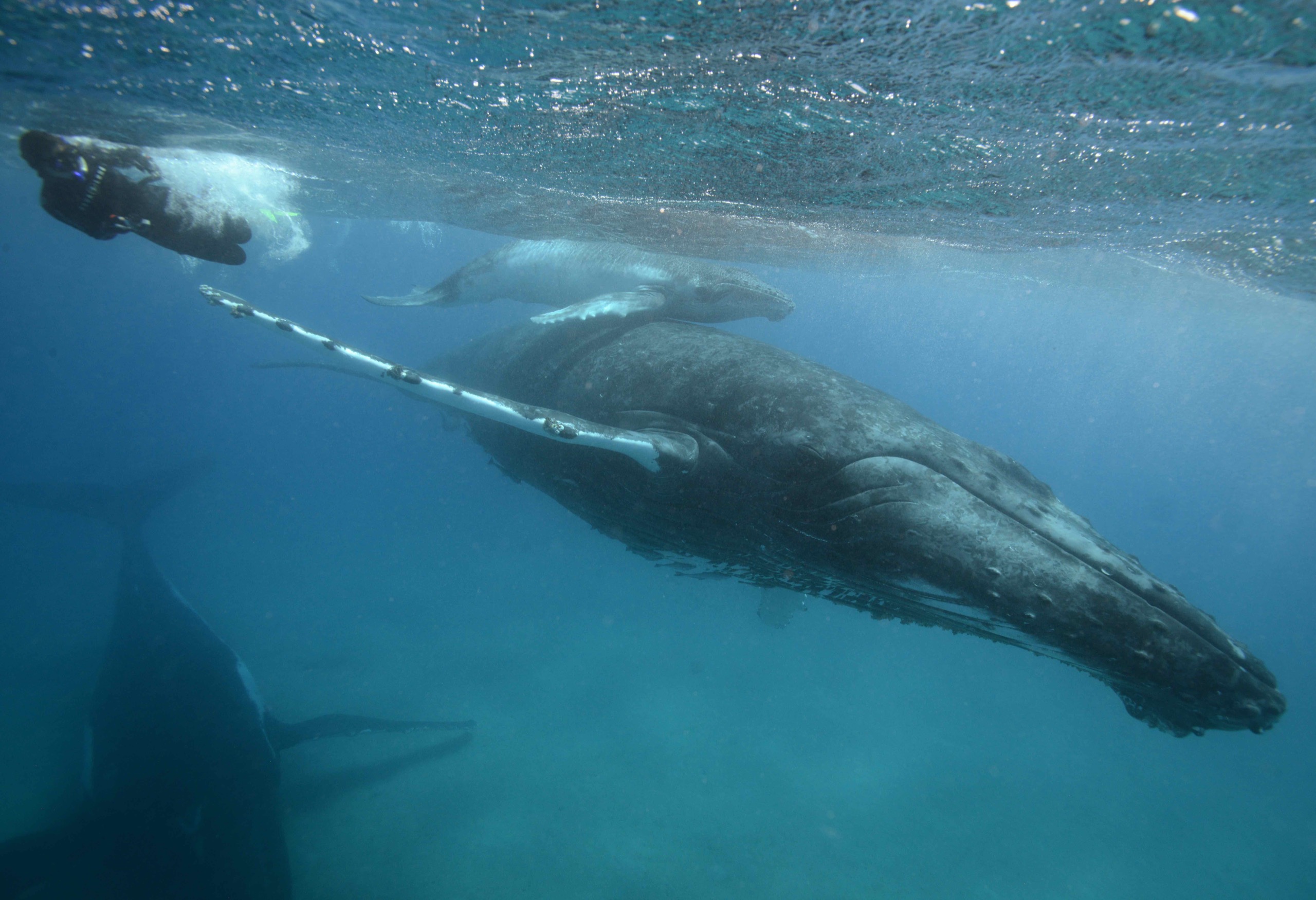 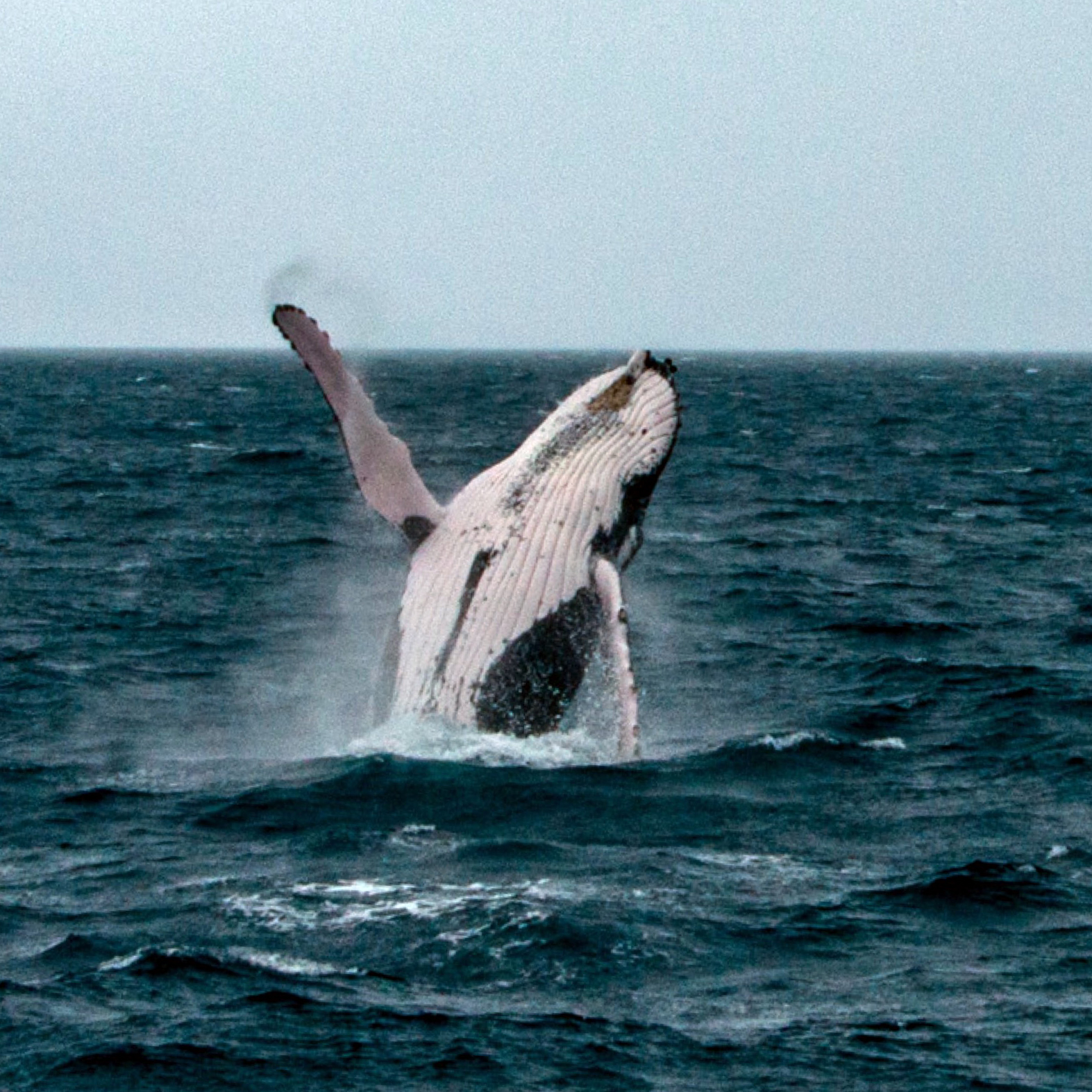 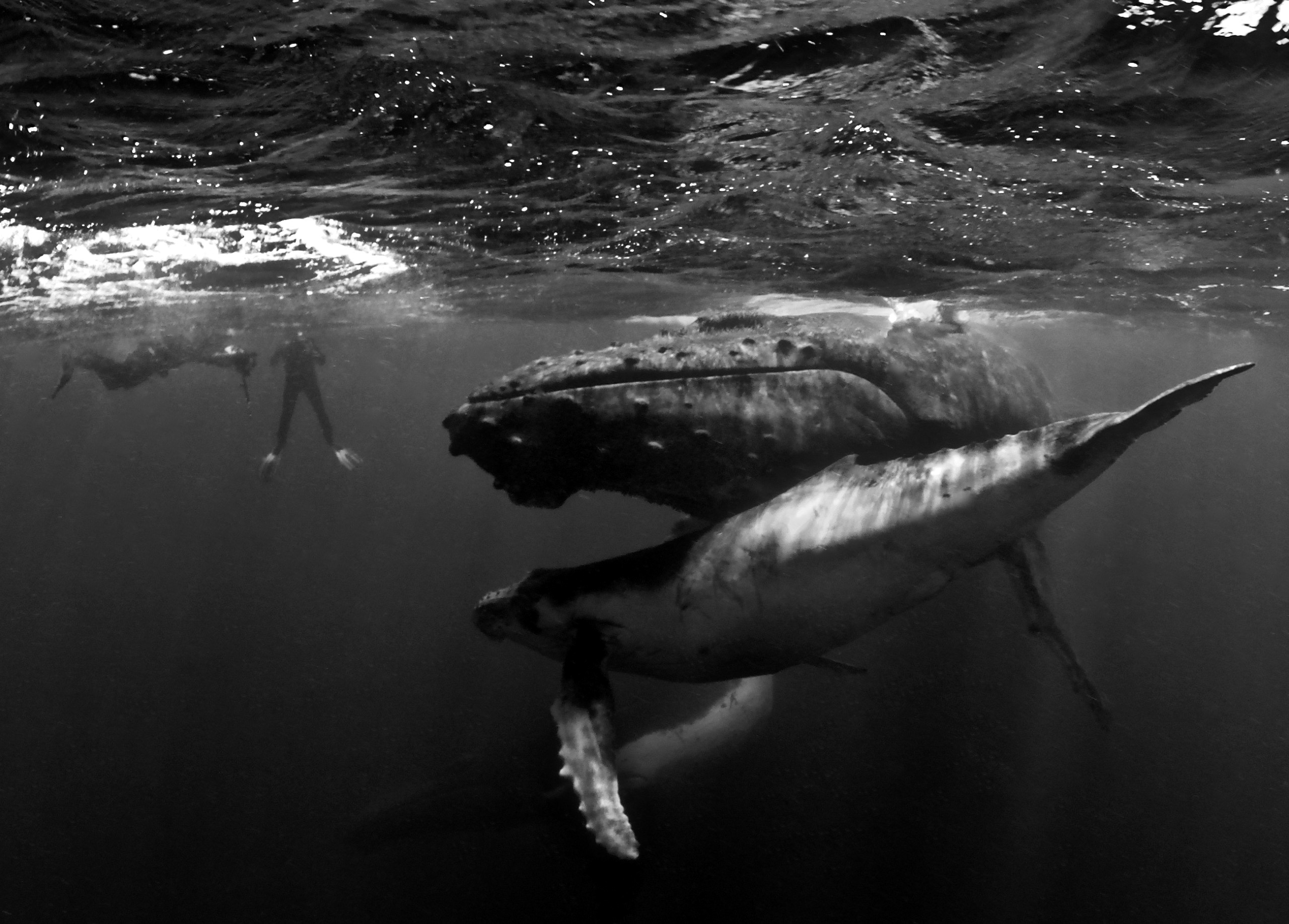 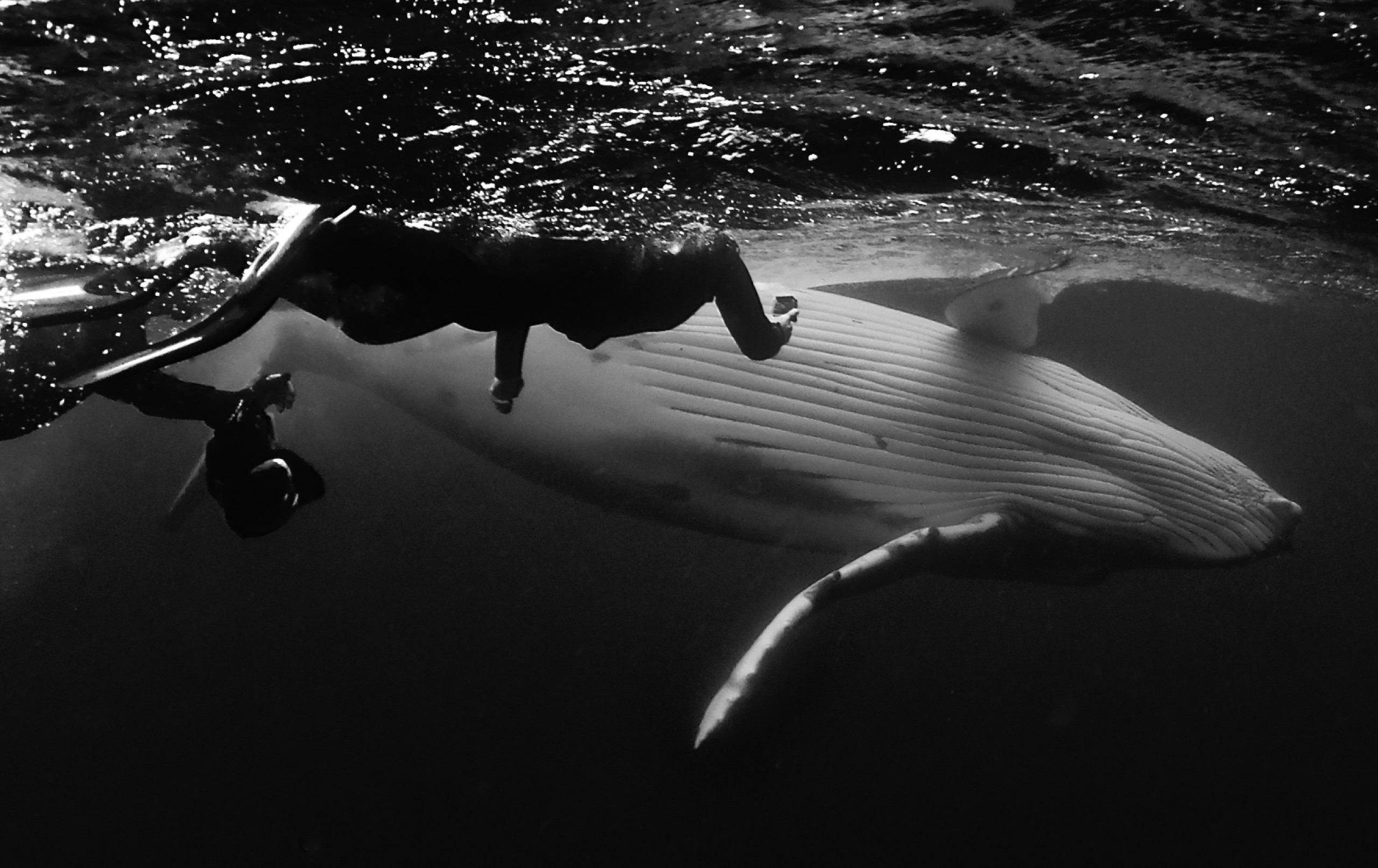 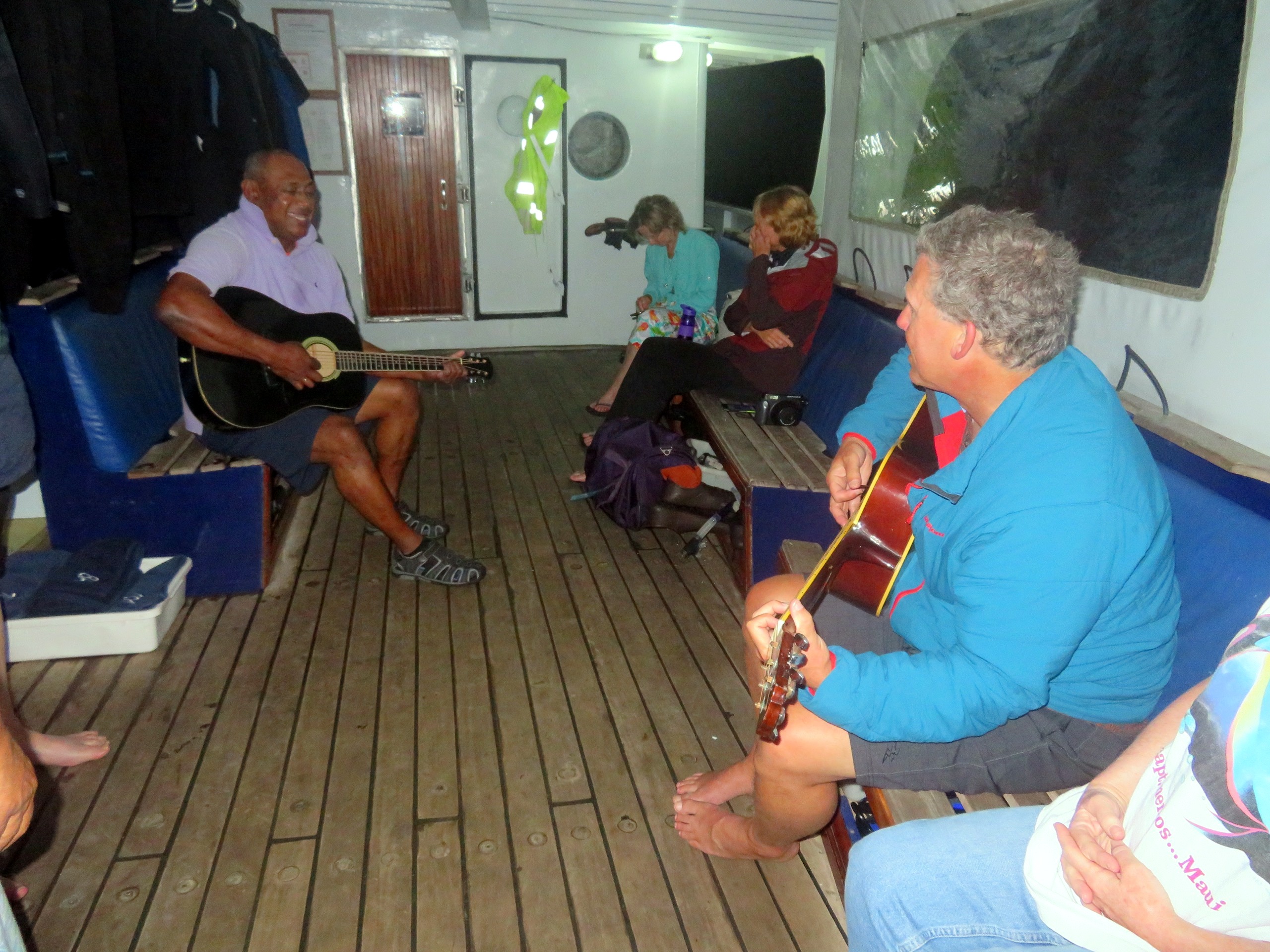 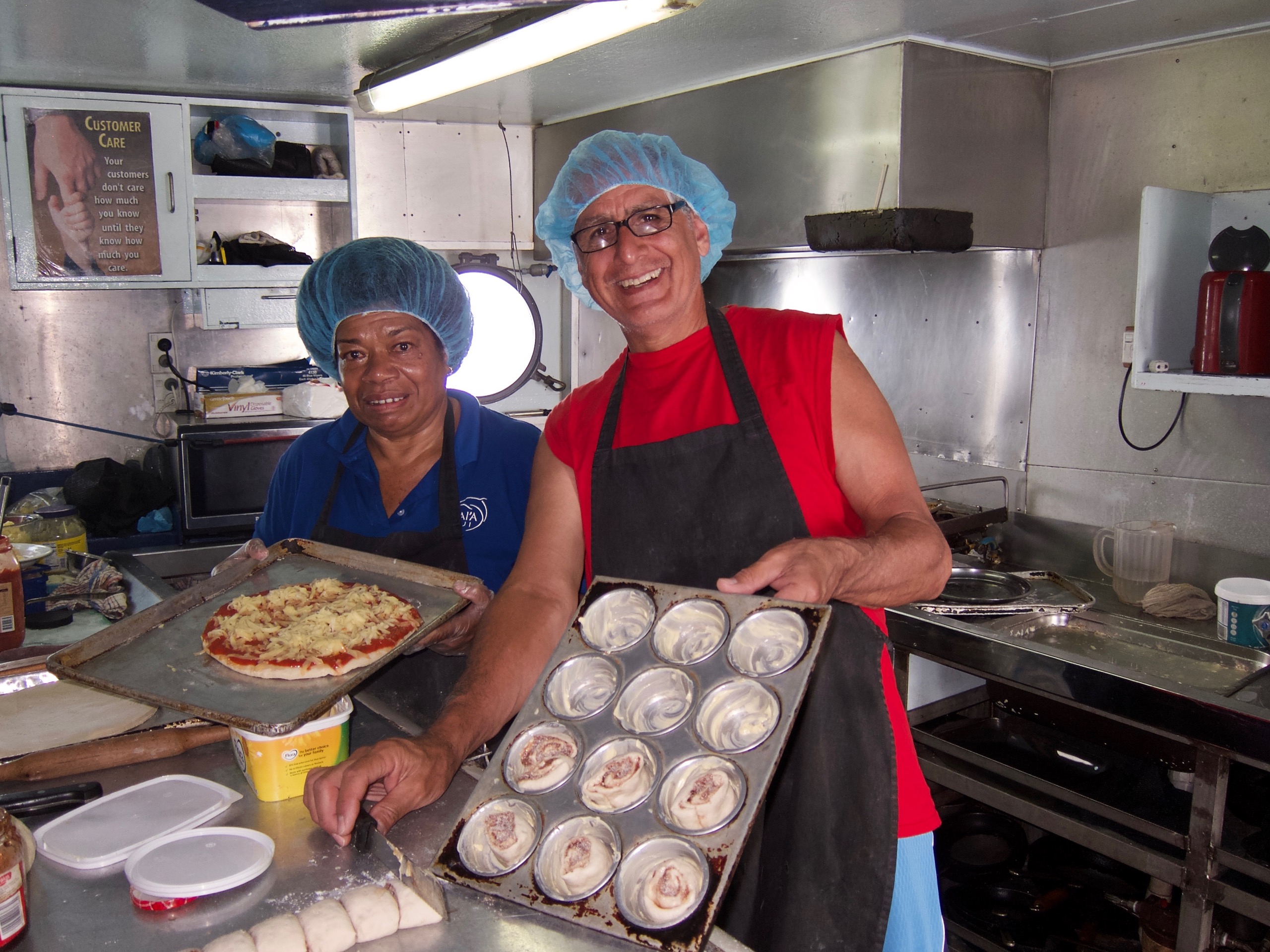