In the wise words of Tui: it was Bloody, bloody marvellous! Despite the windy weather at the beginning and at the end of this trip, we had a great time underwater! We spent another week in the company of sharks (and popped another few hammerhead cherries!), manta rays, octopuses, hydroid crabs and a gazillion baby octopuses, newly hatched! We honestly cannot get enough of Fiji Liveaboard life! 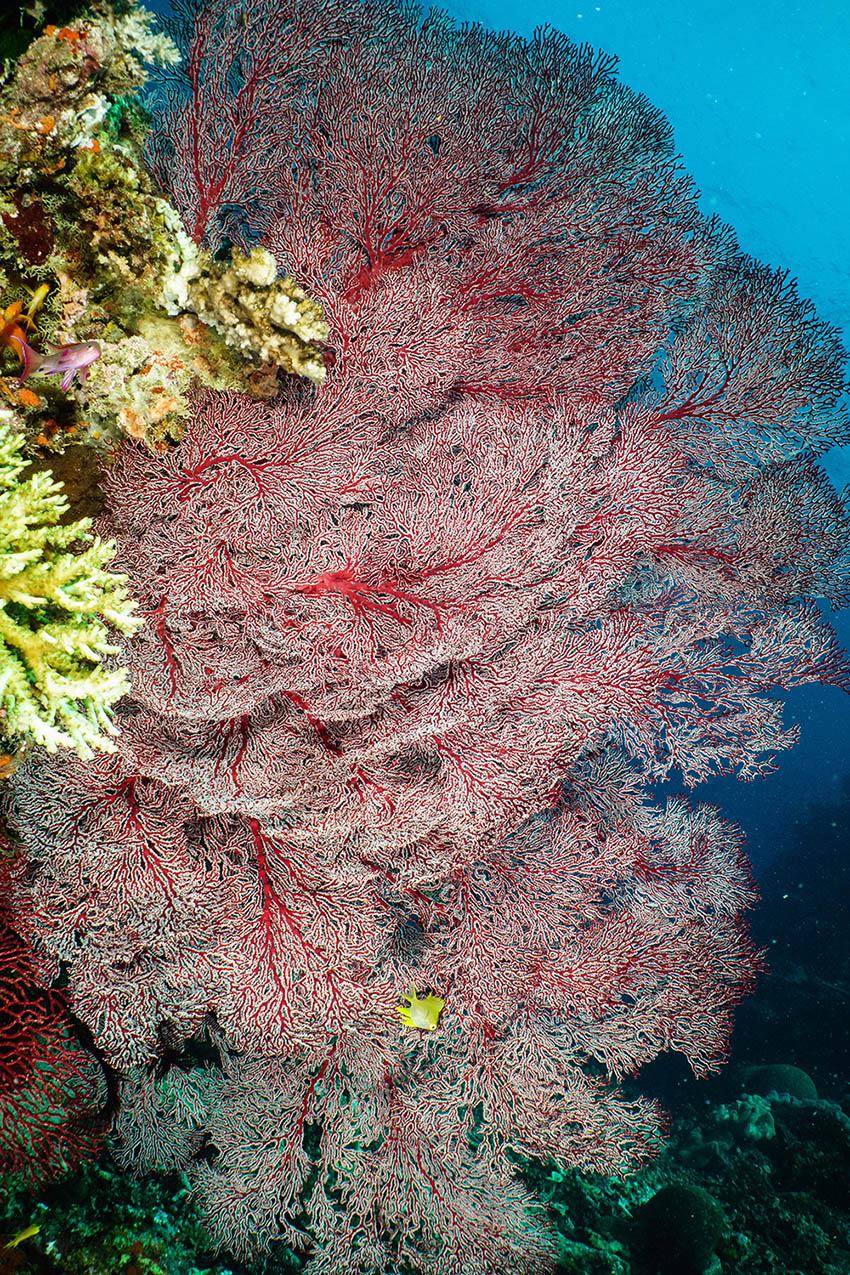 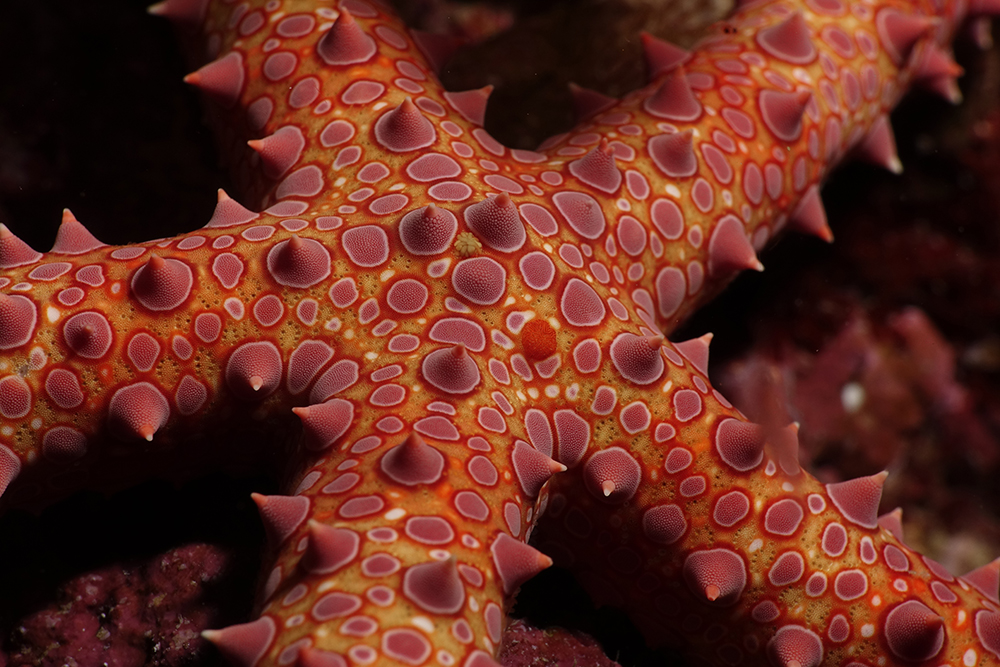 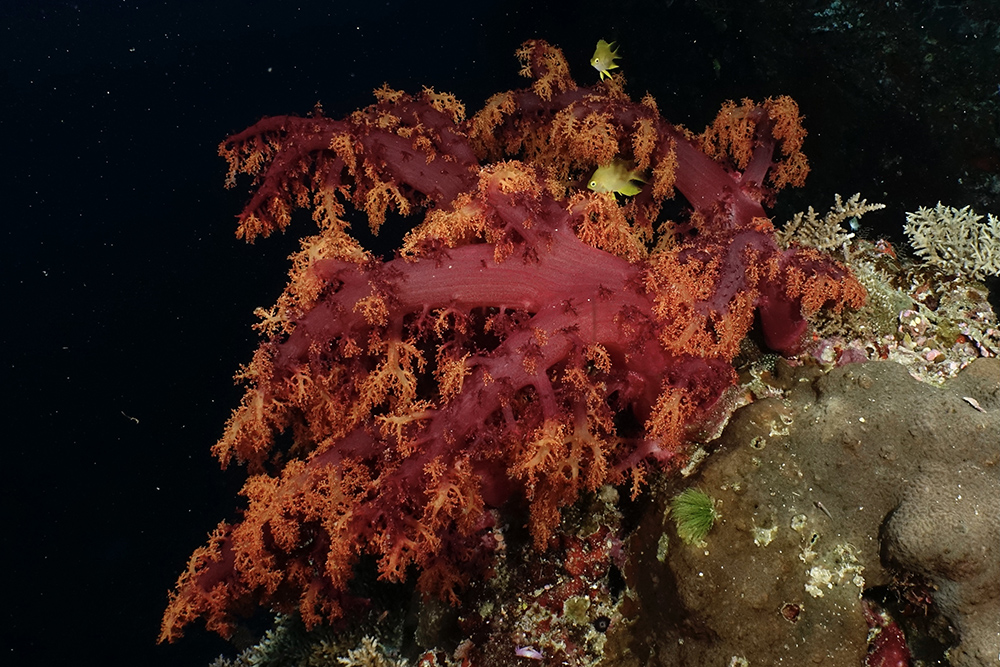 We began this trip welcoming aboard 12 out of 13 guests. Roger , coming from Australia, would only arrive after our checkout dive. Also from Australia but as early as they could be, were Colleen and Tui, stars of our “Bloody Marvellous” episode. They booked this trip as soon as they returned from the last one. NAI’A was also welcoming back Bill, Trudy and Kathy, and we set out to our checkout dive where Ladonna found a ginormous Thorny Stingray. Later we picked up Roger, and were on our merry way!

Our first morning was spent doing a very relaxing dive at Alacrity, followed by another chilled dive at GoMo and Whole Shebang where our divers were mesmerized by the incredible health of our reefs. That 26C/79F water is chilling for us but great for our corals! For the 3rd dive, with only 7 divers standing, we went to Mellow Yellow and saw a Scarred Flatworm, Blue Dragon Nudibranchs, and the great ballet of Scalefin Anthias, 4 types of Fusiliers and as well as a cloud of Ternate Chromis. A few of the guests follow our Divemaster Diaries and definitely understood Michelle’s reaction to MY on the “I need a cigarette after that” episode. The wind picked up and we decided to call it a day, so we talked about fish, flatworm penis fencing and True Facts about many animals. 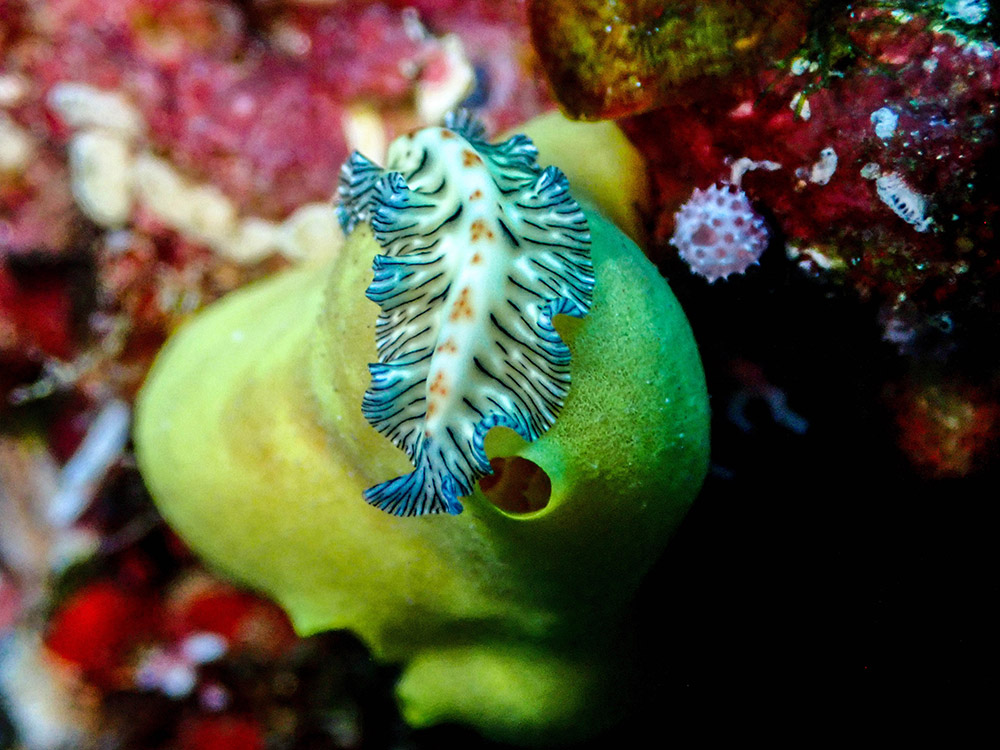 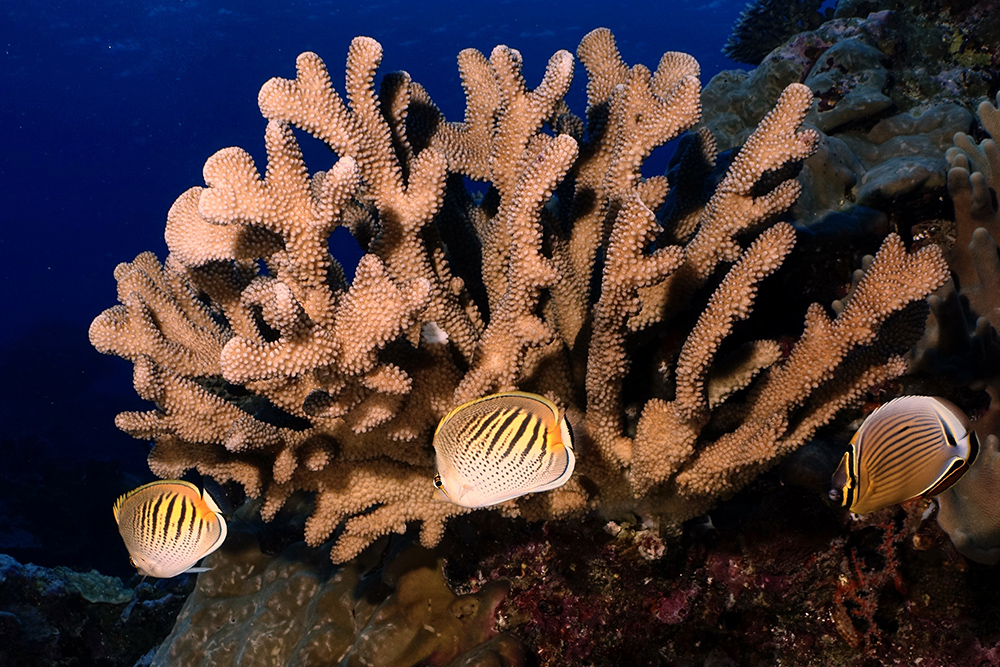 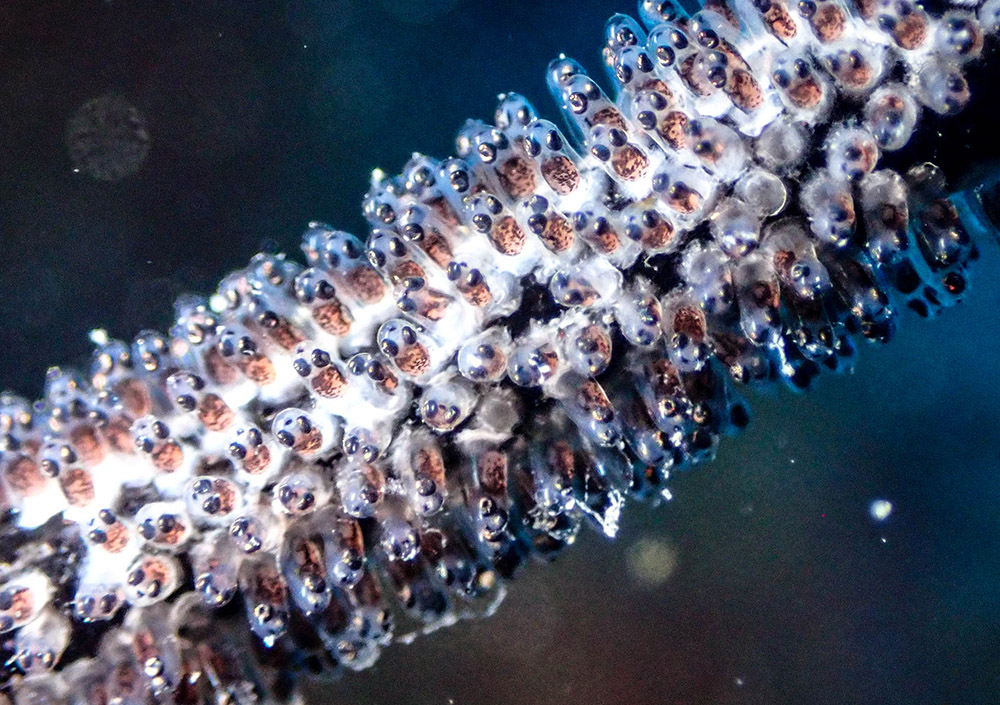 We woke up to a rainy morning in Gau, but splendid visibility at our Outer Slope dive where we spotted Fire Dartfish, Connie’s Flagfish (or Intermediate Midnight Snapper, as the books call them), Yellowtail Barracudas, a couple of Sea Kraits and a Coral Croucher (nice find, Tui!). On the safety stop, Bel spotted some sort of juvenile Pteropod, super cute but far too tiny for a picture! Nigali passage was a big hit, as always, with plenty of barracudas, Black Snappers and a few friendly sharks. Jim’s and Anthia’s provided some Nudi Porn and Surgeonfish galore for each group and our Village Visit was a hit, although under the rain for a good portion of it. Back on NAI’A, we celebrated Dave & Christy’s 30th anniversary and Mark & Carrie’s 20th!

After a rocky night, we spent a bright sunny day at Wakaya and Makogai. Wakaya graced us with 8 Mantas sighted (four barrel feeding together!), an Octopus, Popcorn Shrimp, a Golden Mantis, many sharks, some Clingfish, Randall’s Shrimpgobies and nudis, always nudis. We managed to get a photo Id on one of the mantas, and it’s a new one again! To be named Bella Donna (Bel – Ladonna). In Makogai the topography of Becky’s and Rick’s stole the show again, but the soft corals were stunning (despite the very low current) and we saw Lunas Fusiliers, many Lionfish and Bel’s first Orangutan Crab. The night dive got cancelled at the last second due to some squalls and we all went to bed craving more diving! 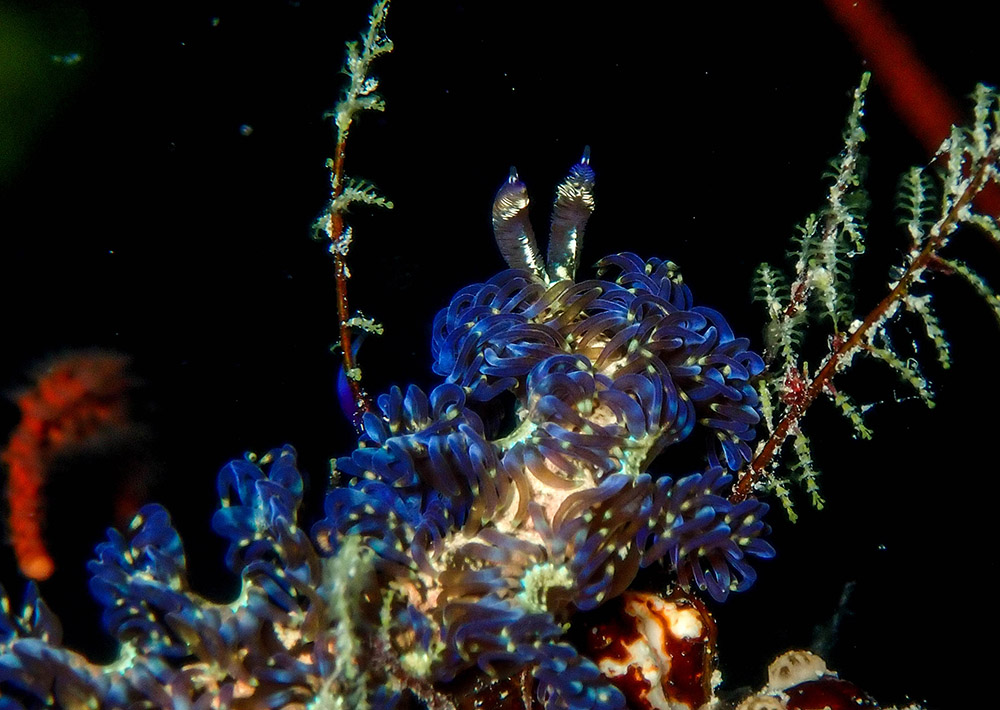 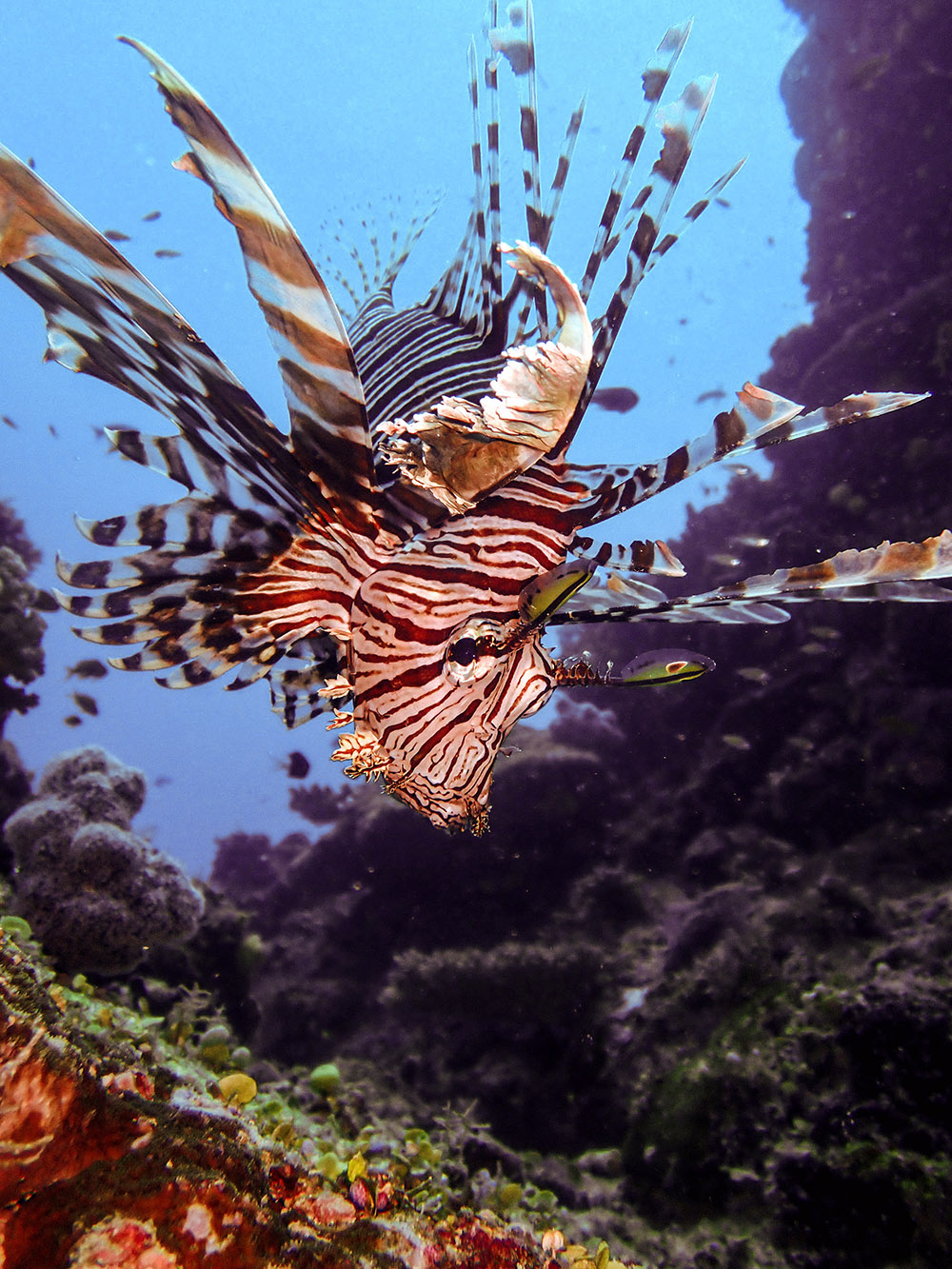 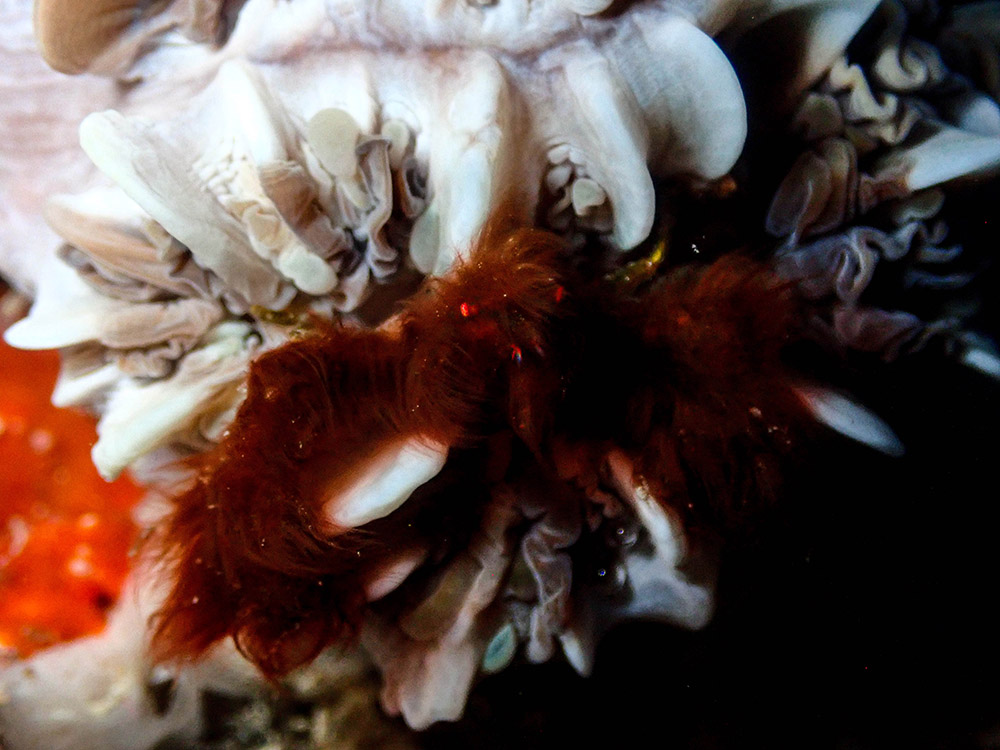 We dived Vuya Reef the next day with calm winds and soft currents. Our dives had plenty of nudibranchs (and an egg ribbon!), some  Scorpionfish, Flatworms, gorgeous soft corals, schooling young Gray Reef sharks, a giant school of Crencent Tail Bigeyes, barracudas and more! After the last dive, we also saw a pod of Bottlenosed Dolphins, what a treat! We decided that from now on, every day is Ladonna’s birthday.

Our night dive deserves a chapter of its own. We saw our usual Skeleton Crabs, Hingebeak Shrimp, Feathermouth Sea Cucumber… But also another sea cucumber spilling its guts out, 2 Barchin Scorpionfish, orange Sidegill Slug, Longfin Squid and populated Crinoids. The krill were abundant and at times a nuisance…. But at one point Bel found a cloud of something that wasn’t white like the shrimp… it was orange… and it turned out to be thousands of newly-hatched octopuses!!!! With a lot of enthusiasm, Bel tried to point it out to the divers, but the krill that mixed with them made it difficult, and it took a while until Dave saw it, then shared it with Christy. Ladonna thought Bel was talking about the squid and swam away… Sometimes we wish we could talk more underwater!!! As a bonus, when we were looking at the octobabies, we also saw a larval Mantis Shrimp. It was absolutely solidified that every day is to be Ladonna’s birthday!!! 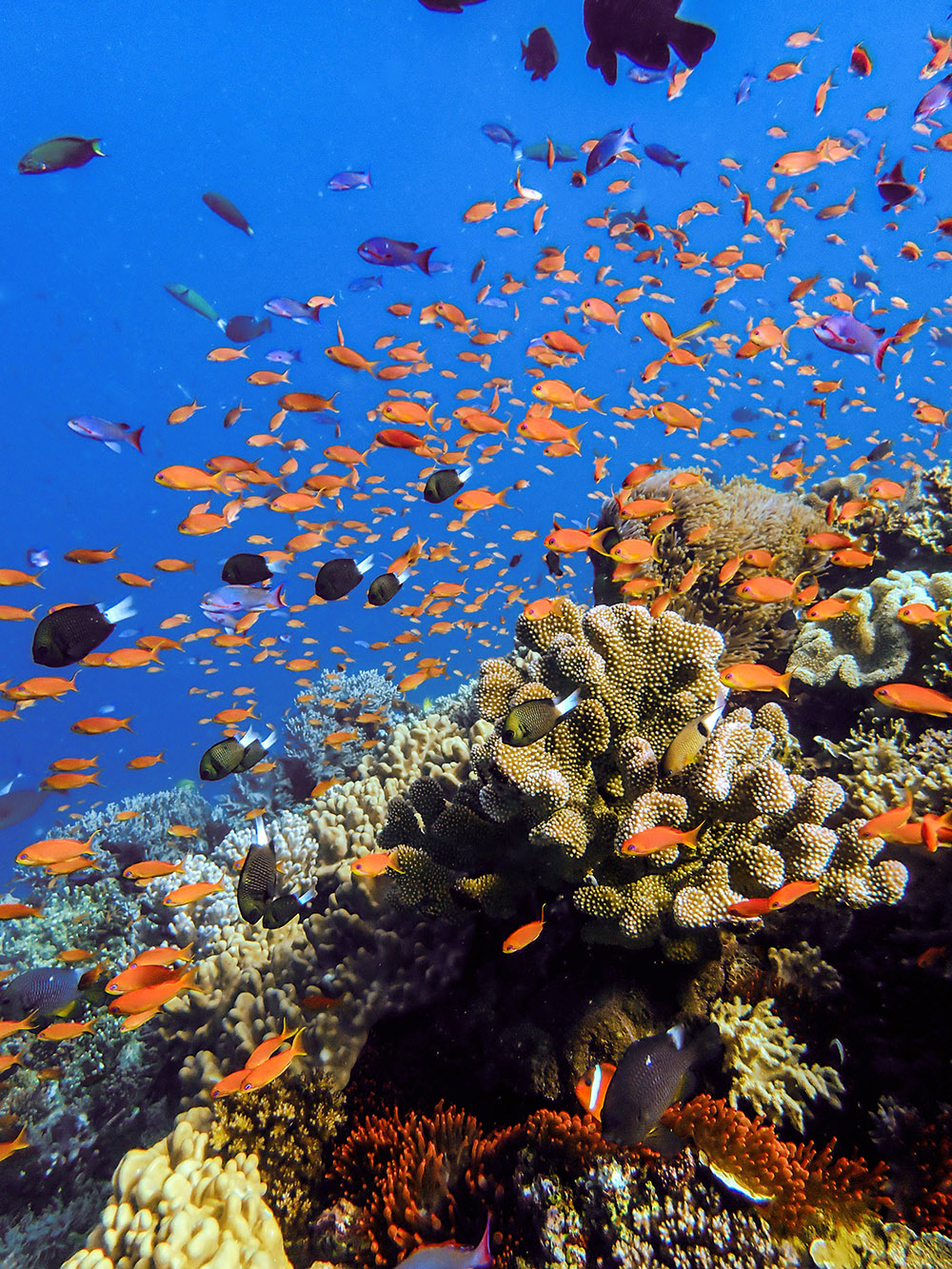 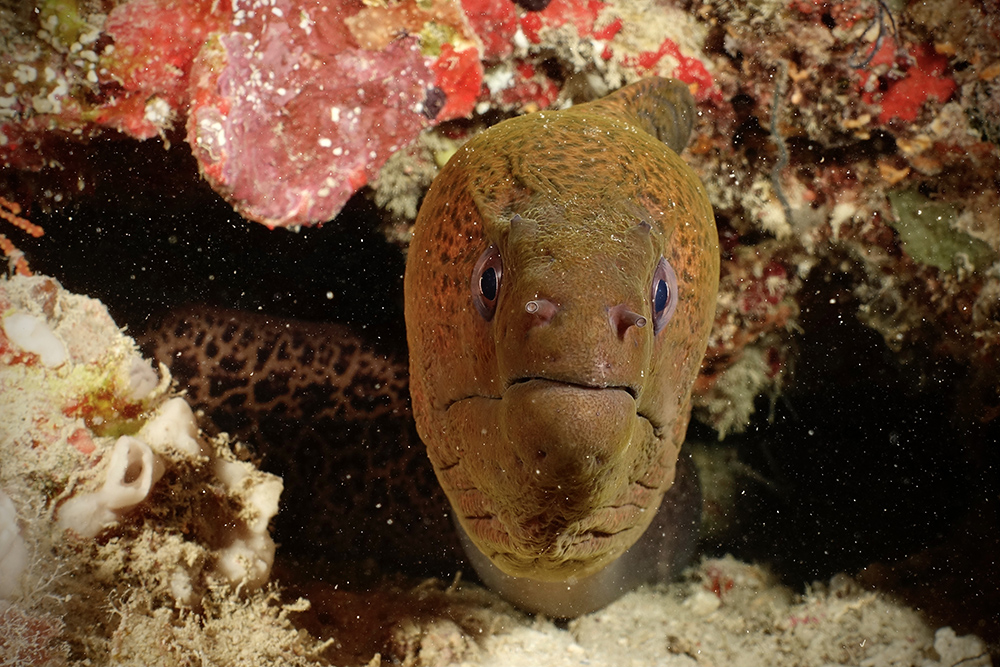 Photo by Ladonna: It's a moray! 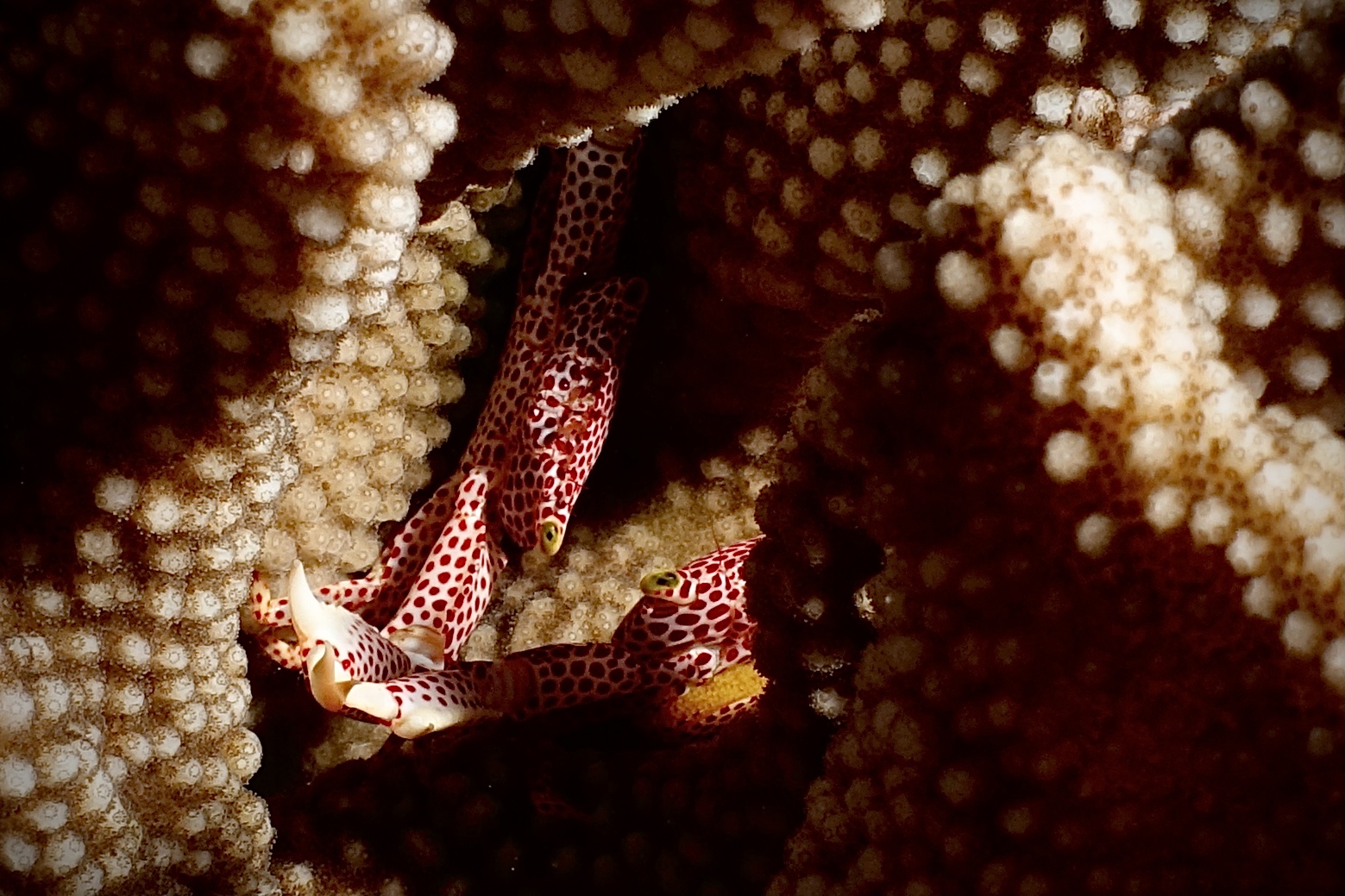 Photo by Ladonna: Mama crab (look at her eggs!)

The following day was Sea Mounts day, and Ladonna’s second birthday, so her good juju held! Besides the always memorable healthy reefs of both had and soft corals, we saw a Hammerhead (and popped Connie’s hammerhead cherry!), a Hawksbill Turtle, Intermediate Phase Spotted Parrotfish, a pregnant flatworm (or so we think) and a few Scorpionfish and White Tips. Our Kava party was a big hit once again, but the animals were tired and retired to bed a little after 8pm. 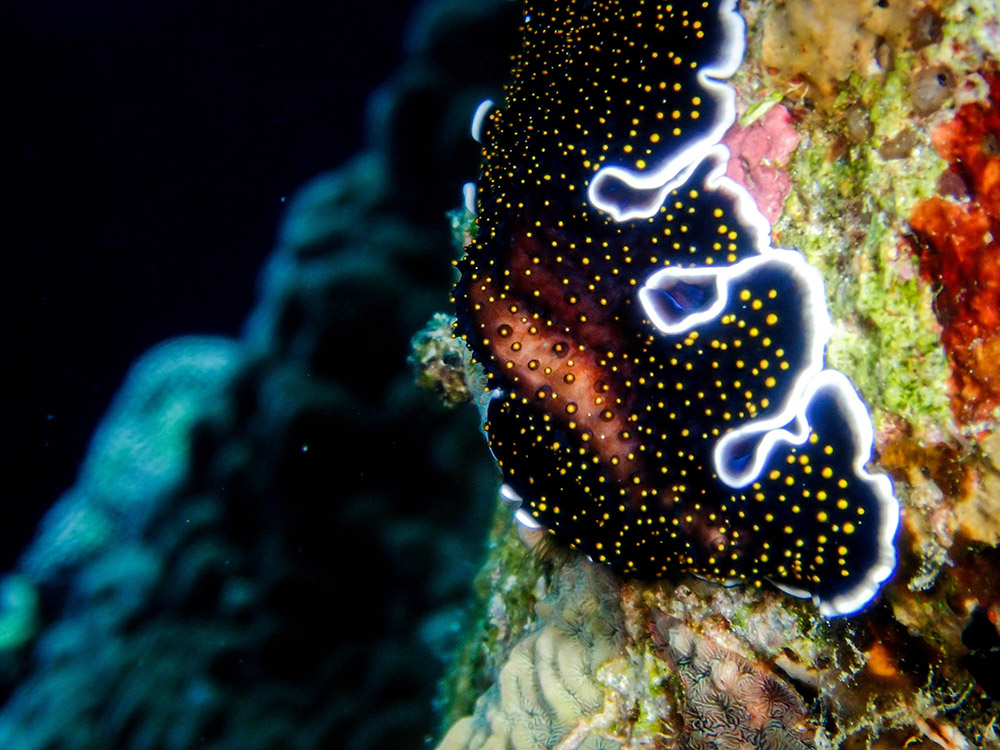 Photo by Bel: Is this flatworm pregnant?? The bulk in the middle seemed to be contracting... 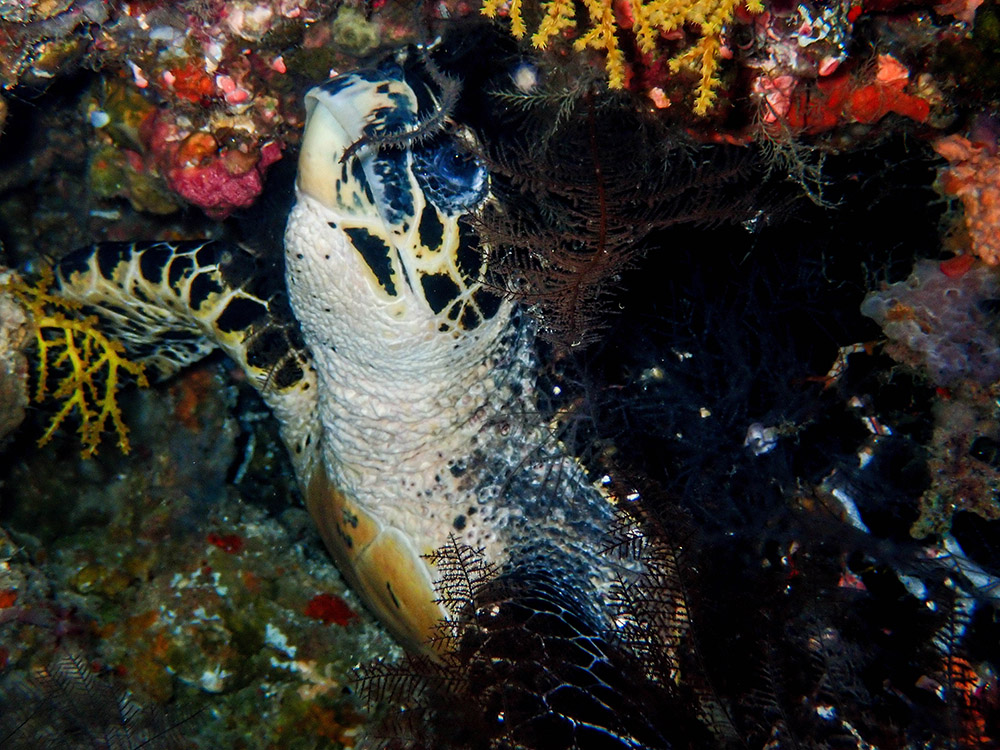 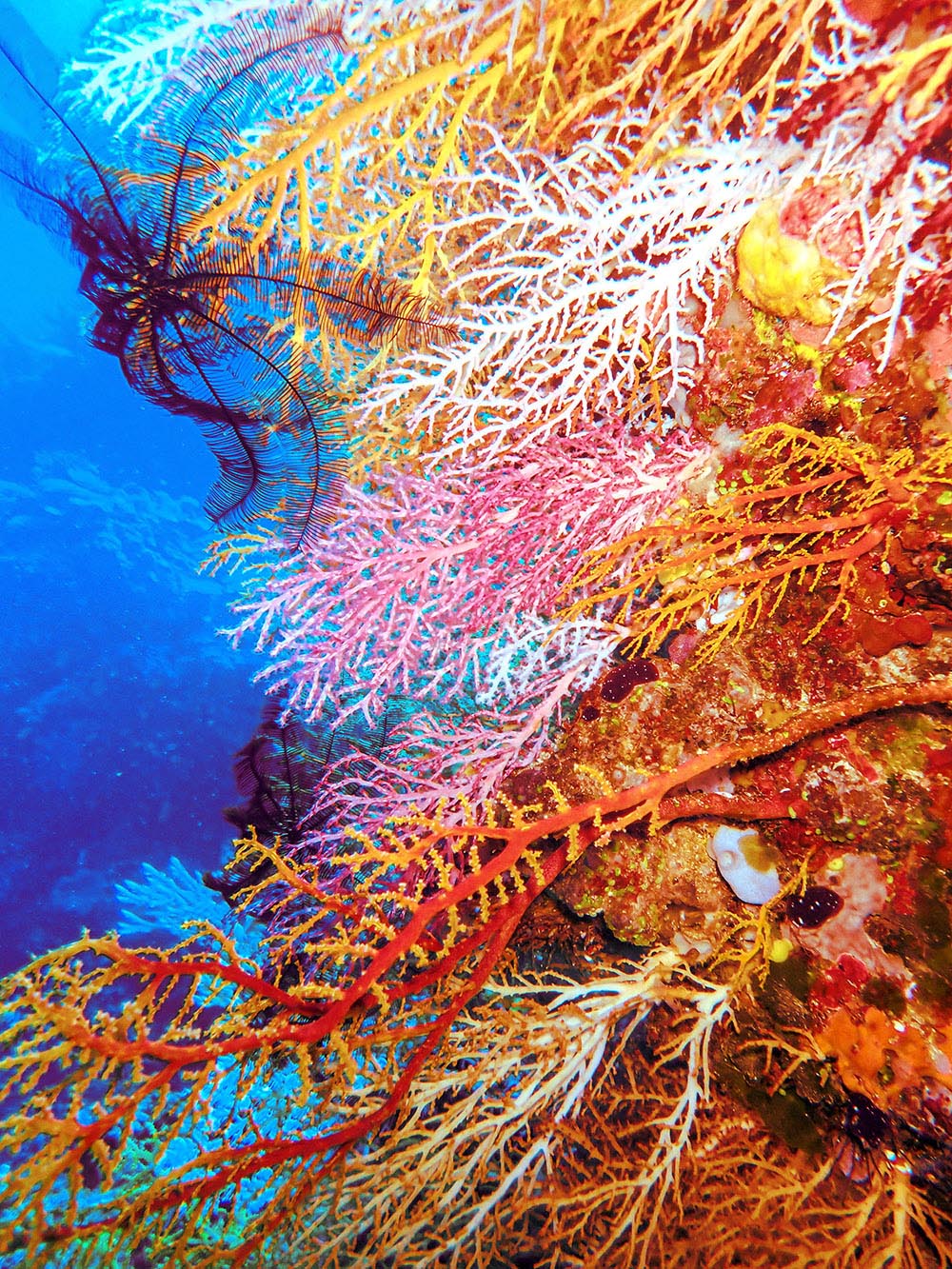 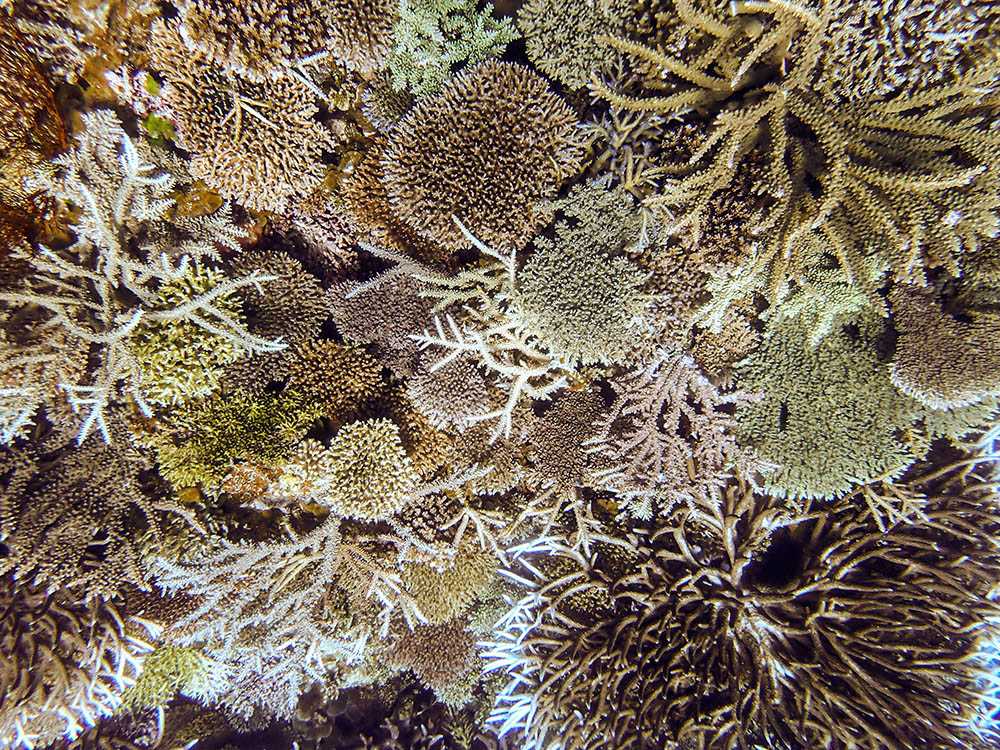 Our last day was spent at Vatu-i-ra with a beautiful Squid Squad, a Sarasvati Anemone Shrimp, an Ocopus out and about, White tips and Grey Reef Sharks. They were 2 lovely dives with fabulous visibility. The wind increased and we had to call it a day and cancel our 3rd dive and start heading home. Dave and Christy were sad they didn’t get to say their goodbyes to the fishes, but that OK, it’s an excuse to be back for their 31st anniversary! We headed back to Lautoka a little sad about the end of another trip, but knowing we will see some of these friends again. Tui, it was indeed bloody, bloody marvellous. See you for your 80th! 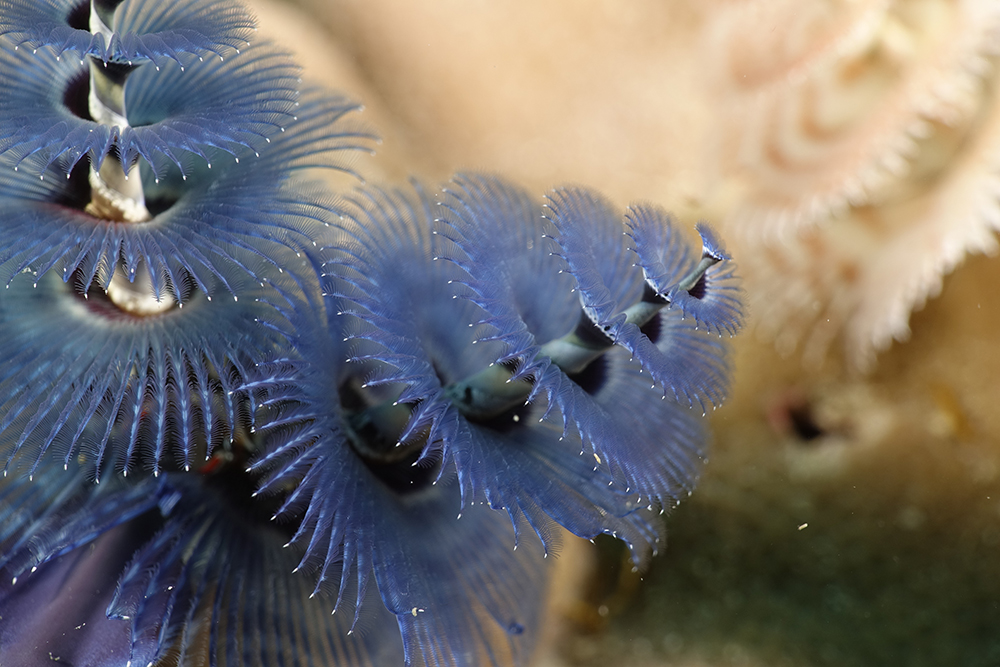 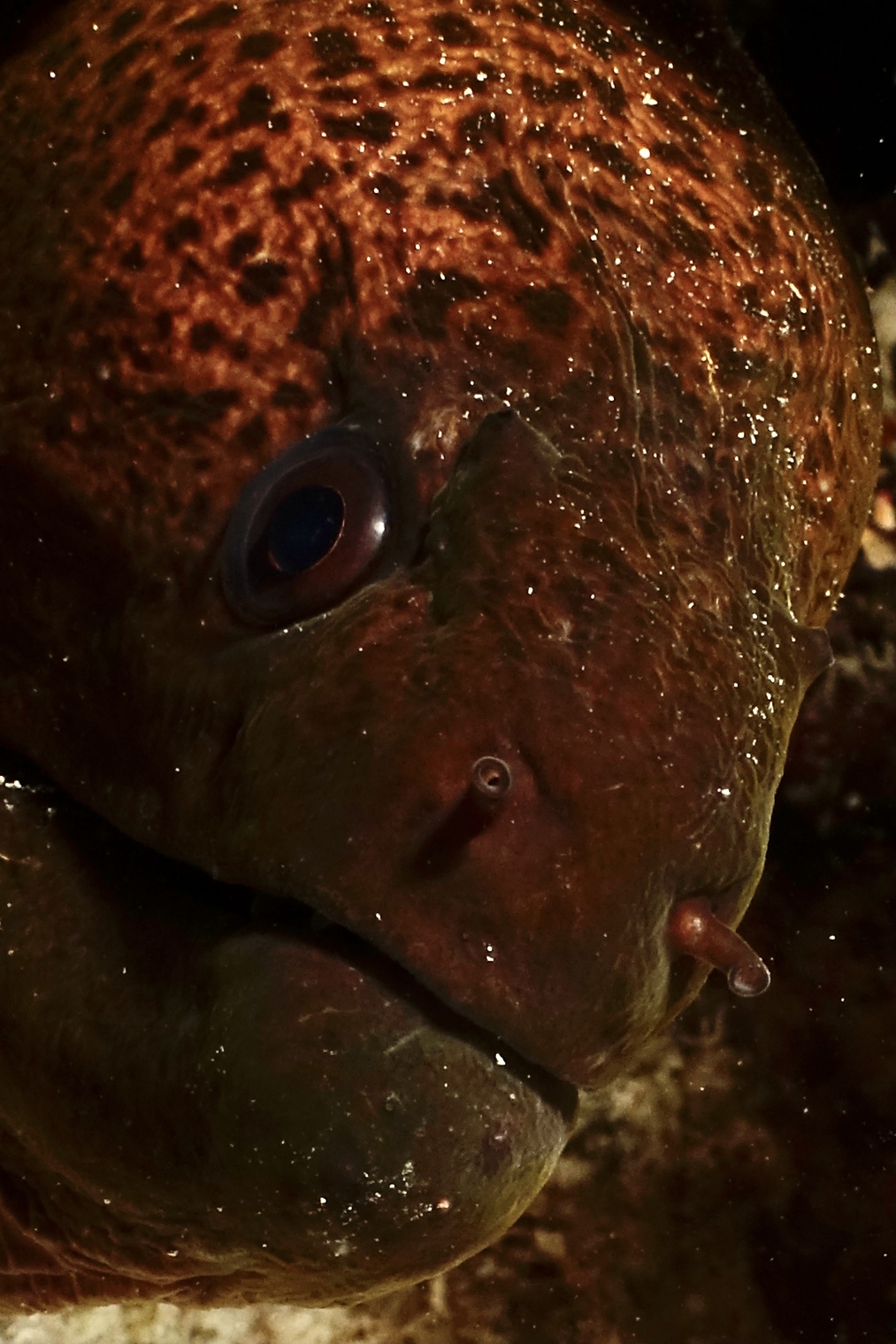 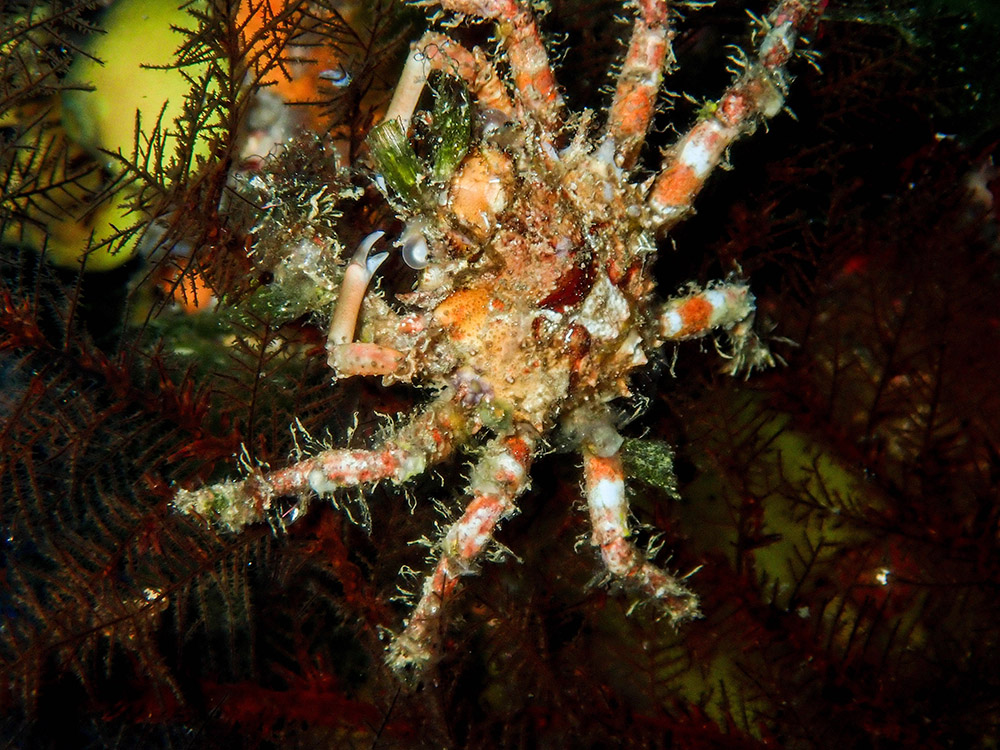 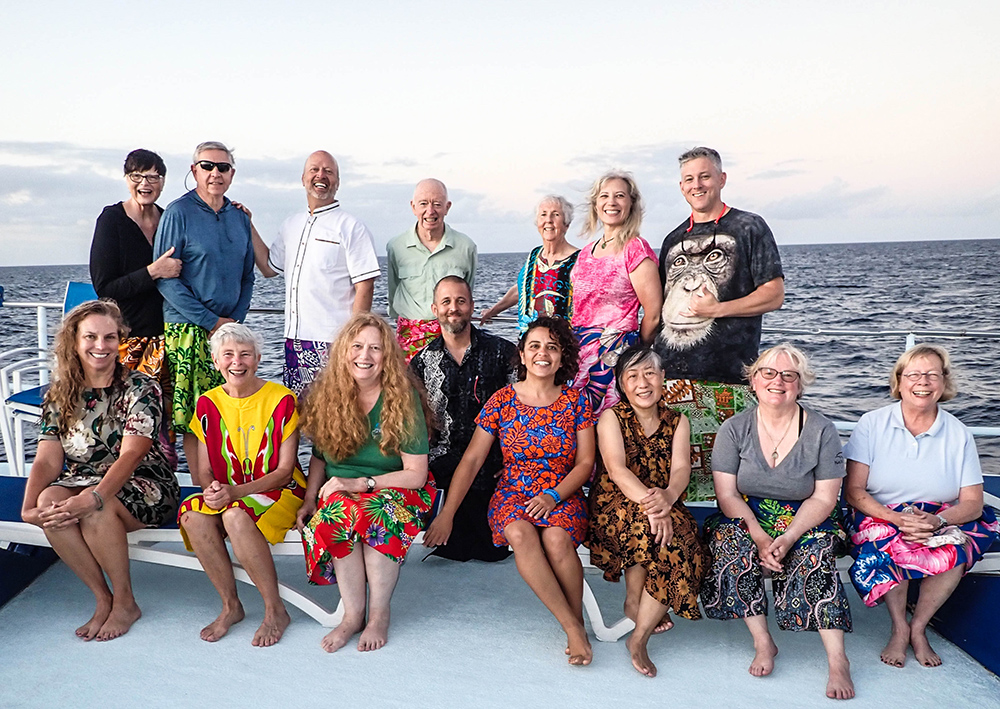 They arrive as guests, but leave as friends. Vinaka!