Macro with a chance of Mantas

We have had photographers on board before, but WOW!!! Backscatter chartered this trip and sent the wonderful and talented Ron Watkins in charge of 17 photographers who wanted to see the best of Fiji. With a positive attitude and a moving as fast as Nudibranchs, this group captured Fiji’s essence in fantastic shots and videos. Their positive attitude brought incredible luck and we had encounters with dancing Mantas, chatty Pilot Whales, curious Hammerheads, mating Flatworms and elusive Silvertip Sharks. Schools of Trevallies, Bannerfish, Barracudas and baby Grey Reef Sharks also made an appearance, but they were somewhat camera shy. The question at the end of every day: What’s tomorrow, Macro or Wide?? We normally had a good answer, but Ron was not impressed with the answer that a dive was: Macro, with a chance of Mantas!

This trip started with an unusual problem: as we headed out to our checkout dive, we realized the guests mistakenly brought on board the luggage of a Canadian lady who was at the same hotel as them. The poor woman must have spent the day worrying about where her luggage disappeared to… but all was well in the end, as we sent the bag to meet her at the airport in time for her flight. After spending 10 days with this group, I can’t help but think Kramer had something to do with this! 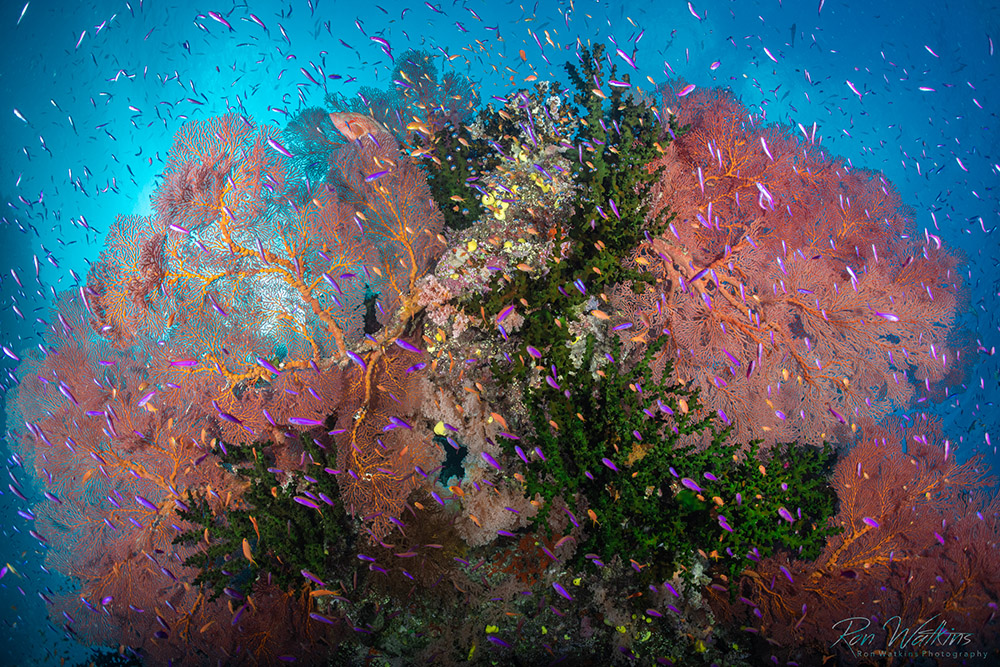 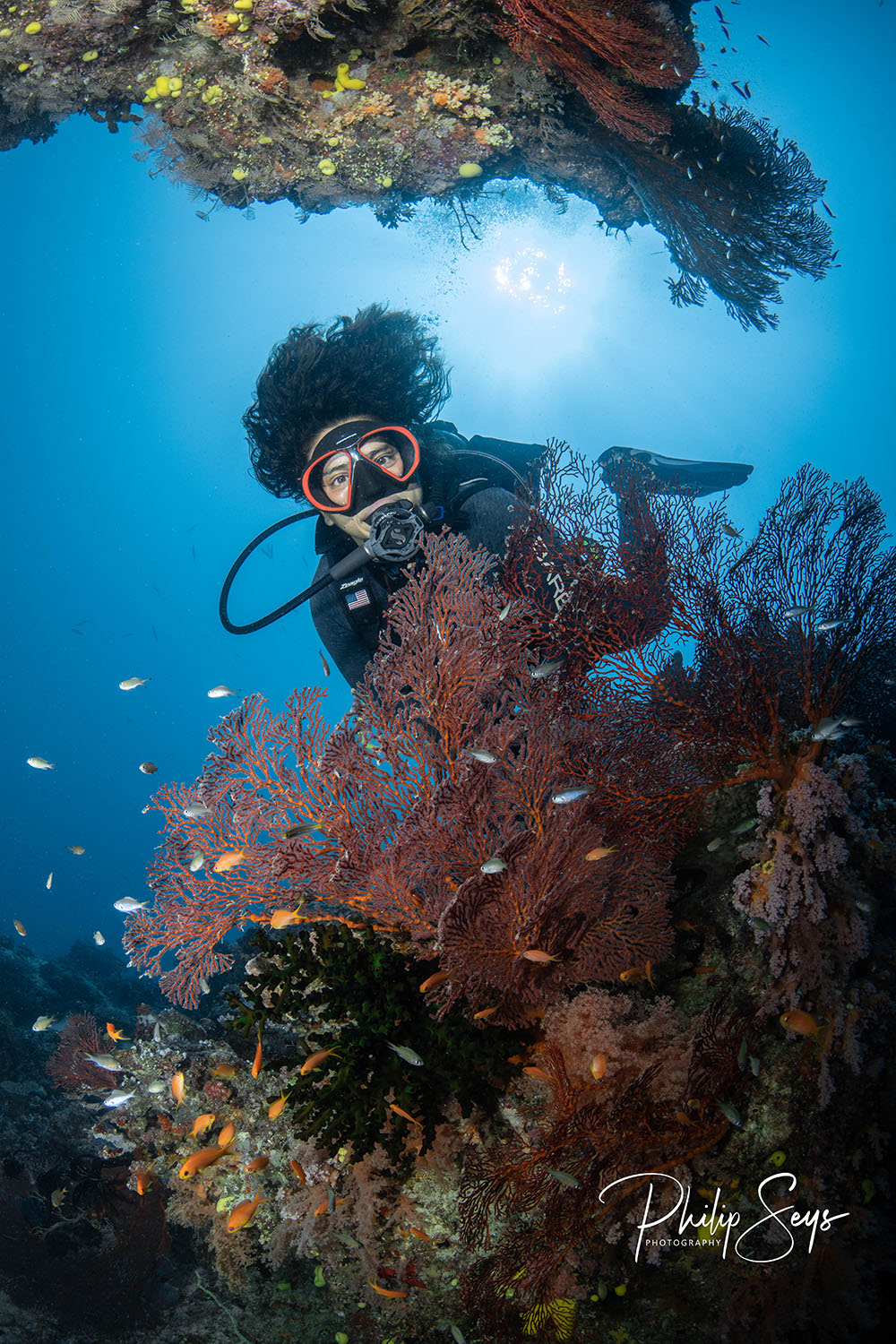 Photo by Philip Seys: It's all about composition. And crazy hair. 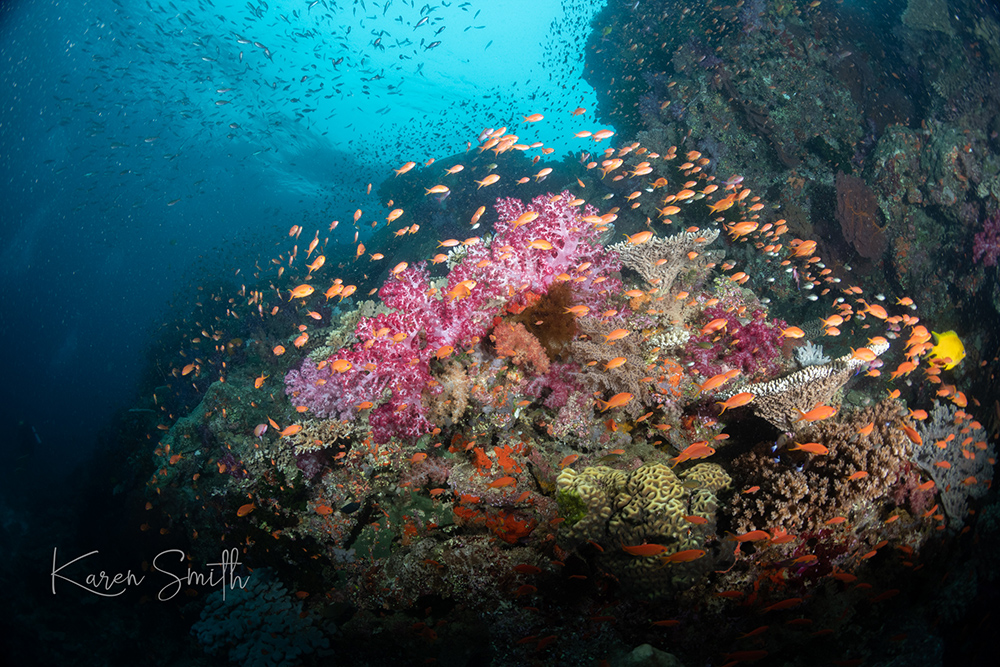 The next morning a lot of the guests were up 1h before they were due, as their electronic devices went into Daylight Saving but Fiji didn’t. After setting the clocks back to normal, we spent our Sunday showing these photographers/videographers some of Vatu-i-ra’s soft corals, hard corals, Reef Sharks, gorgonians, nudibranchs and fish drama… ALL the fish drama (we love Mellow Yellow).

We cruised for an hour the next morning and spent the day at Vuya. We had moderate currents in the morning, which means the soft corals were as beautiful as ever and the fish were abundant, especially on top of the bommies. At UndeNAI’Able the current was milder and the windows and swim-throughs were a big hit with the Wide Angle crowd. Flabelinas and Blue Dragons were abundant, but Bel was disappointed the Frogfish from the past week wasn’t there. On the night dive Mike and Amalie saw a Bobtail squid. 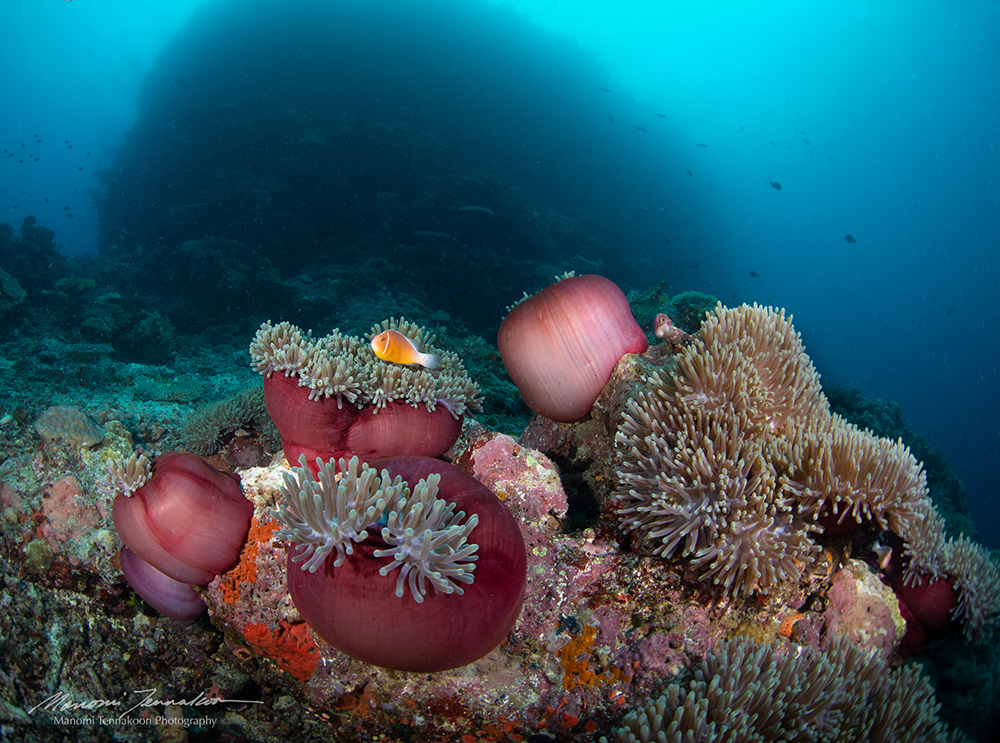 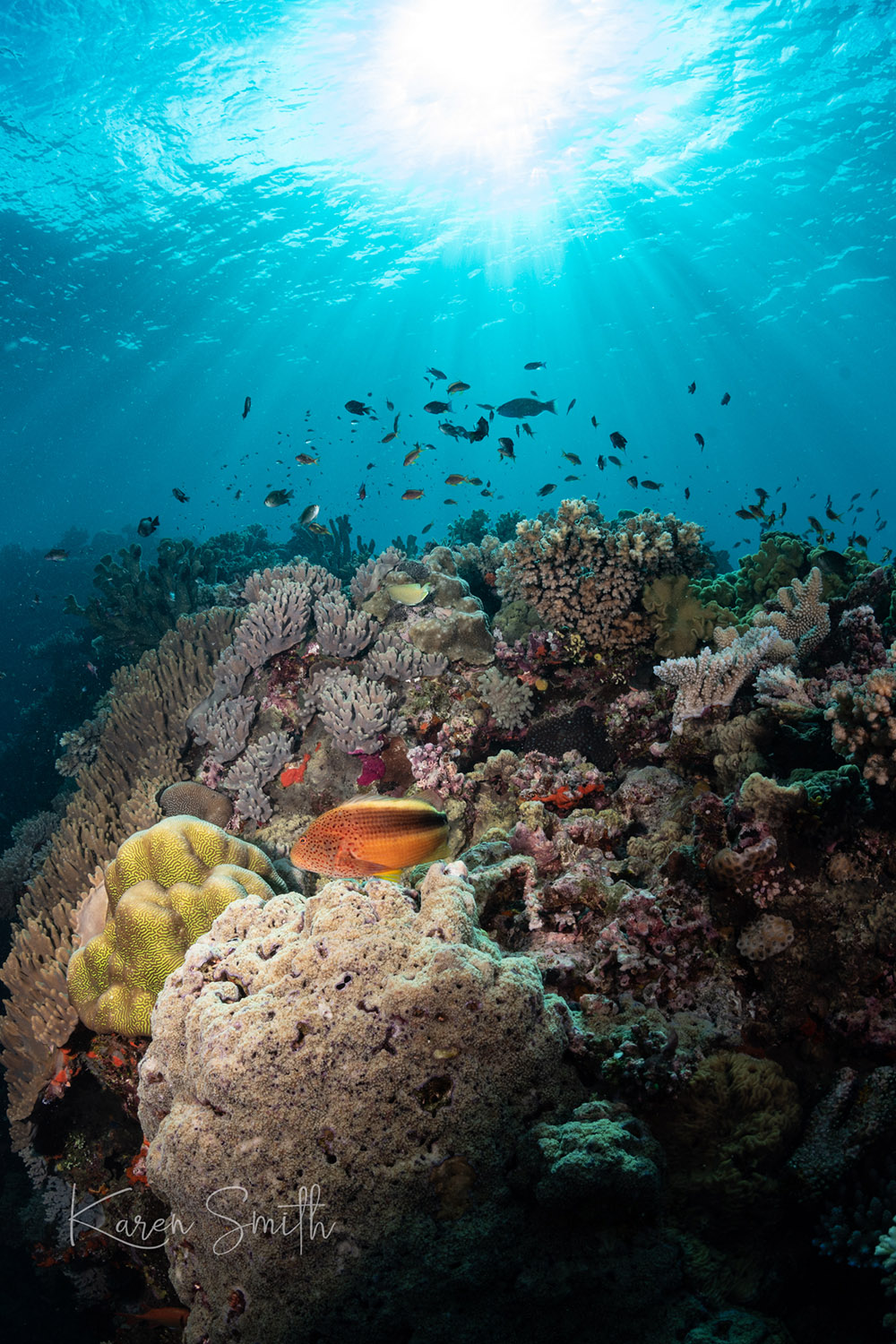 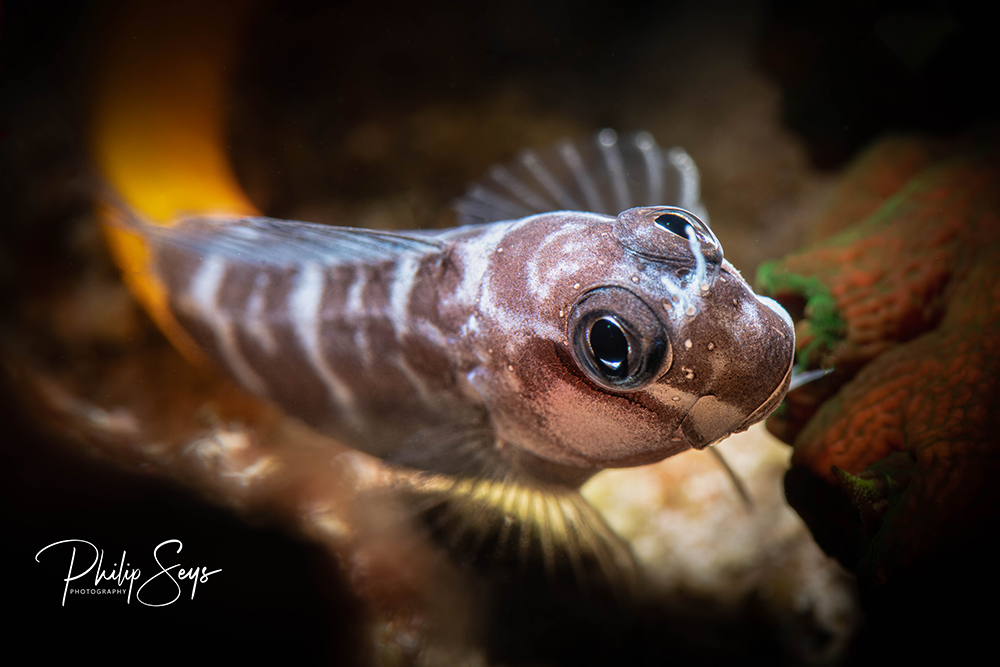 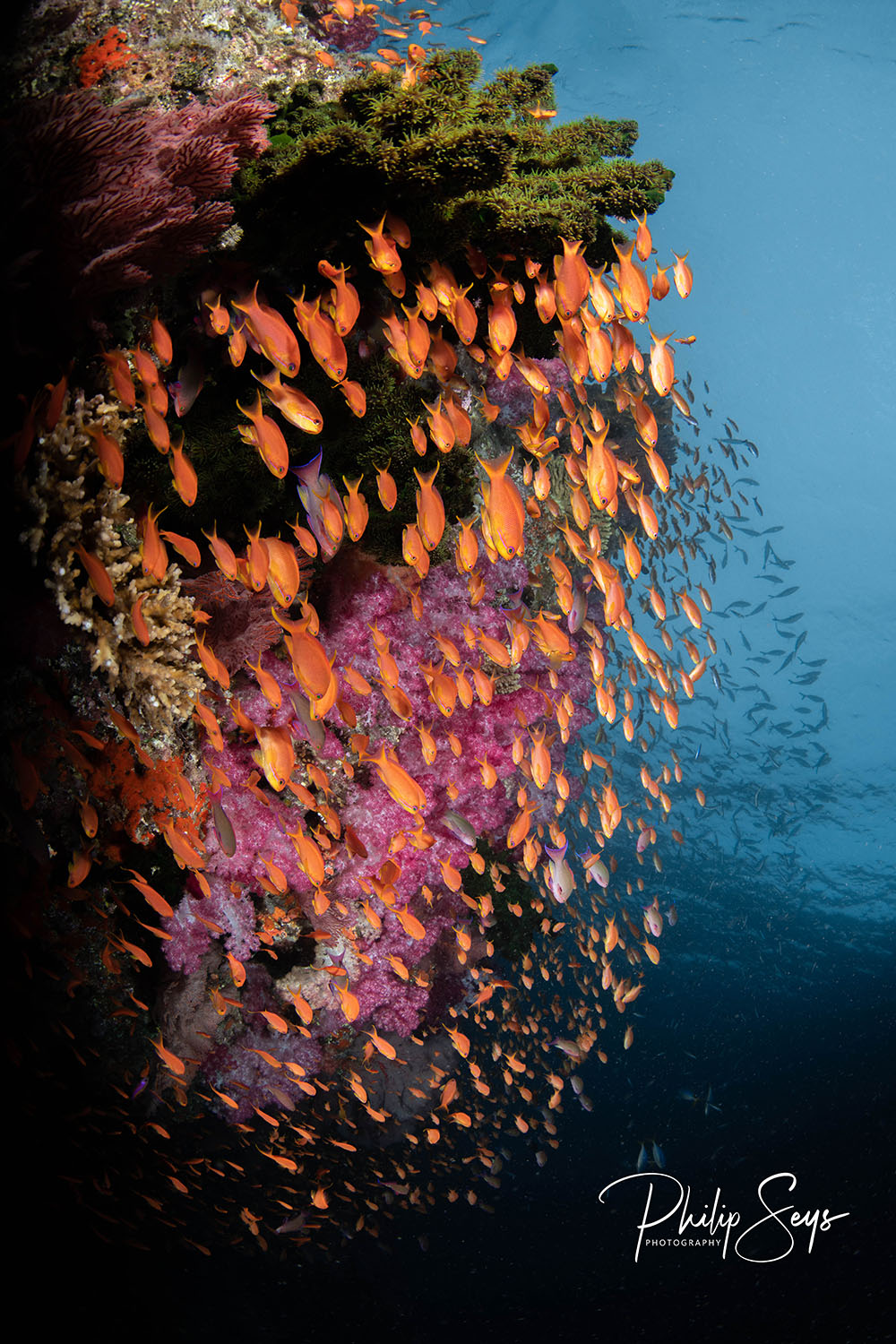 We moved to Namena for two days loaded with the Marine Reserve’s stunning corals and plentiful marine life. We saw gigantic Marbled Stingrays, an 8-foot Hammerhead, Nudibranchs, several Pipefish and huge schools of Oceanic and Redtooth Triggerfish, Schooling Bannerfish, Barracudas (Pickhandle, Bigeye and Blackfin), Bigeye Trevalies and Midnight Snappers. We also sighted big Spanish Mackerels, Dogtooth Tunas and many White Tip and Grey Reef Sharks (as well as a possible Silvertip). On the night dive we saw loads of Squat Lobsters and Shrimp and Mike found another Bobtail Squid. Our Kava party was a highlight of the trip (as always) and Susanne’s Cat in Heat won the Animal song… by far! 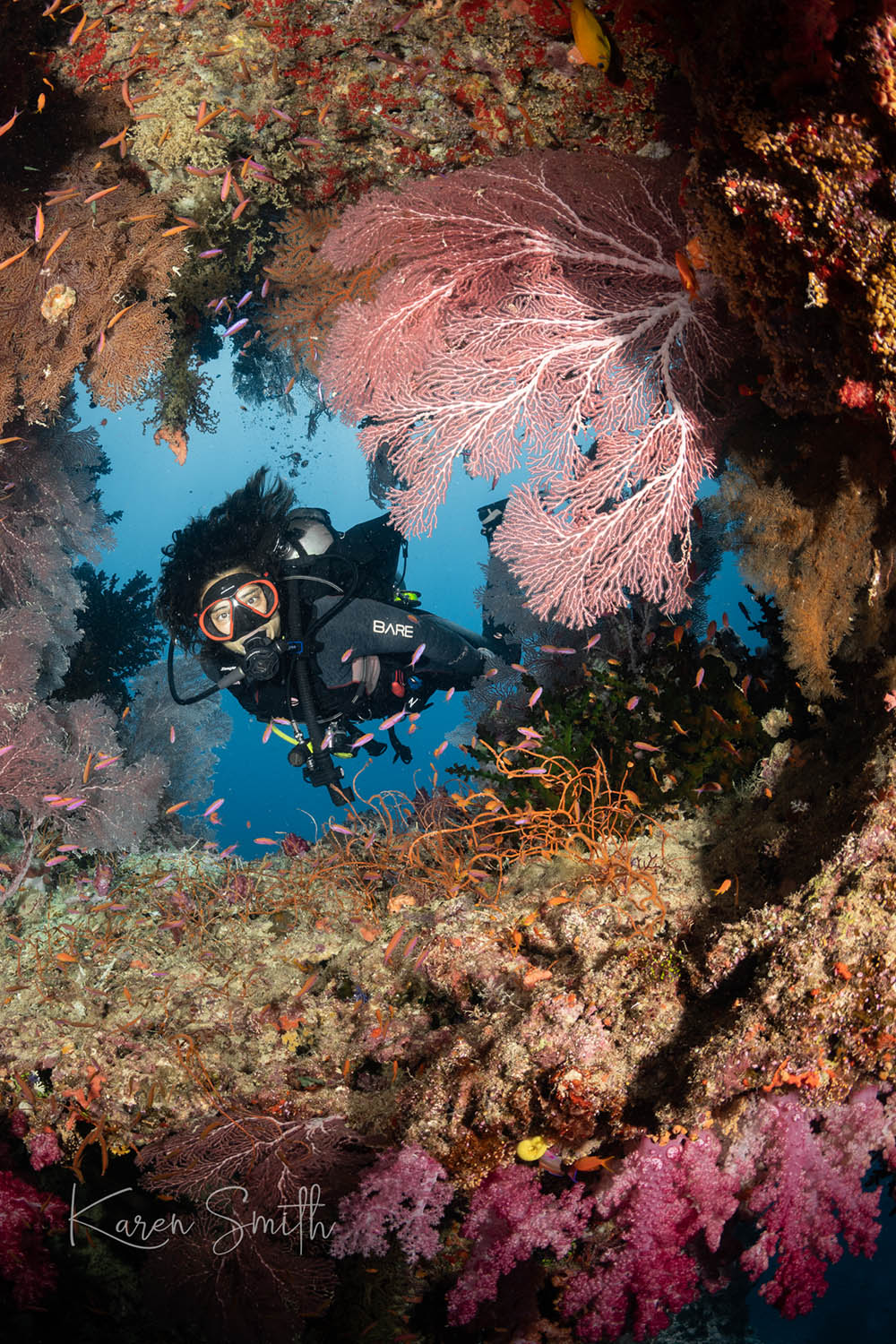 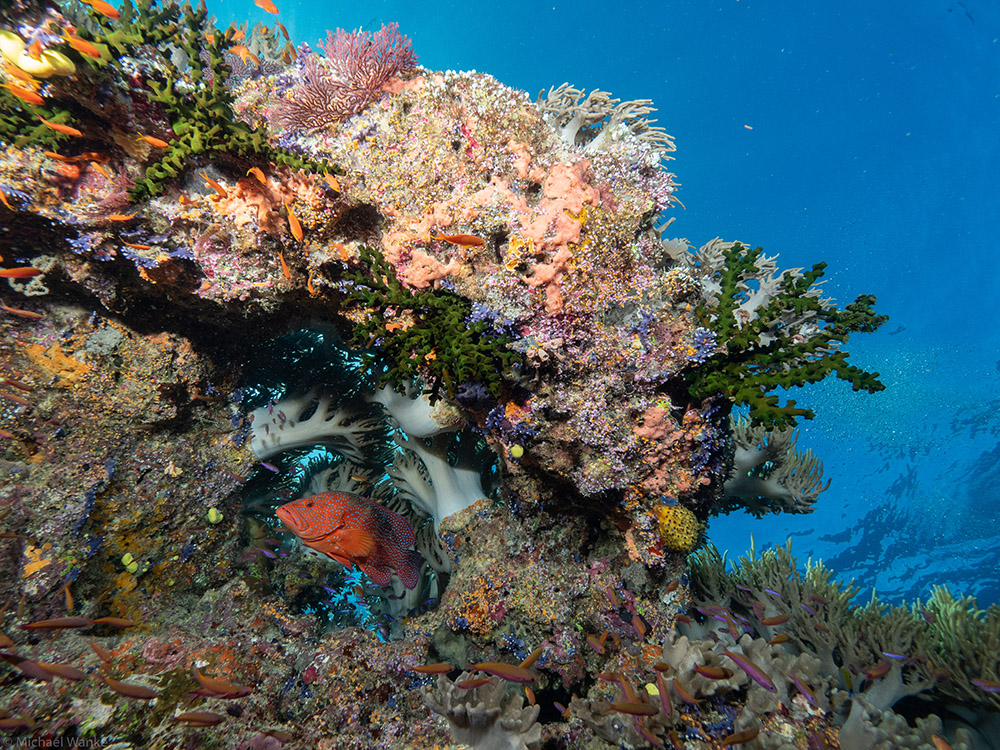 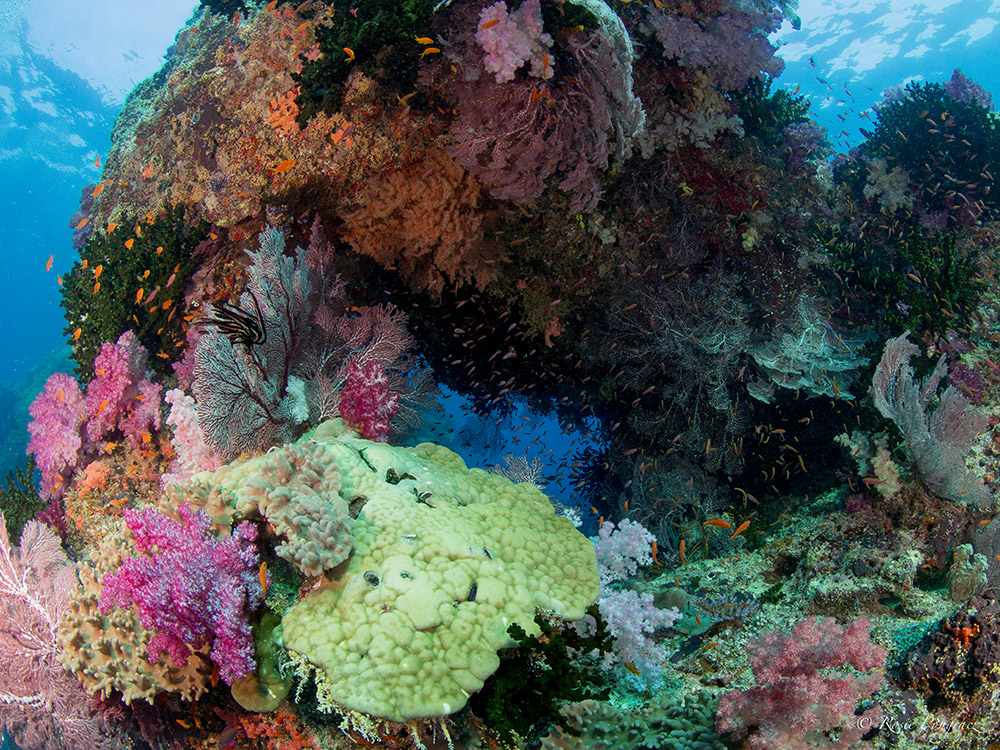 Photo by Rosie Pongracz: The other Kansas Window 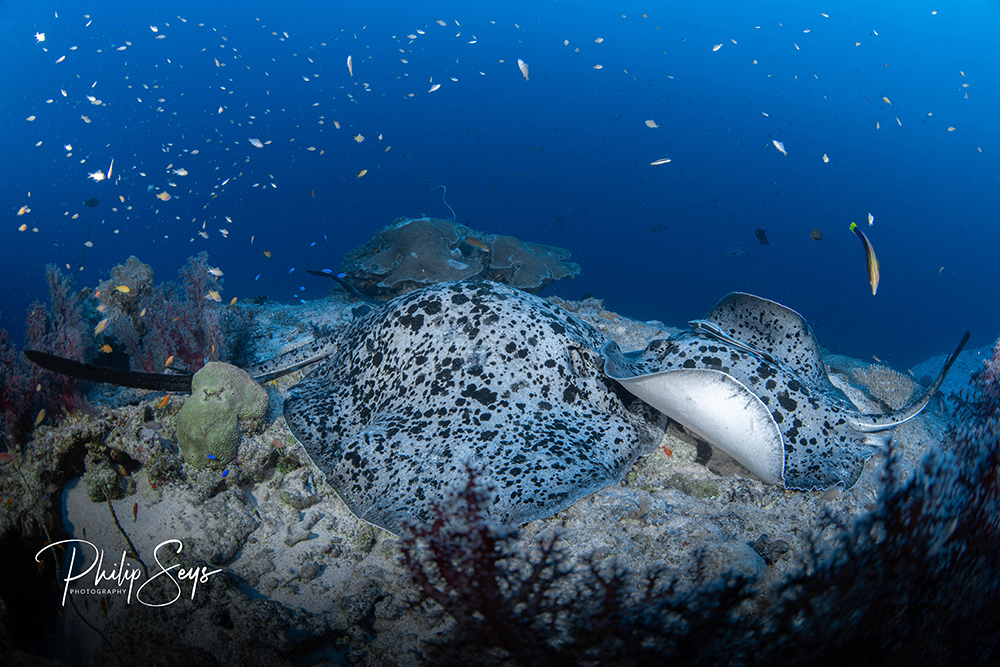 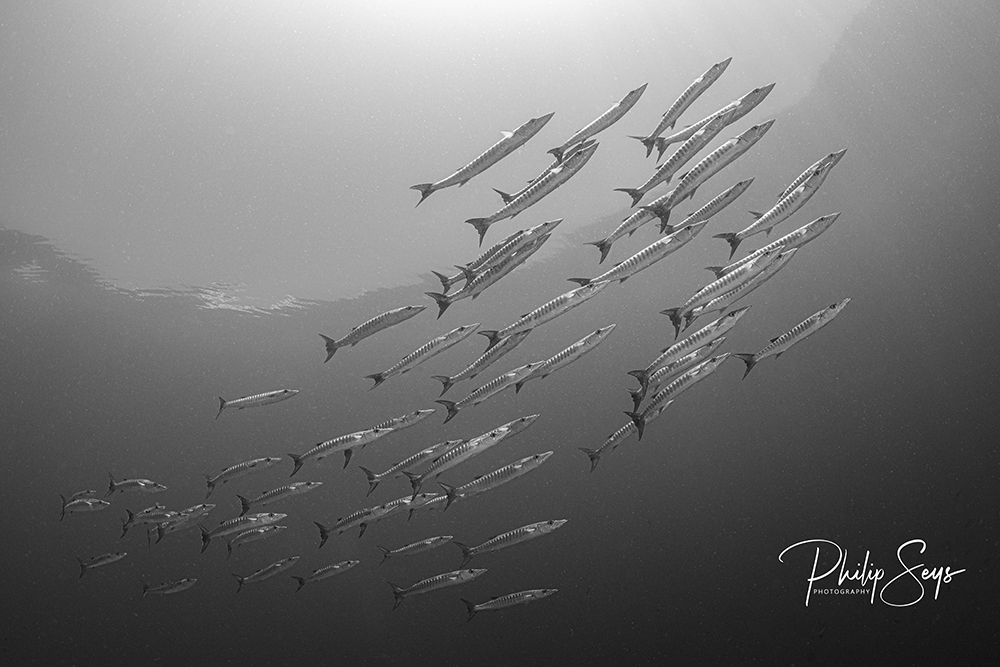 Then we spent a full day diving Makogai’s scenic bommies and sightings throughout the day included active Cleaner Shrimp, many Pipefish, another enormous Marbled Stingray as well as a few Bluespotted Stingrays, Chromodoris Kuniei and Chromodoris Coi (laying eggs!!), Dragonets and Penis Fencing Flatworms. Yes, it’s a thing, google it! Mike was the only night diver with Bel and what a dive they had! Weird Planktonic critters, countless free-swimming Flatworms, Scorpionfish, Porcelain Crabs, Decorator Crabs and Nudibranchs.

That was a tough act to follow, but Wakaya delivered Mantas, Mantas and more Mantas! Rocky and Tasha Angel put on a show at Blue Ridge (after saying HI to the crowd at Lion’s Den) and another Manta danced for 15 minutes at Lion’s Den, then later again at Blue Ridge! They were just everywhere. As a bonus, Mantis Shrimps out in the open, Pavo’s Razorfish, Orange Barred Garden Eels, Sharks, Turtles and Decorated Dartfish. To make it even better, Bel had a modelling session with Mighty Righty’s mighty photographers. The perks of this gig are endless! 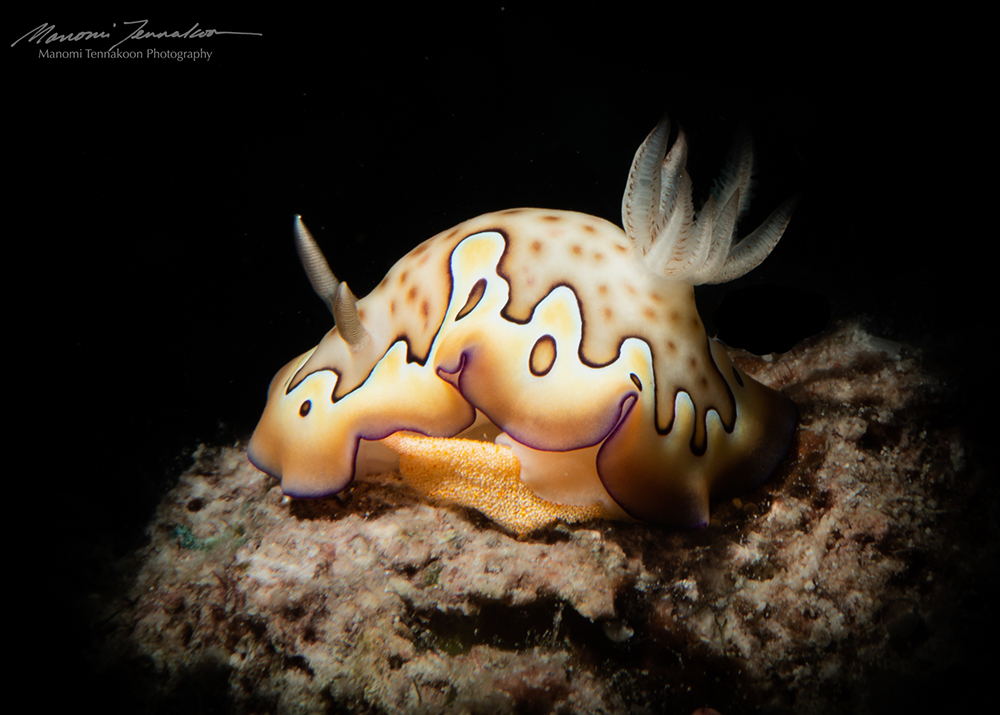 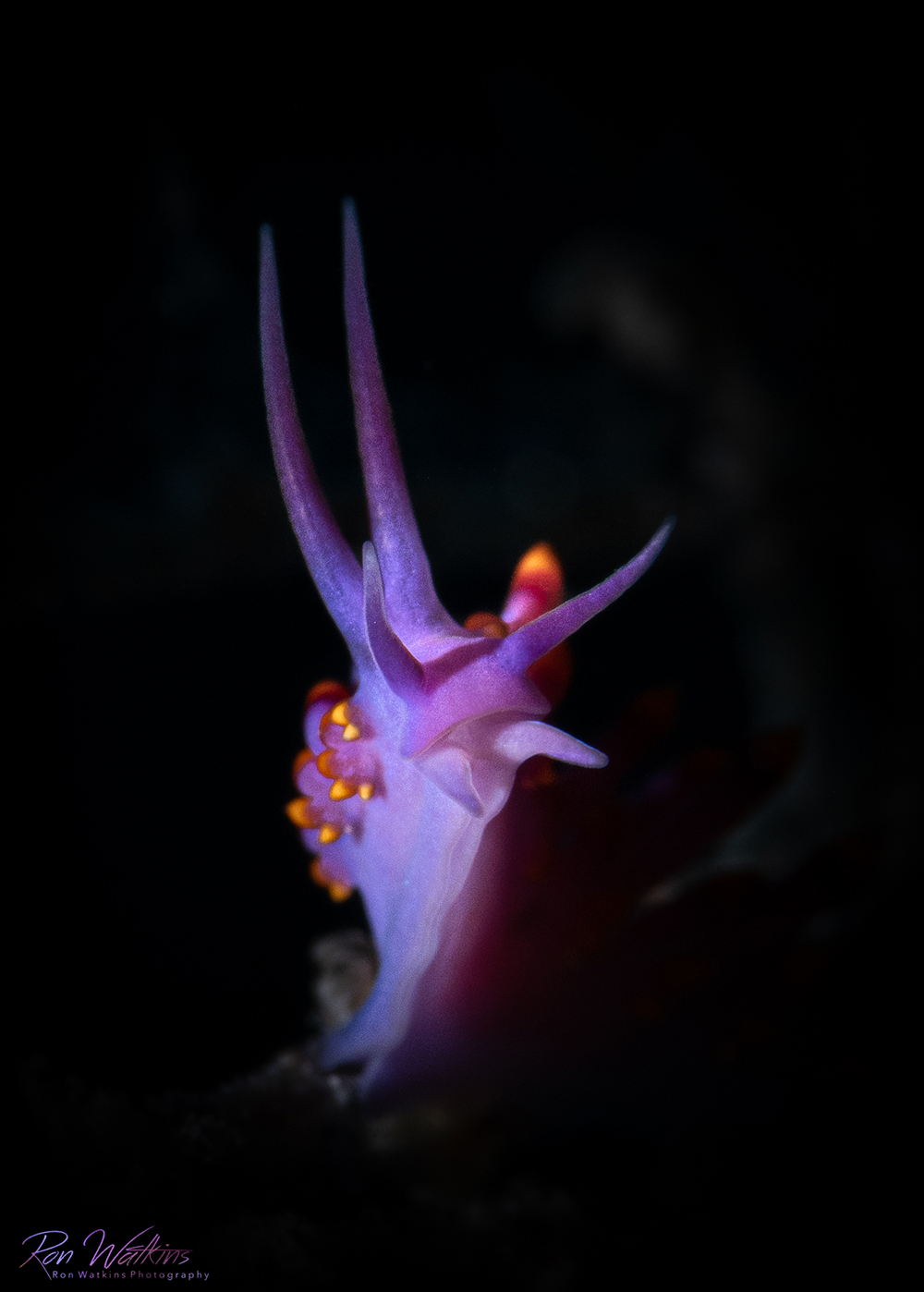 Photo by Ron Watkins: Obi Wan showing how it's done 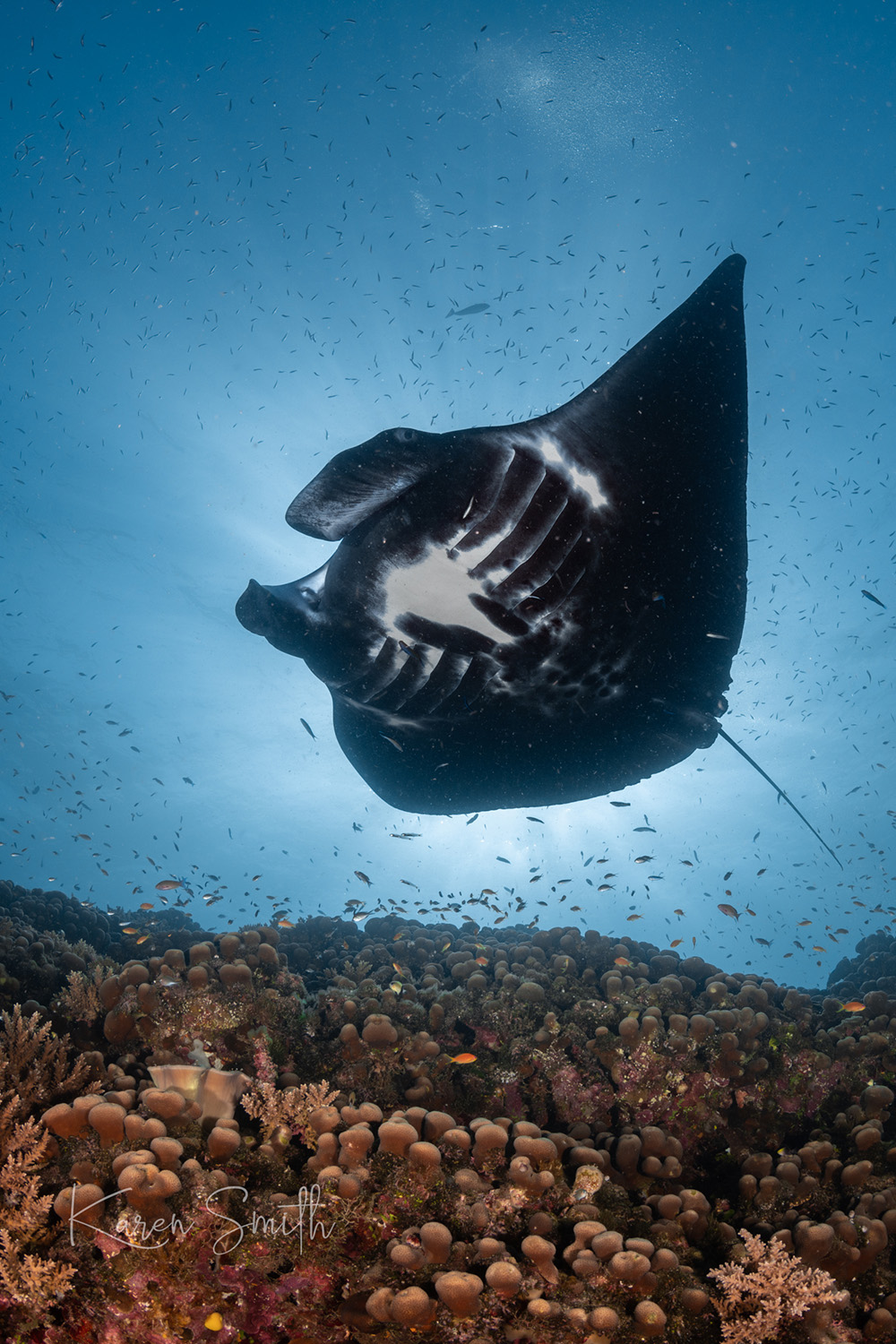 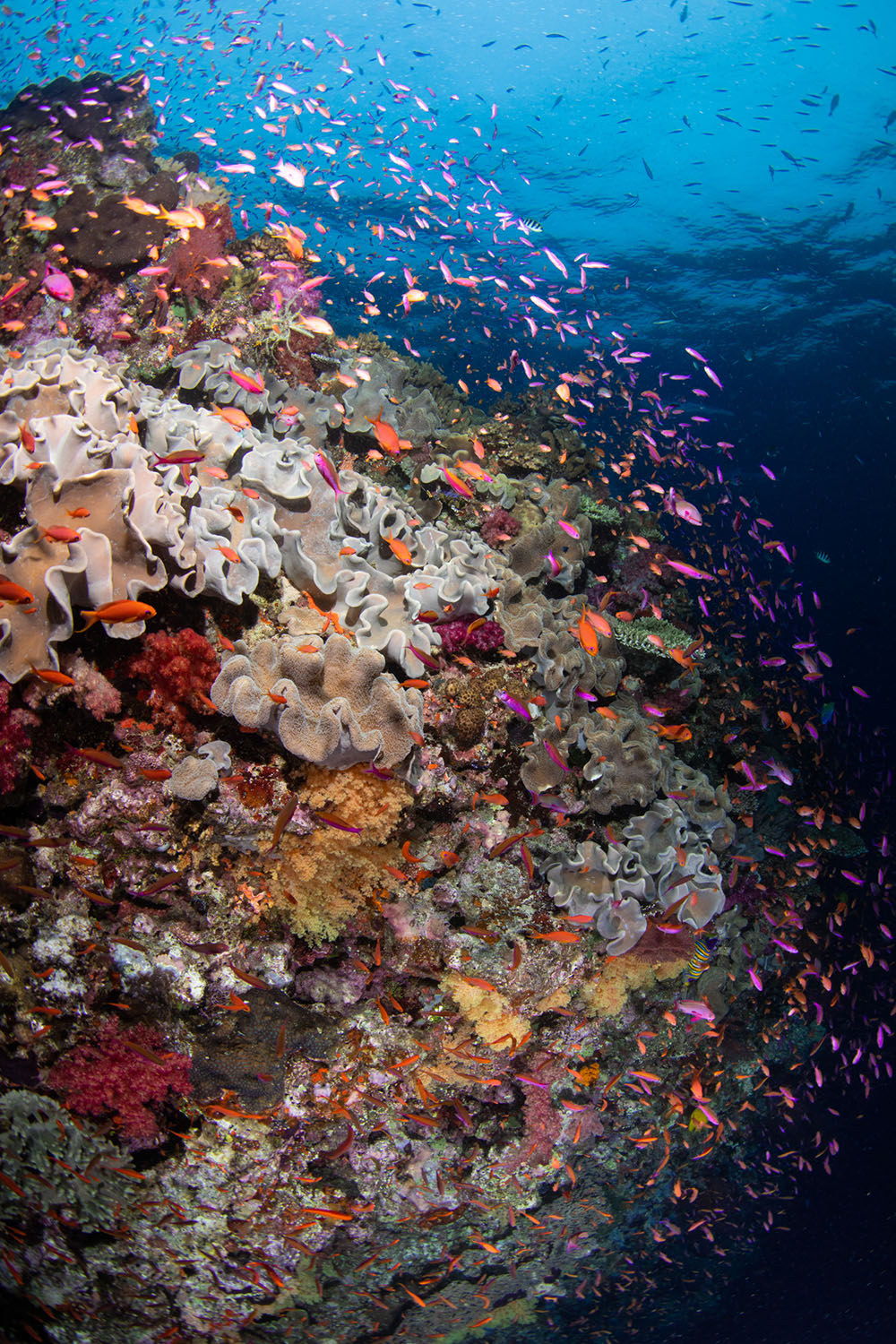 We moved overnight to Gau and Nigali delivered its usual absurd amounts of Barracudas, Midnight Snappers and all the Baby Grey Reef Sharks, plus the adults, many of them pregnant females. Bel even saw a Box Crab on the passage. In the afternoon Jim’s and Anthia’s delivered beautiful visibility, amazing soft corals and a gazillion Fusiliers. The Village Visit was special with the kids being home from school. They were so happy to see pictures Rosie and Anthony had of them from their last trip four years ago. These visits really are special and unique, especially when most of the group joins. 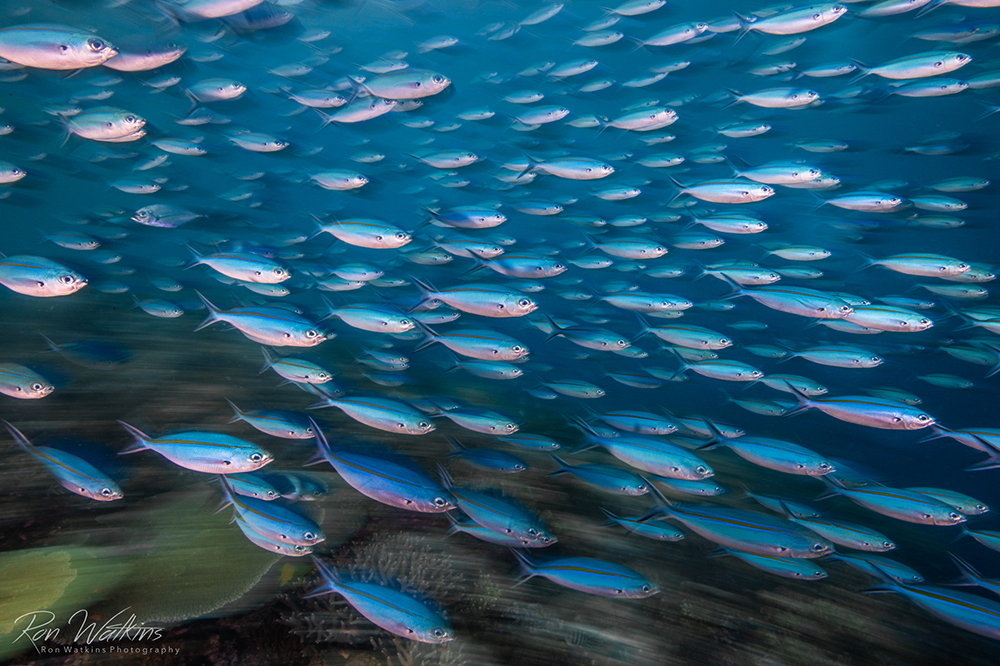 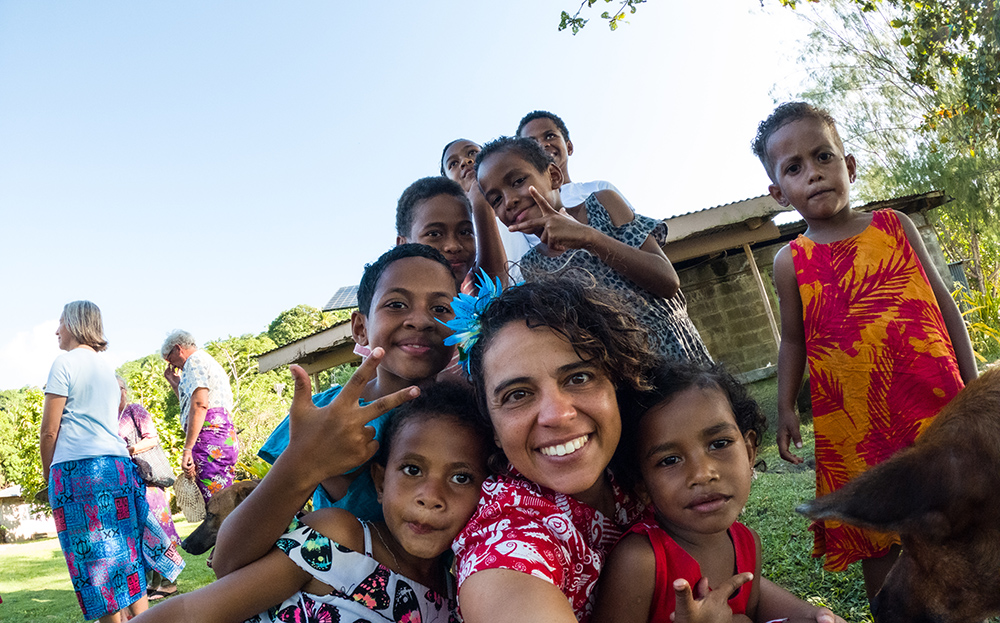 Photo by Bel: Hanging with the girls in Somosomo

The Sea Mounts were as spectacular as ever, and our photographers/videographers had a fabulous time with the mega healthy hard corals, the scenic Cathedral and the colorful Chyronephthyas. The day’s sighting included Scorpionfish, Dragonets, Juvenile Brushtail Tang, Hammerheads (twice!), Octopus, Yellowfin Tuna, Spanish Mackerels, Reef Sharks and even a Silver Tip Shark. As we were on our 4th dive, the ladies that took a dive off got to go on the skiff to see Pilot Whales!! Rosie and Anthony did a night dive with Mo and saw Sponge Crabs, Scorpionfish and Hydroid Crabs. 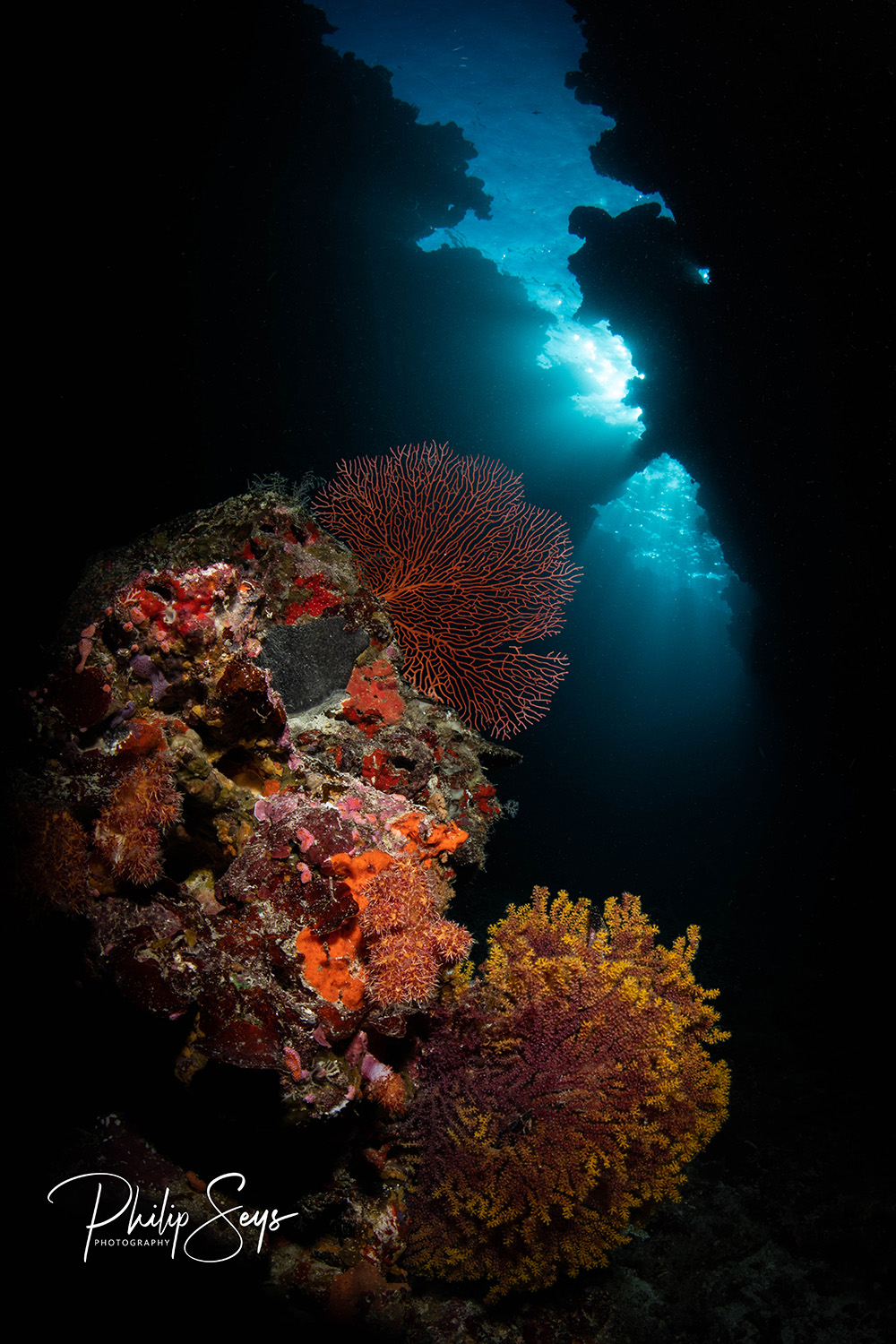 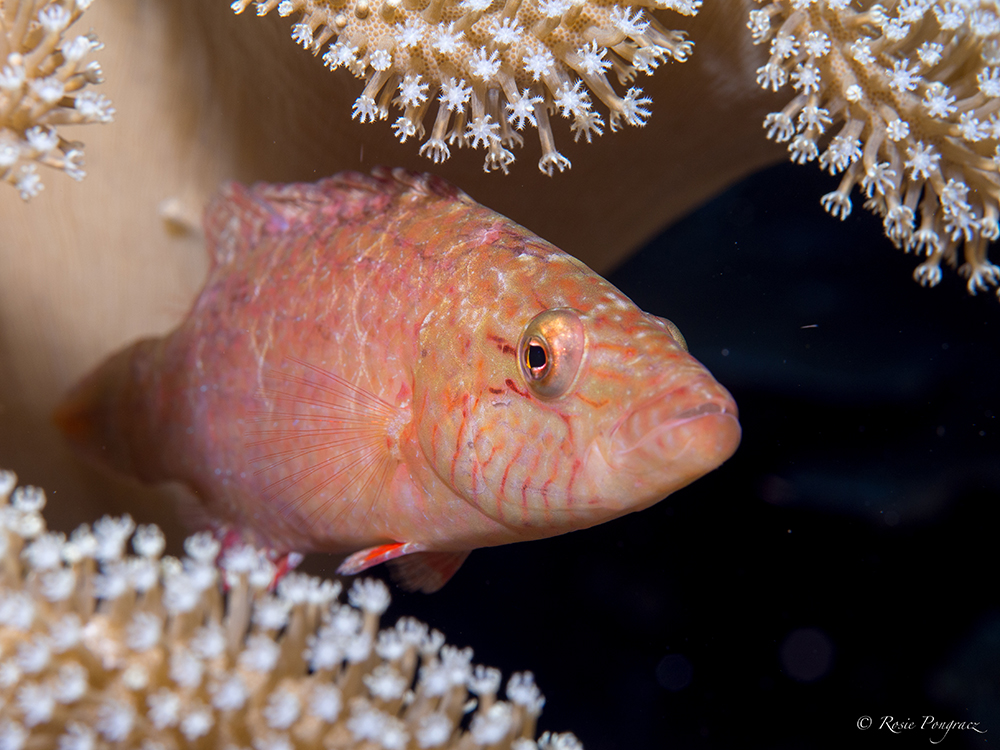 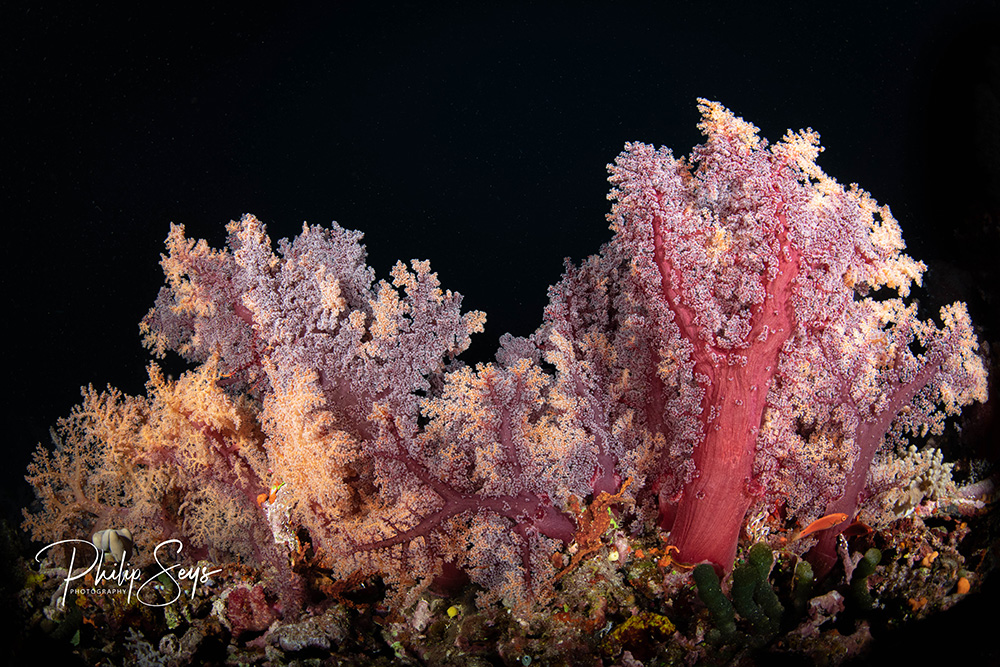 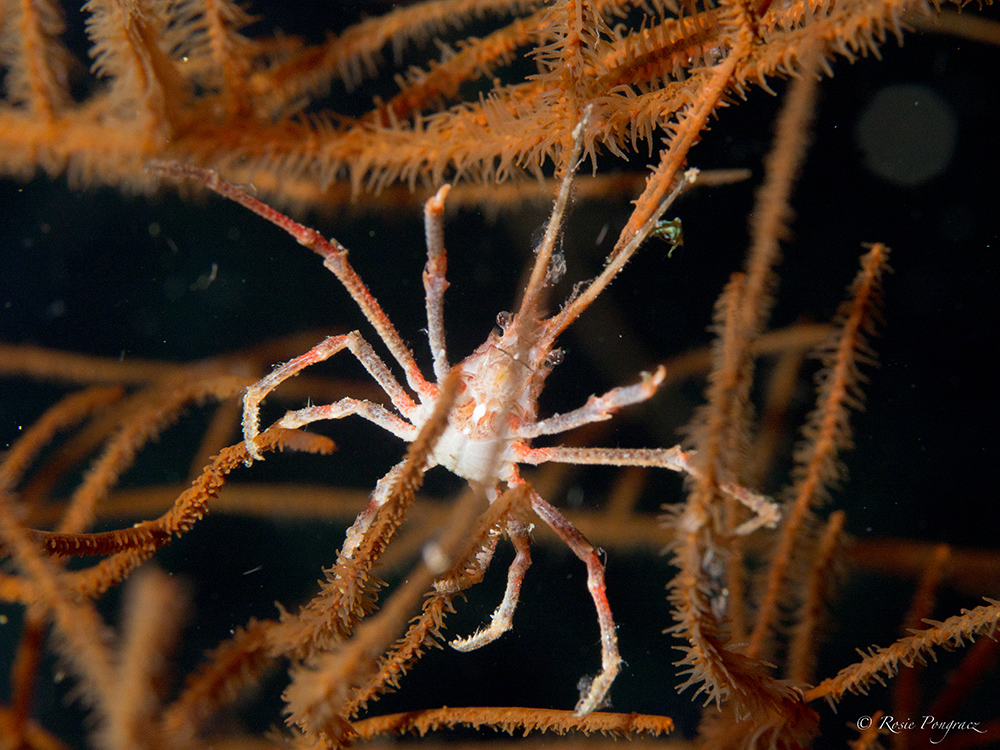 For the last day we dived GoMo with the most perfect conditions, and everyone had such a great time they got back asking if we could do it again. They saw Sharks, Schooling Bannerfish, Barracudas, Trevallies, and all the multi-colored little reef fish dancing on the reef top. Unfortunately the current was too strong for a repeat dive there, but The Whole Shebang did not disappoint and they were also mesmerized by that dive… So we could only finish such a day – and such a trip – with a Mellow Yellow dive. It was super Yellow and perfectly mellow, and so covered with fish it was hard to see the reef at some points. 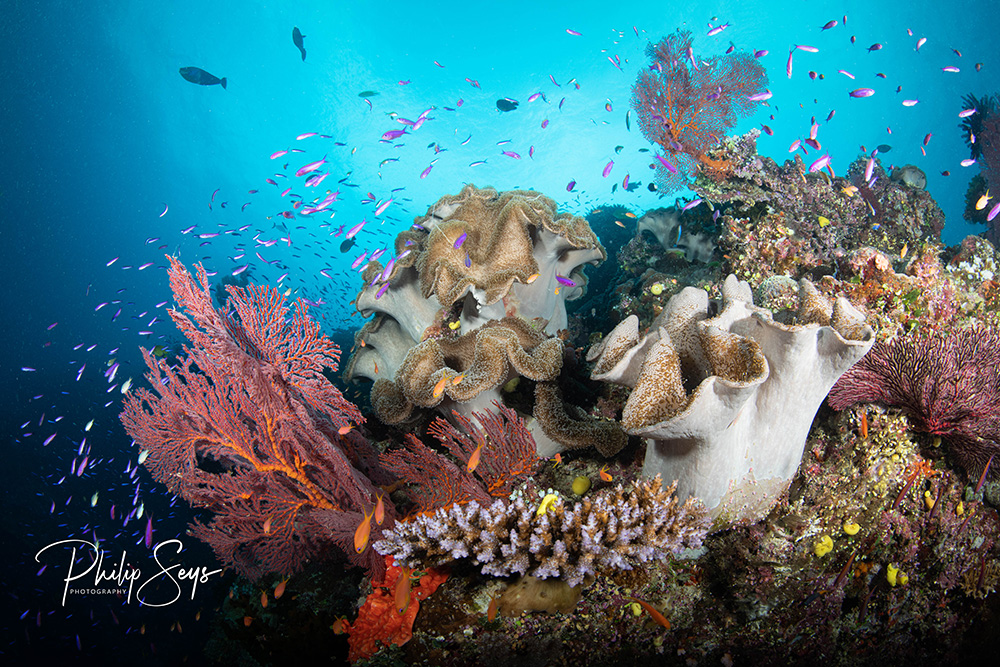 Photo by Michael Wanke: Fiji summarized in one image.

The images speak for themselves and we’ll sure miss having such talented photographers capturing the best of Fiji in such breath-taking pictures. We have enjoyed this trip immensely and are so proud to have awed such experienced divers with the beauty and abundance of Fiji’s reefs. Vinaka, friends. We’ll see you again in a couple of years, or perhaps sooner! 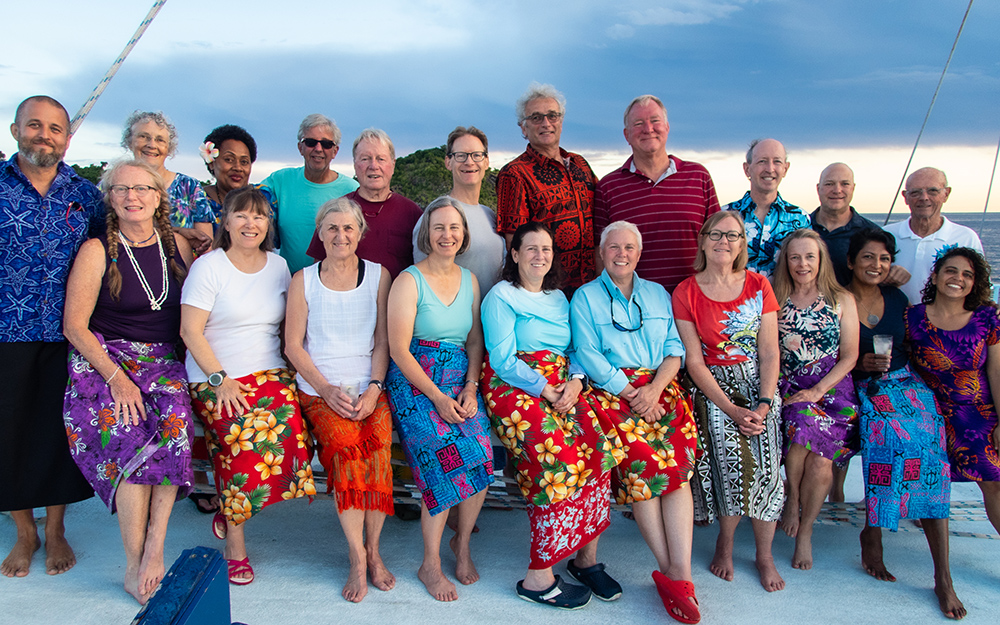 The very talented group. Until next time!