What happens when a group of skiers decides to charter a 14 day trip around Fiji?? Well, they get to explore Fiji’s best dive sites, interact and dance with villagers, hike to waterfalls, bob on river pools, walk on uninhabited islands populated only by birds, eat Lovo and celebrate Halloween and three birthdays back-to-back. It’s not just good, it’s scary good! Mantas, Sharks, Tunas, Trevallies, Nudibranchs, Flatworms, Pygmy Seahorses and Rumengan Pipehorses. Fiji’s reefs have us spoiled for life!

Lead by Graham Abbott and Gary/Eric, our group boarded NAI’A an hour late, as they had delays with their flights due to the weather. Our trip started with strong winds, but these guys endured it well. As they had a full 14 days ahead of them, we postponed their checkout dive to the next morning and sent everyone to bed soon after dinner. 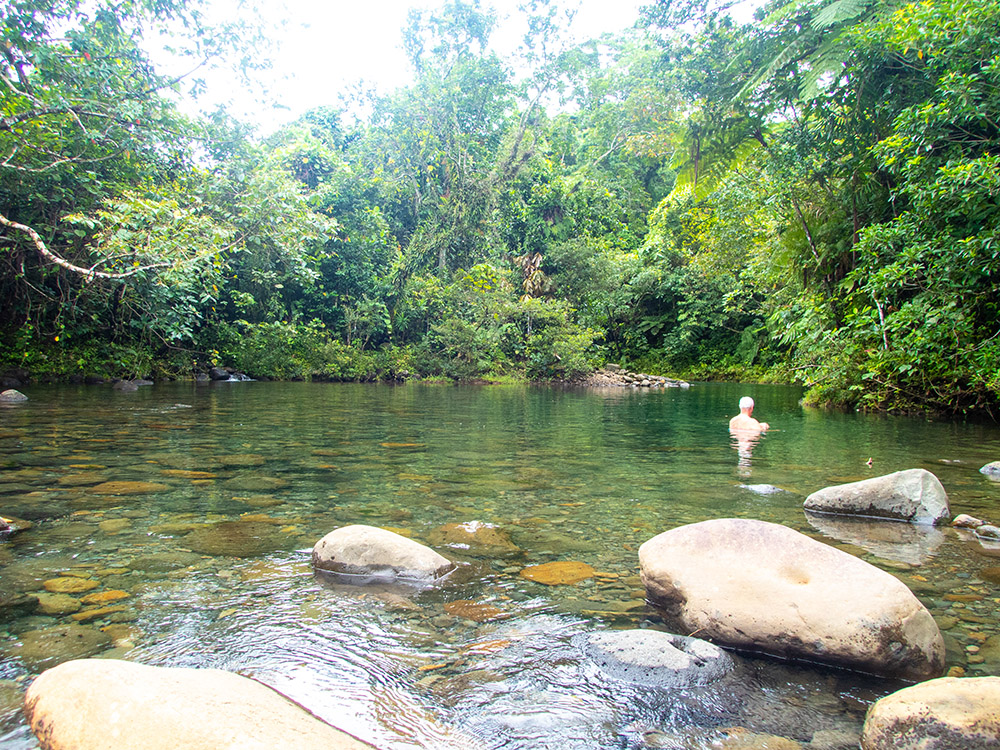 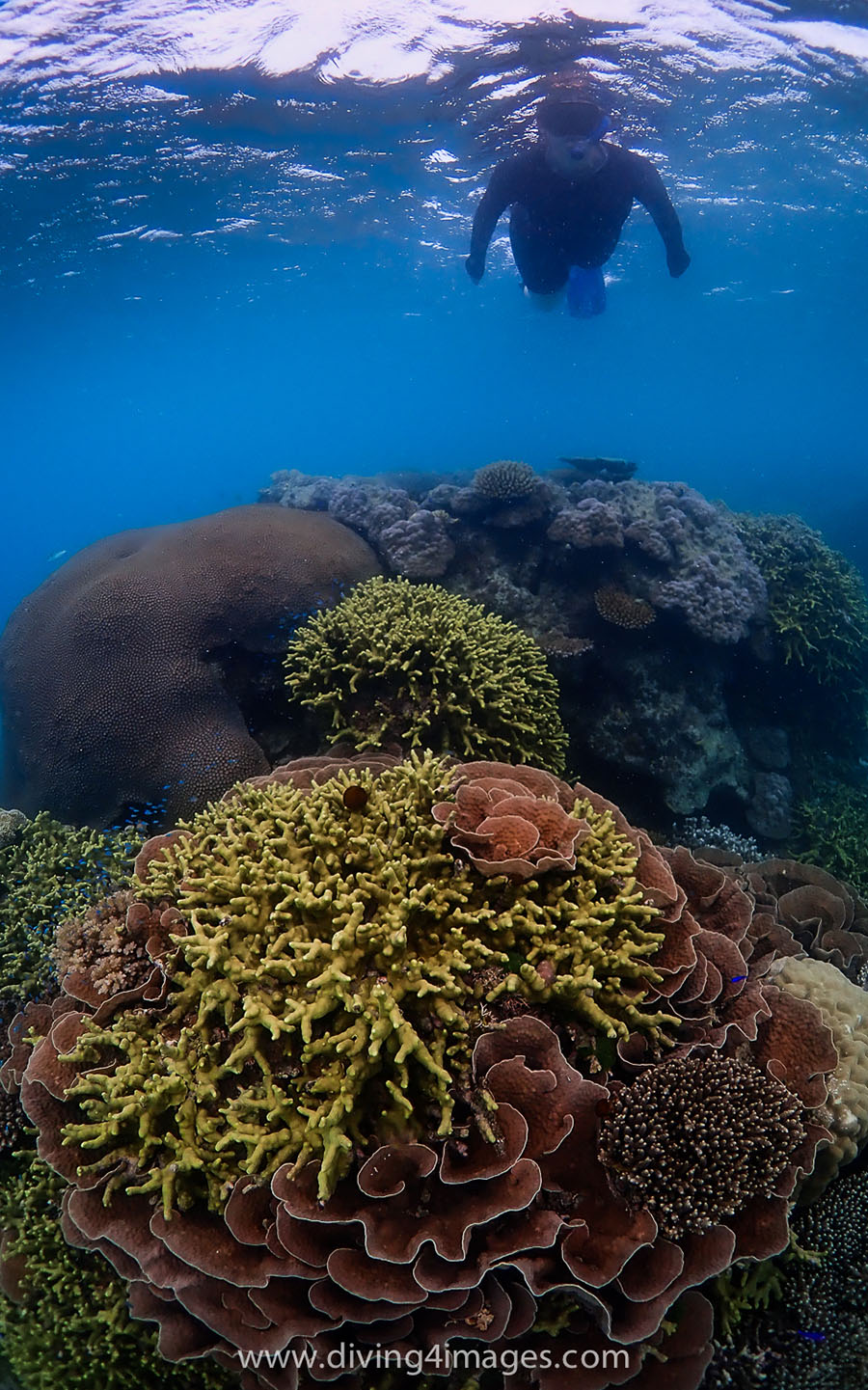 Our first morning was a bumpy and rainy one, but the dives were lovely, right against Vatu-i-ra Island. We saw juvenile Manyspotted Sweetlip, an Octopus, White Tip Reef Sharks, a Turtle, a Bluebell Angelfish, a good assortment of nudibranchs and some stunning corals. Yes, some of the gear was falling apart, but the divers made it through the day, so that’s what matters. In the late afternoon we visited the island and saw all the birds, adults and chicks, nests and eggs. As we returned to NAI’A, a shift in the wind made it for a very bumpy return to the ship, but the crew and guests were wonderful and we all got back on board safely.

We moved overnight to Wakaya and had another one of Wakaya’s Manta filled days. The snorkelers and divers got to see between 6 and 8 mantas, feeding, passing and at the cleaning station. Some of our regulars were there (Shirley and Rocky) and some others we could not get an id photo, despite the close encounters. We also saw 4 Ghost Pipefish, Barracudas, Tunas, a Cockatoo Waspfish and some Scorpionfish. The group had a blast, but the wind convinced them all to opt out of the night dive. 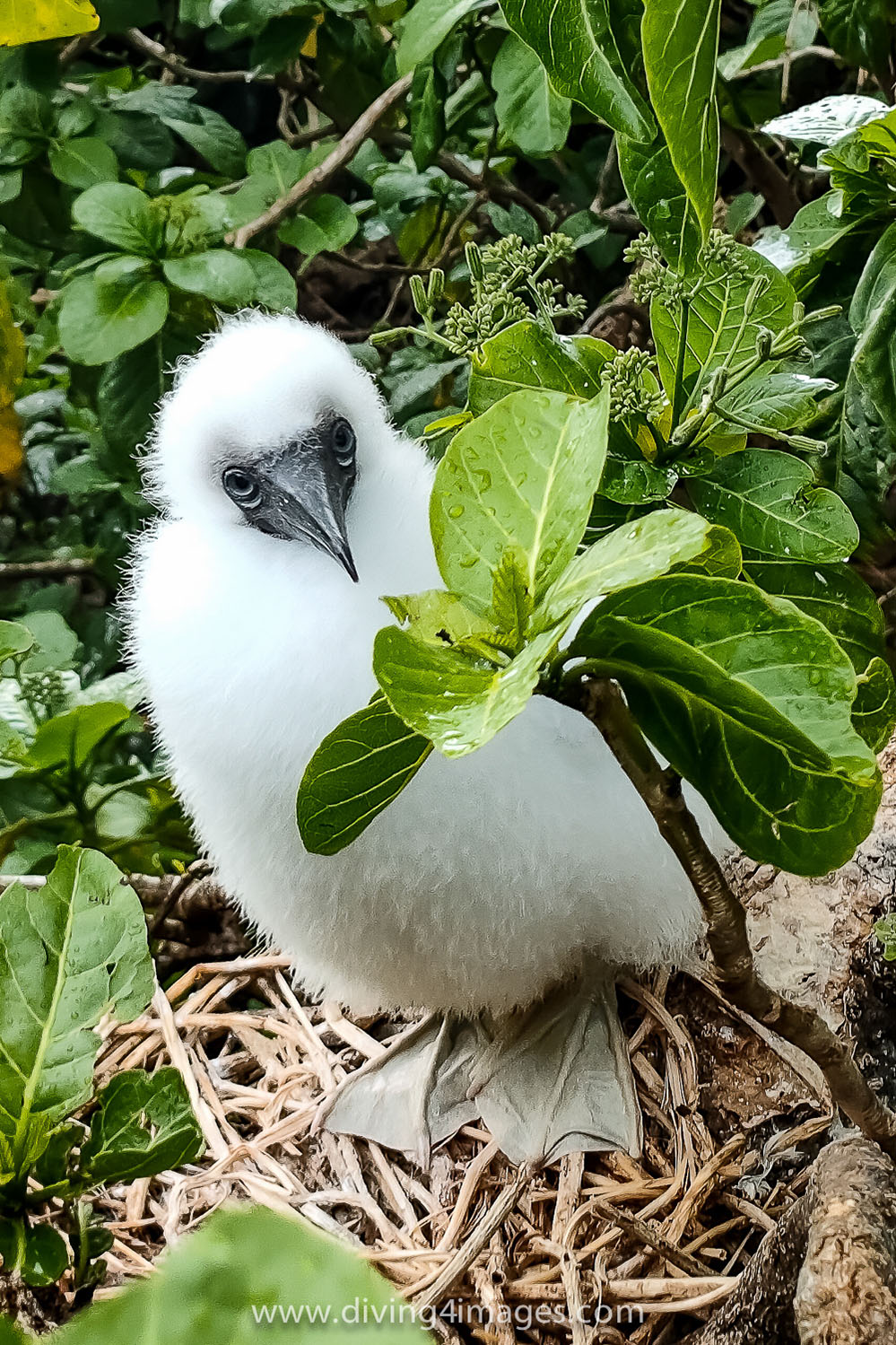 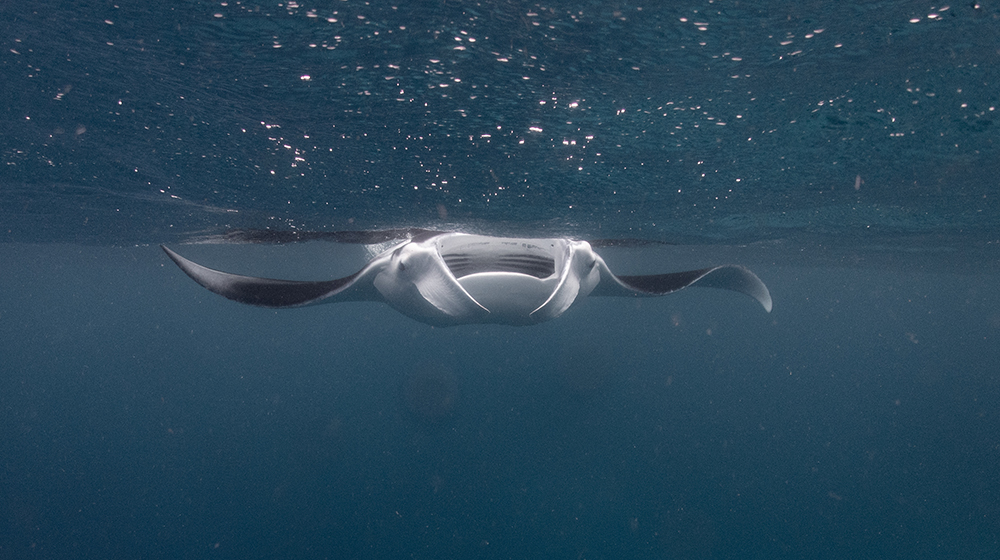 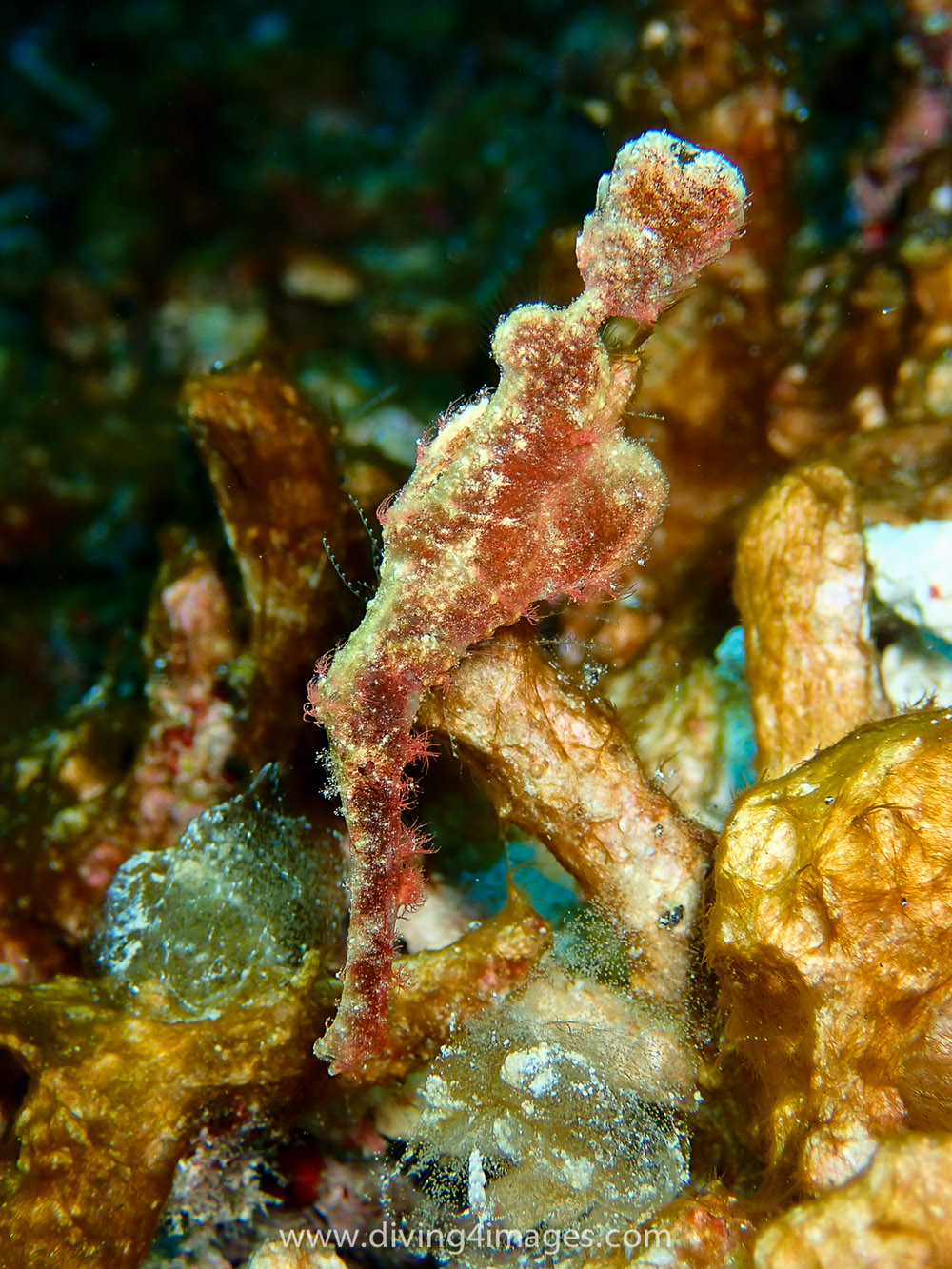 Then we had a full day in Gau that started with a fantastic snorkel session then with our best dive at Nigali so far. It’s enough to say it began with a Banded Sea Krait (spotted before we were halfway down) and finished with an Octopus, but we also had the most Grey Reef Sharks we’ve ever seen there. They were not shy and stayed with us the whole time we were at the bleachers. We always had at least 15 in sight, from big pregnant females to 2.5ft juveniles. And they got SO CLOSE, again and again… It was a tough act to follow, but Jim’s and Anthia’s provided with a massive Humphead Wrasse, a wide variety of Nudibranchs, Giant Morays, a Blue Ribbon Eel and A LOT of color! A day like that could only be followed by a village visit. We were welcomed with open arms as always at Somosomo and the guests all joined for the mekes. Jojo had a lizard land on his head, then go into Margaret’s skirt (apparently it was bigger then she thought) and disappear. The salon filled with laughter after dinner as Trina found out the lizard had followed her back to NAI’A inside her clothes!

Makogai was our next destination and we made the best of a very rainy and surgy day. At Ron’s Delight we saw again many Nudibranchs, Brownbanded Pipefish, Gorgonian Shrimps and our resident Cleaner Shrimps of 4 different species. A dive at Giant Clam provided us with… well, a giant Giant Clam! Then we visited the village, and although we had to skip the tour of the old Leper Colony due to the rain, we had a great time. Joining the dance floor was once again a highlight and Gary got some thong material for his costume. Back on NAI’A, we had an informal kava session as the group prepared for our upcoming Kava Party! 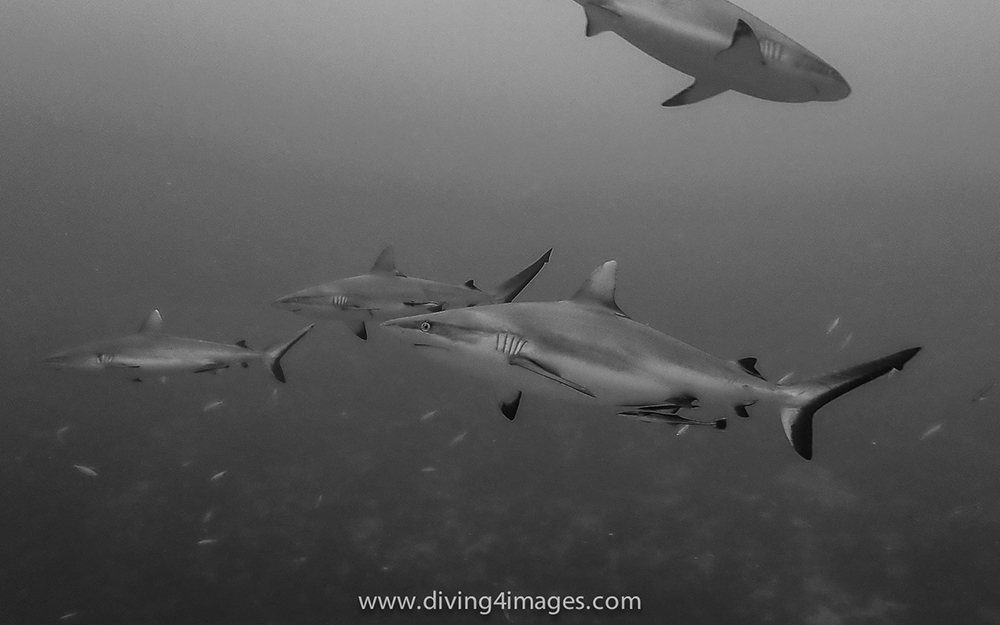 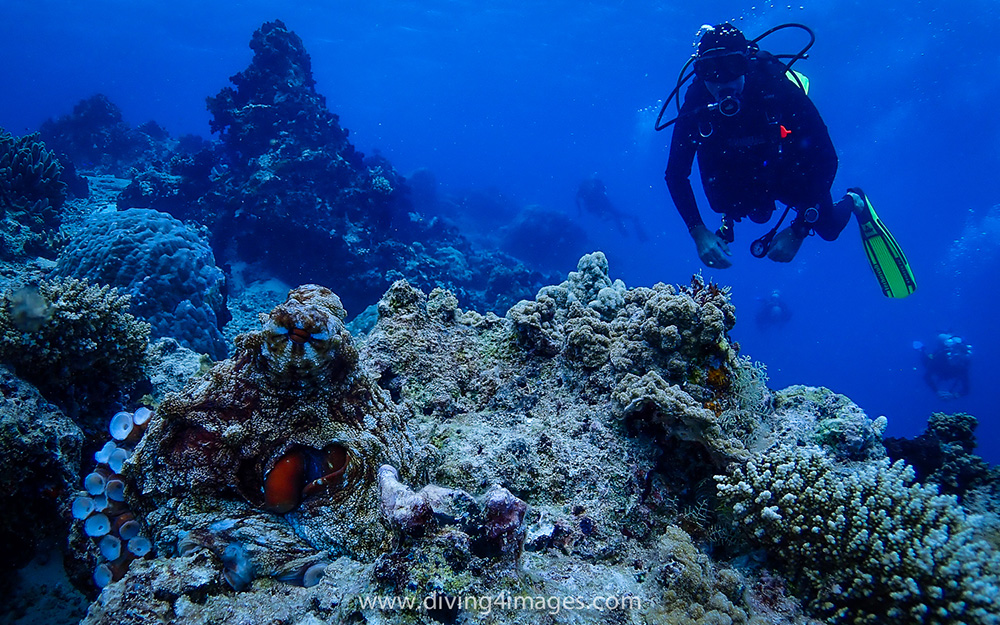 Photo by Graham Abbott: Octopus inside the lagoon, after the sharks and Sea Krait... unreal!! 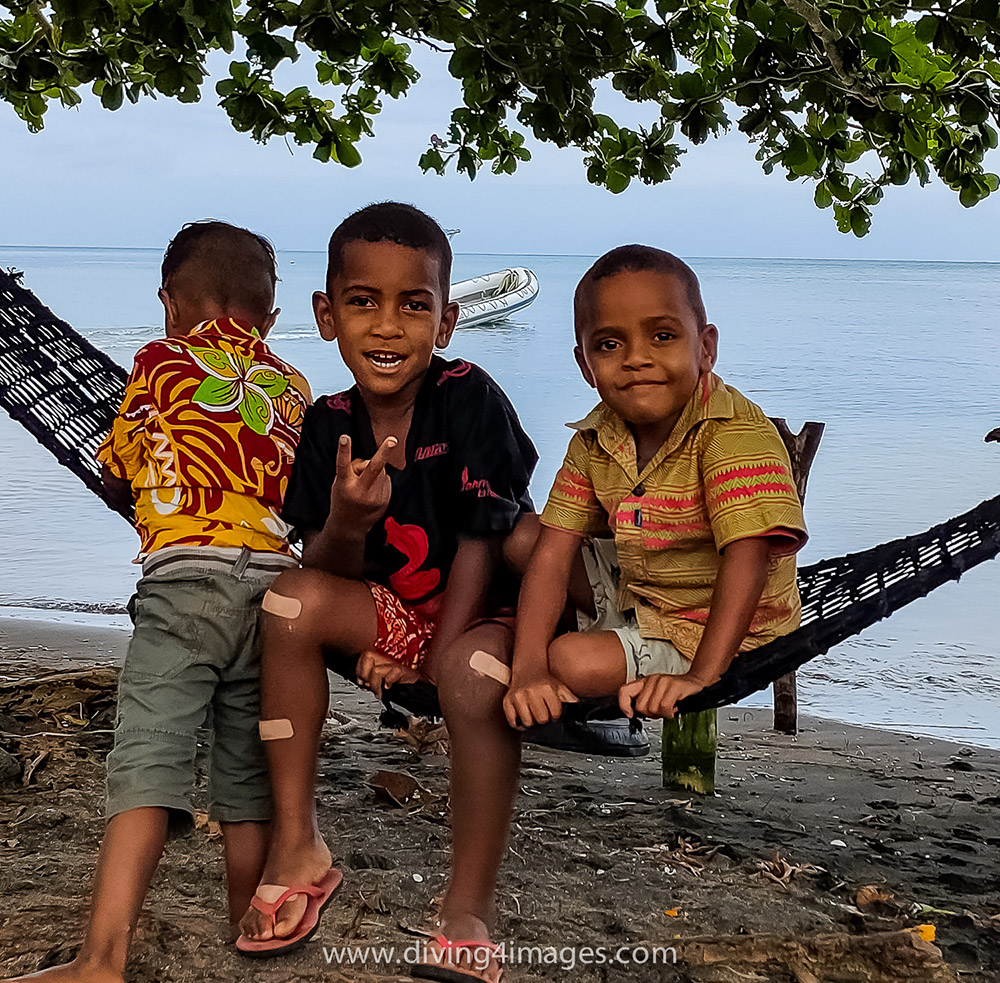 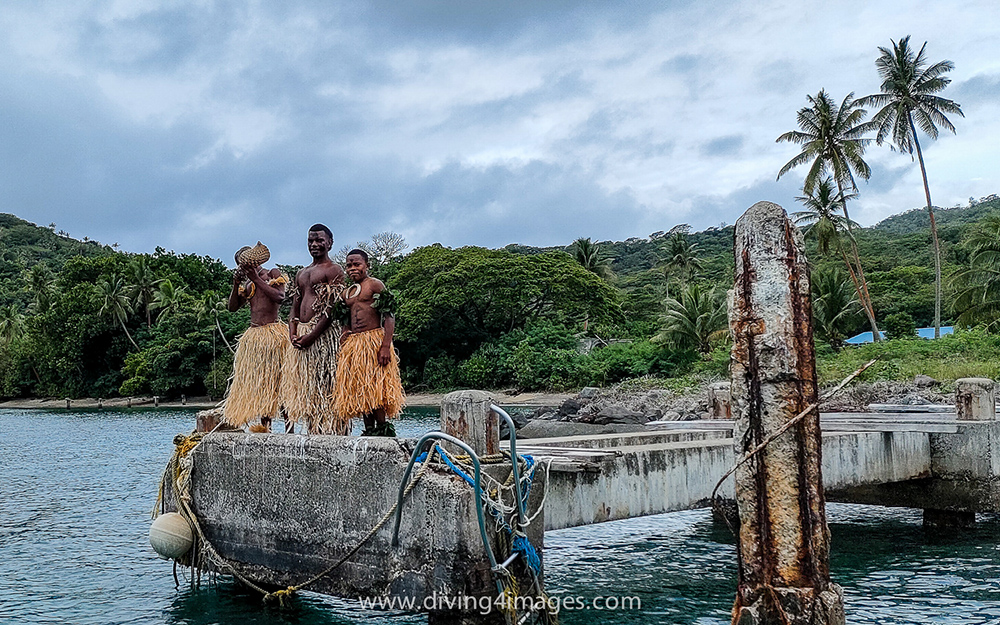 After making sure we had no stowaways from this village visit, we moved to Namena. Our morning dives at South Save-a-tack were amazing, and the current brought out all the soft corals. We saw an Octopus, Nudibranchs, a Mantis Shrimp, Reef Sharks, Midnight Snappers and Manyspotted Sweetlips. The snorkelers saw Clown Triggers, Twotone Dartfish and 13 baby Grey Reef Sharks! In the afternoon we moved to North Save-a-tack and visited Snotty & Phlemmy (the Rumenganis) as well as more Sharks and tons of emperors. We visited the beach and arrived to thousands of Hermit Crabs racing… Trina is sure they were having a big ol’ orgy. Good for them! 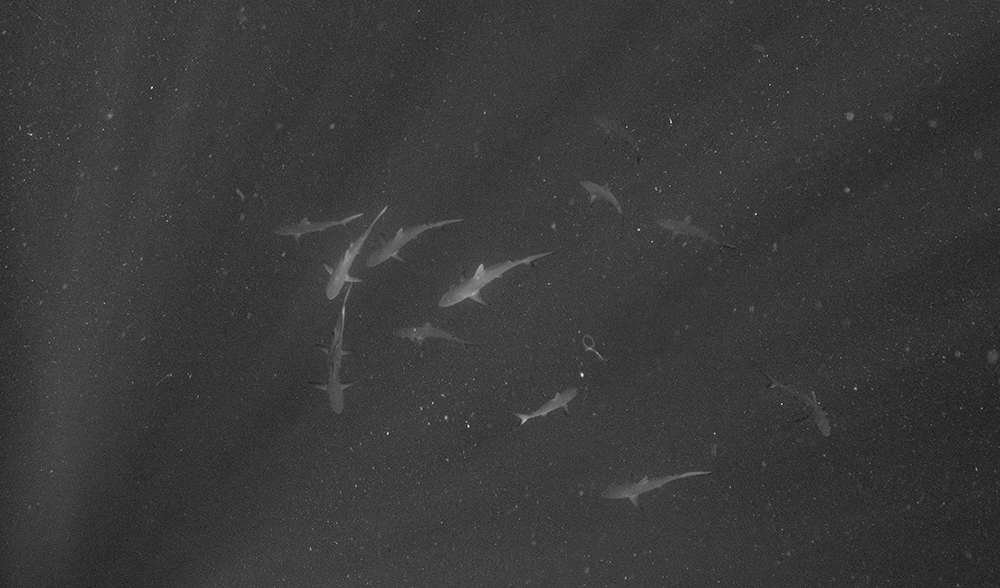 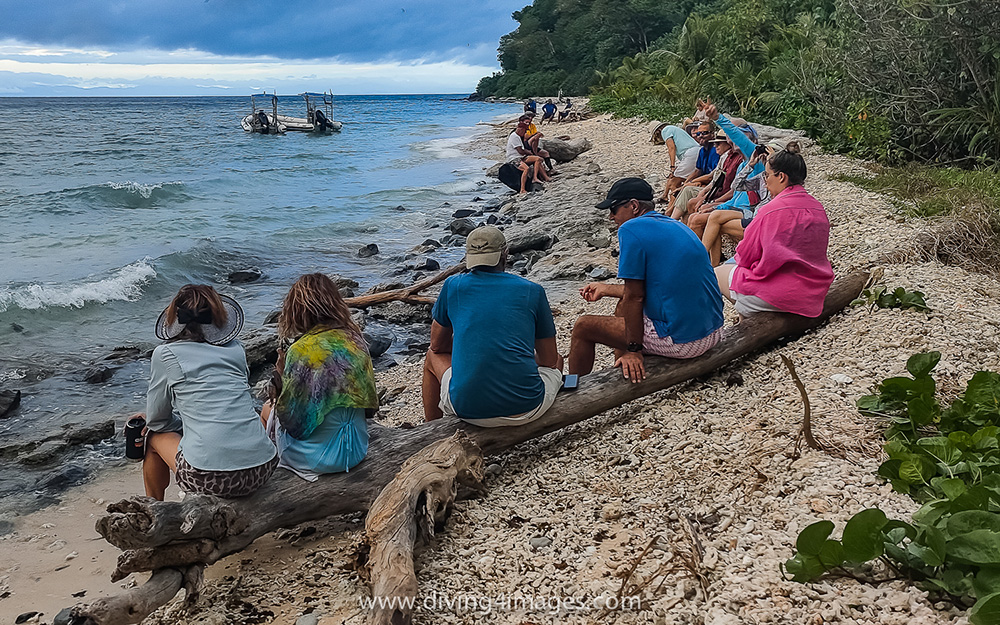 We cruised to Taveuni and dived Fish Factory before moving to Viani Bay for a more sheltered dive and snorkel. We saw an Eagle Ray, a Map Puffer, Flatworms, Longnose Filefish and a Raggy Scorpionfish. We then went for a walk on the bay, but Bel stayed behind elevating her foot, as she had a little bit of a quick descent on the stairs. Some guests used our SUPs and entertained the crew with multiple falls… it’s a good thing these skiers are used to falling! Our Kava Party was once again a highlight of the trip, and Gary called Kava Time after every song. The silence in the salon the next morning said it was a bold move… perhaps too bold.

Theresa day started without Theresa on our first dive at Rainbow’s End (she was busy eating her stashed chocolate mousse). The wild current opened all the soft corals and brought about lots of Fusiliers, some White Tip Sharks and Redtooth Triggers. At Jerry’s Jelly, the current took everyone for a fun ride through Humphead Wrasses, a Turtle, Nudis and Juvenile Rockmover Wrasse. We finished with a fabulous dive at the Great White Wall then cruised to the north tip of Taveuni, where some guests kayaked to the beach… apparently a safer way to move than the SUPs. Margaret weaved all day, inspired by Enele and his basket. 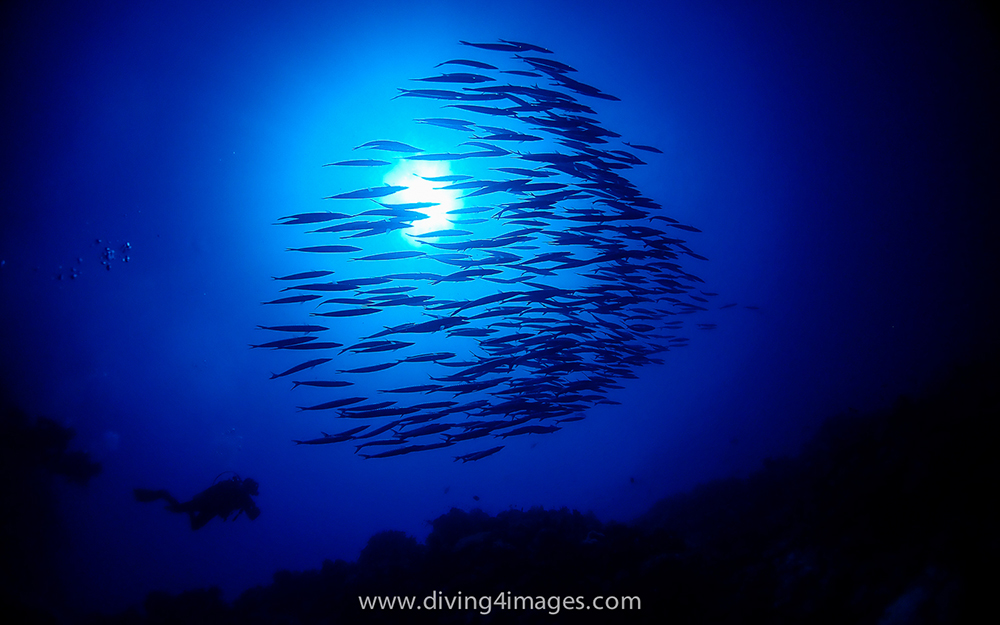 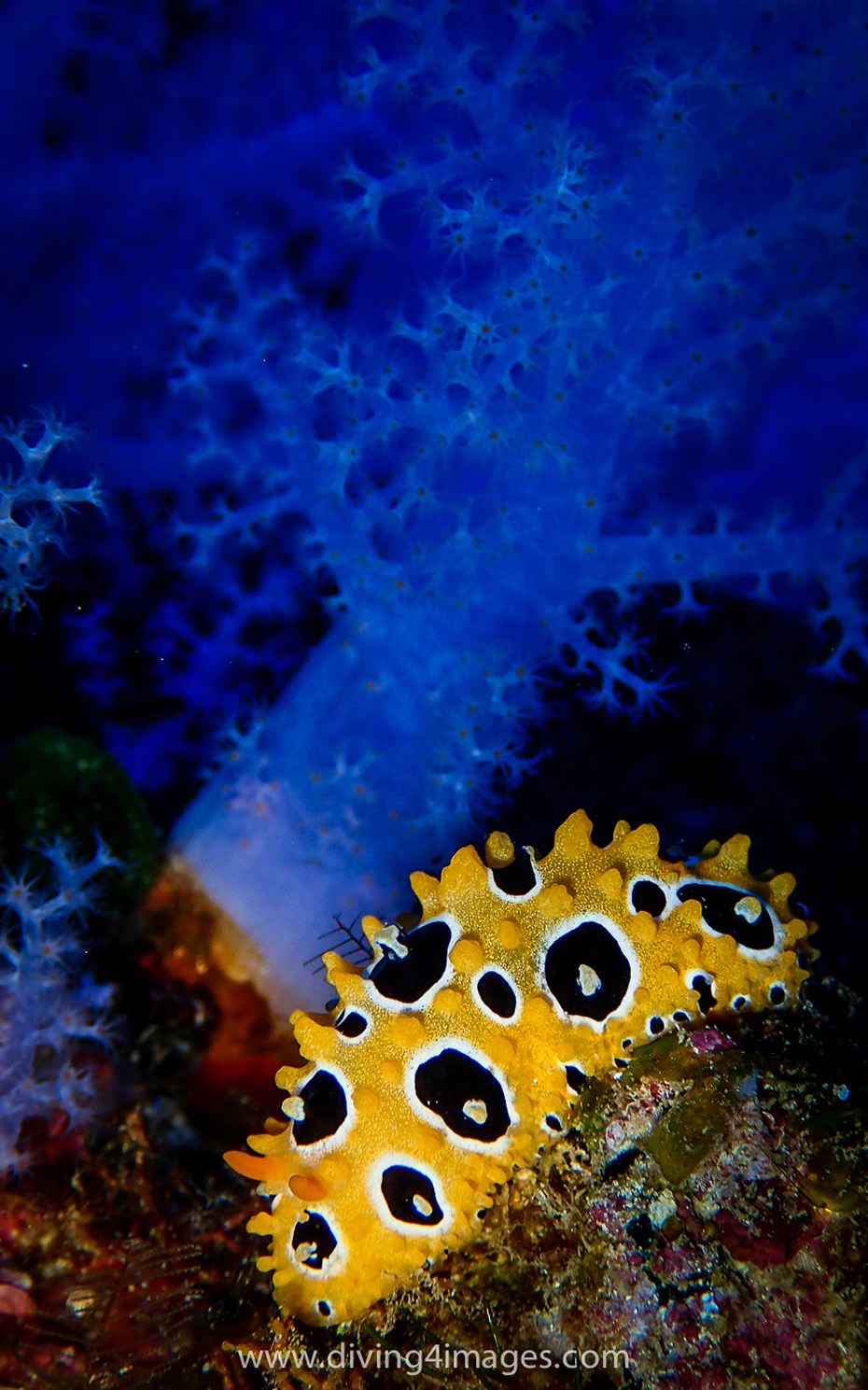 We spent HolleyDay in Wailagilala diving with Sharks, huge Groupers and gorgeous Cabbage Corals at the passage. After lunch we all headed to the beach for some hiking, kayaking, swimming and just relaxing as we watched the crew prepare our Lovo dinner. Simi and Enele weaved, Vernon and Lino foraged wood for the fire, Vili prepared the food… it does take a village. But it was incredibly delicious, and the perfect dinner for Holley’s birthday celebration!

Photo by Mike: Wailagilala all to ourselves!

Photo by Bel: Simi and Enele weaving for our Lovo 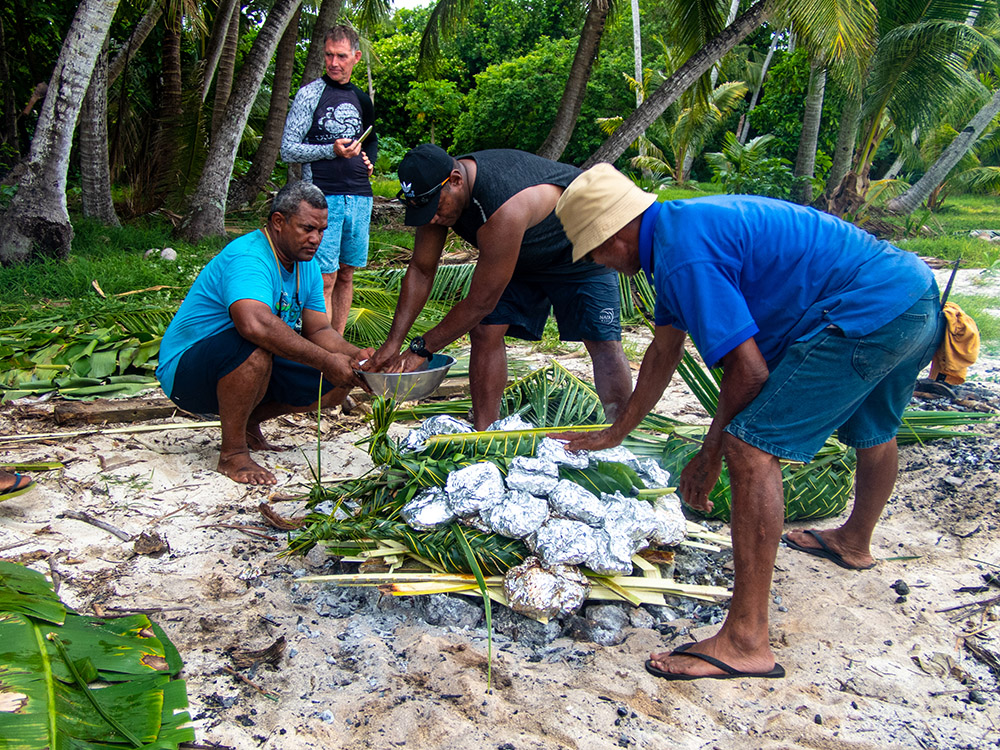 Photo by Bel: Lovo is going in, it takes a village!

Then it was Gary day, and what a day it was! We started with a dive at Champion’s Rock filled with Unicornfish, Fusiliers, a few Crown of Thorn Seastars, Octopus, White tip Sharks and a few Dogtooth Tunas. After that we had breakfast then headed to do the Lavena Coastal Walk. An hour van ride through Taveuni’s luscious green scenery brought us to the beginning of the trail. The disabled (Bel, Jojo, Rob and Margaret) took the boat ride (and got to see a different waterfall) and the others did the hike to the taller waterfall. We had lunch back at the visitors center and headed to NAI’A… exhausted! Big Mo, Koroi and Mogee played and sung for us during sunset and after dinner Gary was happy to have the HAPPY BIRTHDAY sign in the salon removed… 3 back-to-back is just too much! 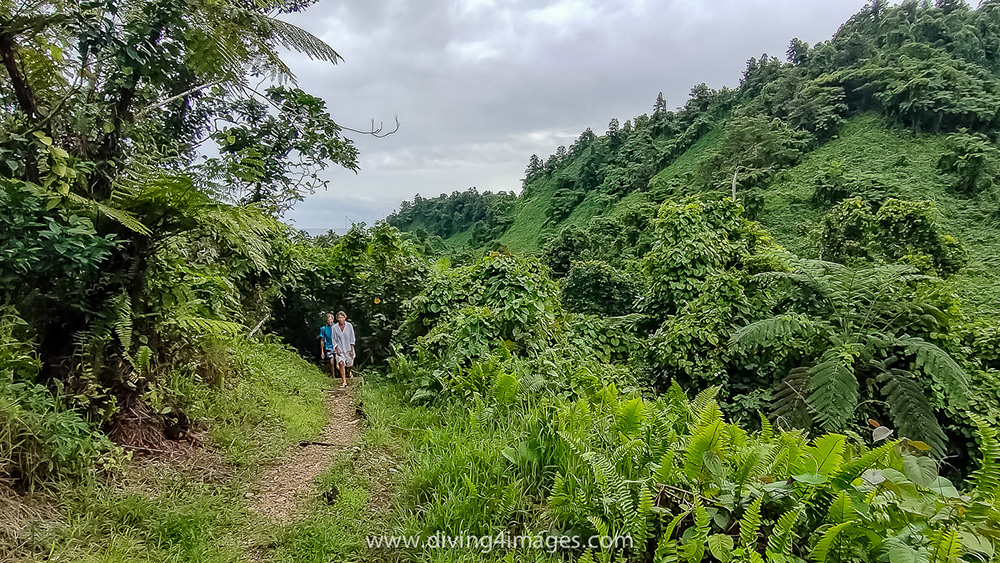 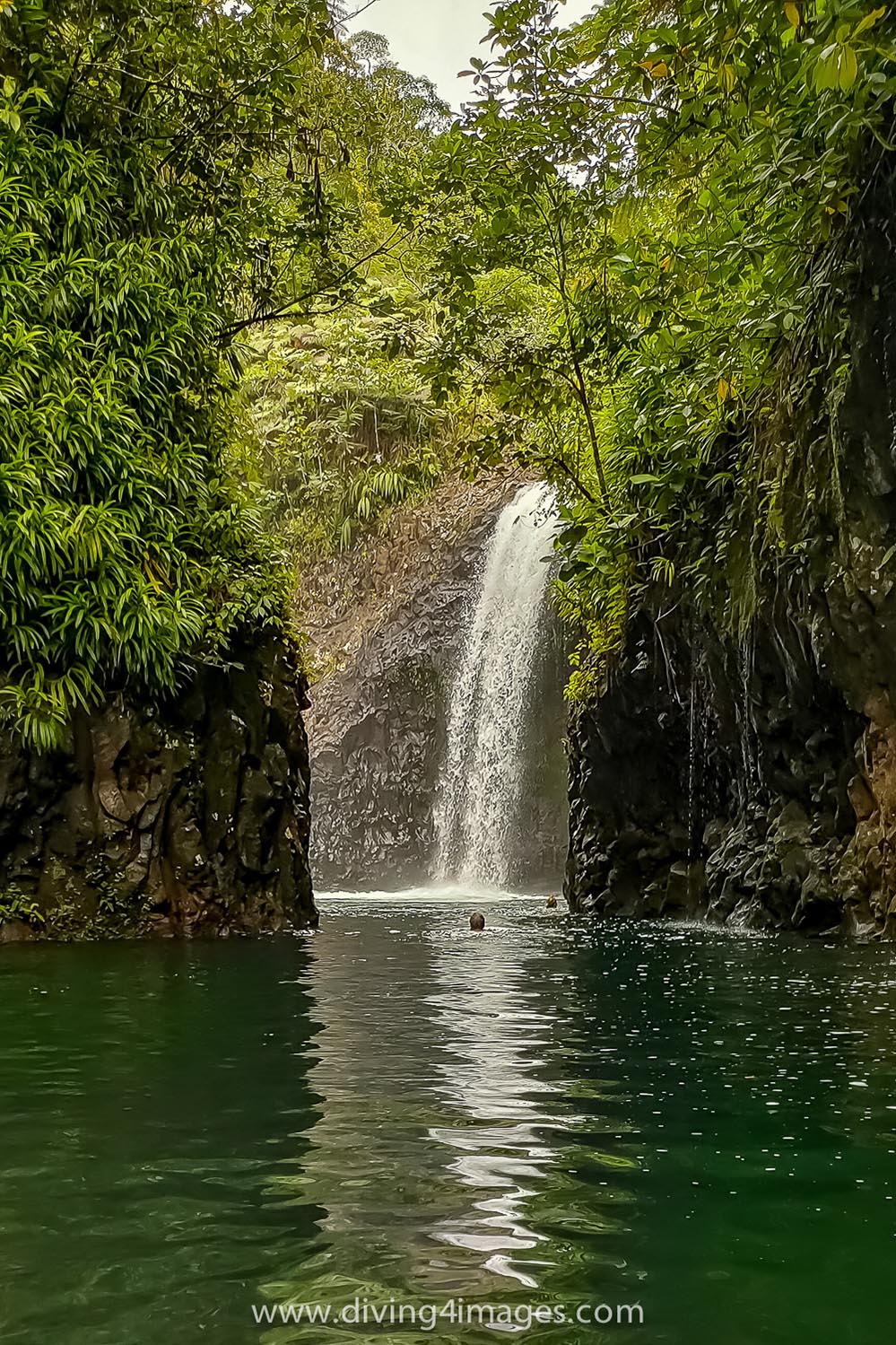 Photo by Graham Abbott: At the end of the walk, a gorgeous waterfall!

We cruised overnight back to Namena and started the day with a critter dive right against the island. We saw 4 species of Shrimpgobies (including a pair of Yellownose), Nudis and Slugs, Skeleton Shrimps, Twerking Shrimp and a new Flatworm we couldn’t really identify. Then we went to Schoolhouse, and it sure lived up to its name with schooling Barracudas, Triggerfish, Trevallies, Bannerfish and even an Octopus! We finished the day exploring Seven Sisters where Whiz found a Giant Moray Eel.

We made our way to Vuya and had an absolutely incredible Morning at Cat’s and Humann. The current was just enough to have all the soft corals out in full splendour and the fish all gathered at the top of the bommies. Our afternoon dive was at UndeNAI’Able Pinnacle and the fun started before the briefing, when a Sailfish skittered out of the water 5 or 6 times as we were getting ready, right next to NAI’A! The dive was fabulous and we saw Nudibranchs, a gazillion Fusiliers, passing Mackerels, dancing Anthias and more luscious corals.

After the 3rd dive it was finally time for our Costume Party, and for this group that is an Every Trip event, not just for Halloween. Bel went as the Ghost of Birthday’s past just to haunt Gary, who in turn dressed up as Erik the Vagina Face Fruit Bat… and with the towel coat that Theresa made for him… he flashed everybody!  We also had Pirates, Sweetlips, Disco Clam, Margaret, Butterflies, Mermaid, Jungle Jim and whatever Graham was. The crew joined in and dressed up with bits and bobs from the guests and we had an impromptu Kava Party! 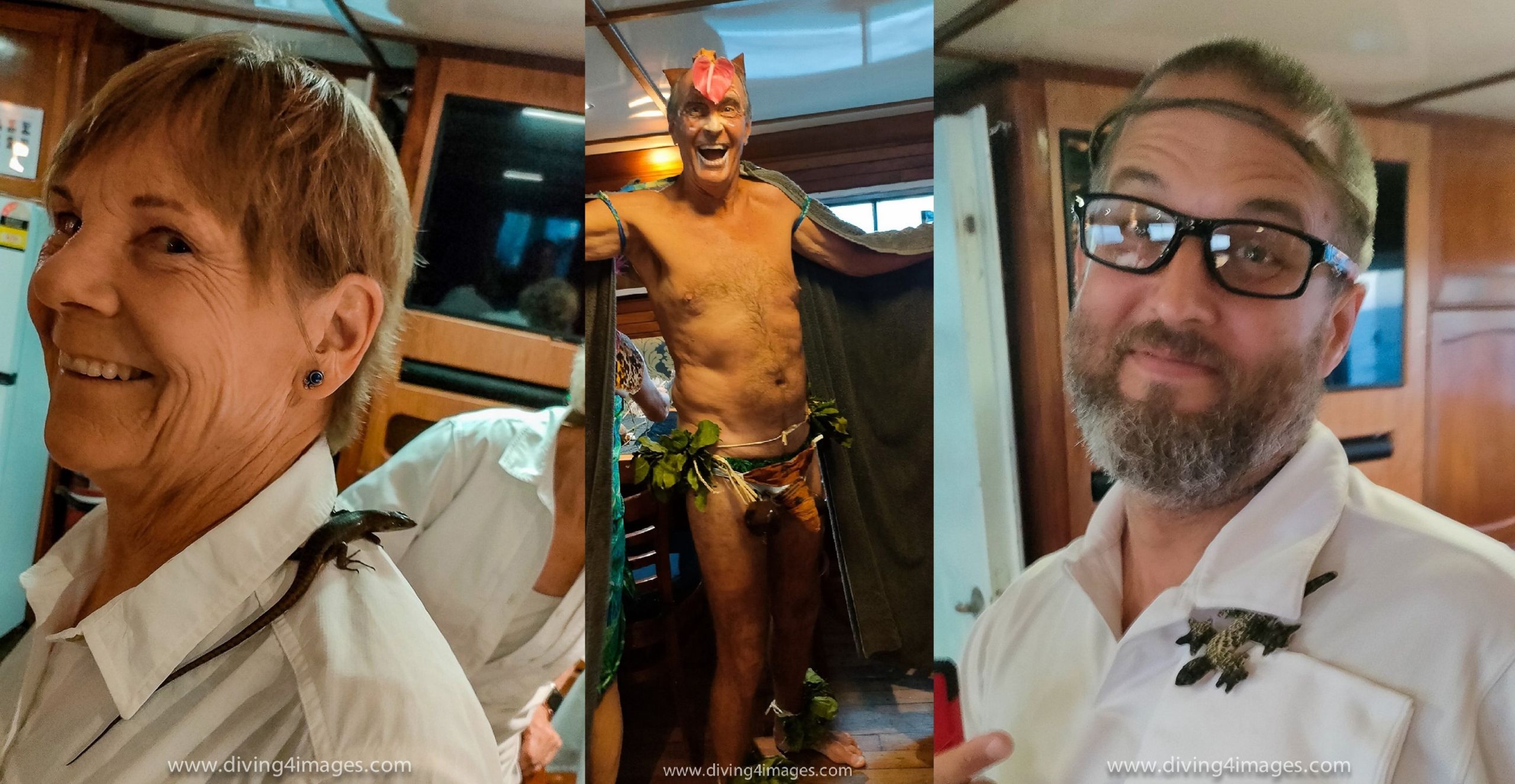 Photos by Graham Abbott: Erik the Fruit Bat wins costume night, but Mike's rendition of Margaret does not go unnoticed

Photo by Mike: The crew joins the costume fun!

The following morning we dived the ever mesmerizing Sea Mounts and once again the guests had nothing but bewilderment at such vibrant colors on these reefs. We saw a Turtle, Blue Dragons, Barracudas and all the small reef fish that make the reef come to life. Then at Mellow Yellow we saw the soft corals in full bloom as well as all the fish we could ask for on top of the bommie. To top it all up, we saw 6 Blue Dragons, a few Flabelinas, a Scorpionfish and huge Snappers.

The final day of diving was splendid, we got to dive some of the most iconic sites with very little current, yet in full abundance due to the Phytoplankton that we saw on the surface from the previous day. We saw schooling Blackfin Barracudas, Schooling Bannerfish, tons of Unicornfish, a million Fusiliers, a gazillion Anthias and a Brazilian Dive Guide… oh, wait! It was just fabulous, and the sun was shining without a whiff of wind around. It made for the perfect journey home. 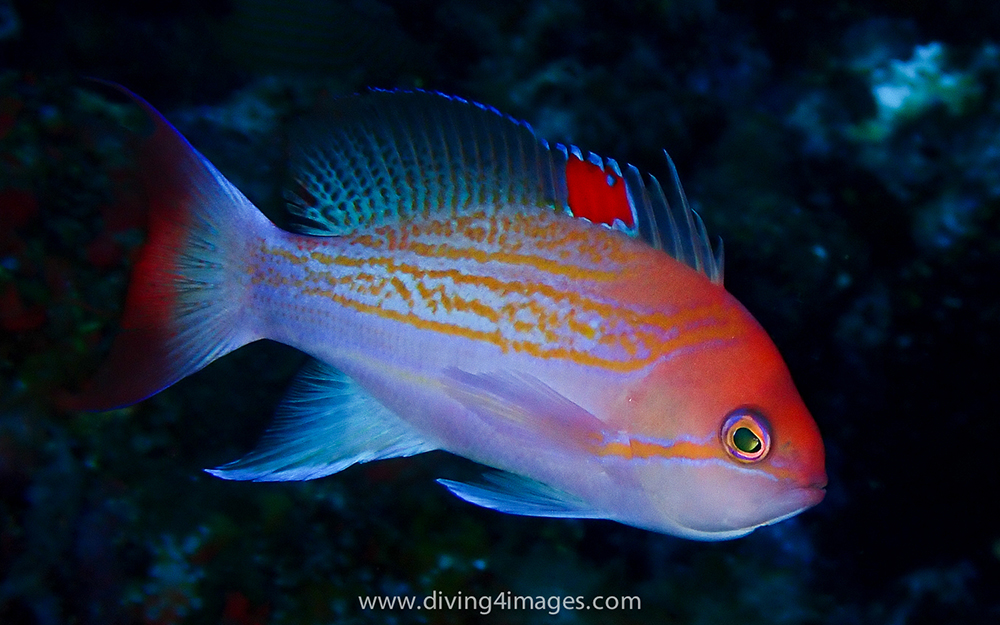 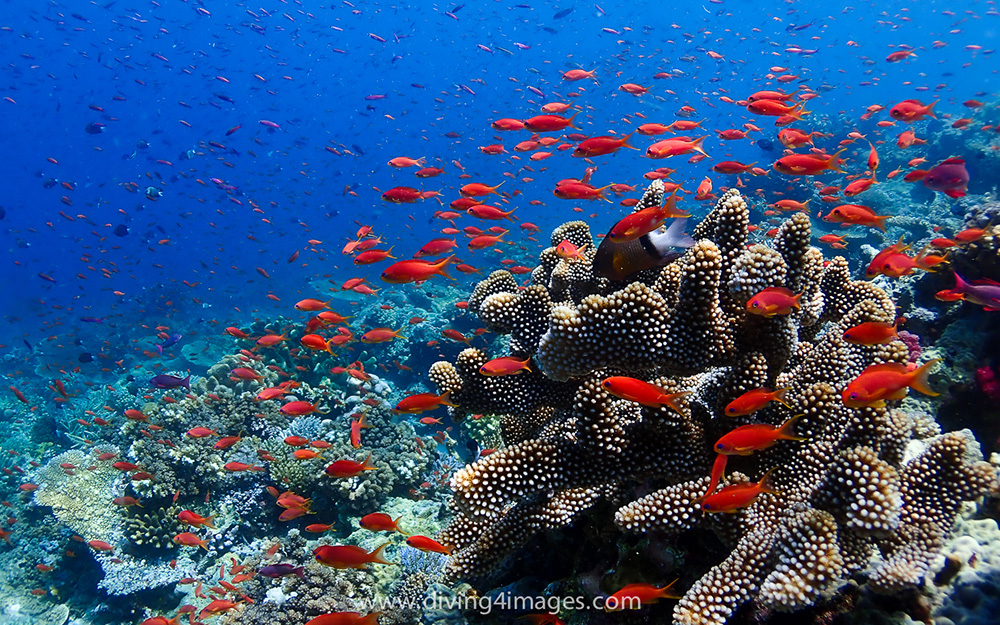 We had our best sunset of the trip with the whole gang hanging out on the sun deck and sharing the life stories that brought us all to this trip together. We saw the brightest of green flashes and headed down for dinner, after which we had a great slideshow from Graham recounting the best moments of this remarkable journey.

This trip was not out usual dive-dive-dive schedule, and the crew enjoyed taking the guests on land tours, showing them a part of Fiji most people don’t get to see. The extra time also made us closer to the guests, and Bel’s having a hard time imagining how boring it will be to get ready for diving without Chris to entertain her. It’s been an incredible journey with amazing people, and we can’t wait to do it again!