We here on NAI’A are used to having photography enthusiasts. That’s why we’ve created a separate room complete with shelves and banks of electrical sockets. So we were well prepared as our camera room was suddenly flooded with housings, ports and strobes when a batch of passionate photographers stepped aboard for a 10-day charter. Among them were Andy, Allison and Rudy, who actually make a living in underwater photography. No pressure guys, but we’re expecting the end of charter guest slideshow to be pretty amazing!

Their luck was in as the forecast for the next 10 days was clear and calm. As the sea is now starting to cool after a long, hot summer, we looked forward to recovering reefs. The first dive, the checkout dive at Samu Reef, did not bode well for the rest of the trip where the bad vis continued, probably due to the high water temperature. However, as soon as we curled north and east around the big island of Viti Levu, we found that the visibility had improved and many of the corals were already starting to recover from bleaching. Happy days!

Our first full day of diving brought us to the Vuya area, home of a variety of dive sites. Currents at these sometimes-unwieldy places were mellow – just strong enough to promote blooming soft corals, but not so strong we couldn’t swim against them in order to explore the whole reef. In additional to schooling plankton-feeding fish, we saw plenty of enticing macro life, such as the Indian cuthona, blue dragon and Kune’s chromodoris nudibranchs, sea spiders and adhesive anemone with its partner shrimp.

Night divers were lucky enough to catch a glimpse of a large marble ray and several pleurobranchs. That night was Cruise Director Joshua’s birthday, which he tried to keep hush, but fellow Cruise Director Amanda certainly wouldn’t allow that! He was treated to a song from the crew and a gooey chocolate cake. Hey, maybe birthdays aren’t so bad…

Overnight we cruised towards the spectacular Namena Marine Reserve to dive the colorful, lush pinnacles of South Save-a-Tack and the deep walls of North Save-a-Tack that attract schools of fish and sharks. Among the sightings on the south side later jotted down in logbooks were baby octopus at Tetons I and a blue ribbon eel and robust ghost pipefish at Tetons II. On the north side at Grand Central Station, we observed some spectacular pelagic creatures such as grey reef sharks and scalloped hammerheads prowling amidst great schools of horse eye jacks, fusiliers and redtooth triggerfish. Waiting for us at Kansas were some of the more bizarre macro life, including leaf scorpionfish, 7 pygmy seahorses and 2 mysterious ornate ghost pipefish together! Wow, Big Mo and Captain Johnathan really have eyes like hawks.

Because this was a 10-day charter, with 2 days in Namena, we got to visit one of our favorite dive sites, Schoolhouse, one of the most variable sites on our route. When the current is just right, as it was for us, you can catch big schools of snappers, barracuda, mackerels, bannerfish, jacks, triggerfish, and even a couple of scalloped hammerheads! This earned several clear shouts of “Oh! Nice!” from George, one of our more exuberant divers this trip. He could always be heard cracking jokes and laughing at meal times, but was also extremely vocal underwater where his comments were accompanied by a twinkling smile. We like appreciation! 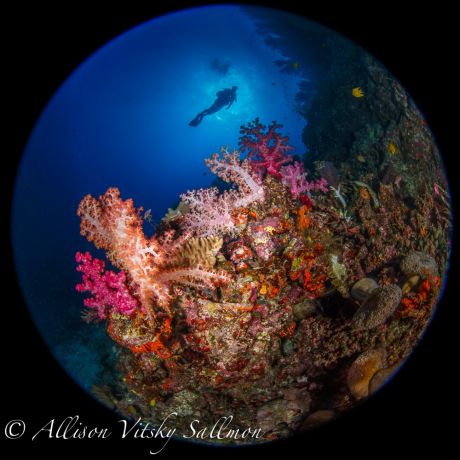 A whole new world - by Allison 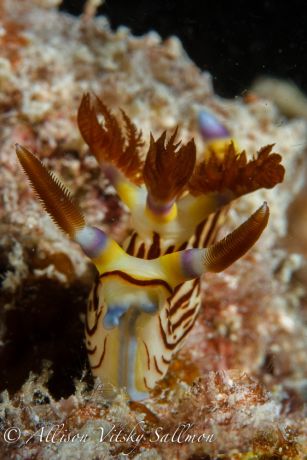 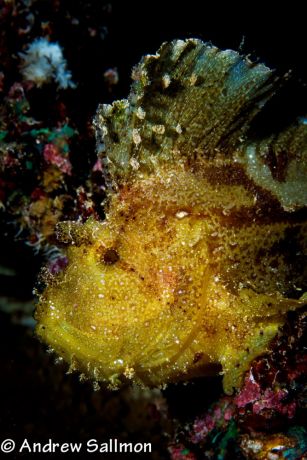 This IS my good side! - by Andy 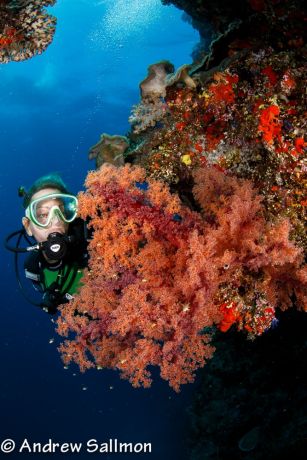 Checkin it out - by Andy 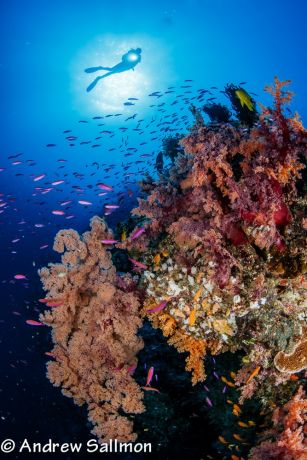 Top of the world - by Andy 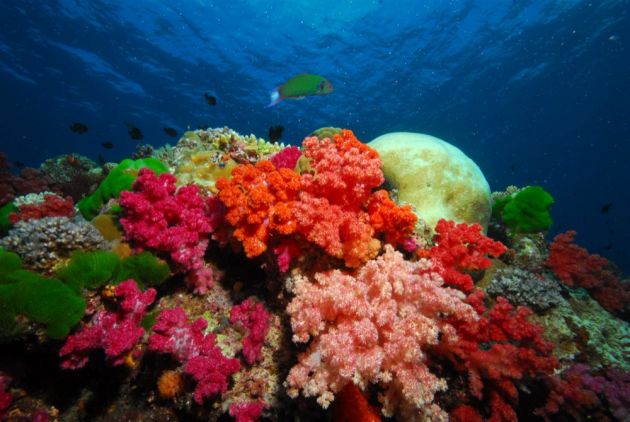 The whole spectrum - by Dick 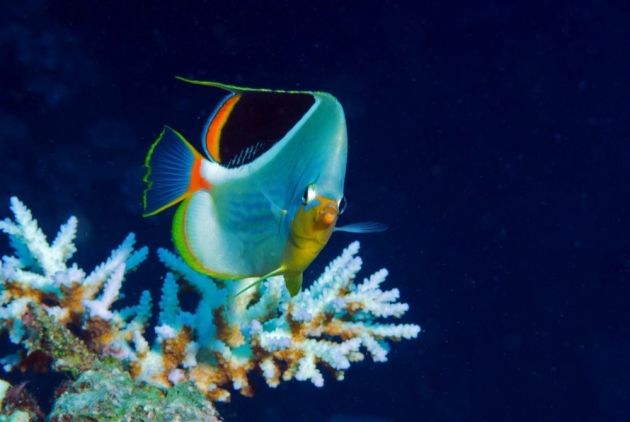 Ridin side saddle - by Dick 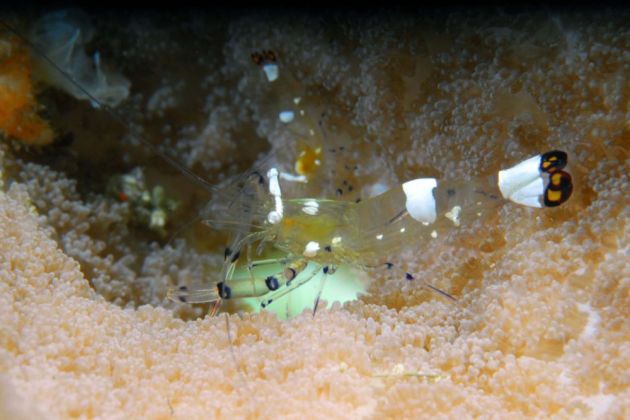 Walking on glass - by Dick 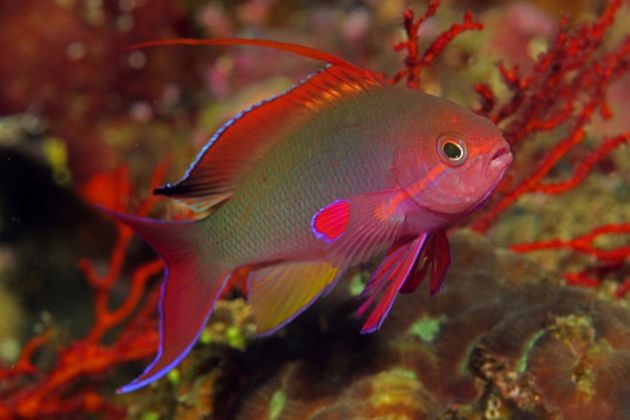 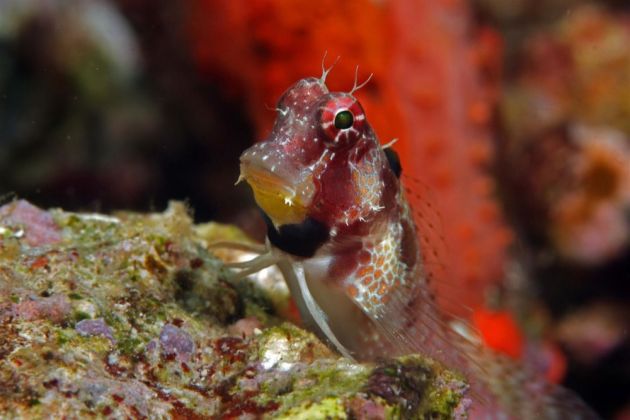 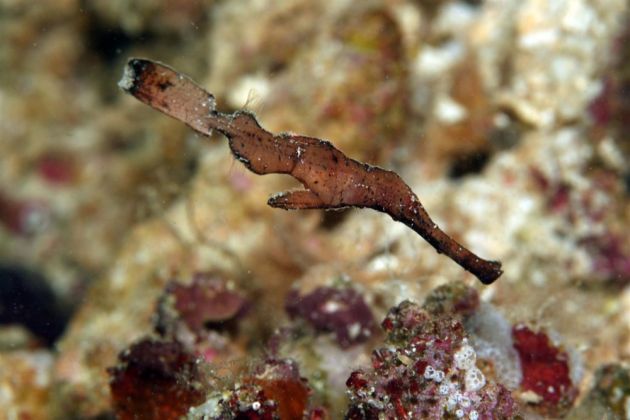 Blade of grass? - by Juli 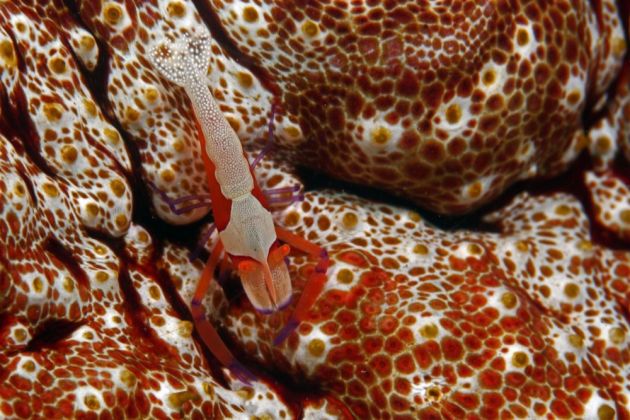 Emperor of my own tiny universe - by Juli 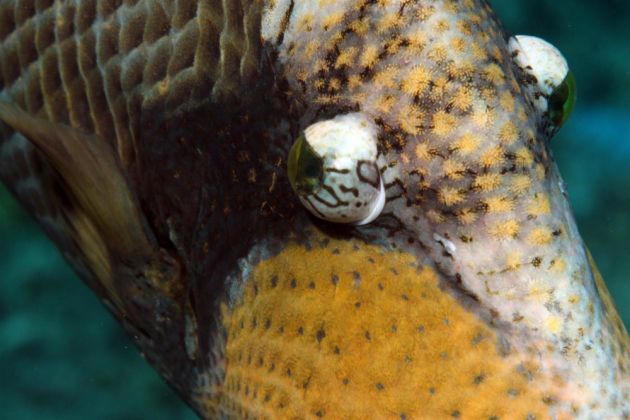 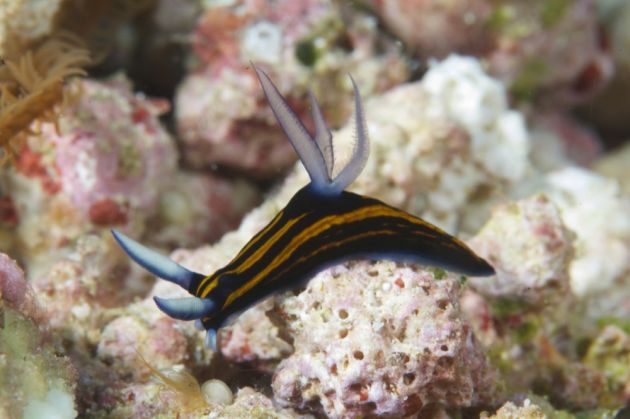 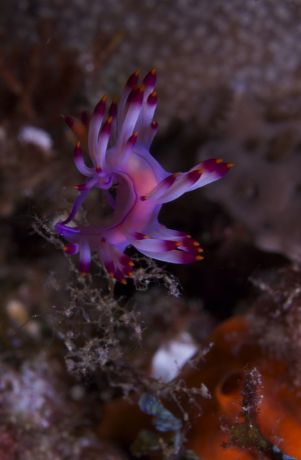 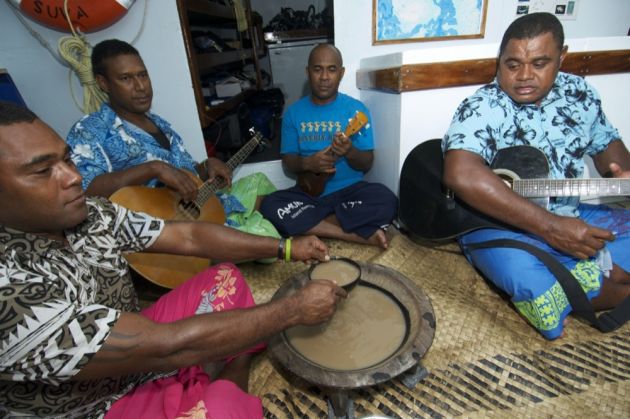 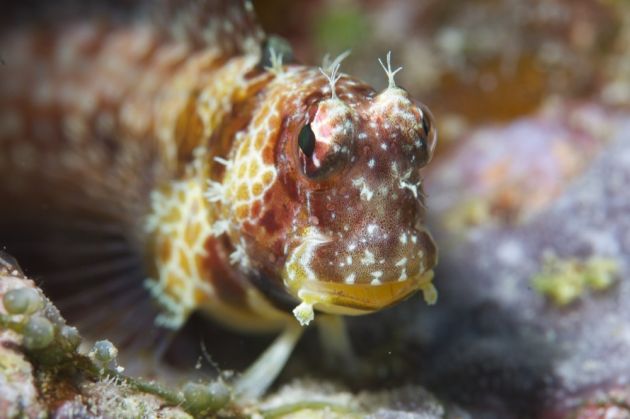 This is my happy face - by Rudy 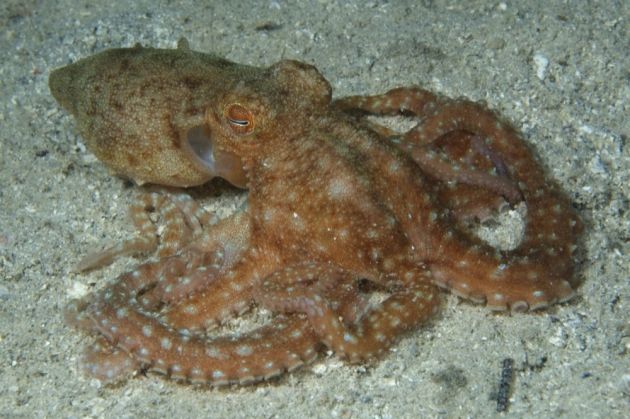 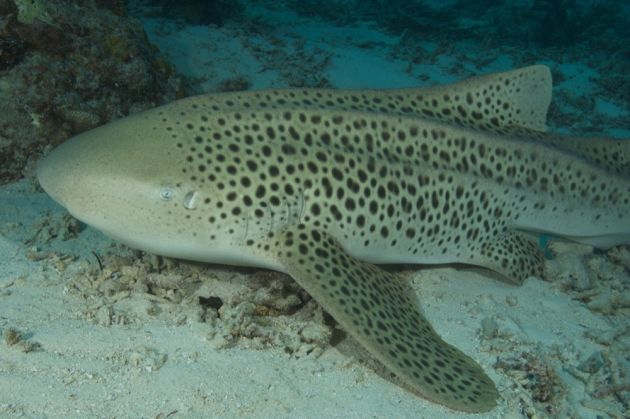 Why they call me zebra shark, I dunno - by Rudy 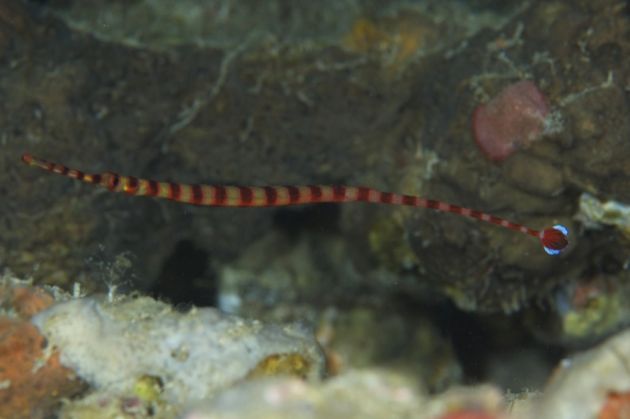 The rare and extremely shy NAI'A pipefish - by Rudy 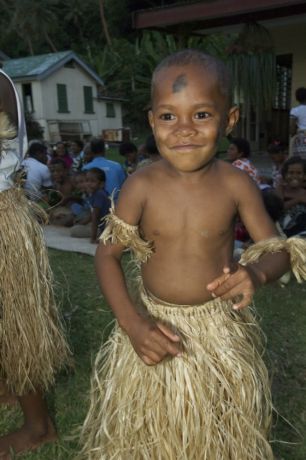 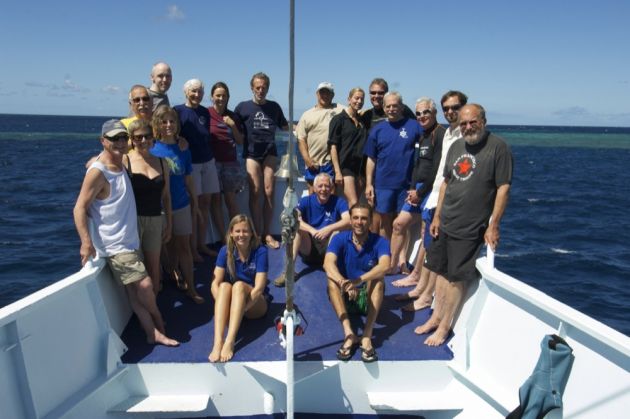 On day 5, we visited the village on the island of Makogai, but first we treated ourselves to three fun dives on the nearby reefs. Rick’s Rocks continues to distinguish itself among Makogai dive sites because it is there that we can reliably find shortnosed pipefish, slender ghost pipefish, blue dragon nudibranchs, leaf scorpionfish and white tip sharks. Becky’s Reef, for its part, yielded the shy critters hidden among the legs of crinoid stars, such as the crinoid clingfish (the only fish with a moving neck) and Baba’s crinoid squat lobster (great name!).

The village was as warm and welcoming as ever. Fili took our guests on an extended tour of the area, which included the atmospheric cemetery where victims of the former leper colony are buried. The villagers then regaled us by belting out songs while the village youth danced. As usual, guests and Cruise Directors alike were later mobbed by the exuberant children. Too bad we couldn’t take a couple with us… they are really cute!

Happily, this turned out to be a very sharky charter, starting with hammerheads at Schoolhouse, then again at Wakaya with 6 separate sightings! As members of the starboard skiff hovered in the blue, we experienced prolonged encounters with several scalloped hammerheads, some of which started circling and even angling their bodies, clearly looking up at us with one inquisitive eye at the end of that strange head stalk. On a later dive, those same guests saw a decent sized manta ray, green sea turtles and the obscure winged pipefish to complete an incredible day of Fiji diving!

And, while the next day at Nigali gave us very little current and therefore very few grey reef sharks, we saw our friend the leopard shark again who seems to have taken up residence and then were treated to 5 mantas at Jim’s Alley on the dusk dive. Not so bad at all!

After a day diving the famous and colorful sea mounts of E-6 and Mount Mutiny, we headed for our last destination of Vatu-i-Ra. Thanks to the full moon, currents were running at almost full throttle, giving us a series of “hold on and fly like a flag!” dives at Maytag, Gomo and Coral Corner. They all gave us spectacular shows of sharks, trevally and barracuda hunting amongst 1000s of fusiliers, with clouds of anthias valiantly struggling to maintain their place along the reef crest. Coral Corner, a place that consistently delivers a small handful of sharks, this time revealed 14 greys and 3 white tips. Hey, that’s more than at Nigali! The next day, although the current had diminished somewhat, we still saw many sharks and even a large spotted eagle ray (rare in Fiji) cruise directly over our heads and dart in among our group of divers. To complete an amazing week of diving, Captain Johnathan showed our guests the rare and shy NAI’A pipefish and a green leaf scorpionfish and fed the lightning-fast golden mantis shrimp on Mellow Yellow.

As forecast, the weather held for the whole 10 days and we sailed home to a wonderful sunset. Photography tips were exchanged, friendships were formed and pledges to return to Fiji’s colorful reef were promised.