Rowdy bull runs (and guests!), hyperactive breaching babies, whale song so loud you could FEEL the vibrations, and a very domineering escort throwing its weight around: this trip with Secret Sea Visions was one to remember! 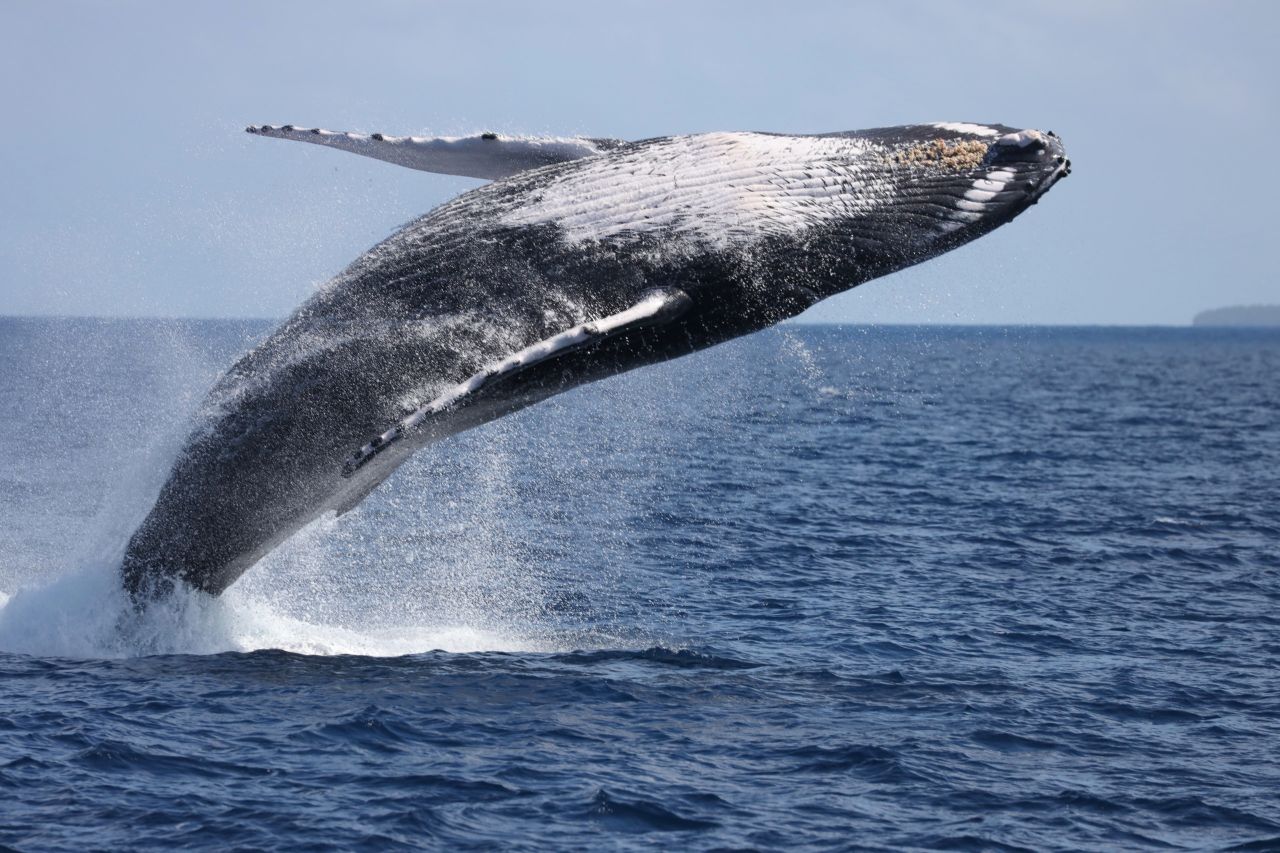 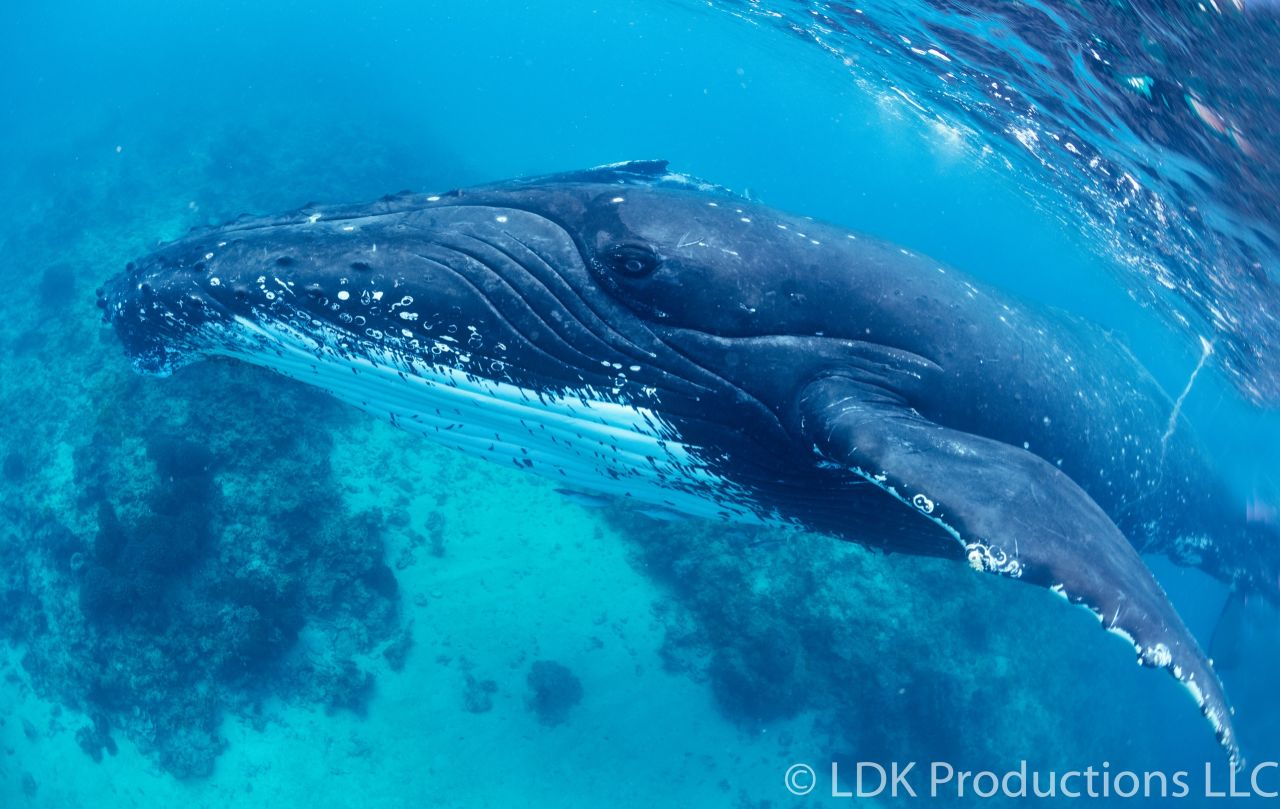 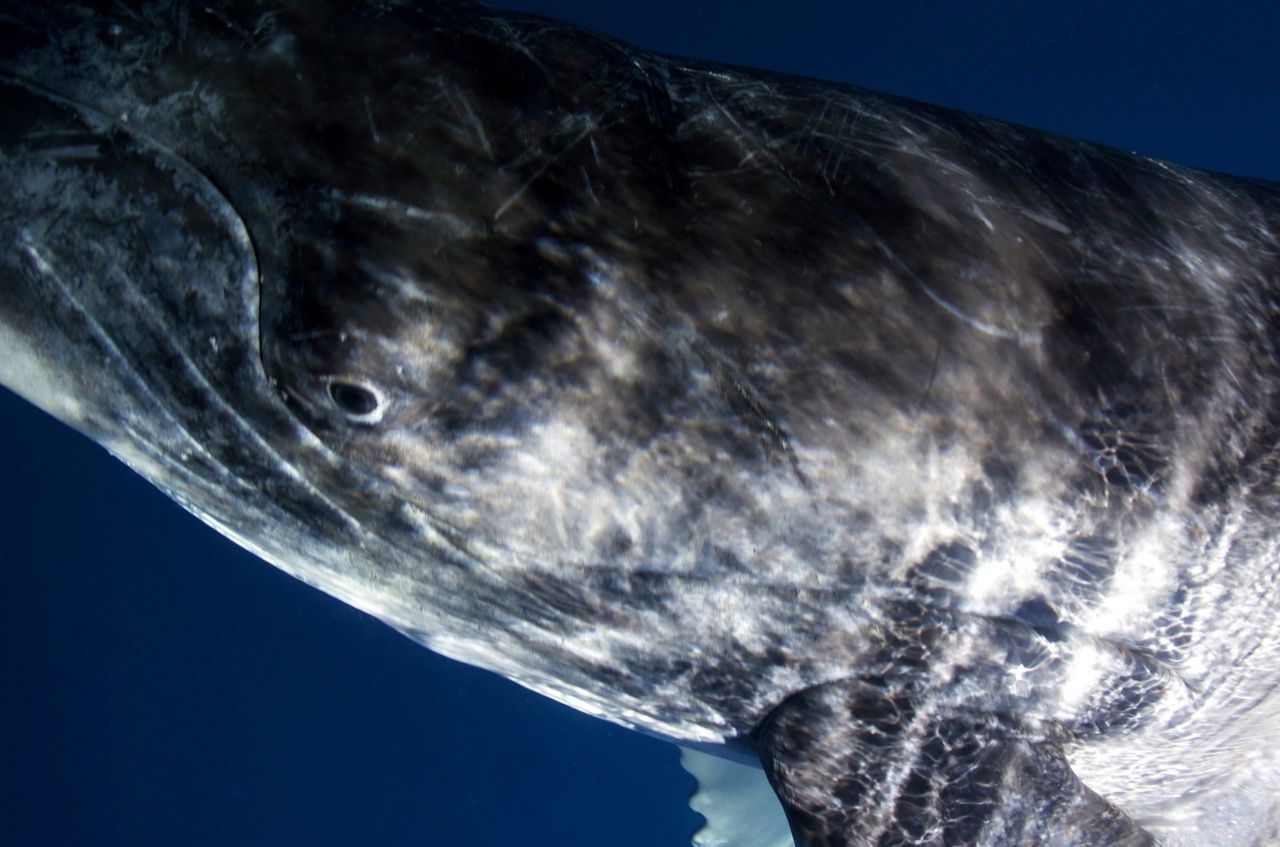 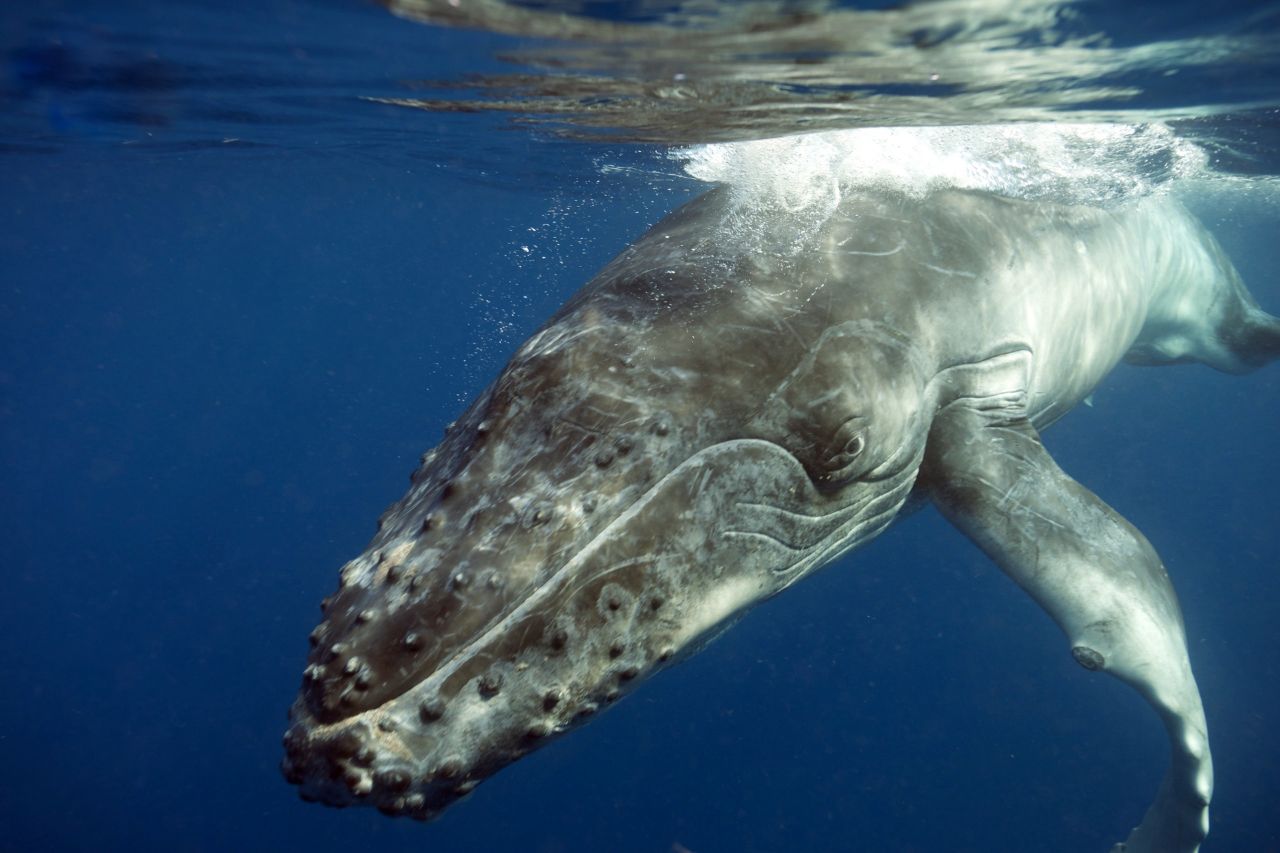 We were over the moon to welcome back Burt Jones and his wonderful guests from Secret Sea Visions. We first met Burt on our VERY first trip with NAI’A almost three years ago. And now we are coming close to the end of our time onboard, it feels fitting that we have come full circle. And boy, did we have fun with this gang! It was laugh-a-minute from the get-go and ‘raucous’ doesn’t even begin to describe the general vibe onboard. Picture daily cocktail hour with mermaid accoutrements and whale-tail head gear and you begin to get the idea! 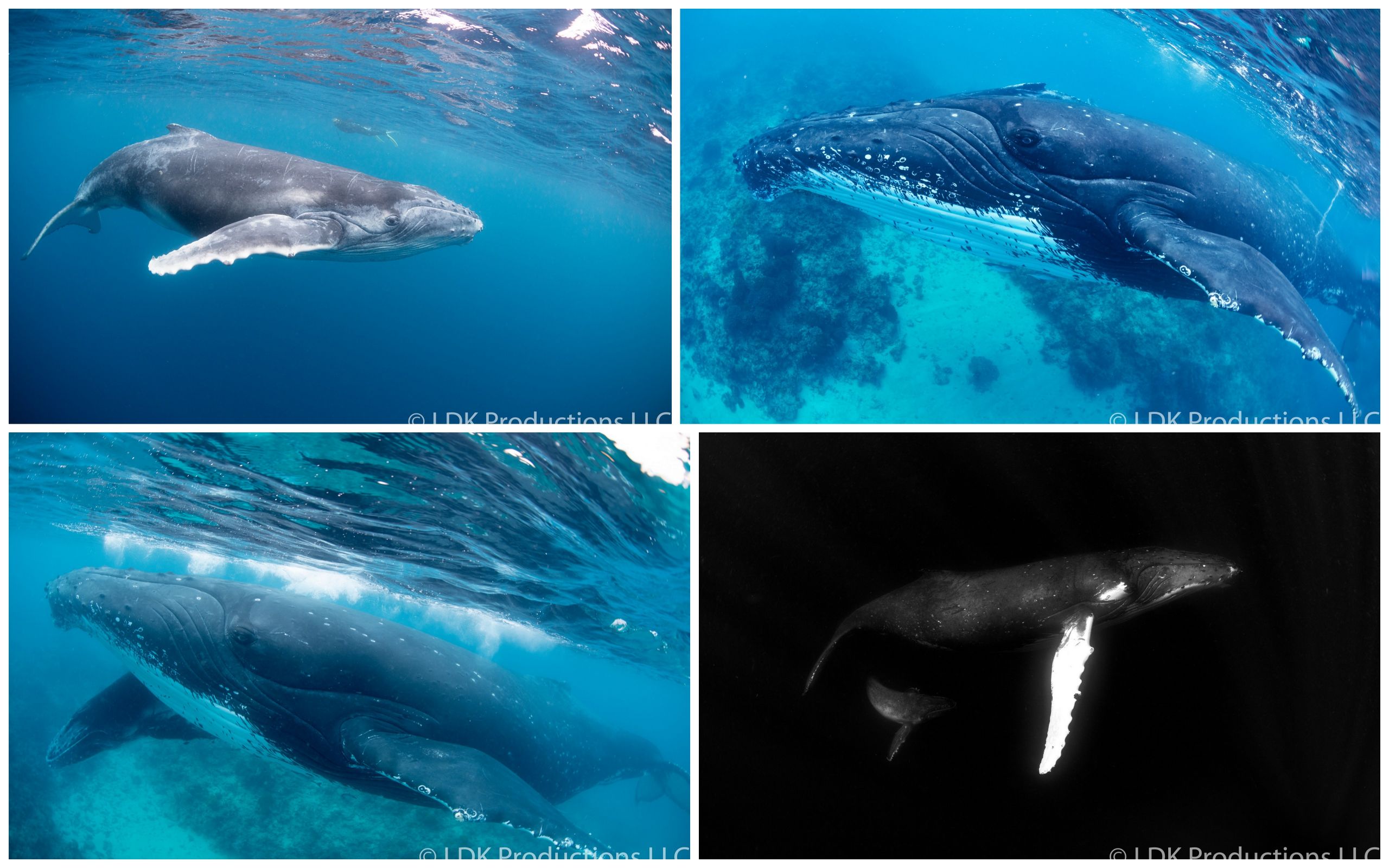 This charter got off with a bang: the very first morning we hauled anchor, got underway and were surrounded by whales within minutes! Our guests couldn’t believe just how many blows we were seeing in all directions. We started off enjoying the surface action – breaches, pec slaps and peduncle throws a-plenty – but by afternoon were keen to get out on the skiffs to enjoy the action more up close. We had no luck getting in-water with the humpies – they were way too busy and ‘on the move’ for us mere mortals to be able to keep up – but we did get spectacular views of multiple enormous breaches!

The next day we were delighted to get all our guests in water for the first time. We had the two extremes of encounters: the calm AND the crazy! First up, we came across a beautiful duo, who we suspect were a male and a female in the early stages of a courting ritual. They were hanging peacefully next to each other in the water column, seemingly resting, but every once in a while, would ‘wake up’ and begin circling and gently rubbing up against each other, very tactile and loving. Just beautiful to witness and quite the first encounter! We then found another on the skiff but couldn’t quite find it below the surface: presumably it was diving too deep for us to see. However, we COULD hear it singing! So loudly in fact, we could even feel it vibrating through our chests on the surface. After a while we moved on and soon came across a pod of ‘rowdies’: five or six huge individuals chasing each other at high speed. They weren’t yet fighting (though we suspect it came not long after!) so we deemed it safe to get in the water to watch them whizz by. It made for super-fast, high-adrenaline encounters and was a really exciting encounter! 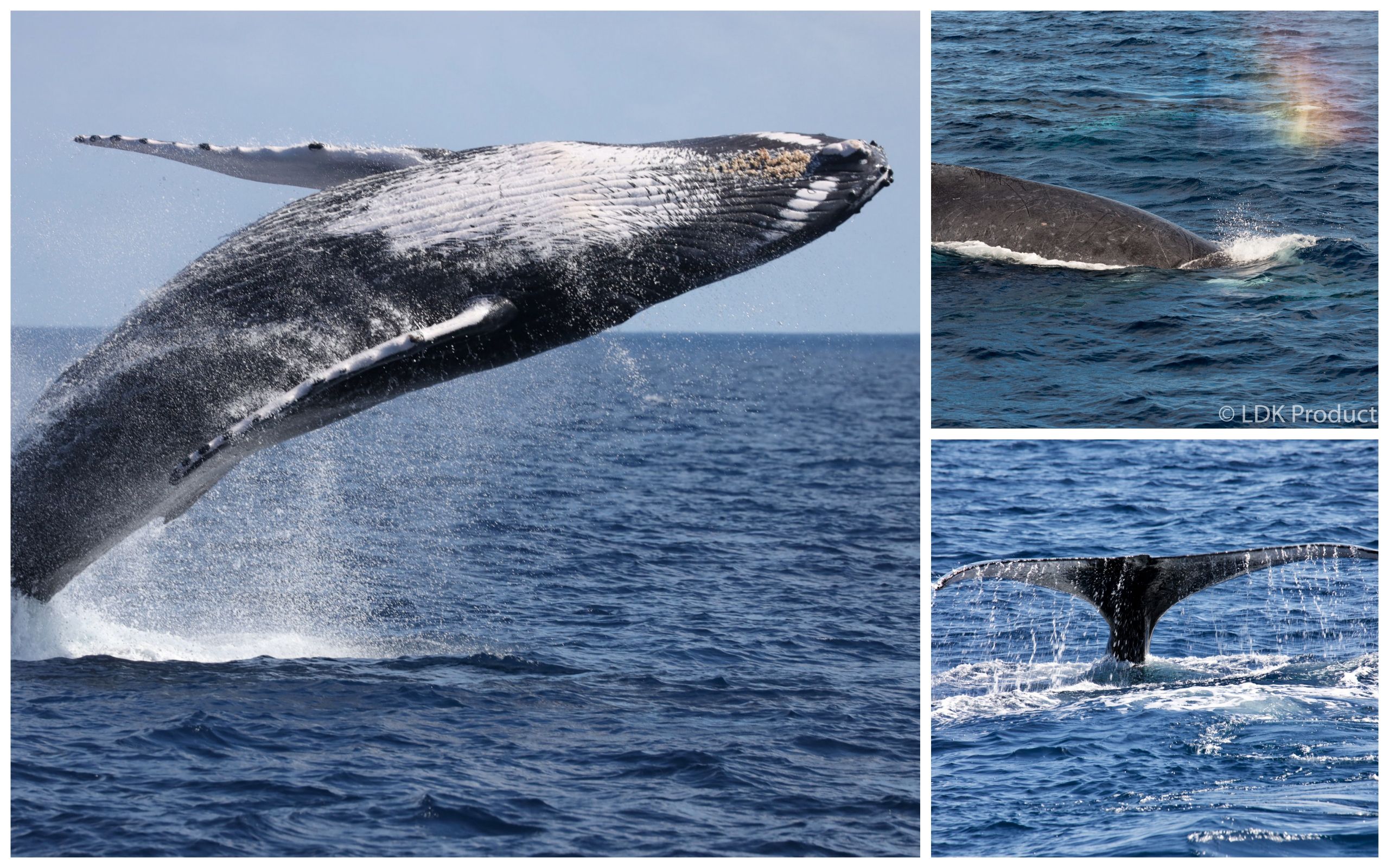 Our next in-water encounter was pretty special, too. From the big boat, we saw some big blows and splashes so began to approach. As we got to our 300m limit we realized there was a teeny tiny blow, too: our first baby of the trip! The situation was very interesting: we had a mom and calf being pursued by two large adults, who were essentially fighting it out to gain the role of ‘escort’/protector. We followed for maybe 20 minutes as they battled it out, smashing into each other and asserting their physical prowess. Eventually, one gave up and swam off, leaving us with the perfect trio: mom, calf and escort. We jumped on this opportunity and got in the water. We had the most PERFECT encounter. Escort hung deep and barely within our sight, just lurking in the background and making itself known once in a while as a reminder that we better not mess with momma! Meanwhile, mom was completely relaxed and baby was super-playful! We tell our guests in the initial briefing that baby WILL come right at you, don’t imagine he’s going to back off: YOU need to. But you’ve really got to see it to believe it and many of our guests learned the ‘hard’ (fun!) way! 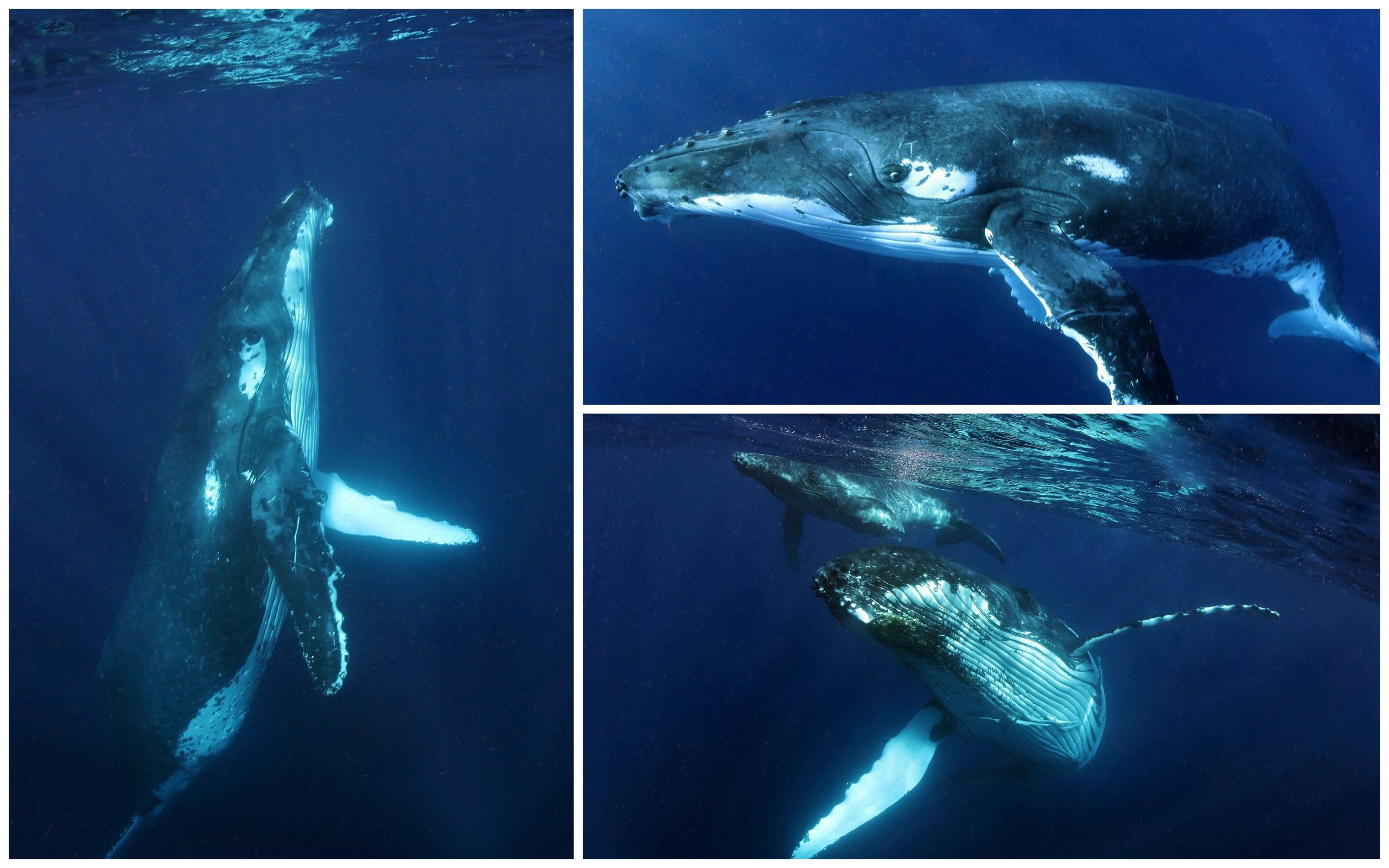 The following day we were treated to more gorgeous mom and calf encounters! First up, we met a hyperactive young’un who now goes by the name of Poppy: this one breached for a full hour non-stop, delighting our guests who were watching from the skiff. Then we came across a really young juvenile (still pale grey and kind of floppy!) and his white-winged momma: these two were really peaceful and we enjoyed a very calm interaction with them to make up for the excitement of Poppy. We ended a perfect day with a ‘beach walk’ (code for our guests venturing off the boat to invade the nearest beach bar which we may or may not now be barred from….).

These phenomenal experiences were followed by a couple of slower days – trying very hard to get in the water but feeling like we were being mocked by the whales as they constantly disappeared on us! – but that’s the nature of the beast: highs with the lows. In the meantime, our guests kept themselves amused with early cocktail hours and rowdy kava parties! 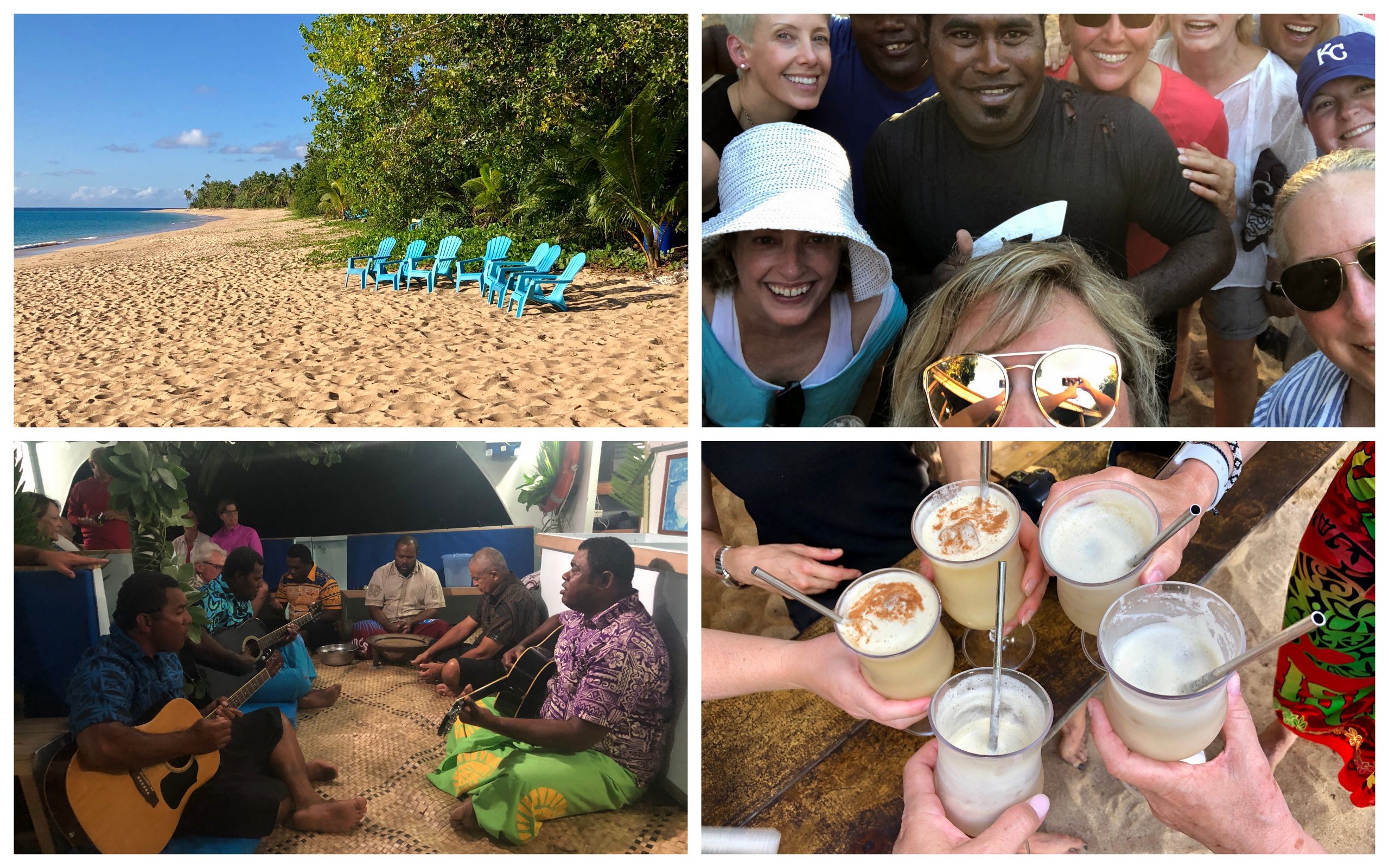 However, we were soon back on track! We had an incredible encounter with a mom, calf and escort trio. It was a really interesting morning, seeing how their behavior evolved. When we first got in the water we actually didn’t know there was an escort present; that is, until he made himself known loud and clear, coming up from the deep like a submarine and whizzing by us! Won’t lie, it made us jump! Then, while we were still on the surface, perhaps 150 feet away, he started throwing his weight around, essentially doing a headstand whilst repeatedly slamming his tail up and down on the surface. Then the CUTEST thing: baby started doing the same! Back on the skiff, we followed them for maybe half an hour and baby didn’t stop for a minute. The whole time, escort lurked below, and would, every once in a while, come up and blow right by the skiff to remind us we were still being watched. (S)he was very protective of mom and calf and we thought our in-water time was over. So, we were very surprised – and delighted – when, after a while, (s)he completely chilled out and the trio came to a relaxed stand still. We then spend a dreamy hour just hanging with them all, watching their magical interactions. 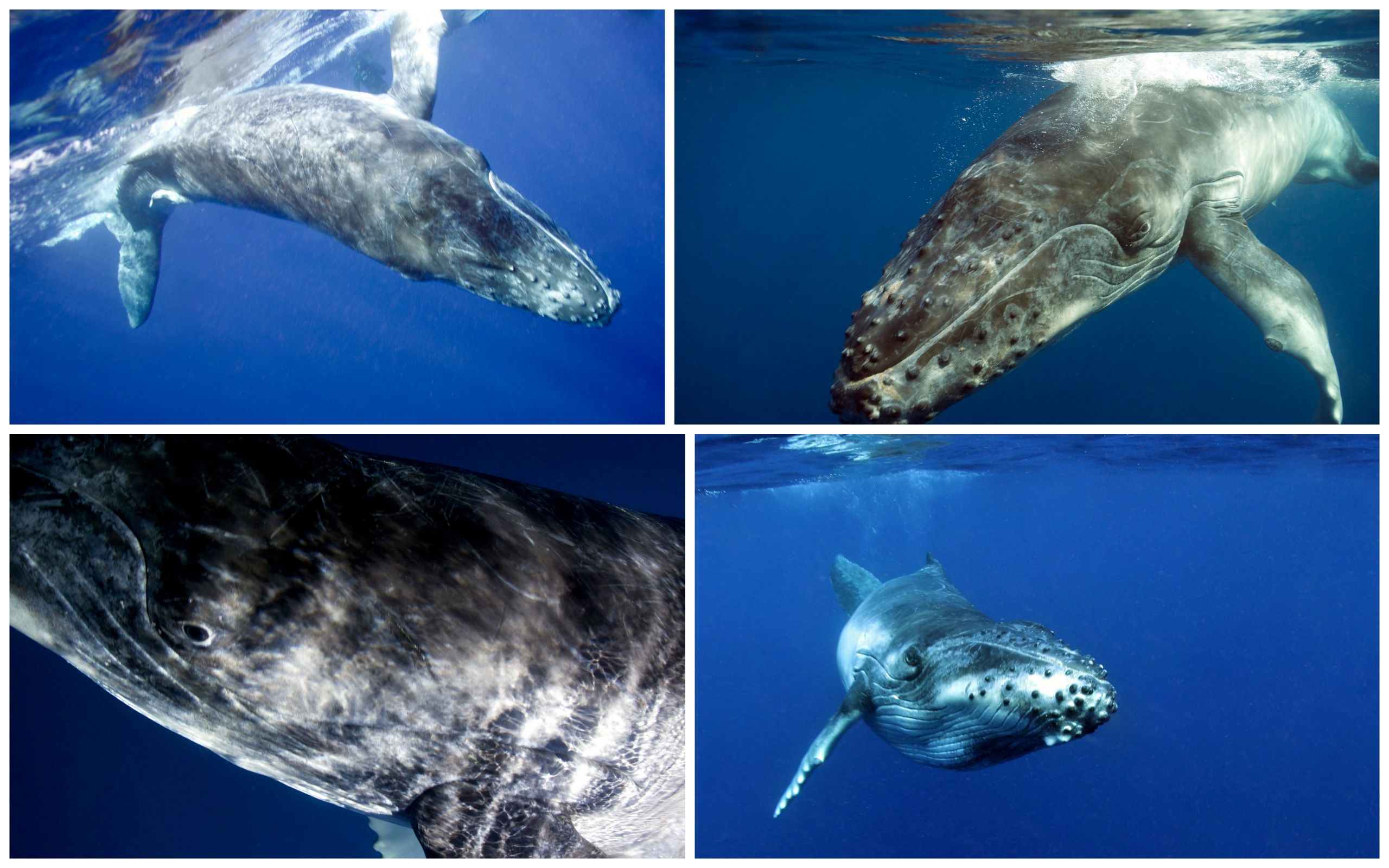 It was not just the time we spent in the water with the whales that was so enjoyable on this trip. One of the things that made this charter SO special was the fact that all our guests had so much FUN together, no matter what was going on. Hanging out on the top deck cruising around looking for whales, sharing a cocktail over dinner, or enjoying impromptu dance parties…. These folks were ALWAYS laughing!

We have had such a wonderful time sharing this trip with you all. THANK YOU to Burt and your incredible friends. We will truly miss you and hope to see you all again in the future! 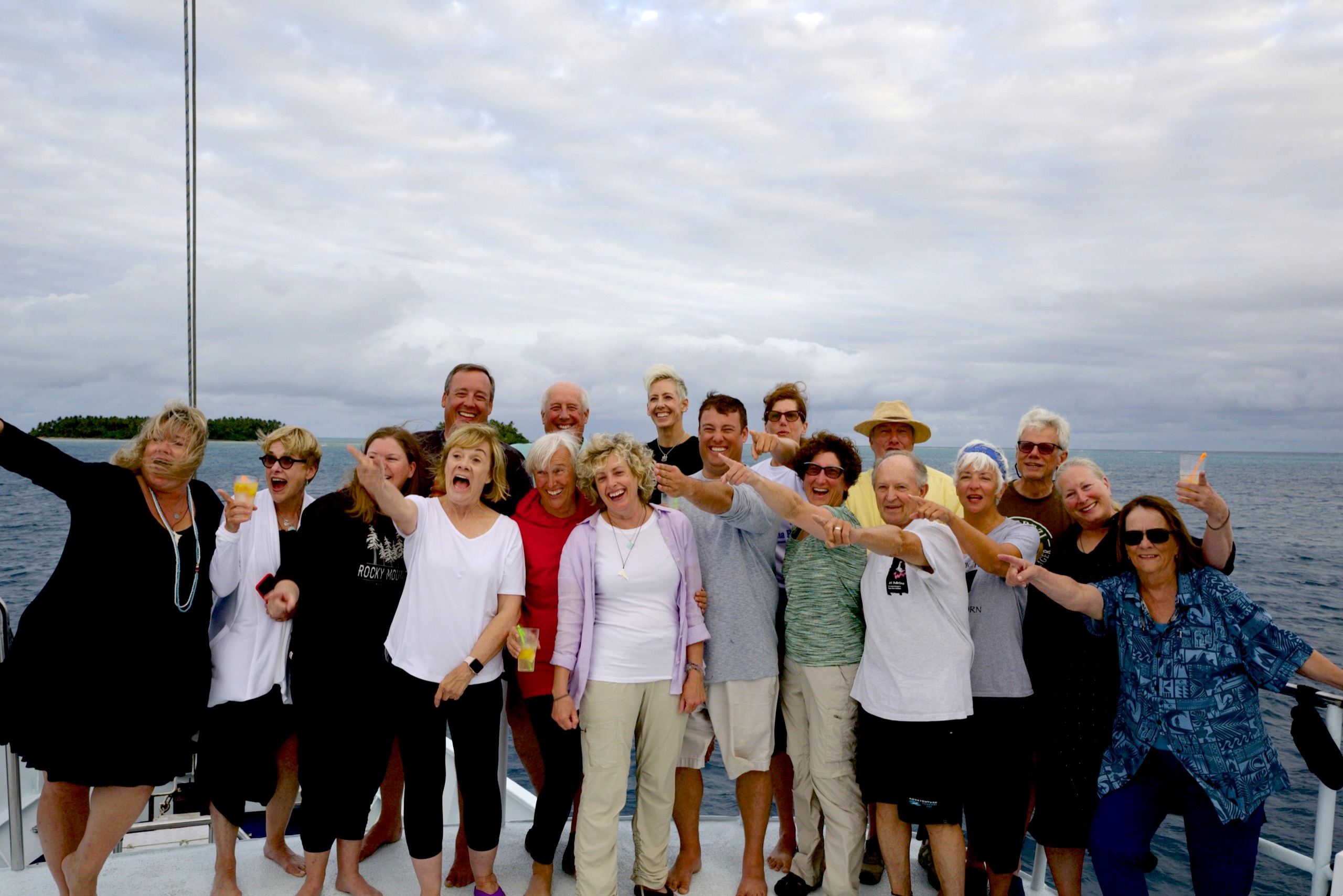