For the regular readers of the Divemaster Diaries, you may know that this is a time of change for Nai'a. After three wonderful years, the sad day finally came last Tuesday to bid farewell (for now!) to two fantastic Cruise Directors, Amanda and Joshua. We wish you all the best in the coming months: may they be full of adventures and may you find your 'land legs' again before too long. So long and thanks for all the fish!

So let me now introduce ourselves, Vanessa and Chad: we are honored and very VERY excited to join the Nai'a team and to continue Amanda and Joshua's hard work as the new Cruise Directors.

And so our story begins....

After 6 long hours apart, we were delighted to have the dynamic duo Burt and Hergen rejoin us for their second back-to-back charter: with them they brought 16 avid divers, including many photographers keen to pick up some tips and tricks. Dave R and Lynn had been with us on the last charter and soon settled right back in. We then welcomed Pam, Carrie, Mike, Jim, Janice, Paul, Rick and Eileen; a fun-loving, full of laughter family/friend group from various cities across the US (none of which they cared to meet up in, hence the Fiji trip!). In addition, we welcomed Jon, Orie, Vince, Cameron, Phil and Dave T; many of whom had actually crossed paths on other liveaboard trips in recent years (if anyone knows the '6 degrees of separation' theory, I swear it's just 2 or 3 degrees for divers!). Our final guest, and one we were excited to meet, was in fact the founding father and owner of Nai'a, Rob Barrel. As you can imagine, after 20+ years of Nai'a he had more than a couple of adventures (and misadventures!) to recount during our week at sea!

Things got off to a slightly concerning start when Hergen went rummaging in his dive gear and emerged with a badly sliced finger: there was more than a little blood and a very clear need for stitches. Enter surgeon Lynn! A quick search through the extensive Nai'a first aid kit and half an hour later, she'd fixed him up and Hergen was all good to go.....albeit it with a big bandaged middle finger which he enjoyed waving at everyone around him!

Fortunately the incident was not a bad omen for things to come: the week got better and better and we've had some incredible diving along with many stories and much laughter in the salon.

As always, we started our trip with a check-out dive at Samu Reef. Big Mo and Vanessa found lots of great little critters for our guests to enjoy: popcorn shrimp, jawfish and a lovely transparent bubble coral shrimp to test everyone's eyes. Jon got an audible 'awwwwwww' from Vanessa when he pointed out a juvenile many spotted sweetlips wiggling away in a head of digitate hard coral. But the highlight had to be two mating octopus putting on quite a show: it kept Cameron and Phil entertained for at least ten minutes! Post dive, we all enjoyed an excellent dinner prepared by the awesome crew in the galley then hit the sack for an early night in preparation for 6 full days of diving coming up.

Day 1 saw some adaptations to the itinerary due to an unexpected Yogurt Crisis. We realized the night before that the delivery guy with the specifically-guest-requested natural unsweetened yogurt had not made it to the boat before departure (how DAIRY be late?!) so we made a slight diversion to Nananu-I-Ra Reef for our first dive. Determined never to disappoint a guest, we sent one skiff in to shore while all the divers were out: he returned with buckets of yogurt just in time for breakfast! Pinnacles and Labyrinth proved to be really enjoyable dive sites, with all divers enjoying MORE octopus activity and Chad's group identifying a Blue Dragon nudibranch. We moved on to Vatu I Ra for the rest of the day, diving Maytag, Coral Corner and Mellow Yellow. Whilst there was no sign of the elusive Nai'a pipefish (even the infinitely patient Burt gave up after 30 mins of staring into a crevice!), it was RAINING fusiliers and anthias along the coral crests, making for some great wide angle photography.

After a smooth crossing to Namena, our second day began with a great dive on Schoolhouse. Big Mo's group spotted some of the trickier critters - a pipefish and a leaf scorpionfish - and Chad's couldn't miss the Pickhandle Barracudas as they cruised on by. Rick and Eileen, who had separated from the group and found refuge from the challenging current, were rewarded with a private showing of grey reef sharks! For the following two dives we explored Two Thumbs Up: a few of the divers got a gentle manicure from some helpful white banded cleaner shrimps, Burt and Dave patiently spent time in the sand getting portraits of the attractive yellow-nose shrimpgoby and Lynn got some lovely wide angle shots of the vivid soft corals. We ended the day with a 'crepuscular kick-off', crepuscular being the fancy term for a dusk dive. After flying along Grand Central Station led by Rob, we found ourselves in Kansas just in time for the exciting transition from day to night. Vanessa, Cameron and Phil snuck out to the edge of the channel facing into the pumping current, found a rock each and hung on like hell! They then enjoyed the show kicking off in front of them for twenty minutes: a circling grey reef shark, streams of fusiliers and masses of hunting bluefin trevafllies. Retreating to the shelter of the pinnacle they ended the dive with the laziest decorator crab ever. This guy was huge, a good 12 inches across, but instead of selecting a beautiful array of corals/sponges/anemones etc to decorate his shell he'd gone for the easy option: a single piece of soft coral bigger than he was just plonked on his back! That evening after dinner saw an impromptu Kava party: it doesn't take much to encourage the Nai'a crew to pull out their guitars and sing.

After a peaceful Kava-induced sleep, our third day brought us to the Somosomo Strait in Taveuni. Big Mo's group knew it was going to be a good dive on Fish Factory when they back-rolled in and descended face to face with a blue-banded sea snake, which then stuck with them and posed perfectly for many a good photo. The pretty damsel fish, however, were not so well behaved and Orie now has a whole folder dedicated to their butts! Knowing she was super-keen to see one, Vanessa was very happy to show Cameron an adhesive anemone (or 'pizza' due to the stuffed-crust-like edging) and its resident peacock shrimp. They then stuck together and soon came across a trumpet fish hiding behind another larger fish: a hunting technique they'd been discussing in the previous day's environmental presentation. The next dive Pam too put her Scuba School knowledge to use: using techniques learnt during the Cryptic Critters presentation to identify and enjoy a beautiful lavender scorpionfish and (nearly) perfectly camouflaged Morrison's Dragonet. Mike in the meantime was lucky enough to see a free-swimming colorful flatworm, showing off for his camera. The third dive of the day at Freeway saw some starkly contrasting creatures: while everyone else made the most of the rubbly bottom and stuck their heads in the reef finding shrimps, crabs, nudibranchs and worms, Hergen went to the other extreme and enjoyed a private moment with a Manta Ray! 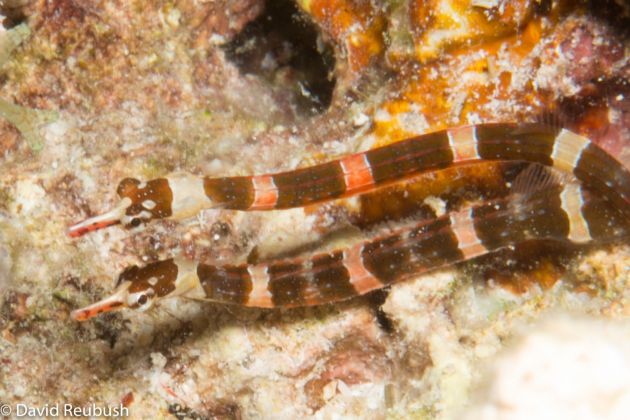 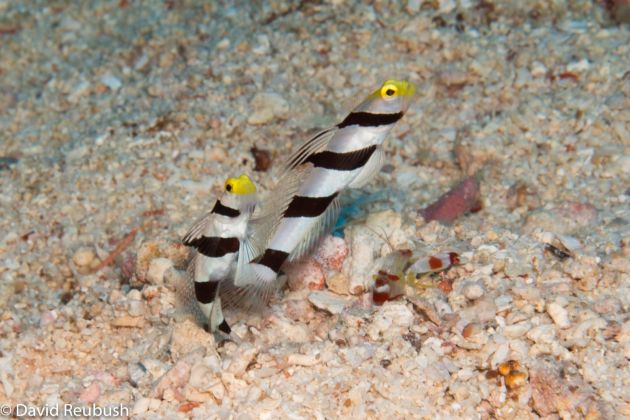 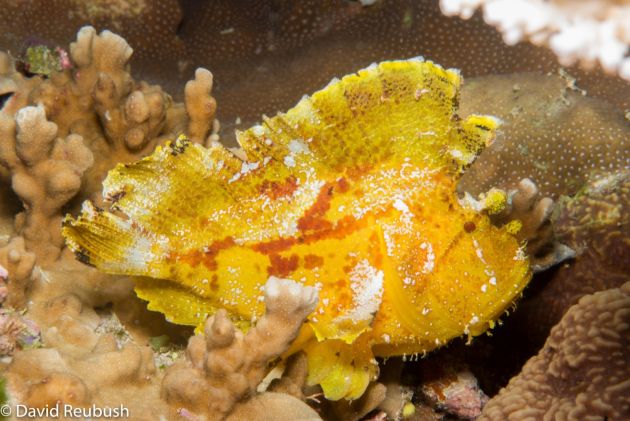 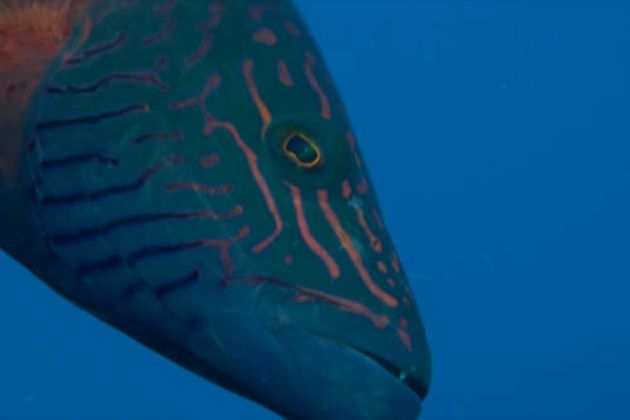 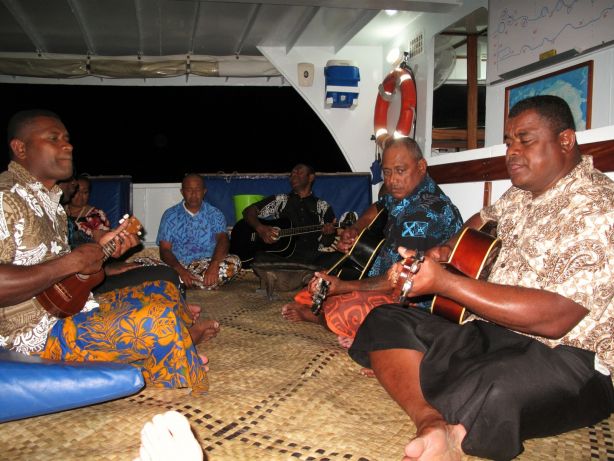 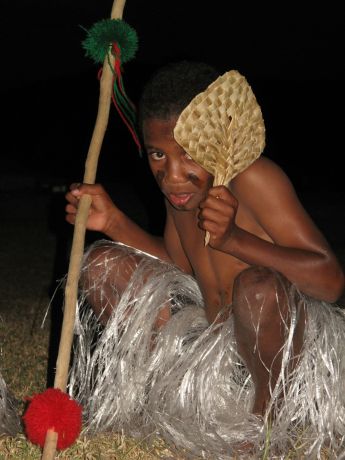 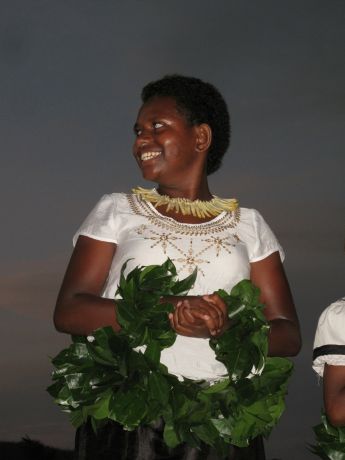 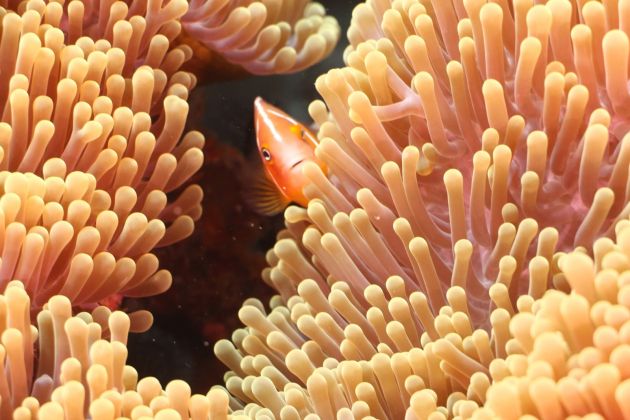 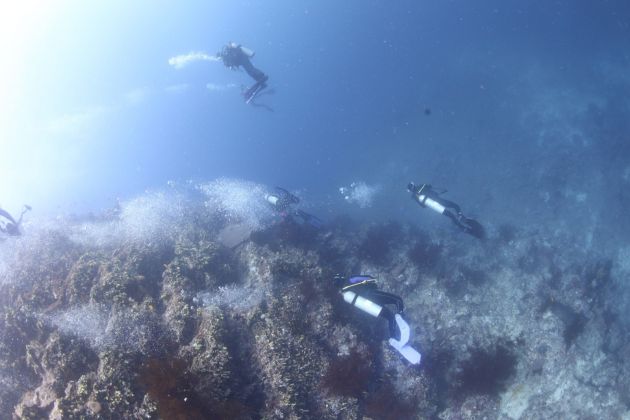 Divers in the Water by Jim 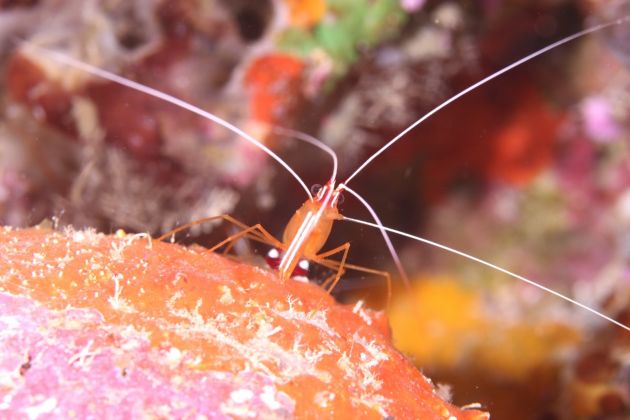 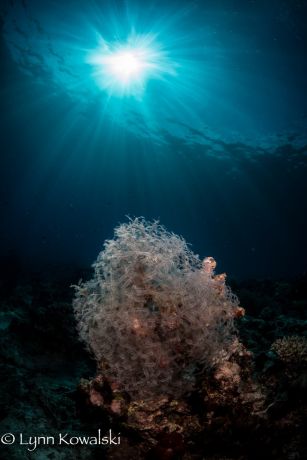 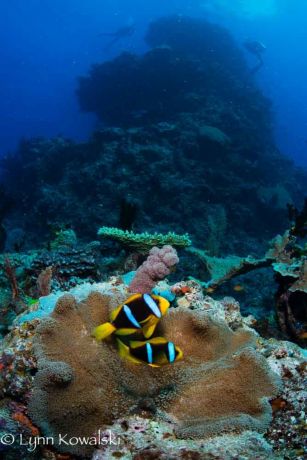 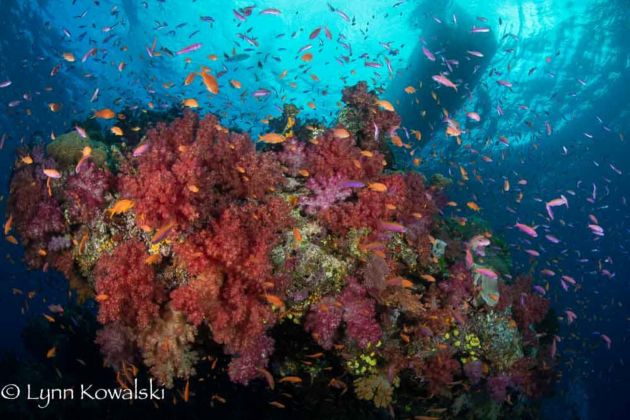 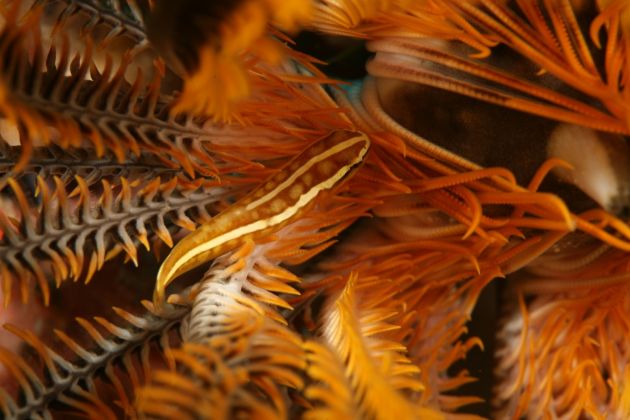 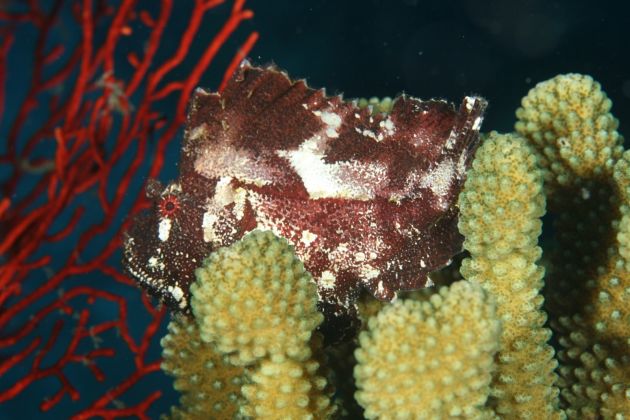 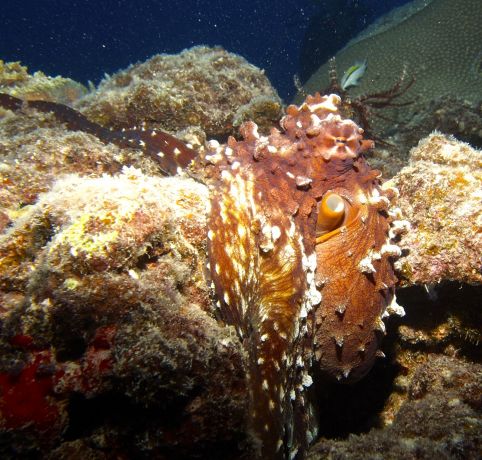 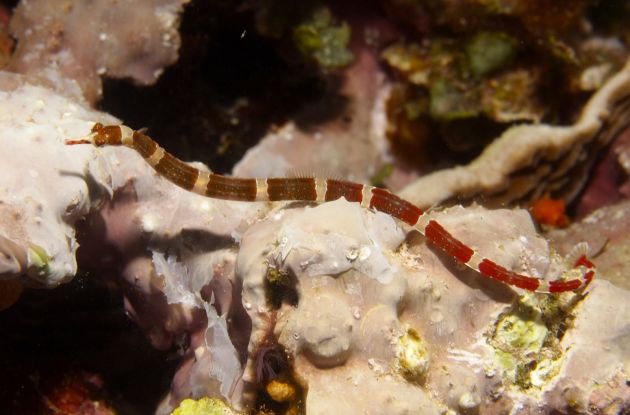 Day 4 saw us arrive in Wakaya after another peaceful overnight crossing. The day began with an unplanned Leaf Scorpionfish spotting contest. Final Score: Jon 1, Chad 1, Vanessa 1, Big Mo 1000!!! The following dives, whilst we saw many wonderful creatures, can really be summed up with one word: MANTAS!!!!!! Not to be outdone by Hergen the previous day, all of our divers got to enjoy these gentle giants cruising along at Vatu Vai and Blue Ridge. It's a privilege to share the water with such stunning creatures, and it's a moment none of us will forget I'm sure. We ended this wonderful day with a much-anticipated village visit on the island of Makogai. Nai'a has had a strong relationship with these villagers for many, many years and were the first to support them and provide aid after Cyclone Winston hit this February. The village was near-on destroyed and as such our village visits were obviously put on hold as they focused on rebuilding in the following months. This was in fact the first time we've been able to go back in many months and it was great to see the recovery. Whilst it's an ongoing program, the future is bright once more and the ever friendly villagers put on a great show of singing and dancing for their Nai'a guests, including our excellent elected Chief Burt (who abdicated soon after!). Vanessa and Chad were extremely happy to meet everyone and are looking forward to continuing the friendship and support. The day ended perfectly with the official Kava Party kicking off on the dive deck, the Nai'a crew wowing everyone with their musical talents...

After a slightly bumpier crossing than previous nights, the gang still woke up chirpy and ready to go on Day 5. We hoped for great things from the dives at Vuya and, boy, we were not disappointed! Cat's Meow and Vatu Vonu were both kicking OFF with perfect conditions: just enough current to plump up the soft corals and bring out all the fish, but not so much as to make it too much like hard work! Both Mo and Chad showed their guests a beautiful pair of pygmy seahorses, Chad not taking his eyes off it for a second until everyone had seen it. Phil spent many minutes trying to get a photo of the well camouflaged crinoid clingfish: being a good responsible diver, he didn't forcibly 'encourage' the little guy into a better position, but instead waited patiently till the perfect shot presented itself. Thank you Phil! In the meantime, Vanessa tried her darnedest to show Vince and Orie a completely transparent Cuapetes shrimp: Orie was convinced Vanessa was tricking him and was actually pointing at nothing whatsoever....the macro photos will tell the truth when we see them! Many declared this the best day of diving yet and so we all retired to bed tired but content.

Our final day brought us back to the ever-pleasing Vatu I Ra. Lynn and Hergen were super-happy to get more time shooting the stunning soft corals and beautiful topography of Coral Corner, Vanessa's group had a particularly sharky dive with at least ten grey and white tip reef sharks cruising confidently on by and Chad's group were mesmerized by the yellow Dendronepthia and schooling Anthias at Mellow Yellow. Rough weather creeped in as we approached lunchtime so we decided to err on the side of caution and have a dry afternoon. The group had a nice lazy few hours going through their photos in the salon before we presented the awesome guest slide show that evening.

And so our week at sea drew to a close. A heartfelt thanks to all who joined us aboard the Nai'a: we had a wonderful time diving with and getting to know you all. Until our bubbles cross again!