Before this week began, Cruise Director Amanda would need a crash course in Southern drawl. I spent four years at Duke University in North Carolina and have a Hoosier father, so I am well versed in the accent, but even this experience wouldn't prepare us for the invasion of Fiji from a group of skilled divers from Eastern Tennessee. I guess terms and lingo really vary from state to state because I never heard phrases like "slicker than deer guts on a doorknob" and "Jeez o' Pete!" Lead by dive store owner and travel coordinator, Alan, 15 ambitious divers from one of the most beautiful (and landlocked) areas of America descended upon Fiji. Joining them were Michael and Iris, a lovely couple of New England transplants to Arizona and Katja, the German girlfriend of another Tennessean. One of the best parts of having a group of guests who are all old friends is that no time is wasted before the ribbing begins!

Our check dive at Samu Reef was a bit murky, but fortunately, not indicative of conditions for the remainder of the week. This week would yield splendid conditions and memorable sightings. Our first full day of diving would take place in the area of Vatu-i-Ra. This day was marred by the passing of the mother of our keen and talented divemaster, Big Mo. The entire crew rallied around our co-worker and friend in support during this tragedy before dropping him off on the Viti Levu and carrying on with the charter down one very important man.

We returned to one of our favorite sites of the area, GoMo, a reef so cluttered with coral and fish that it is almost impossible to focus on one thing. An unimaginably large school of horse eye jacks and a tight band of Spanish mackerels pursued a swarm of fusiliers. Catherine often employed her underwater hand signal for being overwhelmed by natural beauty by tapping her heart with one hand and gesturing broadly towards the reef with the other. Meanwhile, other divers experienced a classic Coral Corner dive, complete with sharks, scorpionfish, nudibranchs, shrimp and a leaf scorpionfish we had never seen before.

Continuing with our drive to impress, our next stop was at the staggering seamounts of Mount Mutiny and E-6. Amanda led her group deep down Mutiny in search of sharks and did not return disappointed. Circling in the deep blue were several silvertip and grey reef sharks. It seems to be that time of year for the orange-finned anemonefish as we managed to find patches of tiny eggs next to their home anemones at several different dive sites throughout the week. Using a high-powered macro lens, Alan was able to capture a photo that reveals the eyes of the developing embryos! Who needs ultra-sound when you've got clear eggs? A stomach bug forced Alan to skip several dives and several meals, but he always seemed to feel better when dessert was served.

From there, we headed west toward the beautiful island of Wakaya in search of larger marine life. There were some cool sightings such as sea turtles, mating lined nembrotha nudibranchs and the mysterious winged pipefish, but the real highlights of the day were unforgettable manta encounters. In fact, many of the divers were thrilled with six close encounters with four manta rays on one dive. The first one measured at least 12 feet in wingspan. On another encounter, the elegant manta cruised over the top of the bommie to get cleaned, then circled to get a closer look at the group gathered to watch him. As it neared us with its huge mouth agape, Paula turned to flee, fearing that the graceful creature would collide with her, but I turned her back around so that she wouldn't miss a moment as the manta glided by close enough to touch! But wait, there's more! With just a few moments left in the dive, a fourth manta swooped up from the depths and right in between Peggy and Sharon, who were hovering next to the wall less than 10 feet apart! Every evening, these ladies would join their friend, Karen, who chose serious relaxing in favor of diving during this trip, for drinks while watching the sunset.

Day 5 took us to the island of Makogai for a focus on more odd macro life. It's here that we can reliably find such well camouflaged creatures like the shortnose pipefish and leaf scorpionfish, as well as colorful anemone shrimp and nudibranchs galore. It was around this time that would-be Chief Bobby said to heck with pulling on a full wetsuit every dive and braved the chill in a shorty. After a day of diving, our guests visited the island where villagers hosted with distinctive aplomb. Kava flowed, cameras flashed and villagers and guests danced to the catchy rhythms of traditional Fijian tunes. That evening, we celebrated Catherine's birthday with cake, ice cream and more song. 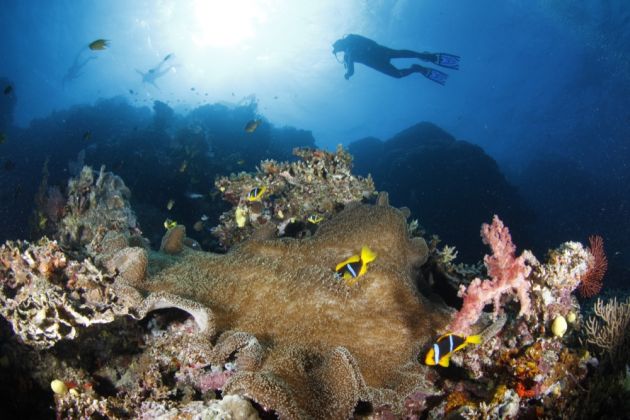 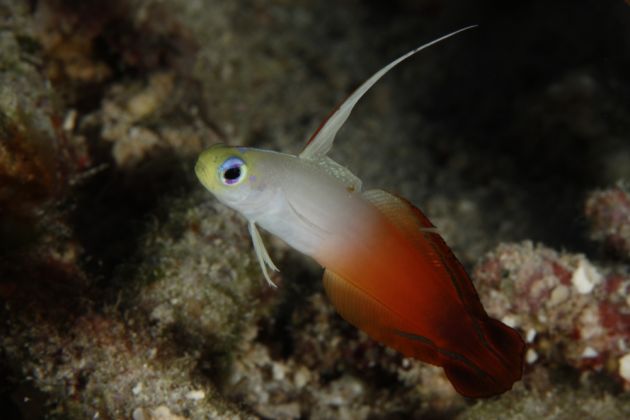 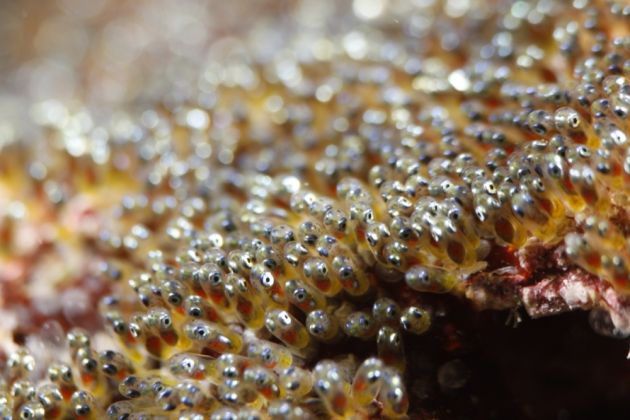 Incredible macro photo of anemonefish embryos in the egg! - by Alan 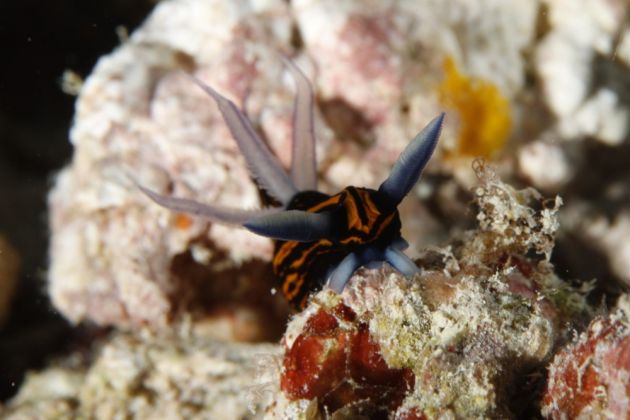 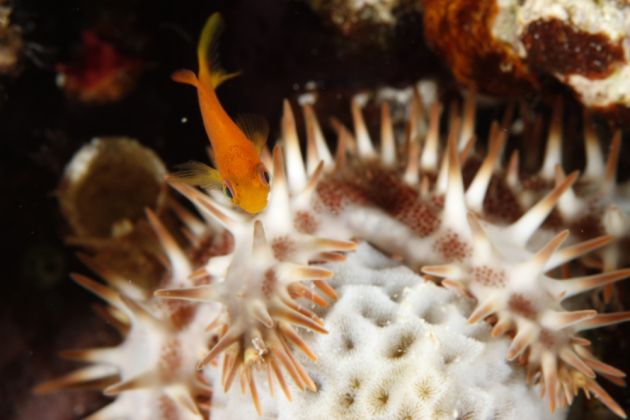 Back off - by Alan 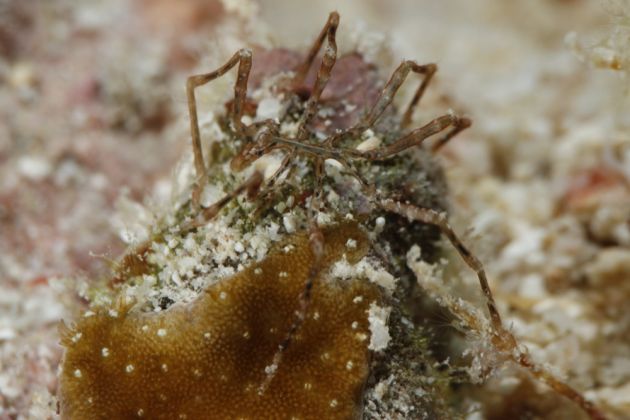 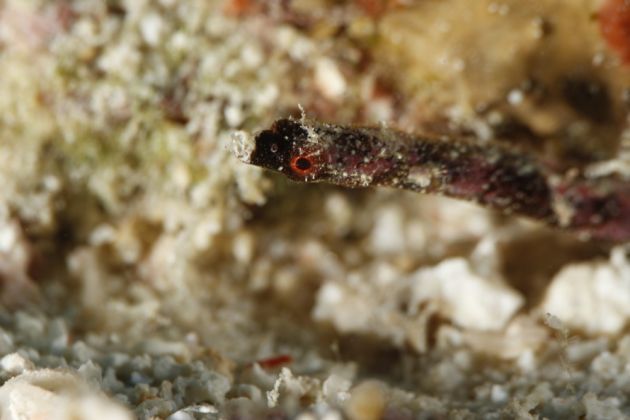 Short on time - by Alan 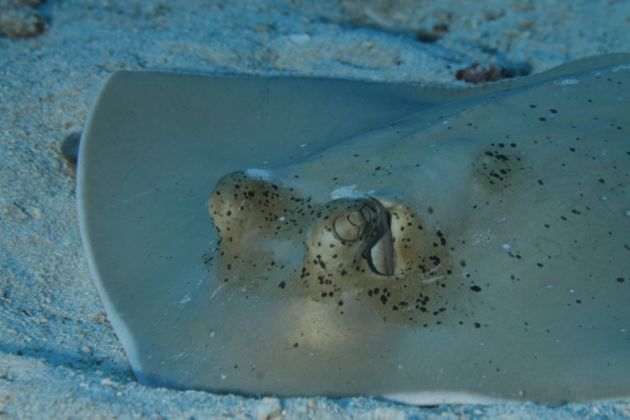 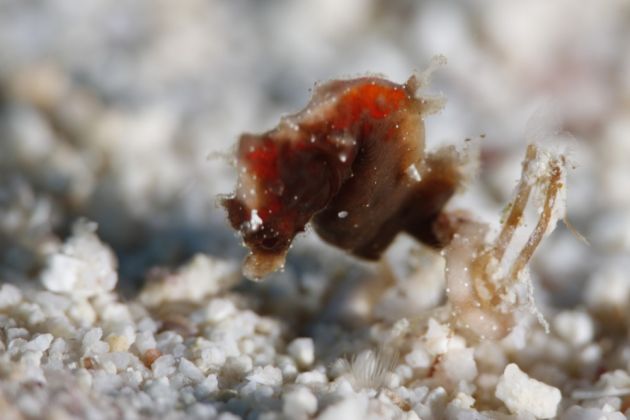 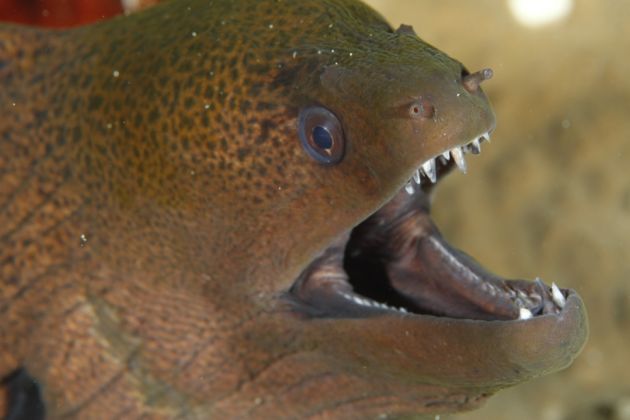 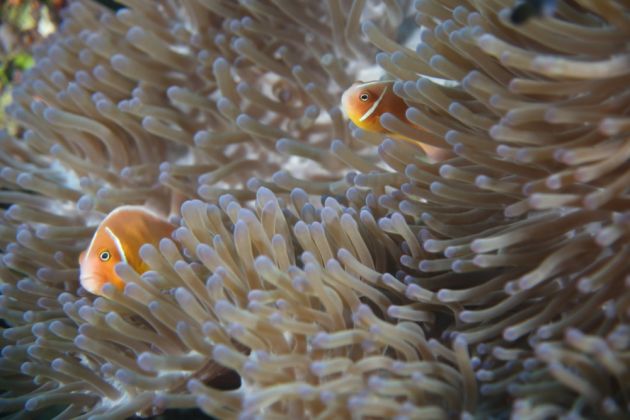 No clowning - by Bobby 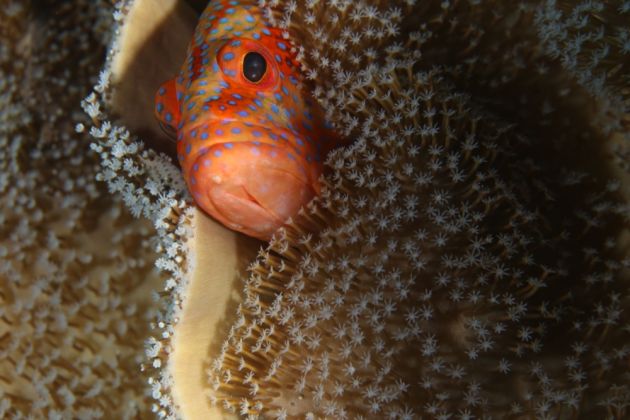 Hide and seek - by Bobby 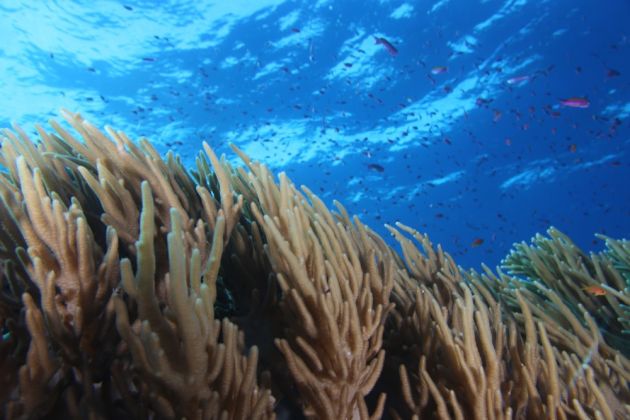 Amber waves of grain - by Bobby 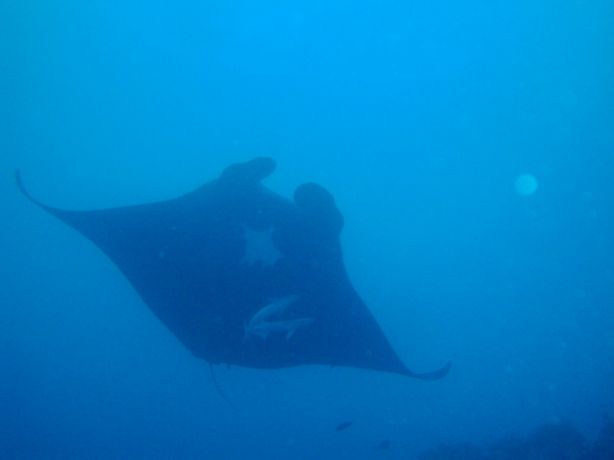 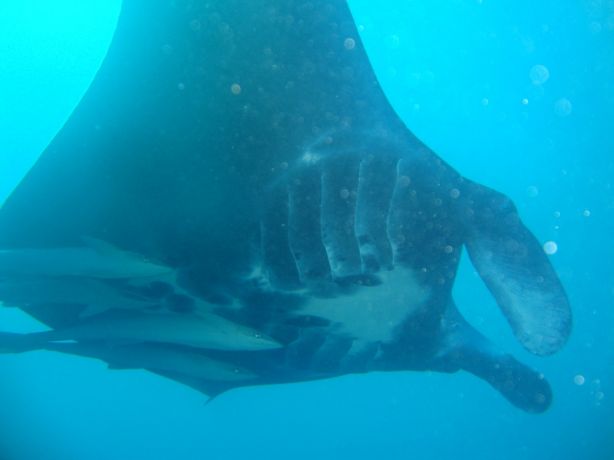 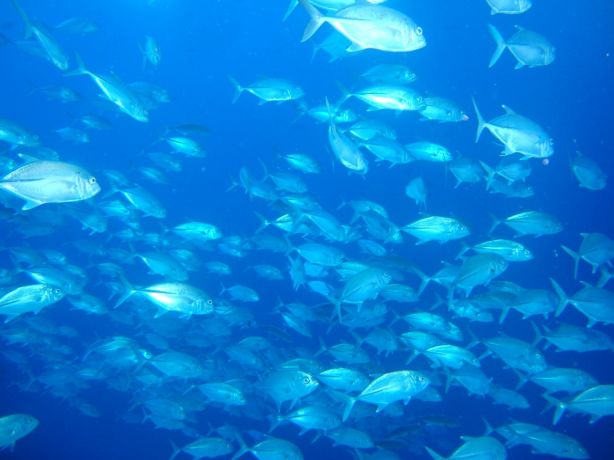 School's out - by Holli 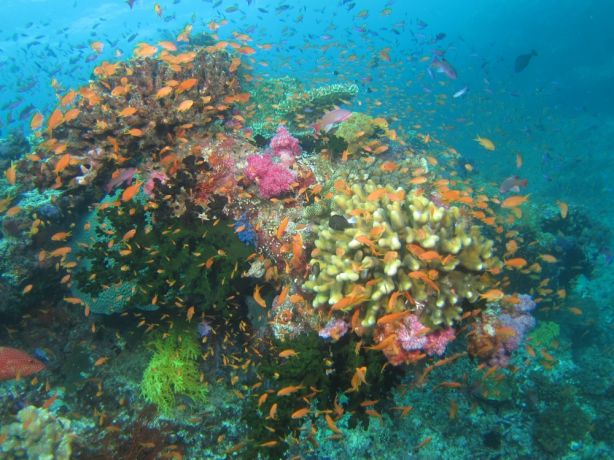 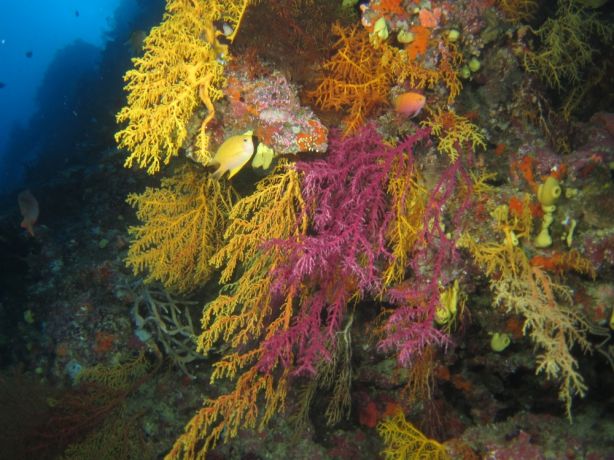 Dripping with color - by Michael 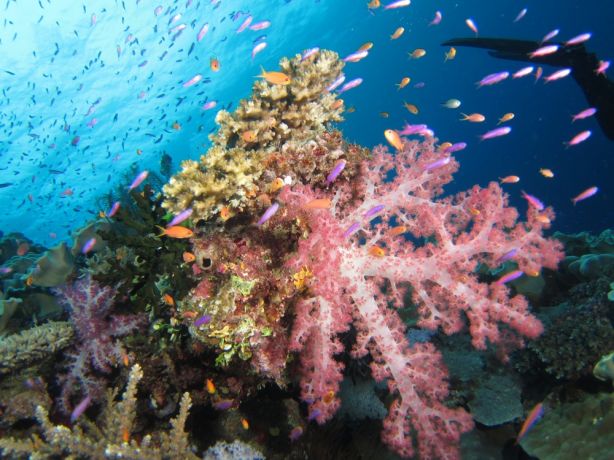 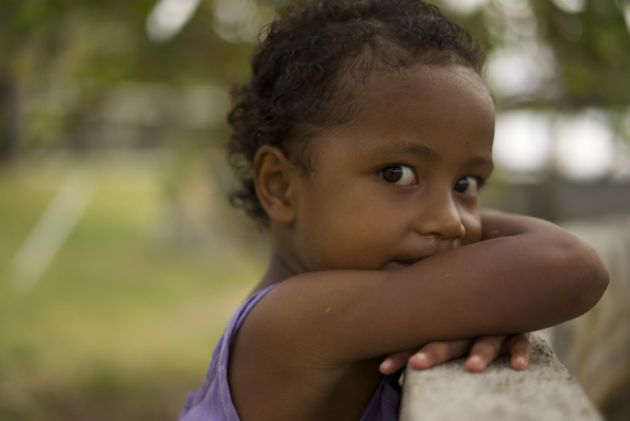 The timing couldn't have been better to visit the Namena Marine Reserve. All week was like a build-up for this experience. Namena really has it all: vivid reefs, schools of fish, large predators and fascinating macro. From a grand pleurobranch wedged under a ledge at Tetons I to the blue ribbon eel of Tetons II and octopus at Magic Mushrooms, we really got a taste of a variety of interesting marine life. But all of that would pale in comparison to the exciting dive at Grand Central Station. There, we saw grey reef sharks chasing tuna in the blue, octopus gliding across rubble and shortnose pipefish and pygmy seahorses clinging onto gorgonians. Late in the dives, our divers ignored there beeping computers to gaze in wonder at these beauties. Kansas continued to impress during the night dive as well, when a few divers saw octopus mating. In case you've never witnessed this event, it's kind of like you might picture it.

That evening, our crew invited the guests to join them for a kava party. This traditional beverage wasn't particularly popular among this group of guests, one of the exceptions being Richard. This firefighter/ambulance manager/motorcyclist passed on the small bowls in favor of the large serving bowl to wet his whistle. Vicki certainly got into the music, swaying and shaking her hips to the beat.

For our last day of diving, we returned to the area of Vatu-i-Ra, where there are plenty of dive sites to entertain us. As we neared full moon, however, the currents here became strong and unpredictable. While this made the diving more challenging, it also brought more life and color to the reefs. Paula certainly came the furthest this week, greatly improving her skills as a diver by confronting some of Fiji's famous currents. At Coral Corner and Mellow Yellow, we showed the guests that managed to stay down long enough all of the critters that make these dive sites popular. Captain Johnathan led a group on Alacrity, a dive site we rarely visit during the day and we closed out an eventful week with a particularly rare and difficult to find fish, the robust ghost pipefish.

By the end of the trip, Amanda and I had several invitations to visit folks in Eastern Tennessee and it's something we would consider... as long as there's a basin full of Andouille sausage and mudbugs waitin' for us!

"This has been one of the most fantastic experiences of my life. Not only was the diving awesome, but every aspect of this trip was superb. I was especially touched by the sincerity of friendship I experienced from the crew and members of the village we visited."

"The people, the islands, the boat... You went out of your way to make us feel welcome. The memories and friends made, both old and new, will be with us for all our days. Thank you all and, if we ever meet again, we will count it as an added blessing."