What a week we had! Lots of sharks at Nigali, check! Mantas in Wakaya as well as Gau, check! Big fat Tunas and endless Barracudas, check! Pygmy Seahorse, Bubble Coral Shrimp, Porcelain Crab. Check, check, check! We saw all creatures, big and small, in fabulous weather! Mellow Yellow had one of its best days and we even saw a Blue Ribbon Eel!

Well… we can say this was a very diverse group for sure. We had some young new divers, some old timers who hadn’t been to NAI’A (or the Pacific) before, 4 lovely return guests and an active couple as well as a Fiji old timer. With two birthdays at the end of the trip, we had a lot to celebrate! 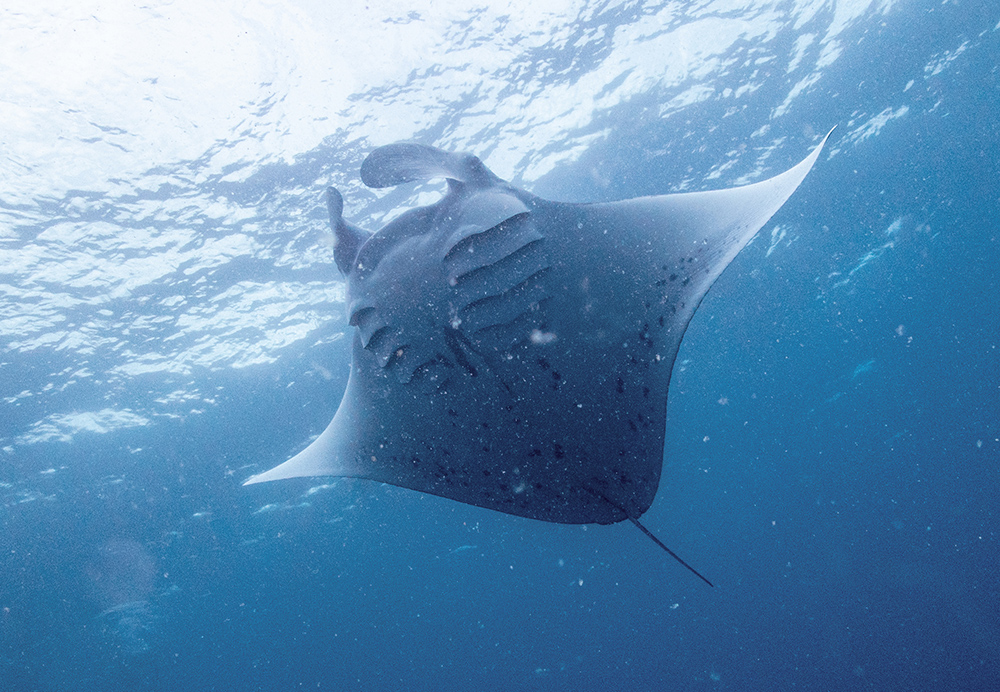 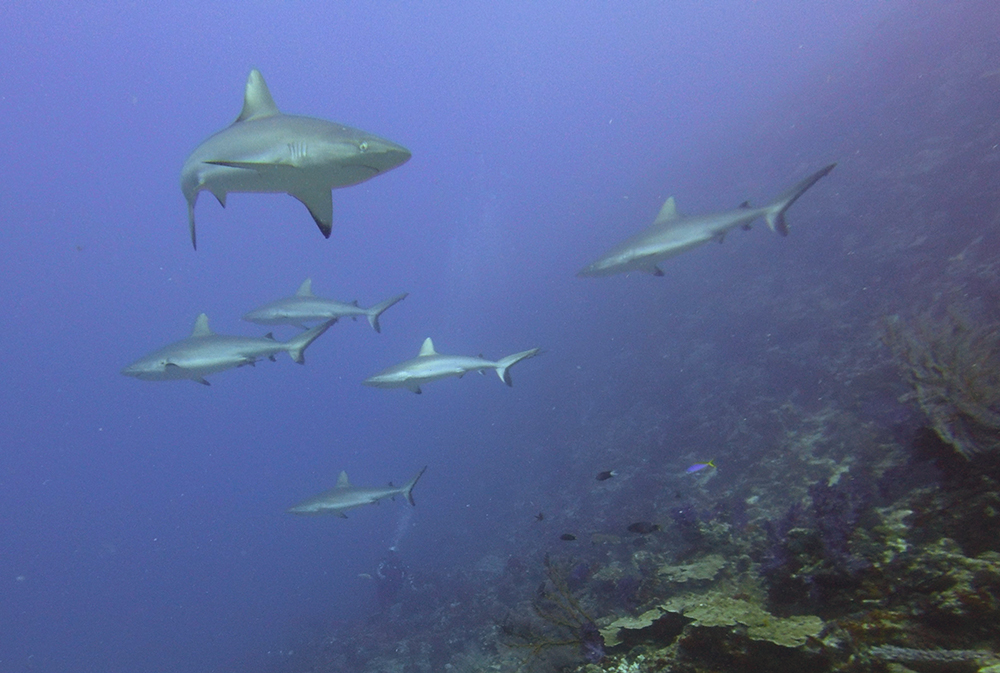 Photo by Jim: Sharks at Nigali 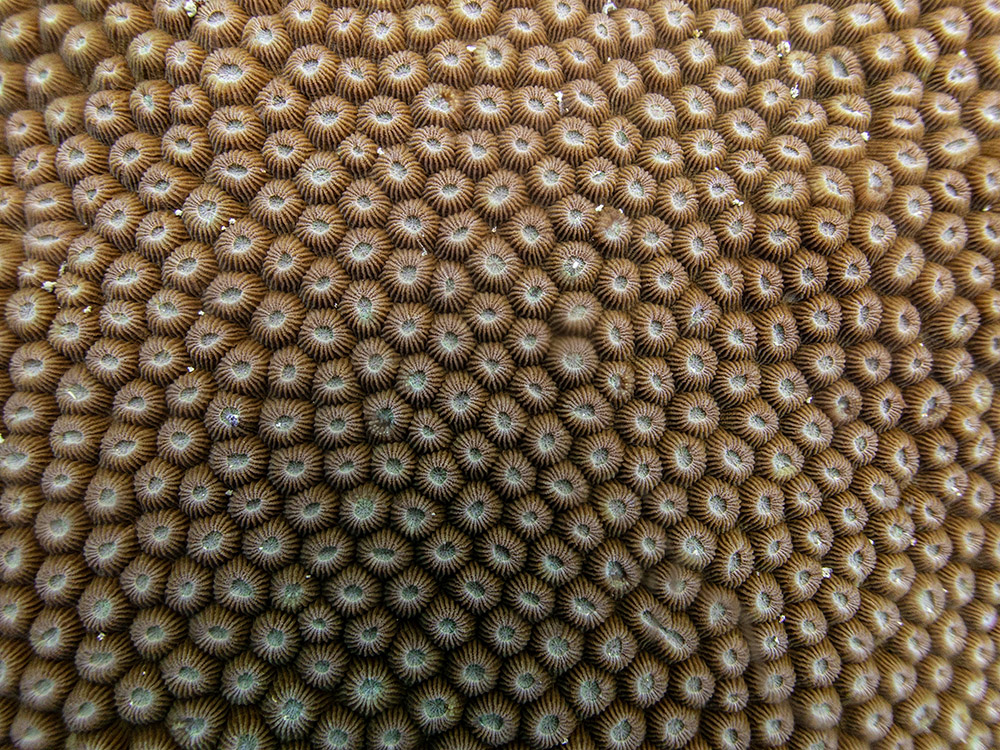 Our first day of the journey was at Vatu-i-ra, and Mellow Yellow was having one of its fabulous days with enough current to keep everything extra colorful but very manageable. Definitely the dive site of the day! On our other sites we also saw White Tip Reef Sharks, Eagle Rays, Spanish Mackerels, Mantis Shrimp, Barracudas, splendid soft corals and stunning hard corals. The current was outgoing all day and we made the most of it! On the night dive, tons of Decorated Crabs and a lot of planktonic activity. Also… curiously just one lonesome Staghorn Coral spawning for about 15 minutes…

Then we moved to the Sea Mounts, and Jim came back saying he hadn’t seen colors like that since he was on the Disney Submarine Voyage ride “a few” years ago! I mean… kids get impressed, but I think Disney has nothing on Fiji’s underwater colors! We saw more White Tip Sharks, Nudibranchs, Barracudas, Dogtooth Tunas and a little Turtle missing a back flipper. Some guests skipped dive 4 and visited Vatu-i-ra Island and saw Birds, chicks and eggs. For the night dive, we dived in front of Vatu-i-ra and saw some Pygmy species of Scorpionfish, Spider Crabs, a juvenile Manyspotted Sweetlip and very close encounters with another White Tip Shark, a Green Turtle and three Longfin Reef Squid. 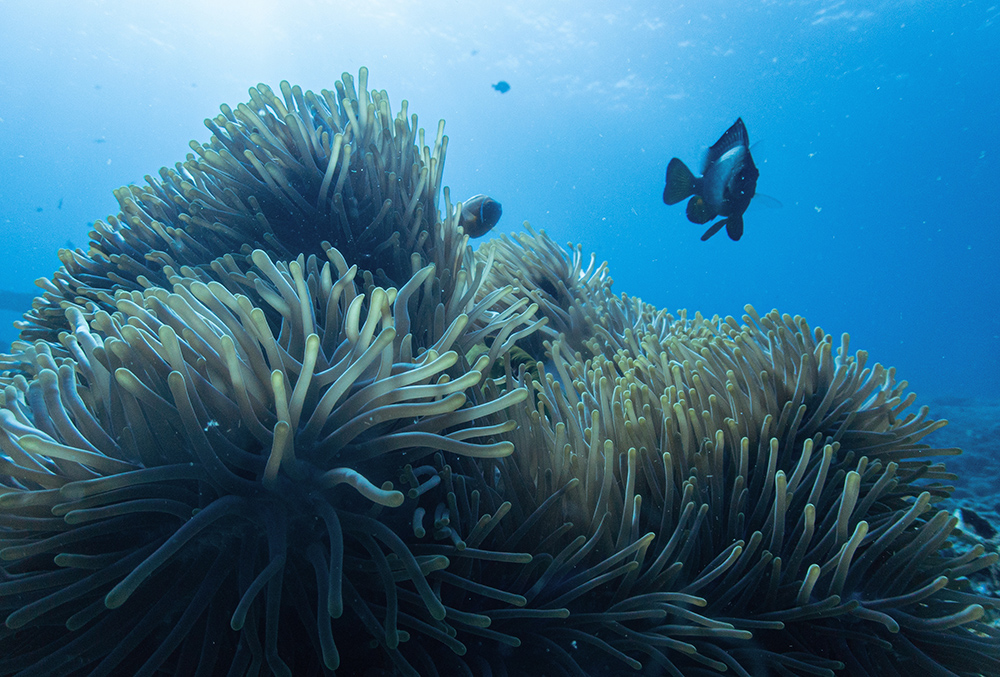 Photo by Bel: Anemone and Fish 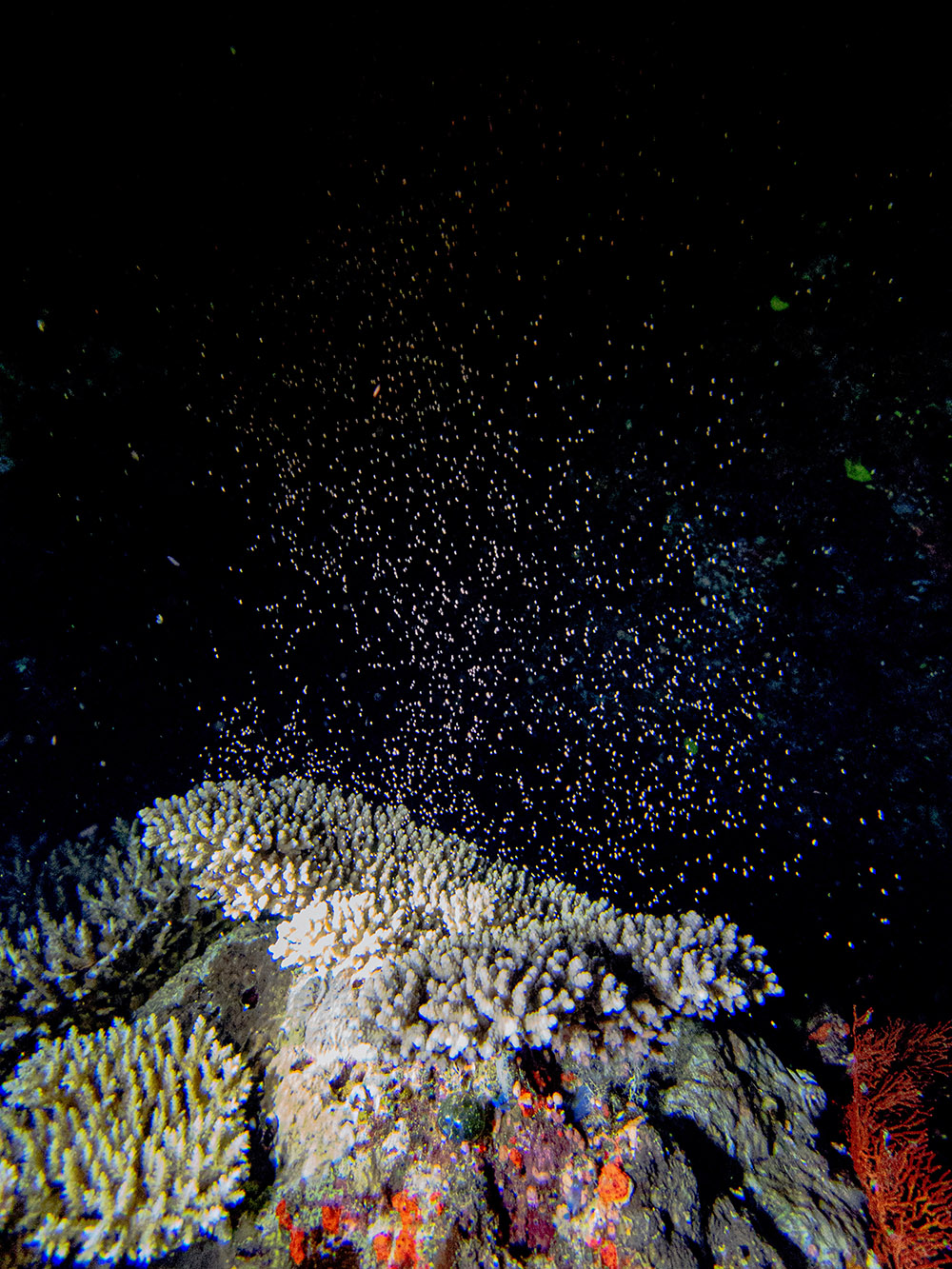 Photo by Vaughn: Coral Spawning... shouldn't it be a group event?? 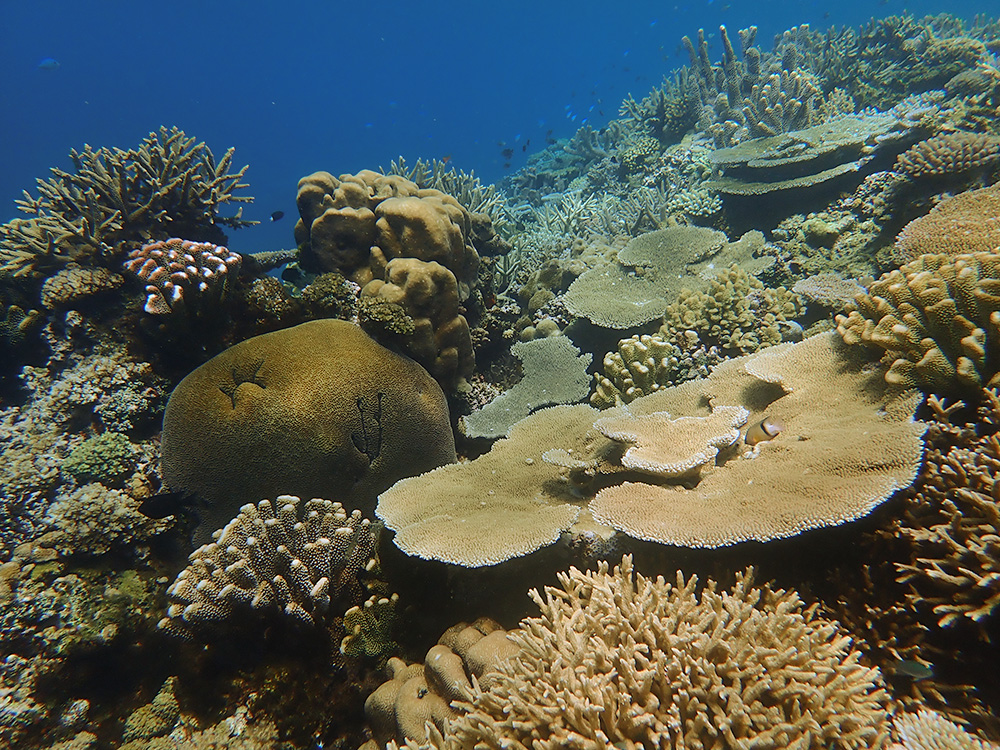 The following day we moved to Makogai in search of Bommies, soft corals and critters. We succeeded on enjoying all three, and Anne got to see not one, but two Juvenile Rockmover Wrasses! We had many Lochis around, as well as Blue Dragons and Phyllidia Nudis. Crinoid Clingfish were abundant, Midas Blennies, Brownbanded Pipefish, Checkerboard Wrasses, Blue-eyed Coral Crab, Longnose Hawkfish, Common Lionfish, Map Puffer and many Titan Triggerfish. The treat of the day was a Leaf Scorpionfish at the top of Ron’s delight! Our kava party was very lively, and our young guests stayed up well past the traditional 20:30 crash that normally occurs! 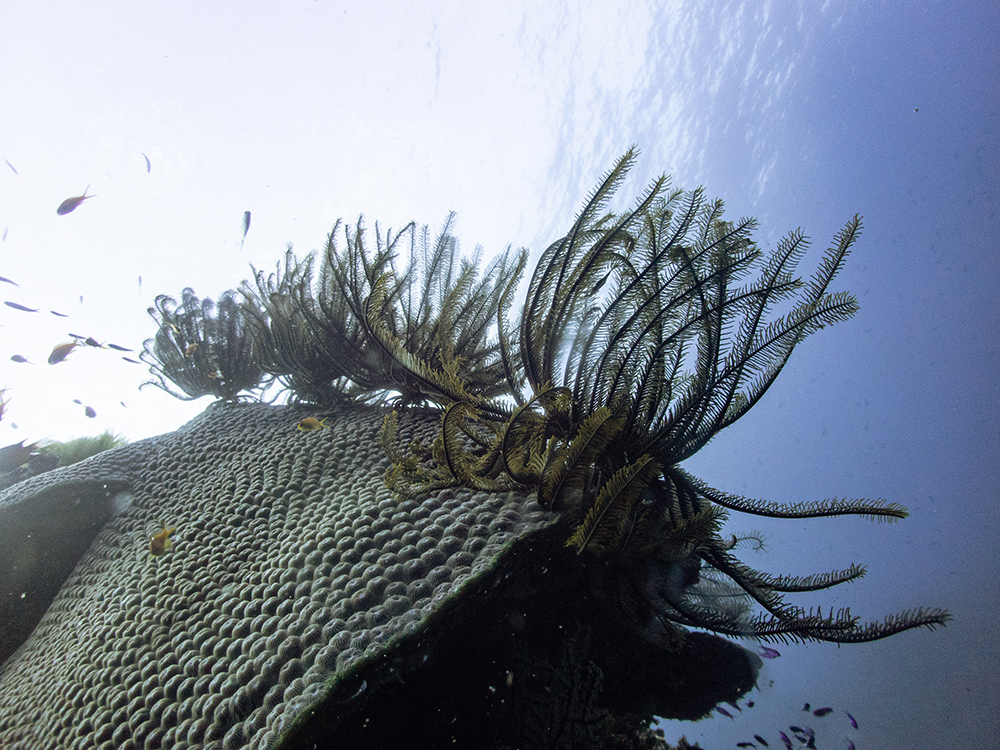 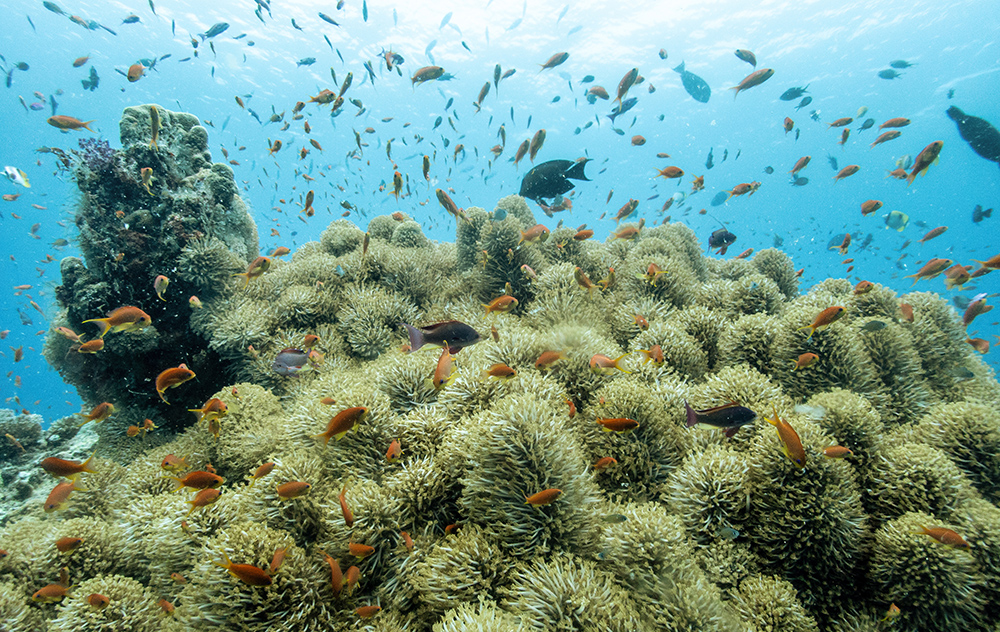 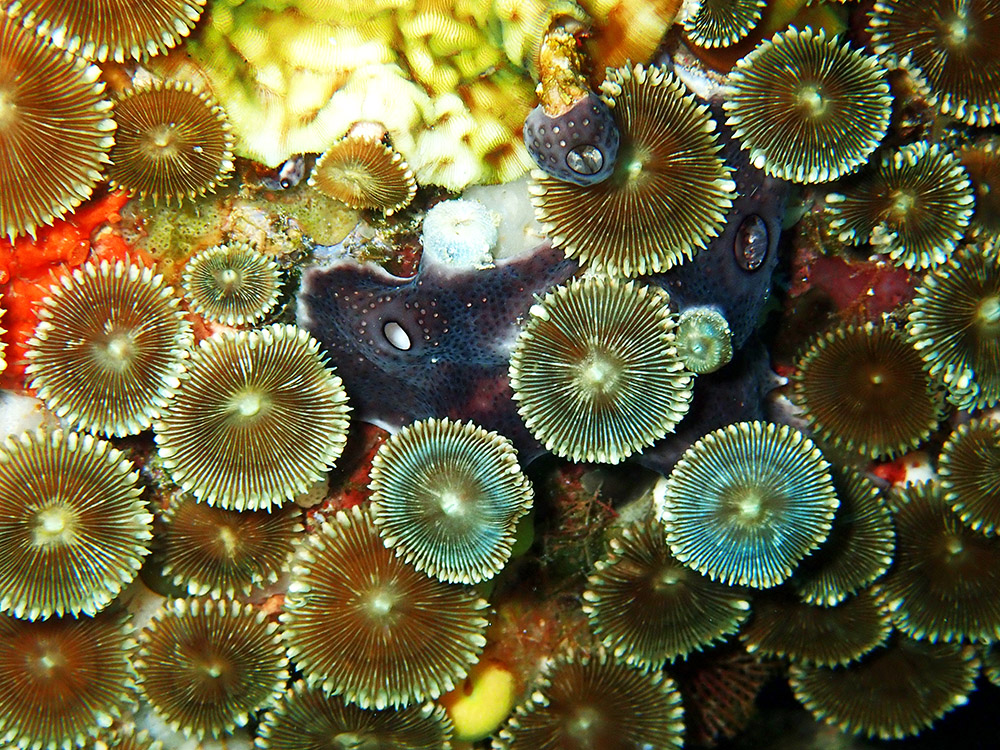 Then it was Wakaya’s turn to give us beautiful, if brief, Manta encounters. Shirley, one of our regulars, spent the whole day going from one end to the other, greeting the divers on her way. Jim saw a Hammerhead and we all saw a big school of Blackfin Barracudas, a ginormous Dogtooth Tuna, some Humphead Wrasses and a few Hawksbill Turtles. Our night dive was filled with planktonic critters, the Mantis Shrimp and several Eels being the coolest ones. 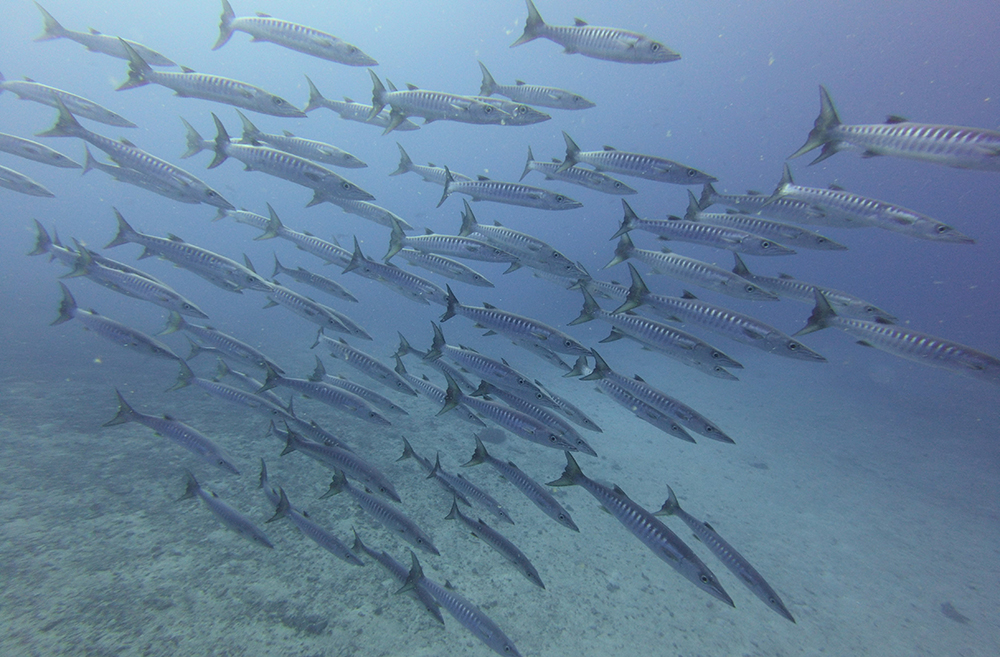 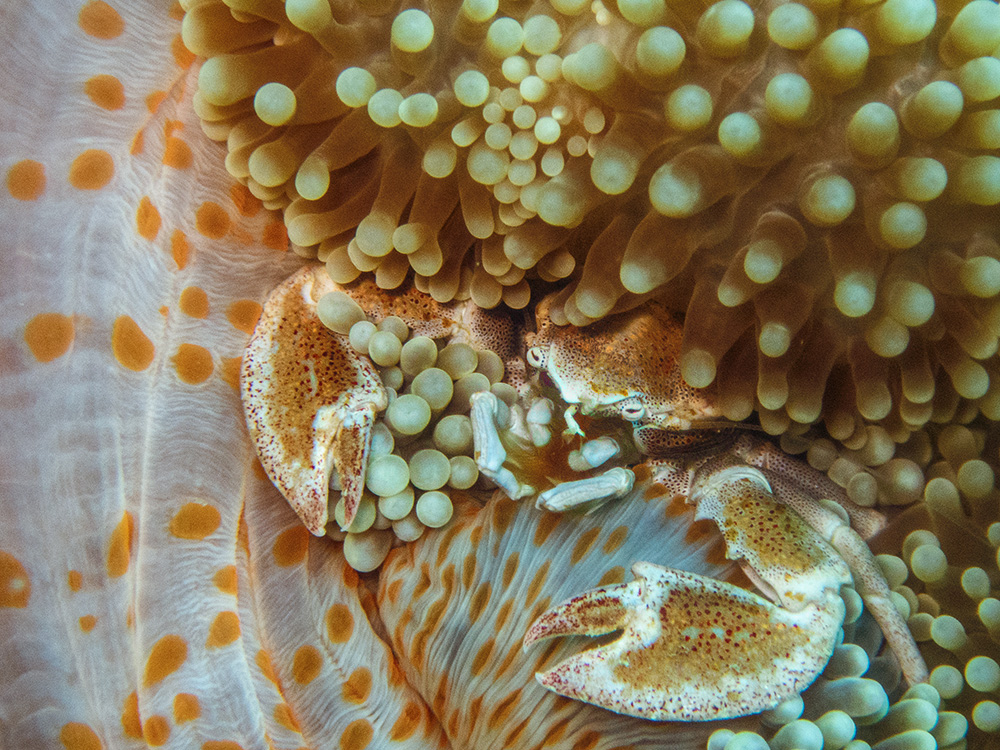 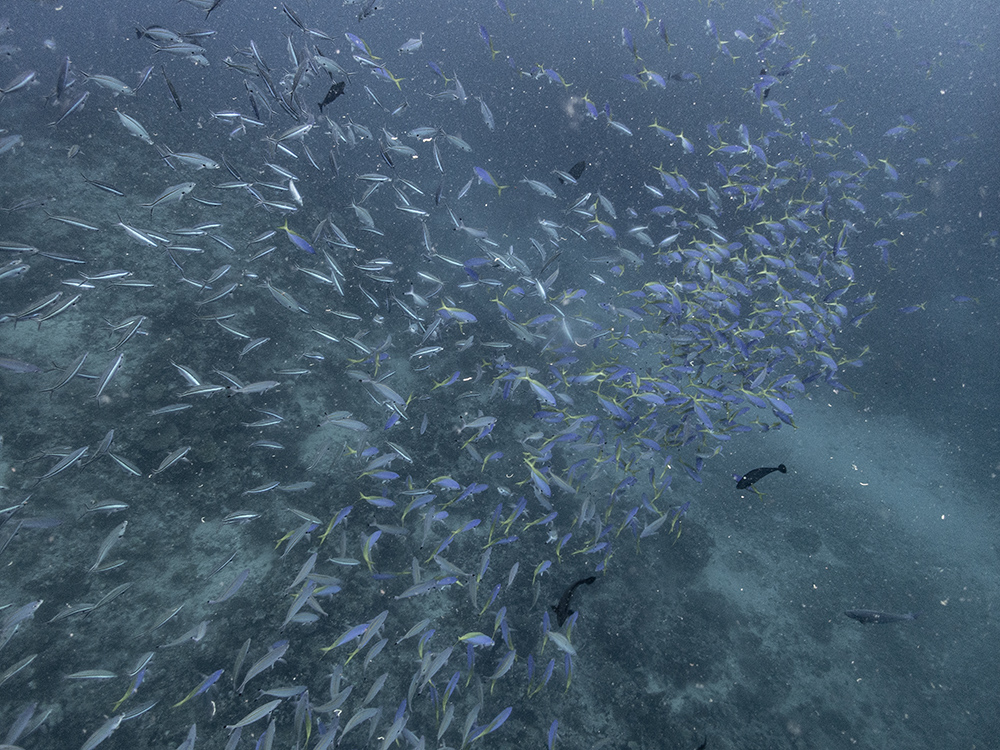 Photo by Bel: You can't see the Manta... but you can feel the Manta!

After a rocky passage, we started the day with a magnificent dive at Nigali Passage. We saw Barracudas parading for us for 6 minutes straight, never breaking the school. Several White Tips rested on the bottom and the Grey Reef Sharks put on a show for us at the bleachers, and a party of 20 was waiting for us as we headed into the lagoon.  Our second dive, at the Outer Slope, was beautiful, but it shadowed against the end of our third dive, when both skiffs had the best safety stop with multiple Mantas feeding right by the bommies. Such a fabulous day could only end with a Village Visit at Somosomo. This is always such a highlight to the trip! 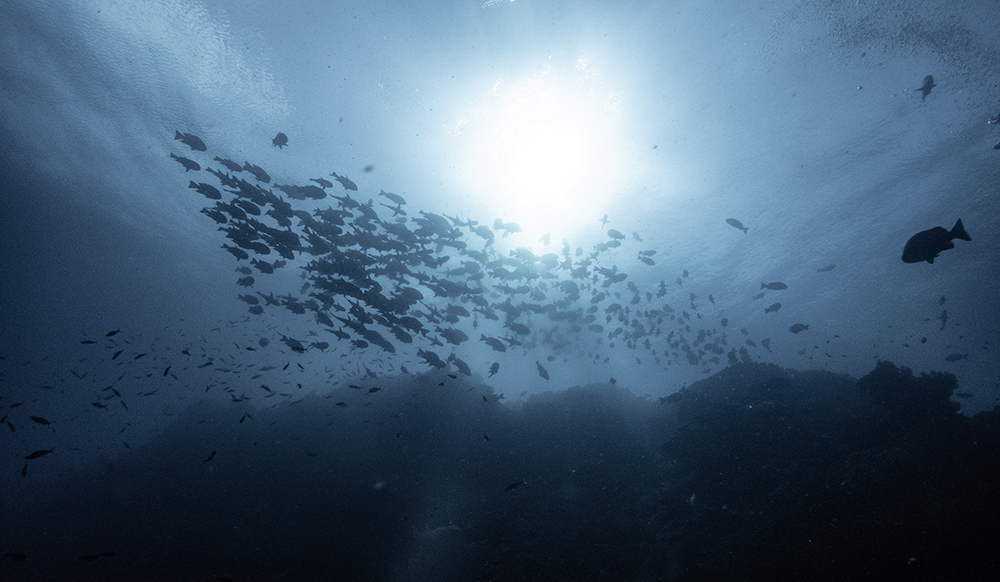 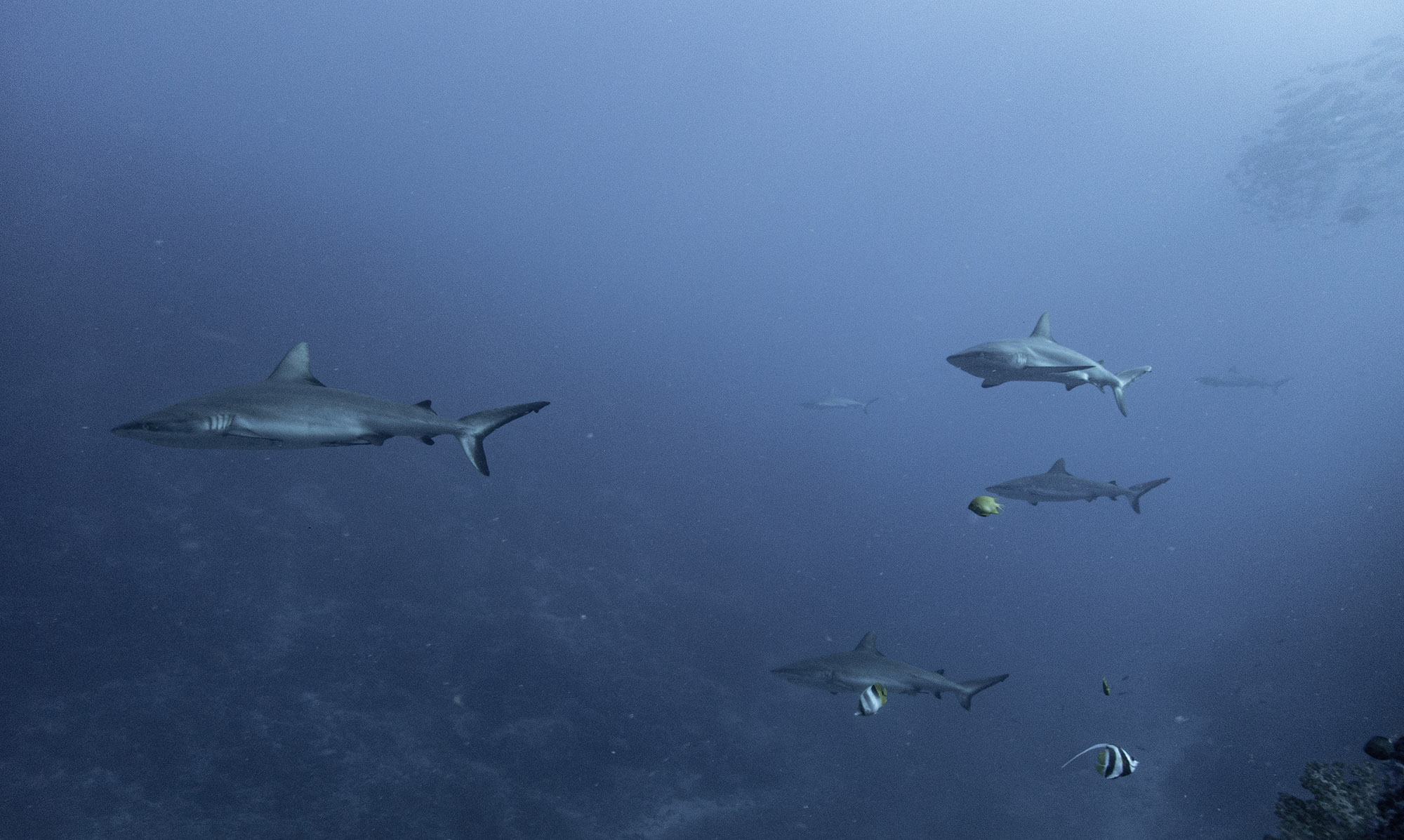 Photo by Bel: A few Sharks 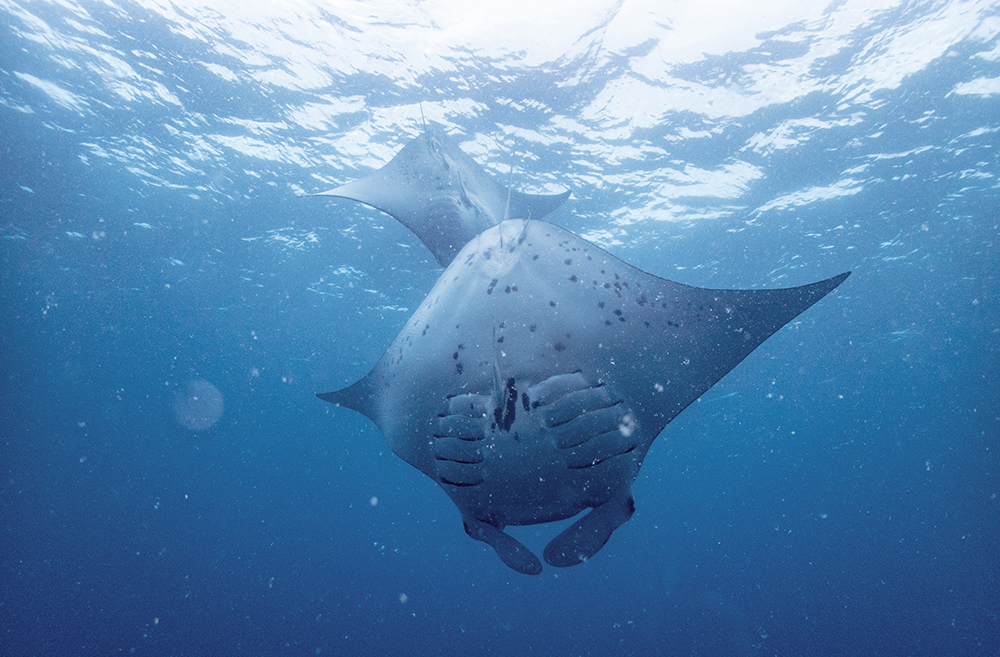 We steamed all night and started the next morning at Cat’s Meow and Humann Nature with lots of Nudibranchs, a couple of four-armed Sea Stars, Scorpionfish, Moray Eels, Bubble Coral Shrimp a ton of activity at the top of the bommies. UndeNAI’Able brough us many huge Blue Dragons, a small White Tip Reef Shark and beautiful gorgonians. And so another trip came to an end and we steamed home, ready for the next adventure to greet us! 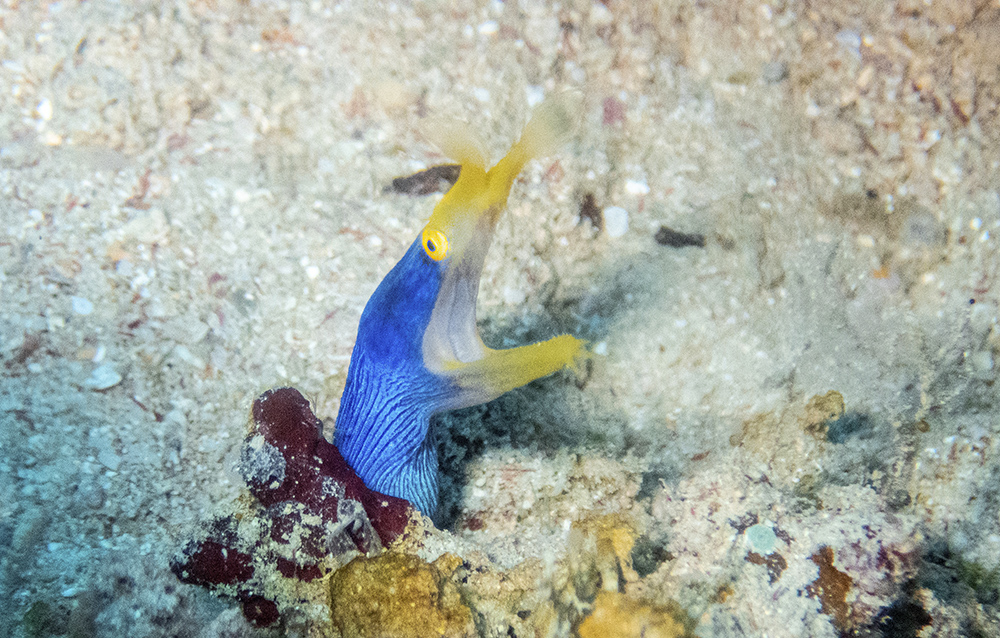 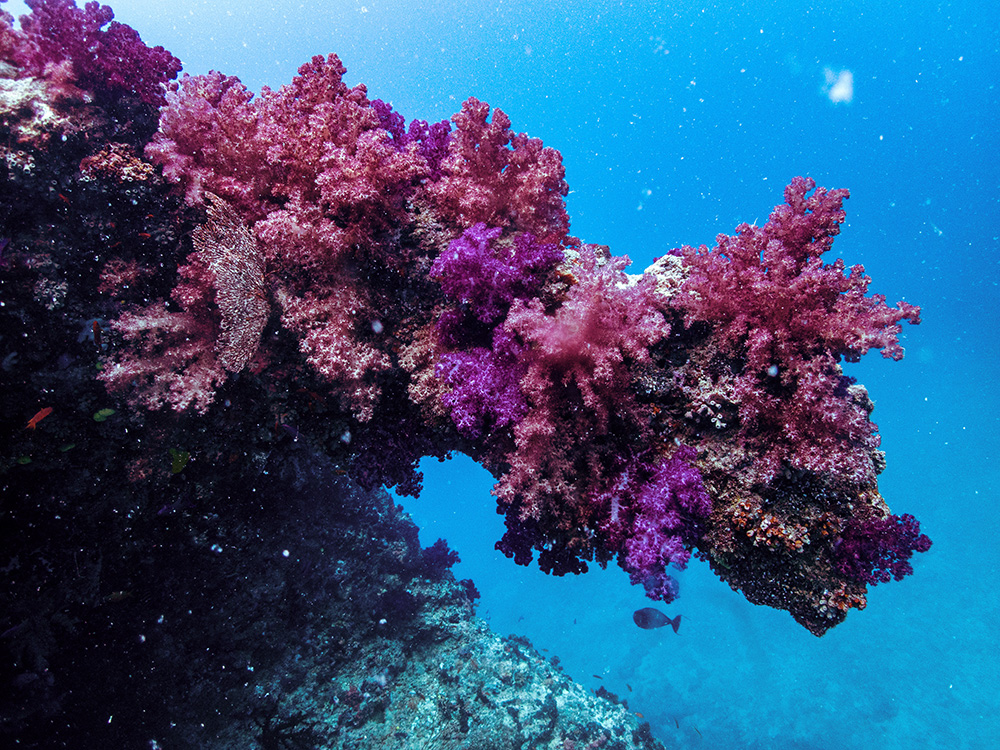 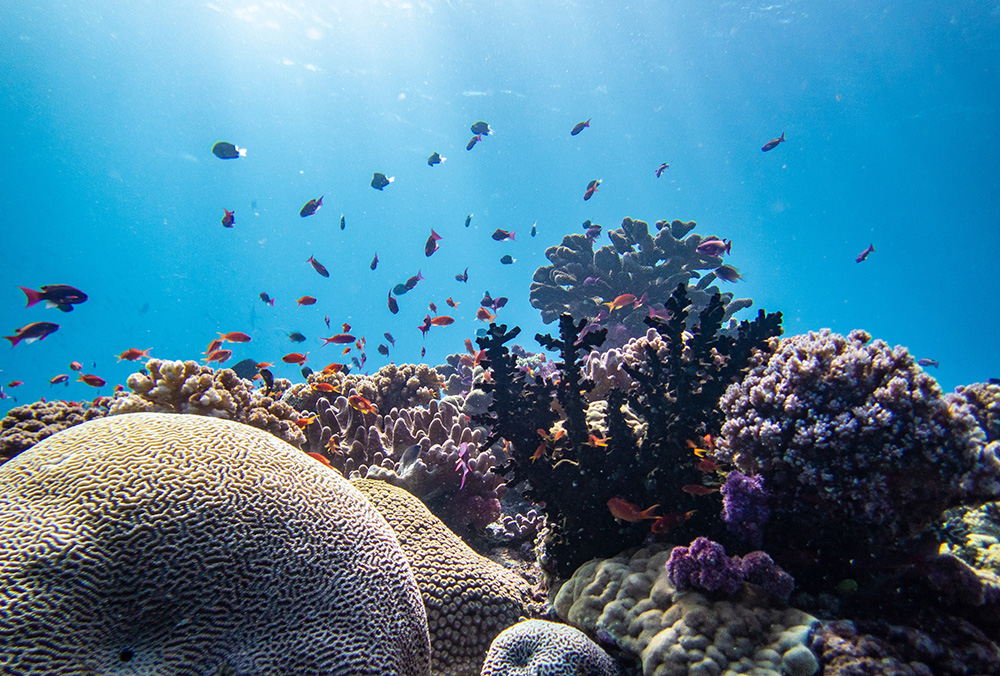 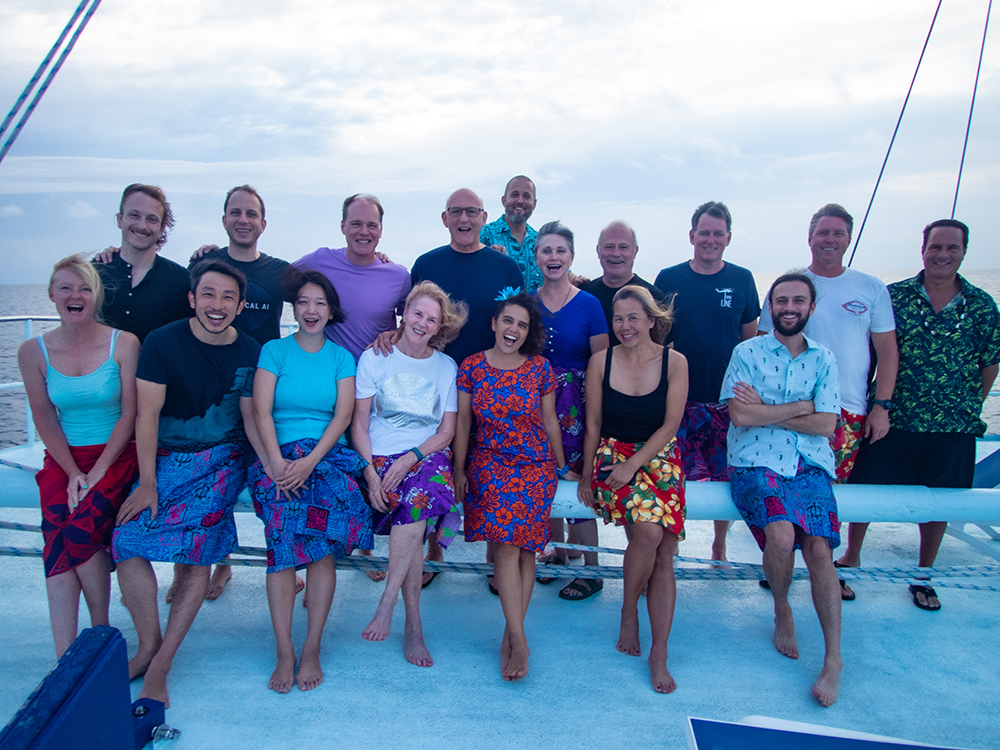