When in doubt, just Bula!

Hammerheads, Mantas, huge Tunas and endless Barracudas kept our Wide Angle photographers and pelagic enthusiasts excited. The macro lovers had their faces buried in the rubble looking for nudibranchs, in the crinoids looking for clingfish or in Sea Cucumbers rear end looking for crabs (OK, that was Bel, the potential proctologist). We had beautiful weather, calm seas and Pilot Whales (twice!). Yes… this one will he hard to top, but we will try! 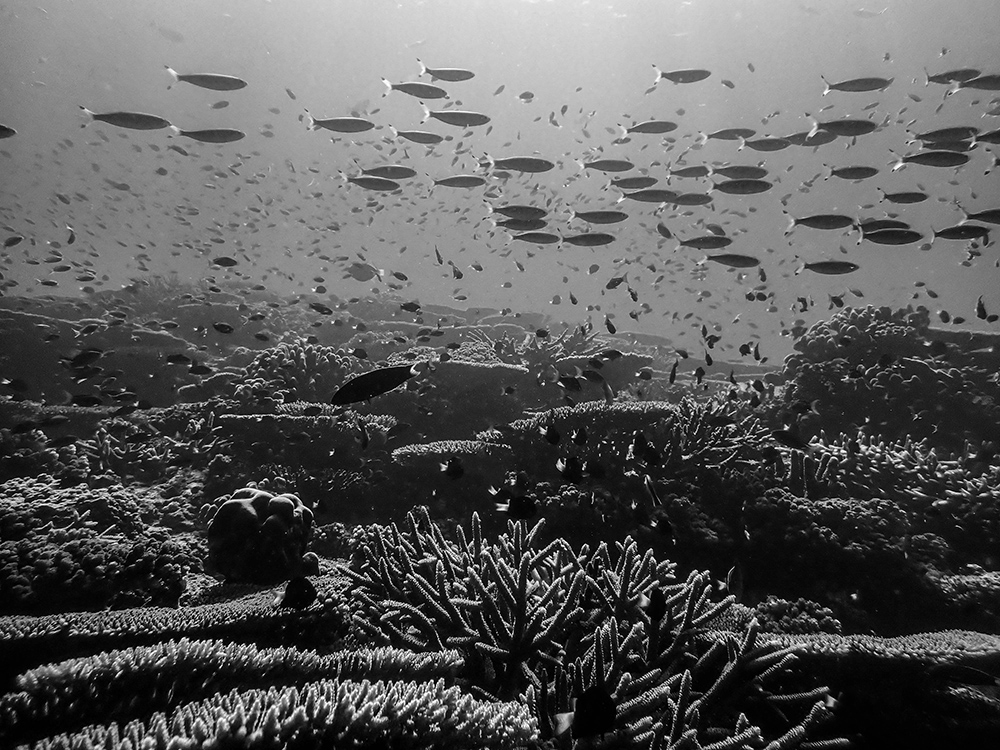 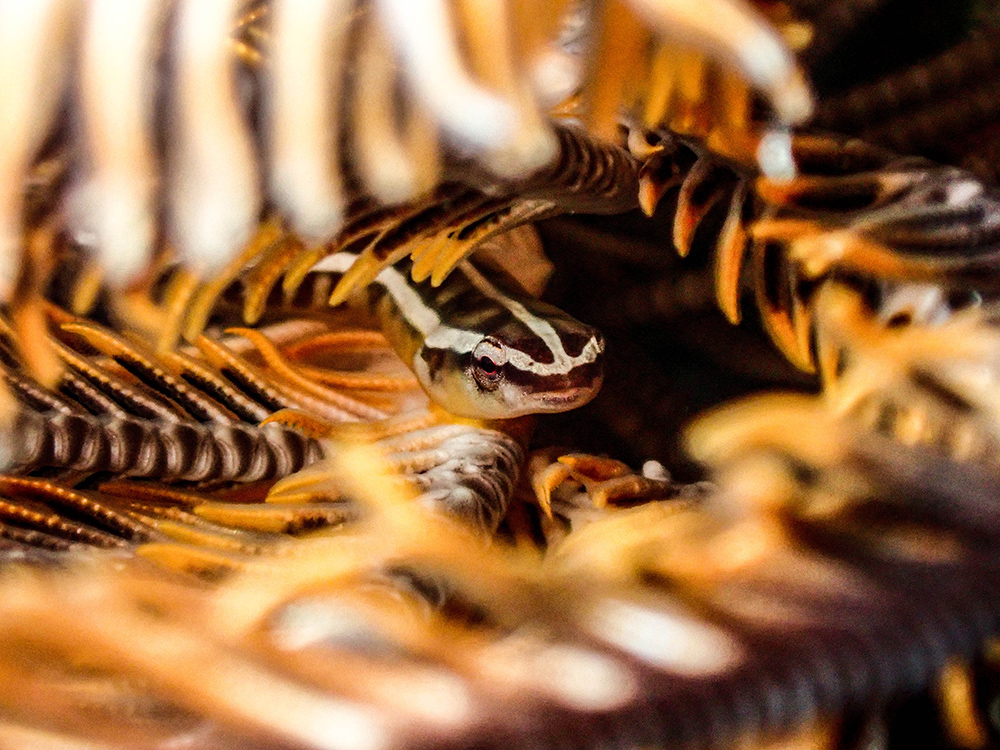 Photo by Bel: One of many Crinoid Clingfish 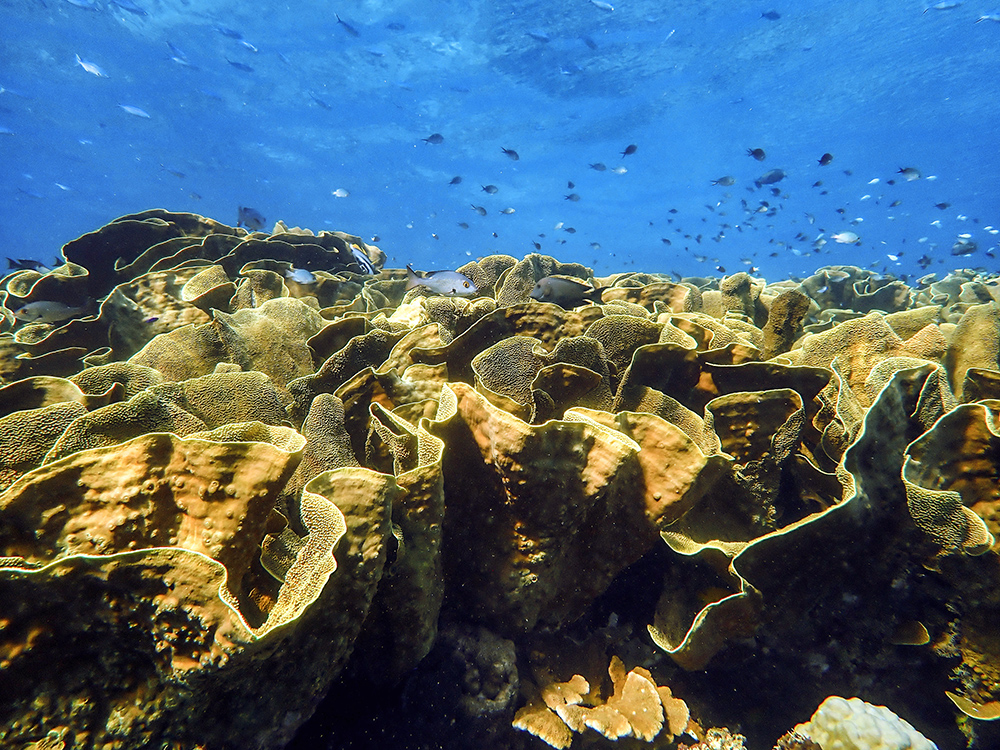 Photo by Bel: Cabbage Patch inside the lagoon at Nigali Passage

After welcoming on board our 15 guests, Bel had the happy realization she would spend this trip in the company of 7 strong, inspirational and compact women. She nicknamed them (including herself) The Tiptoe Club, short but mighty. You gotta hand it to them… you know, because they can’t reach. Puns aside, it’s always a great pleasure to spend time with strong, independent women. And also a book author who dedicated his book to “the thousands of bright, adventurous and driven women who teach, guide and assist the world’s divers” (thank you, Tracy!). The stage was set for a memorable trip with a fun and experienced group!

We spent our first dives at Vatu-i-ra and Vuya with beautiful sightings of an octopus (thanks, Pat!), loads of nudibranchs (a couple having an intimate moment and another laying eggs) and the usual fish ballet at the reef tops of Cat’s Meow, Humann Nature and UndeNAI’Able… just fabulous.

Then we headed to Namena Marine Reserve and it’s fabulous protected waters. We never get used to the abundance we see underwater here. The first day sightings included massive schools of Crescent-tail Bigeye, Bigeye Barracuda and Jacks, a few Dogtooth Tunas and Gray Reef Sharks, Pygmy Seahorses, a Humphead Wrasse, Golden Mantis Shrimp and the healthiest of reef tops filled with hard and soft corals, anemones and a lot of action. Namena never disappoints. At night we saw an octopus, a Bluespotted Stingray, a Chromodoris kuniei nudibranch, Seastar Shrimp and a curious (but shy) shark. 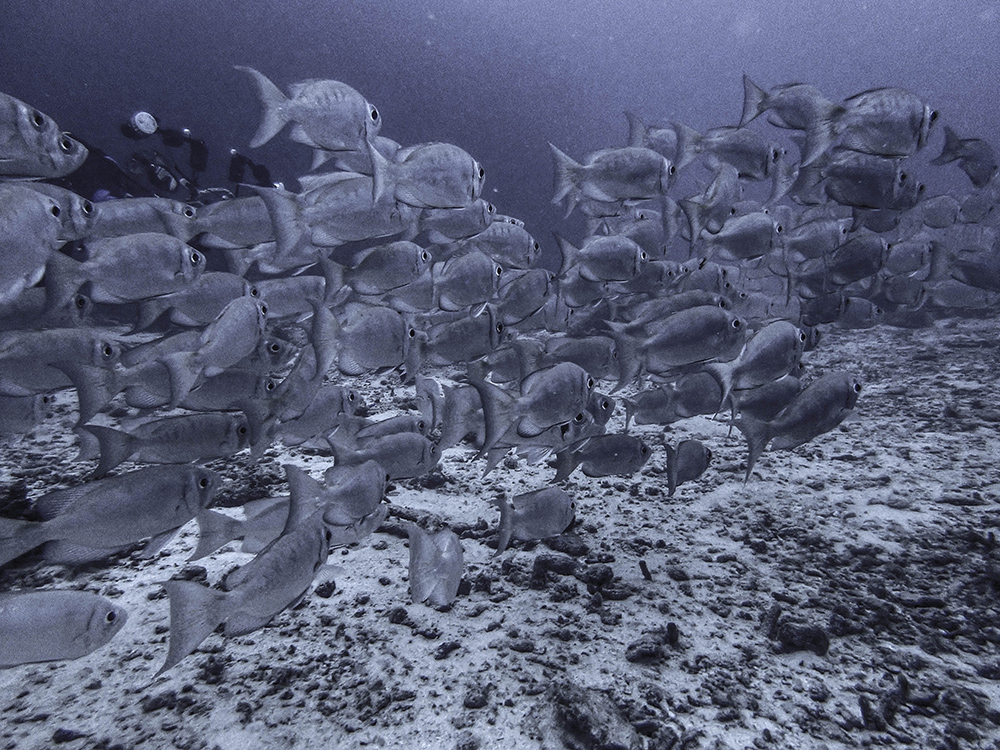 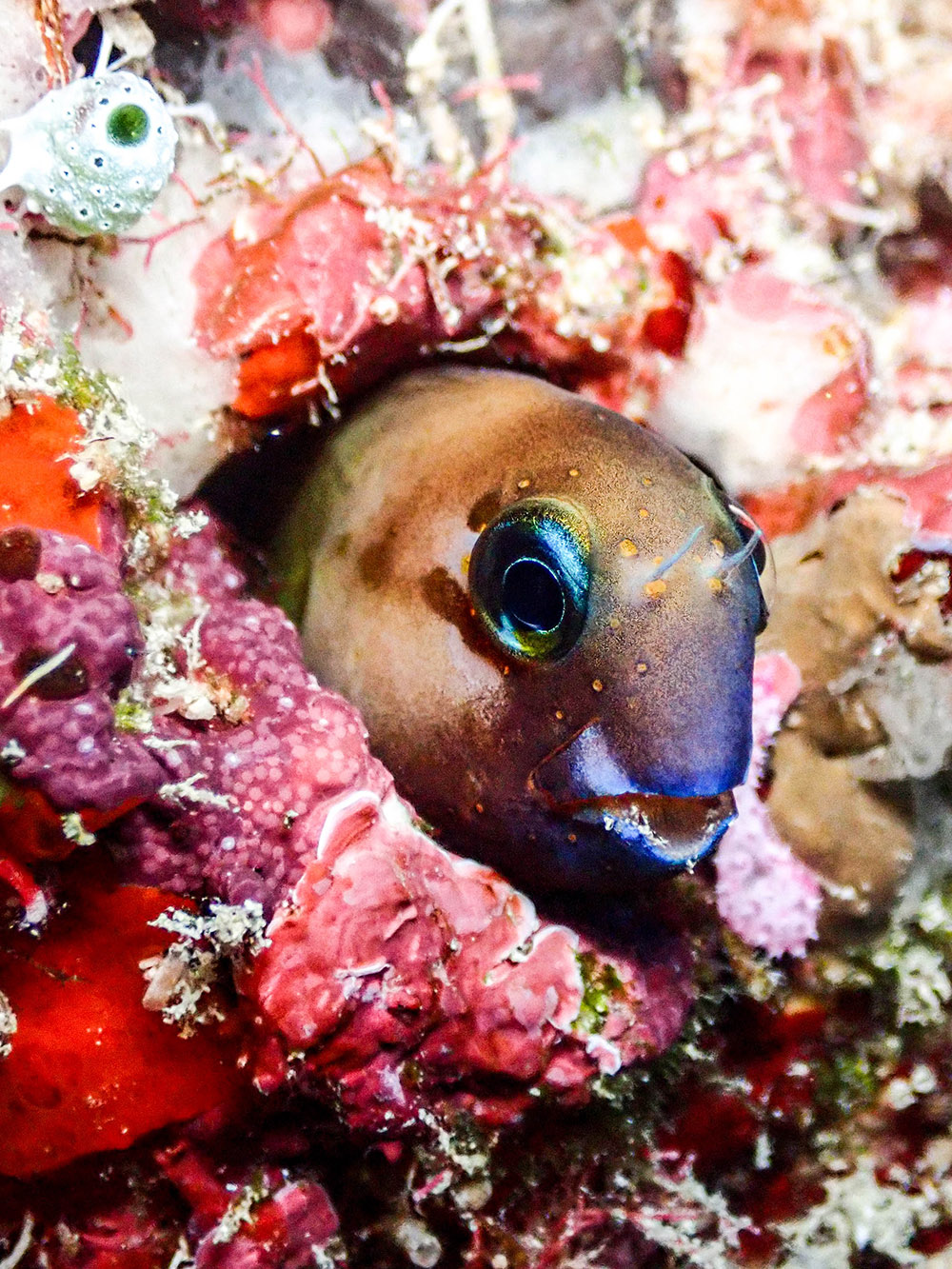 Photo by Bel: Top of Tetons II, one of many Blennies you can see there

As we are lucky people, the next day we got to do it all over again, and got again graced with 1 Pygmy Seahorse, some TwoTone (or Tutu) dartfish, Sharks and Tunas hunting (and perhaps considering Bel for a meal), schooling jacks and barracudas of every size… and that was just the morning! In the afternoon we saw yet more barracudas, Yellownose Shrimpgobies, Golden Mantis Shrimp, Zebra Dartfishand gorgeous reef tops, yet again.

The following morning we explored Wakaya’s beautiful wall and succeeded on Hammerhead sightings (5 in total) and Mantas (at least 3 individuals) either in passing or taking their sweet time on the cleaning stations. Other sightings included a Pavo’s Razorfish, Popcorn Shrimp, another Chromodoris kuniei, a juvenile Yellowtail Coris and, at the end of the 4th dive, a pod of Pilot Whales to bid us goodbye! Oh, Wakaya… 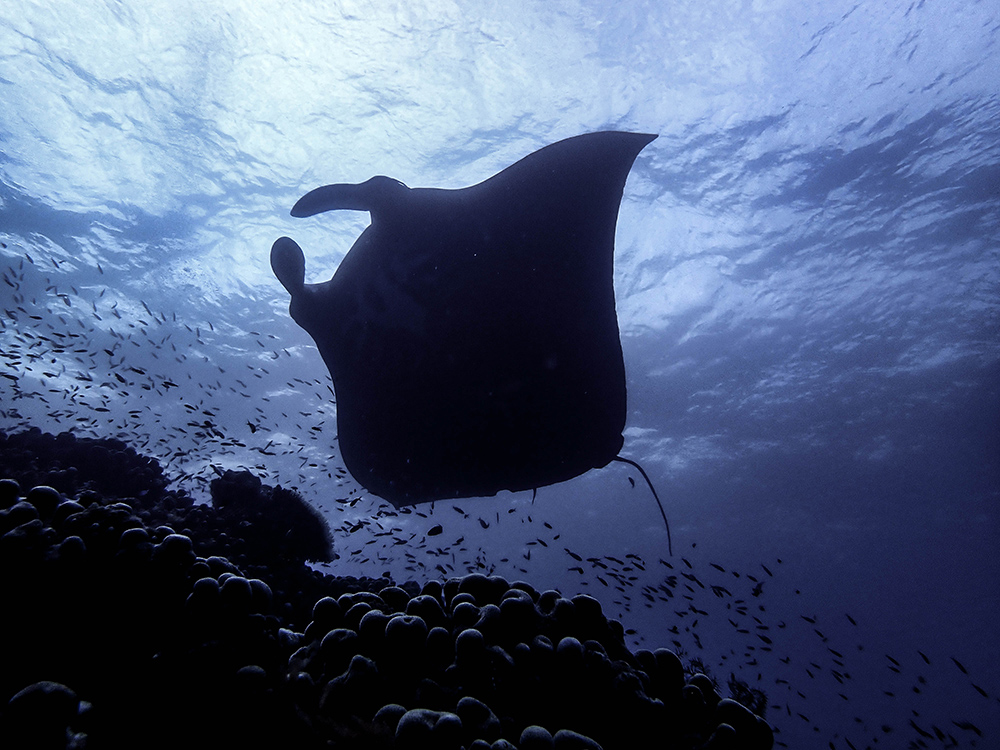 Photo by Bel: Snoot at Blue Ridge cleaning Station, her last reported sighting had been in 2013 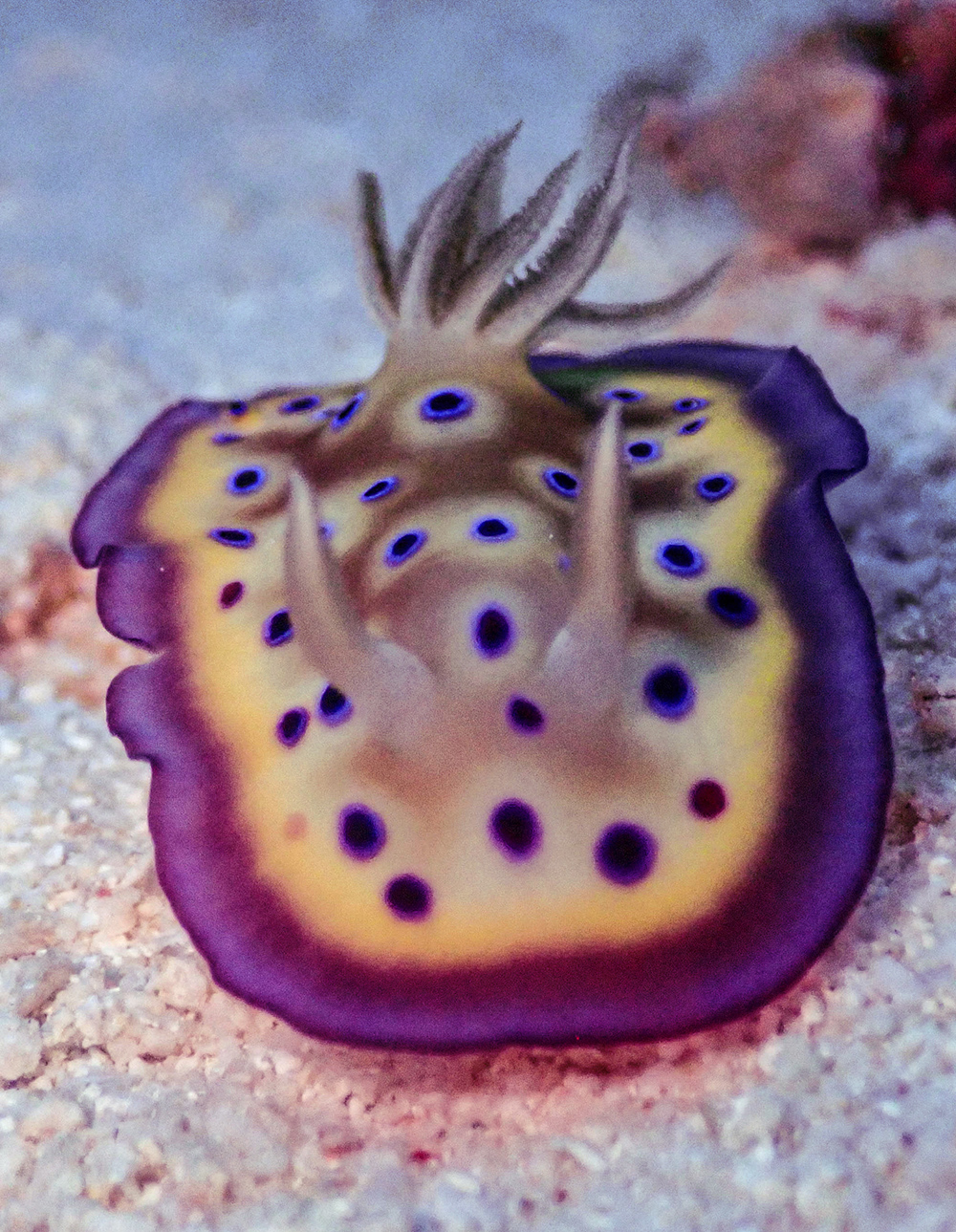 Photo by Bel: Chromodoris kuniei, or the Marilyn Monroe Nudi 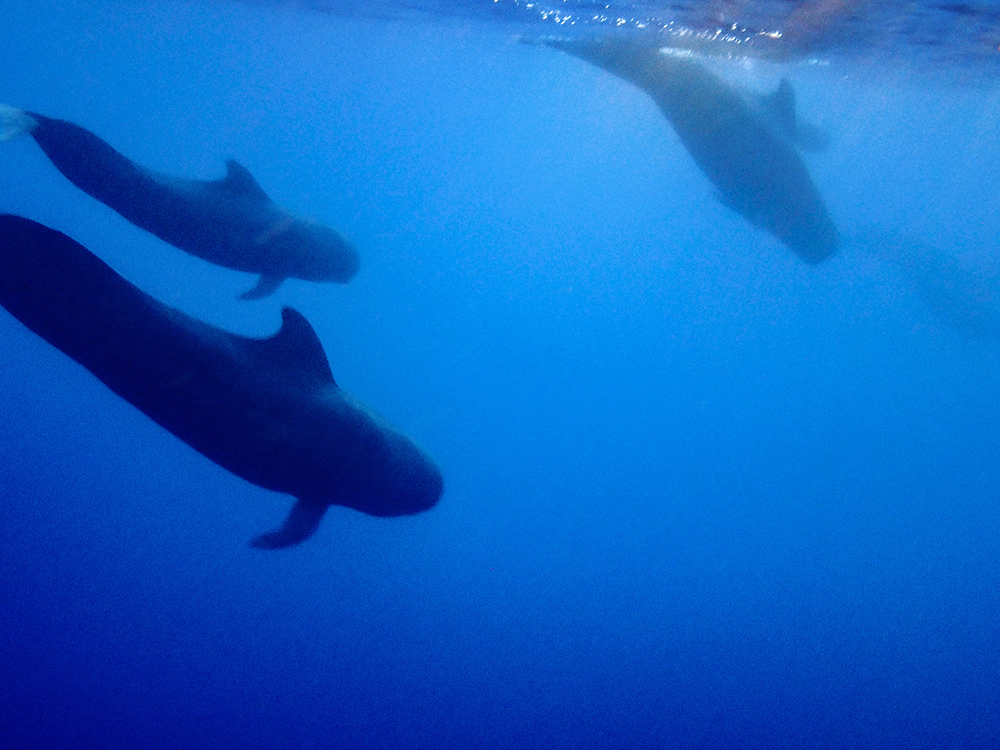 Photo by Bel: Pilot Whales, the perfect way to end the day!

The next day we arrived ready to explore Gau and it’s beautiful waters. We saw a few sharks, an infinity of barracudas, 2 great schools of Midnight Snappers and got showered in fusiliers. And that was just our Nigali dive! Then we also dived the beautiful Outer Reef, Jim’s and Anthias, and saw sea kraits, a turtle, a gazillion fire dartfish, splendid soft corals and two Schultz Pipefish… all in stunning visibility. Our village visit was a hit, the first one we have done with the being children there, since normally they are away at school. This certainly brought the visit to a new level. And Noel took the “You can’t over-bula” motto to a new level: When in doubt, just Bula! 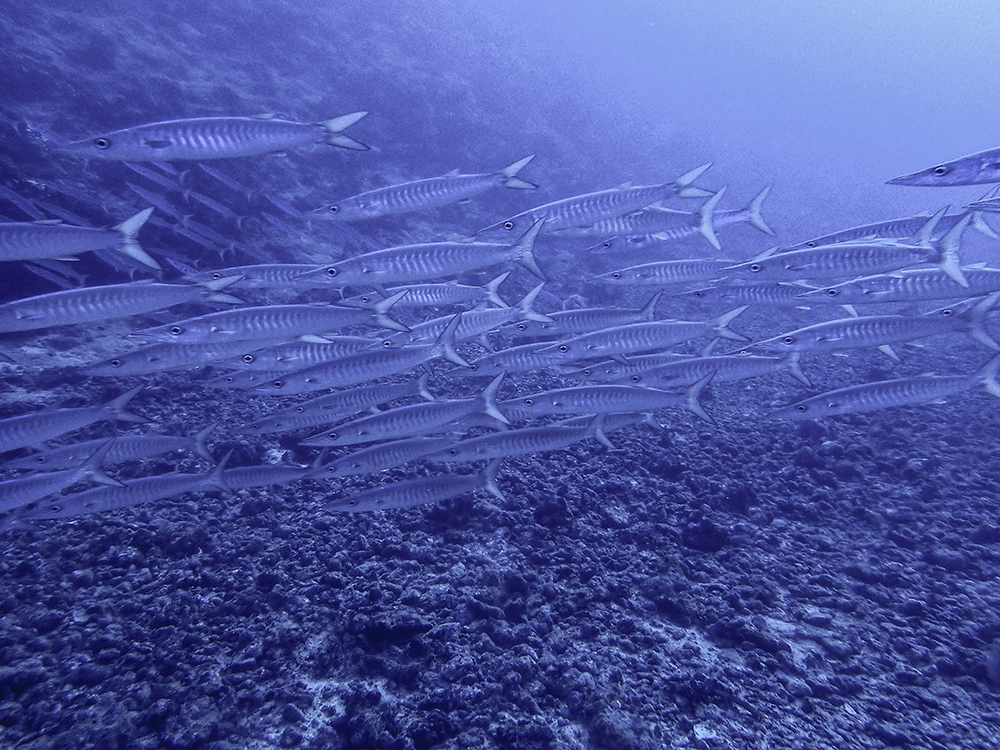 Photo by Bel: Endless barracudas at Nigali... the camera can only capture a few! 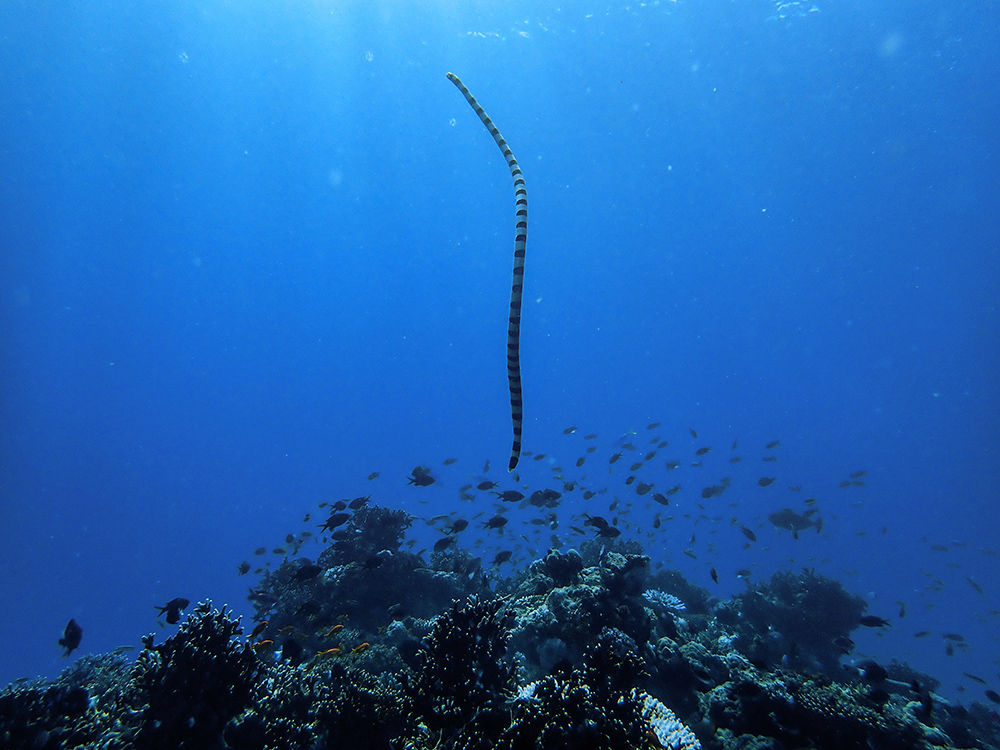 Photo by Bel: Banded Sea Krait at the top of Jim's Alley 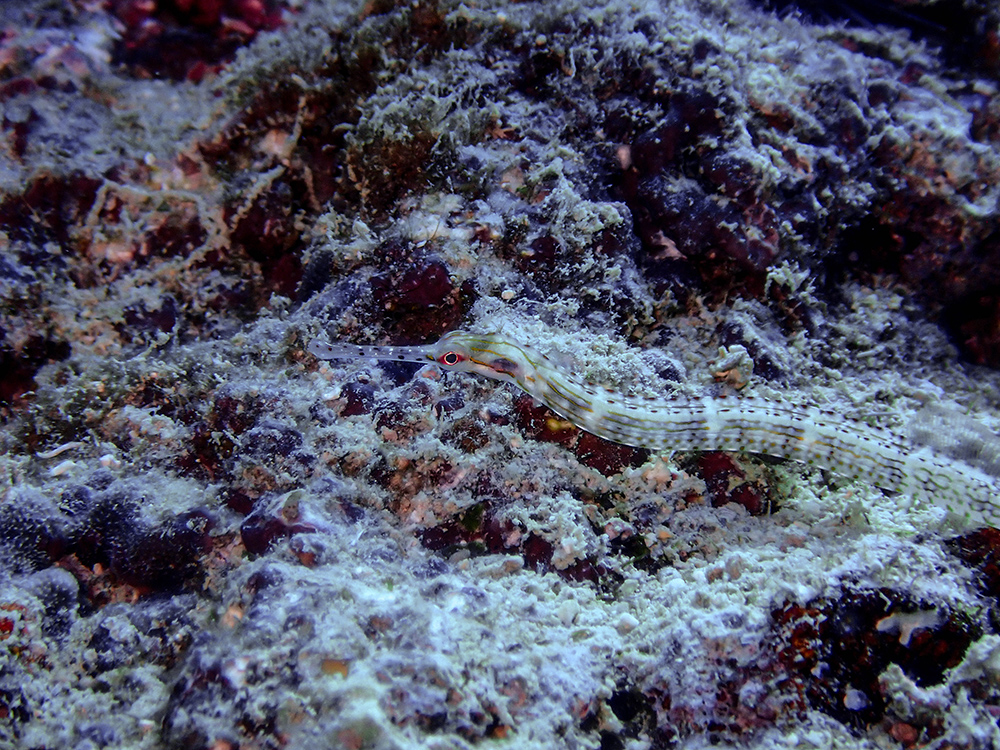 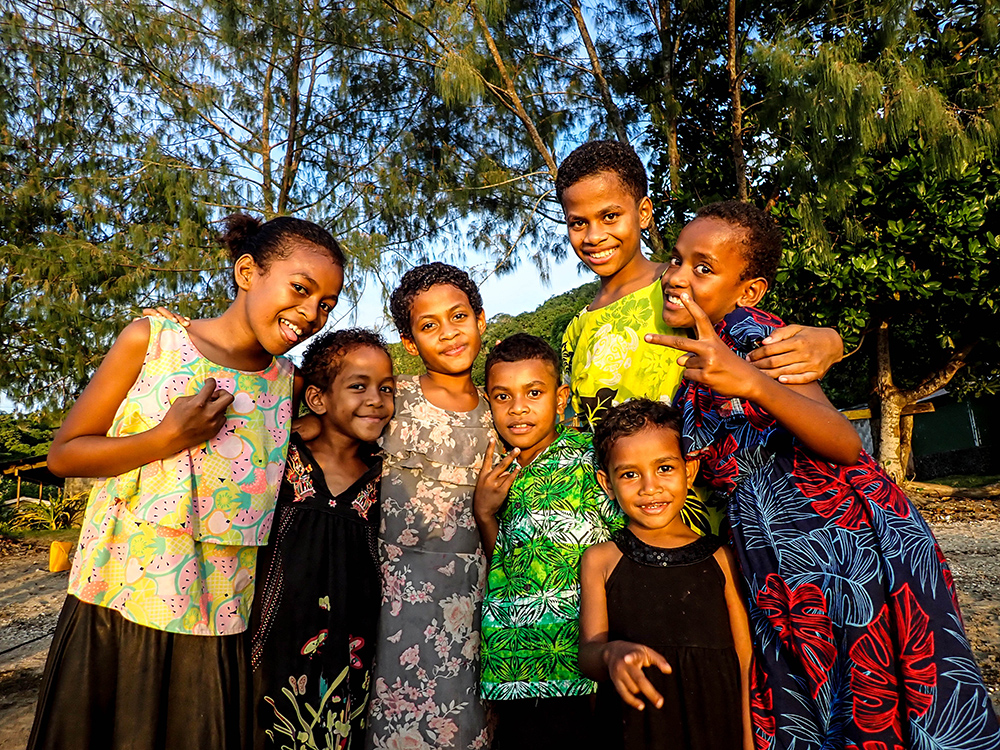 Then we headed back to Bligh Water and spent a day at the Sea Mounts, always a guaranteed hit! Dave said he “didn’t know there were still reefs that looked like that”. Quite the statement from such a travelled diver. It makes us feel even more fortunate to be here. The Rainbow Wall and Cathedral enchanted as they usually do, and we saw a few turtles, a few sharks, a few nudis, a couple of BIG Spanish Mackerels, 17 Tutu (or Two Tone) Dartfish and a couple of Spotted Eagle Rays… but the star of the show here really is the shallow reef. After a first attempt of a group photo, we had dinner and joined the Kava Party, one of the highest points of our trips. 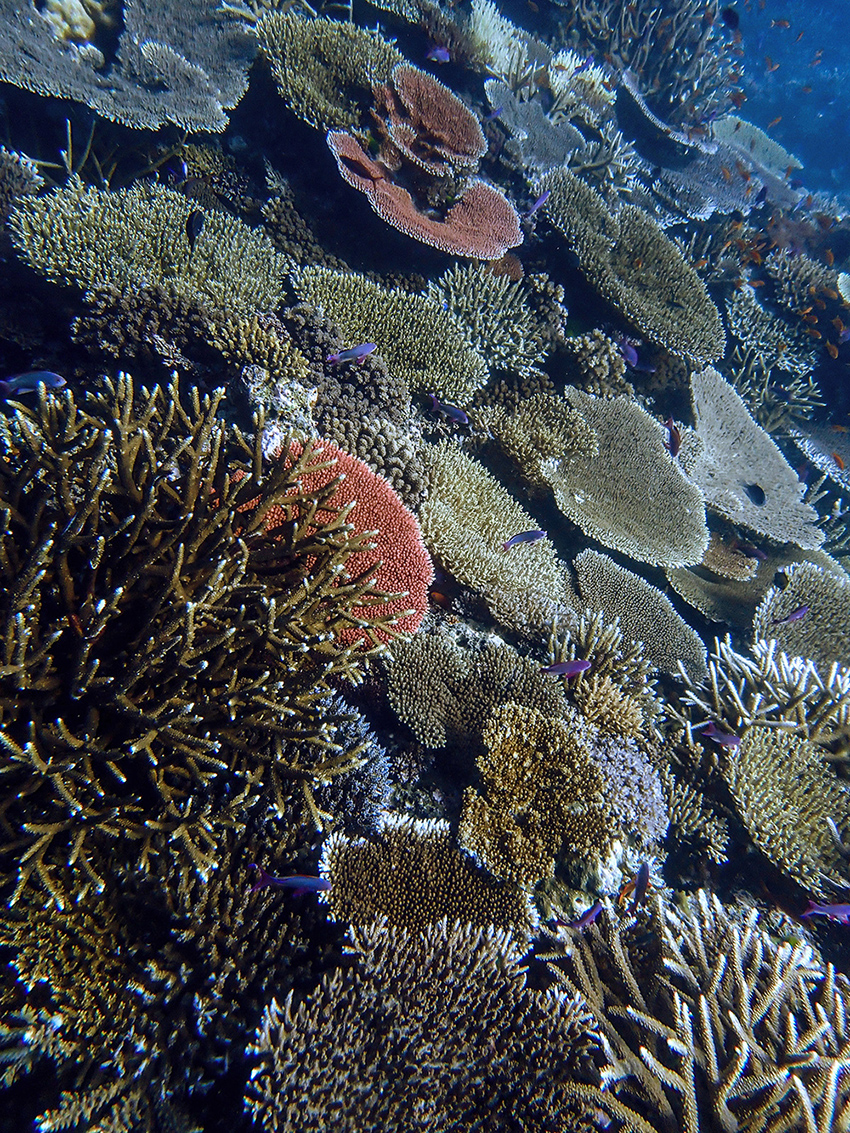 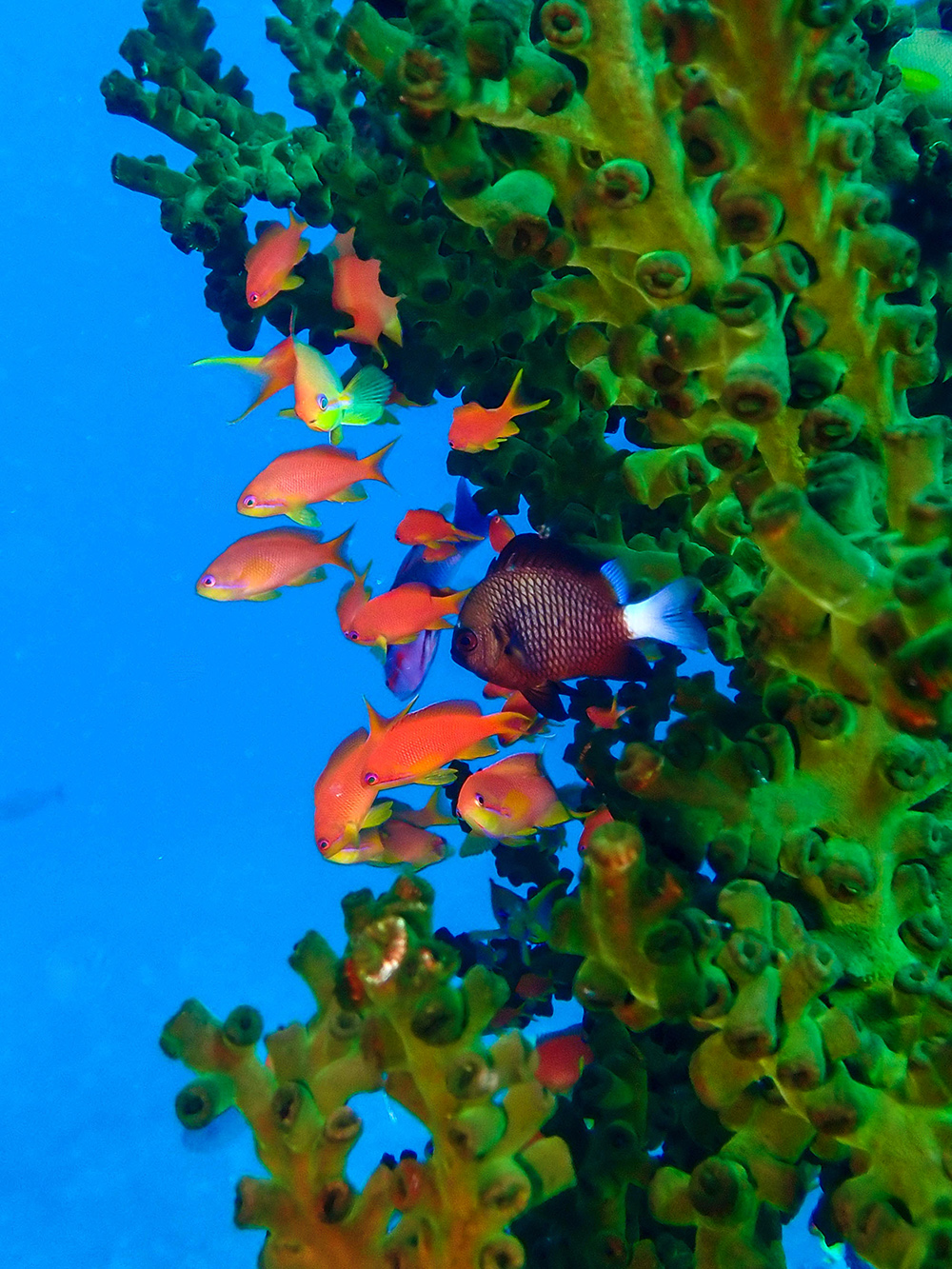 Our following day at Vatu-i-ra was unbelievable! GoMo with Zero current: unheard of. Charlie’s Garden with current: unheard of. But it’s OK, because the dives were fabulous with a ridiculous amount of fish coming for the nutrient rich water. Fish rained on us and the healthy reefs gleamed with the full sunshine we had all day. Is this really Fiji’s winter?? Bel found a Feather Shrimp and to end the day: Pilot Whales and Spinner dolphins together!!! I mean, could this group be any more spoiled?? 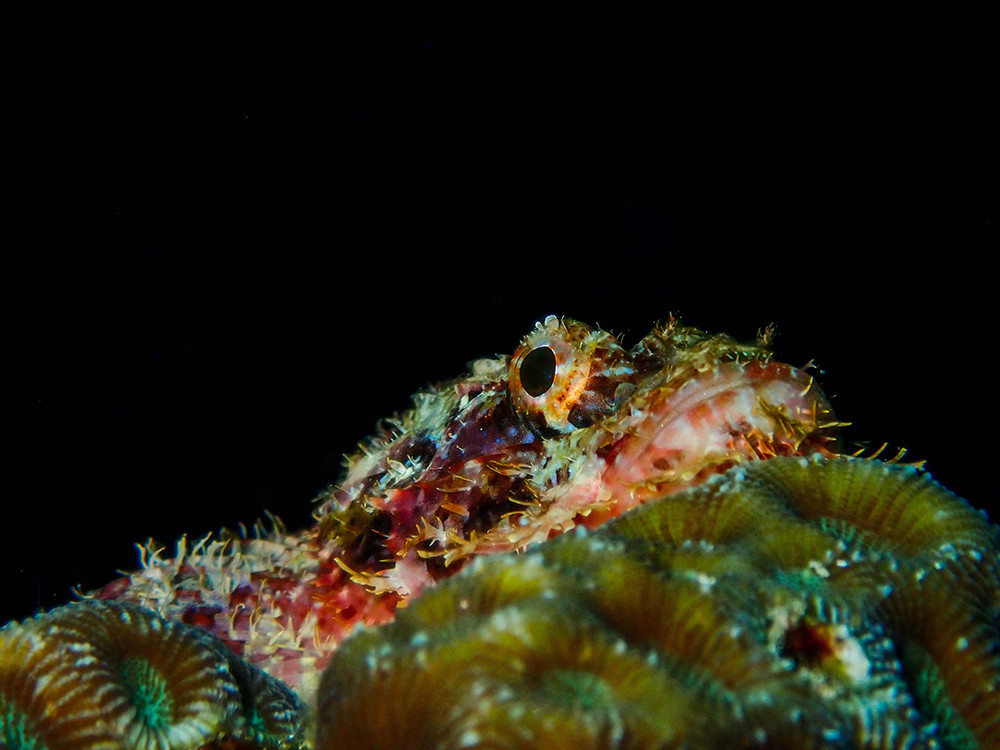 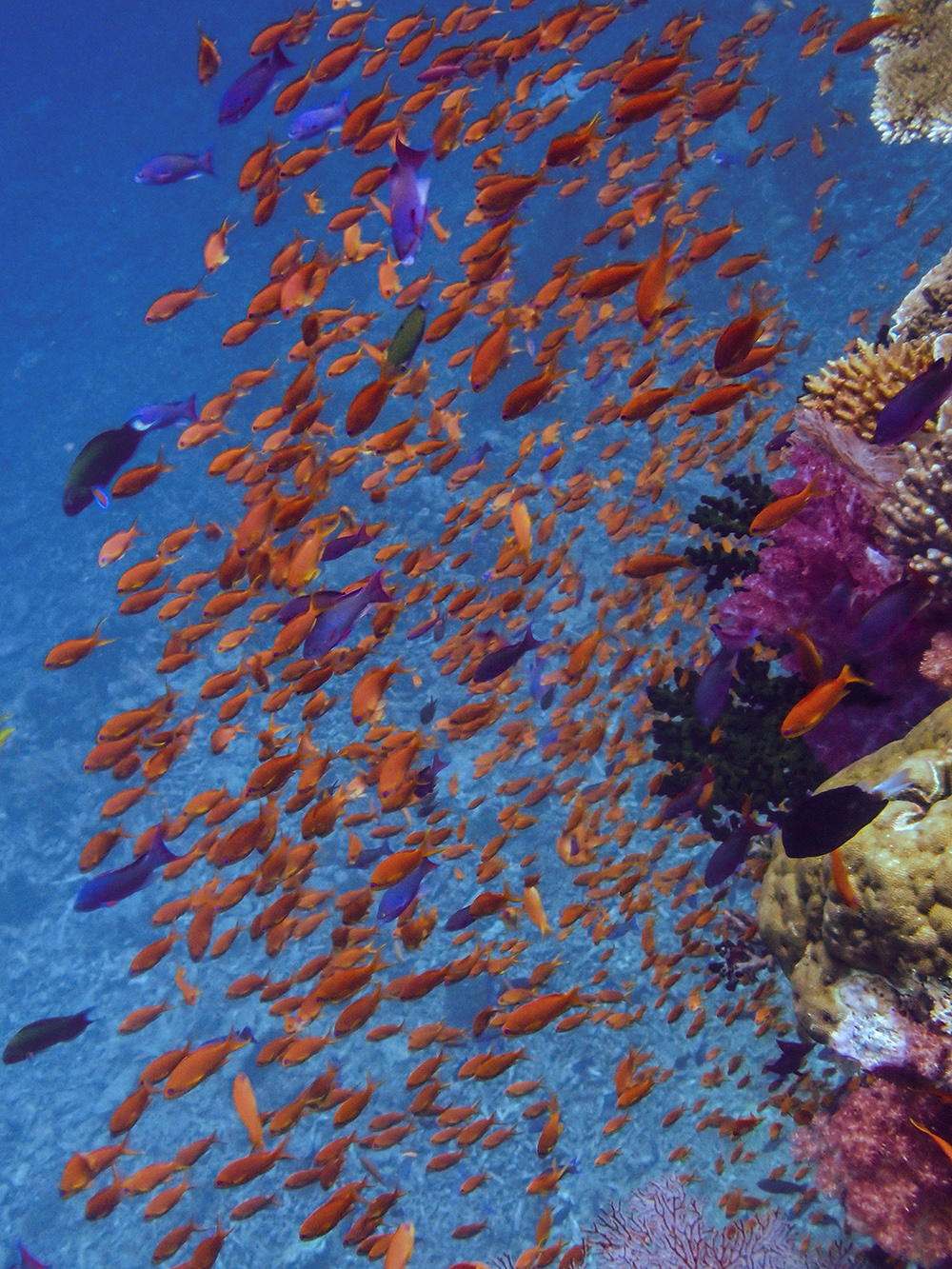 For our last day the Diving Gods aligned to offer a fabulous last day that started a little rainy but turned to be as sunny as the rest of the trip. We saw plenty of fish on the reef tops, moray eels, a turtle and, yet again, amazing corals and trevallies and sharks hunting all those yummy, yummy fish. This was a fantastic trip with an incredible group of people. We will miss the easy smiles and the worldwide dive stories. And we all learned one lesson in Emergency First Responding from Mike W, our physician on board, we will never forget: all bleeding stops. 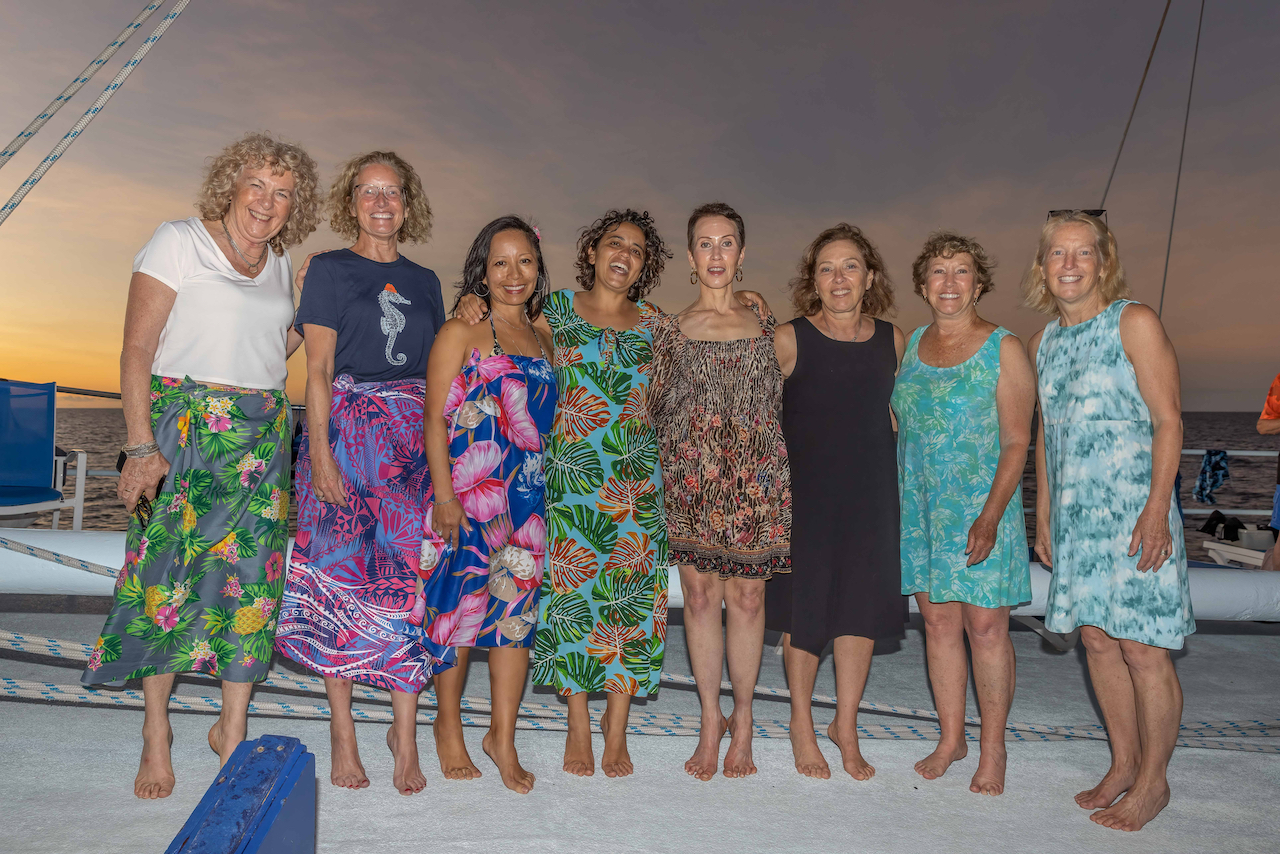 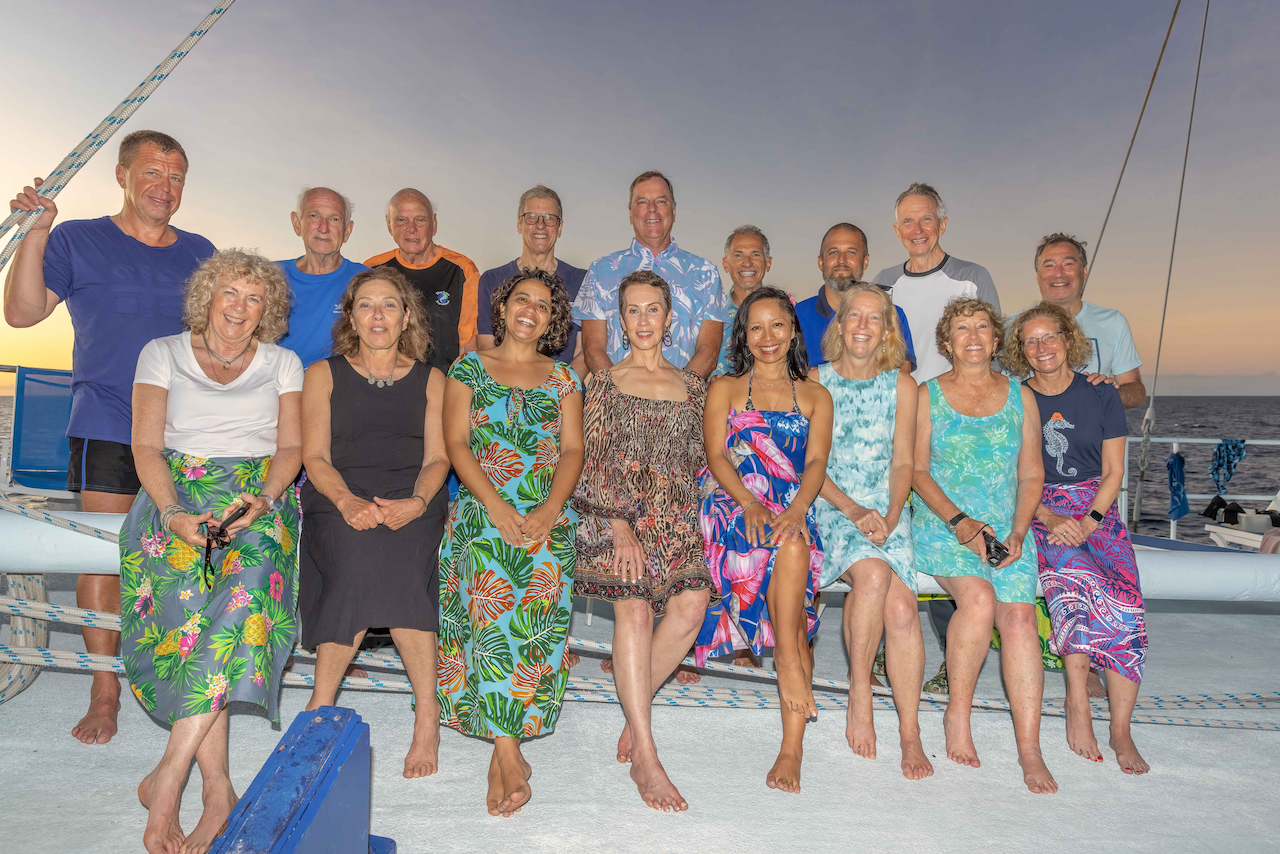