After our bumpy and sleepless crossing back to Nuku'alofa after the previous charter, it was with great pleasure that we woke up to sunshine and blue skies the following morning. This could only be a good sign. Arriving just a few hours later, our new group consisted of 7-time return guests, Bob and Doris, who this time had bought part of their charming family with them spanning three generations. They were joined by folks from Germany, Austria, Switzerland, China and a Mexican living in Australia, making this a very international charter.

The crossing that night and the scene we woke up to in Ha'apai was like a new world. Gone were the grey skies, rain and high seas of the previous ten days, we now had great weather, no clouds and little wind. But what did that mean for the whales?

Well, happily they were just as overjoyed with the change as we were. After driving around fruitlessly for an hour or so on the skiff our first morning, we finally had our first encounter. And then some! Our first candidates, two juveniles, were just as intrigued with us as we were with them, staying around for a massive hour and a half! We hastily told people who cried cold or hunger that this was incredible luck and that they should stay around since this surely was a one off... Or so we thought.

After finally allowing a quick pit stop for lunch we went straight back out and found a solo juvenile who treated us to an even closer and incredibly graceful dance for a long period in the afternoon. Although clearly awed by the whales, we're still not sure what impressed Wendy the most, the whales or the fact that Koroi could pull her out of the water and straight on to her feet in the skiff!

Meanwhile, those who opted to stay onboard were treated to many breaches including two whales breaching next to each other simultaneously. So great was the whale action that first day that everyone opted to continue whale watching in place of our regular afternoon scuba dive. Secretly hoping we hadn't peaked too early, we all ended the first day in the "whale playground" of Ha'apai feeling very satisfied and content.

With such a great start we couldn't possibly wish for our luck to hold – could we? With hope in our hearts, however, we set out searching for whales in the morning from NAI'A. It was another crystal clear morning, the only thing breaking up the blue being the white plume of steam rising from distant Tofua Volcano. To get a better view, Raphael and Dominik opted to spot whales from crow's nest, even though by his own admission, Dominik's knees were shaking at the very thought of the climb! Before long, a mother, calf and escort came close to the boat. We shadowed in the skiff, but just had fly-bys. This, followed by much of the same with a pair of skinny juveniles in afternoon, but no long encounters.

Feeling slightly under exercised meant we had a good turnout for our checkout dive at "The Patch", before anchoring for the night at the island of Uonukuhahaki. Now for those of us spoilt individuals used to diving the beautiful Bligh Waters, the diving in Tonga is not much in comparison. However, The Patch is definitely one of our better sites and offered up a nice gentle dive over a pretty hard coral reef, with a rare sighting of a grey reef shark, a pair of Glossodoris atromarginata nudibranchs and a turtle.

Amongst ten pretty spectacular days, Day 4 was extra special, as it fulfilled a lifelong dream for one of our guests. Underwater photographer and vocal conservationist, Raphael, said right from the start that, although this trip was expensive, the money in the end wouldn't matter, because animals give him so much more than money ever could. His dream was to witness the close relationship firsthand between a humpback whale and her calf. So, as the sun burned away the slightly overcast morning, we set out in the skiffs the along the line of the islands, to search for something that might make the dream a reality. And boy did we strike gold.

Near Uiha Island we found a mother, calf and escort who, after they realized we weren't a threat, let us get extremely close. Turns out the 2-ton baby humpback was the one calling the shots here. By now everyone had recognized the wisdom of staying in a close-knit group and "hanging like jellyfish" to encourage the whales closer, but this baby needed no encouragement. He seemed to look us all straight in the eye and then barrel up towards us, before showing us all sorts of tricks including rolling over, pec slapping and more than once actually swimming straight through the middle of us! Renate, Miguel & Juergen actually found themselves having to swim out of the way while Amanda actually got "brushed" by the tail fin... (it's actually quite hard by the way!). All while mum and escort sat just metres below us keeping a careful eye on the scene.

When mum decided it was time to go and led her baby away, we finally came up for air. Looking to Raphael for his reaction I found him so moved, that he was literally unable to speak for at least ten minutes. He just sat there shaking his head in wonder. Stunned.

Who knows if what followed was a lesson for the baby, a show for us to say "thanks for babysitting" or just a pure expression of joy, but we were then treated to quite a display. There were many breaches close to the skiff by the baby and the adults, including many simultaneous breaches, head lunges by mother, and tail slaps by escort. We were so close to the whales and downwind that we could actually smell them! If nothing else, this was a lesson in where not to be. We were able to clearly see the fluke markings of the escort. This was the second or third whale this season that we've seen to have a darker fluke, distinguishing him or herself from the local norm of bright white with a thin black outline. Hopefully this means that the gene pool is finally growing, allowing our Tongan whale population to expand healthily. 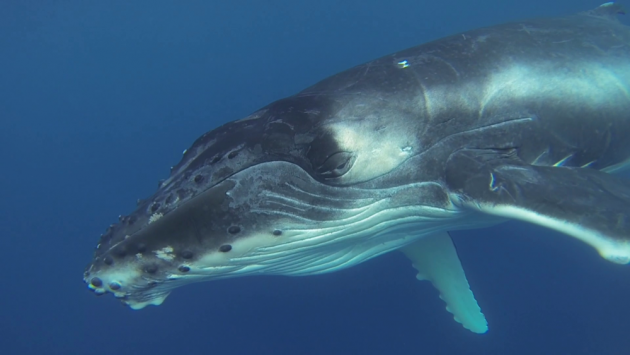 Here's looking at you - by Dominik 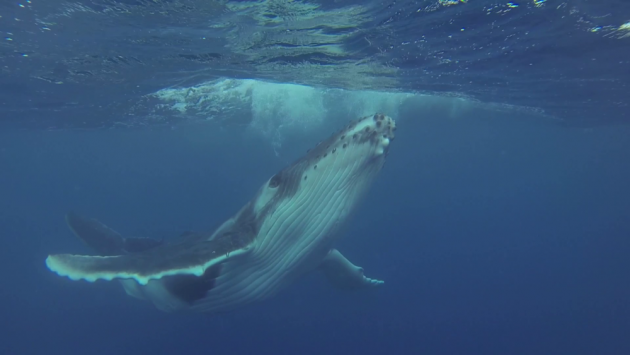 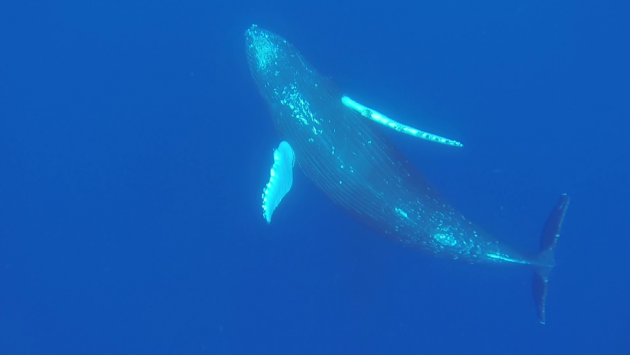 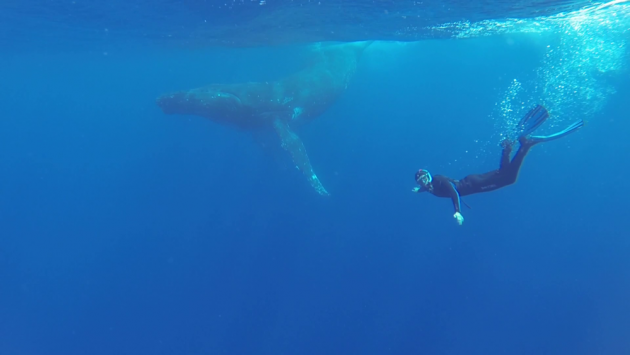 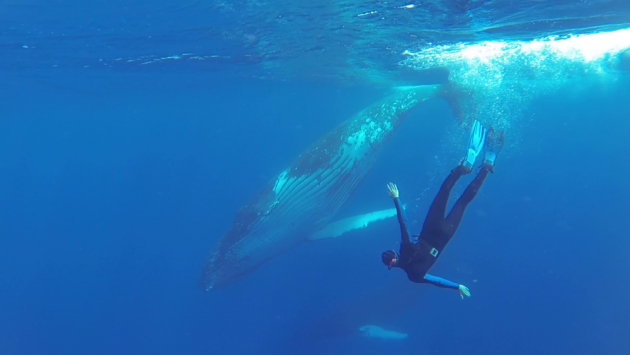 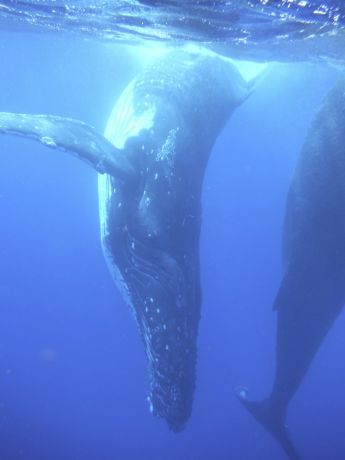 Top and tail - by "The Family" 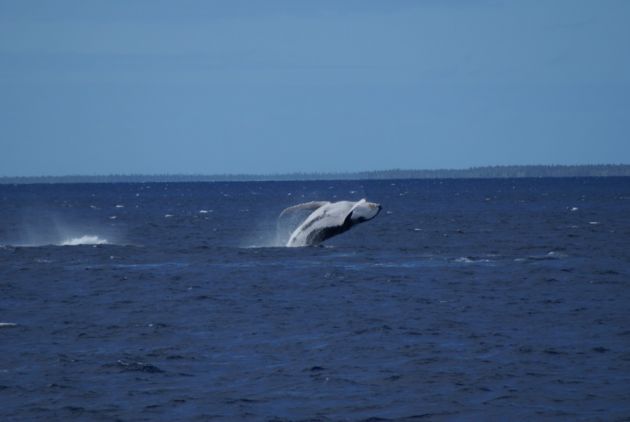 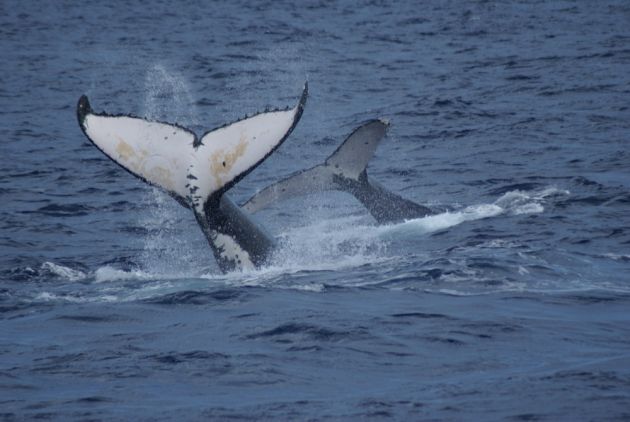 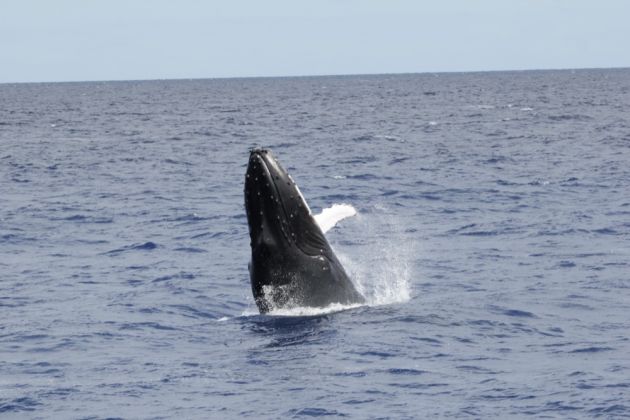 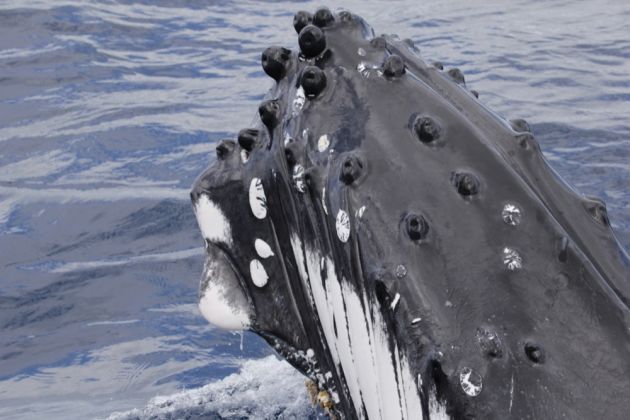 My look at those tubercles - by Ulli 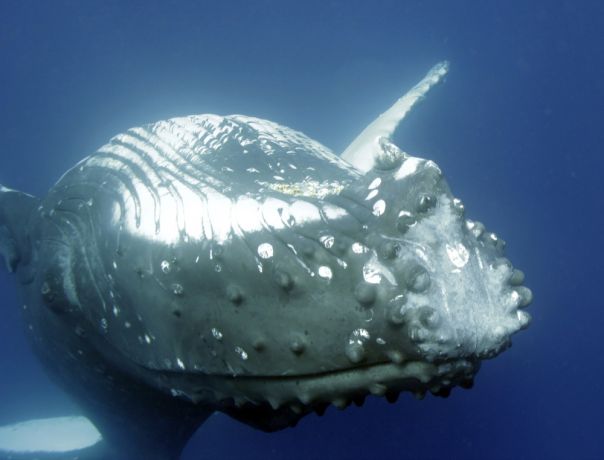 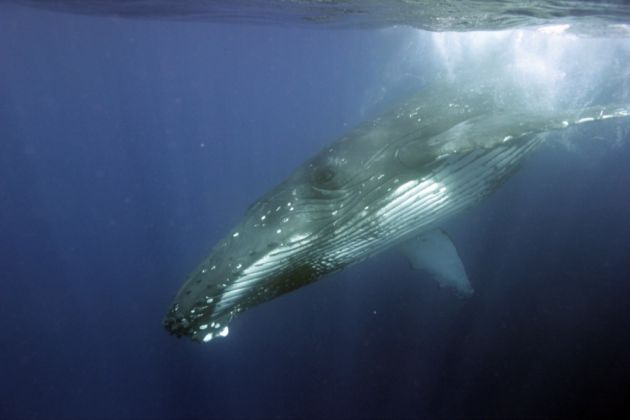 Sunshine AND whales? Stop it it's too much! - by Ulli 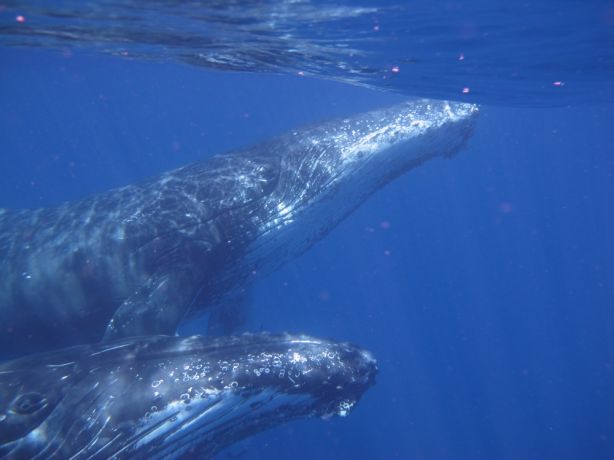 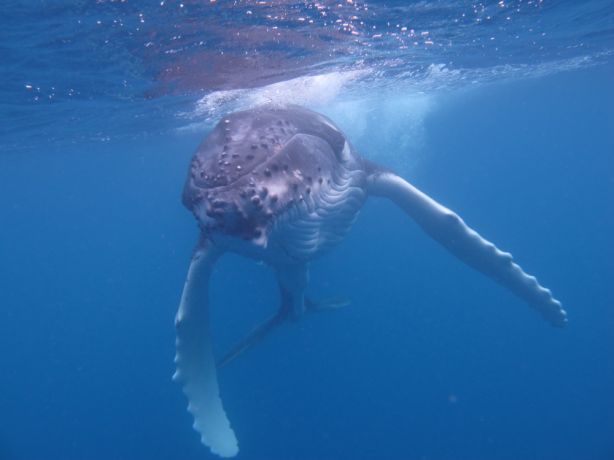 Our playful 2 ton baby - by Uwe 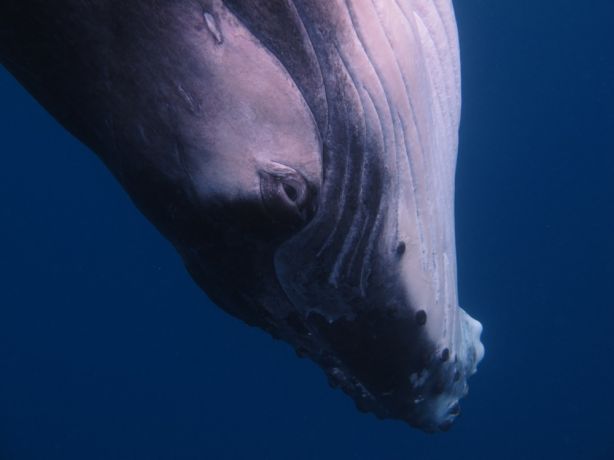 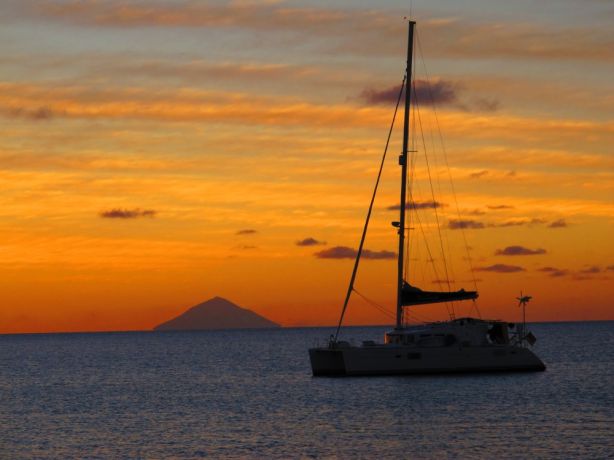 Sunset over NAI'A - by Uwe 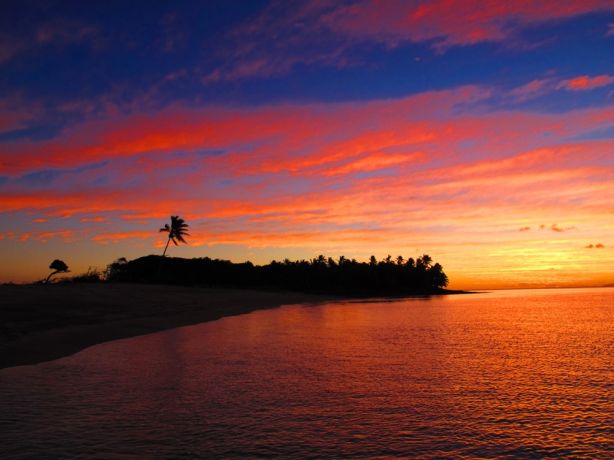 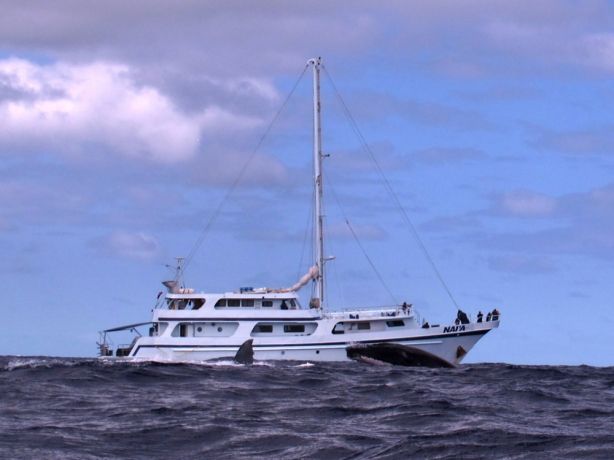 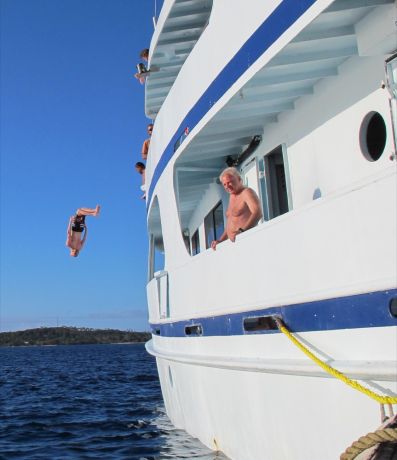 Dominik walking the plank - by Uwe 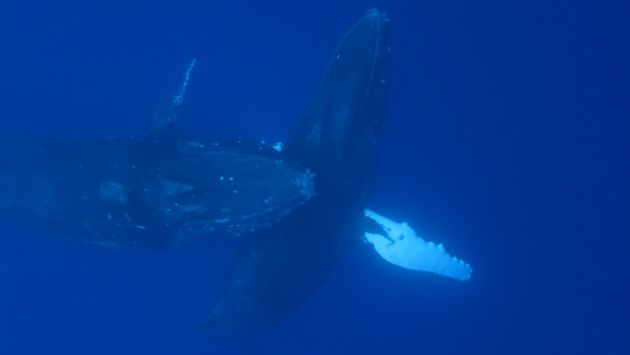 The whole experience left everyone elated, including Mario, who said nothing, just sat there blinking and beaming from ear to ear all the way back to NAI'A! That night we anchored near the island of Uonukuhahaki where we went diving and/or for a sunset beach walk. The perfect end to a perfect day.

Day 5 treated us to more inquisitive juveniles showing very close and intimate behavior. We observed one pair clearly "having a moment" – nuzzling calmly below us, very still, when we noticed a sudden change in vibe as another pair approached at speed, one of which clearly rammed one of our pair and chased them off! At this moment we were alerted to cries from the skiff off mahi-mahi!! We turned just in time to see a striking young female mahi-mahi (also known as dolphinfish or dorado) swimming by us at the surface.

Not to be left out, a pod of bottlenose dolphins appeared out of nowhere. At first, we could only see the dorsal fin of one, which we assumed to be a baby humpback whale... until 12 more appeared. Unfortunately, we didn't see the dolphins while in the water (apparently, like us, they were more interested in the whales than in us), but watching everybody swim around chaotically was at least good for a laugh.

The following day, after an unproductive skiff search from the surface where we didn't even get wet, we started to think that our tremendous luck had run out. So we organized a lovely dive watching hungry dogtooth tuna chasing enormous schools of fusiliers at Palako's Patch and had lunch. Then, out of nowhere, the whales that we'd been combing the ocean for all morning came to us. Three very inquisitive whales approached NAI'A with the sole intention of showing us their very best moves. What ensued was the kind of fantastic surface display for which humpbacks are famous. Spyhopping two or three at a time right next to the boat, they received great applause and cheering from all onboard, which perhaps served to encourage them. This was followed by pec slapping, twisting and turning just below the surface and tail slaps. These guys were show offs! All the guests and all the crew were either leaning over the side or jumping directly from NAI'A into the water with them. Those on deck got sprayed with a continuous wave of whale spray; Cristina even saw a rainbow in it. Now, "I saw a rainbow in the whale snot" is not something many other kids at your school will be able to claim they saw on vacation! That night, six villagers from Uoleva came aboard to sing with crew giving us a unique Tongan Fijian mix.

The last three days were filled with various short encounters and fly-bys. With so many great encounters earlier on in the week, many were happy to take it easy, opting to take the afternoon off completely and spend time on land. We dropped people off at various uninhabited islands to spend some time exploring, snorkeling from the beach or just lolling about on the sand. Turns out one of these islands, Nukulei (translated to "Sand Garland"), wasn't quite as uninhabited as we had thought when guests came back telling of the unexpected sea snake nest "discovered" just steps away from the beach! Others opted to stay on NAI'A and engage in some stiff Scrabble competition with 12-year-old Ale proving he was a force to be reckoned with!

And so, with many happy memories already in the bank, we travelled overnight back to Tongatapu to spend the last day whale watching in this area close to home. Here, our guests were rewarded with several great, last minute encounters, while those who decided to stay onboard watched breaches and dozens of tail slaps and peduncle throws. This served as the perfect farewell to an already incredibly lucky charter.

The first time you look a whale in the eye is something you will remember for the rest of your life. While the first one will always be special, every subsequent encounter is amazing and every time one gets close to you, it's so bewitching you have to remember to breathe. That's all we can hope to offer on these trips: encounters for you to keep in your mind forever. That's why we come here year after year, that's why we spend the hours standing out on deck in the sun and the rain looking endlessly into the water so that we might get just a moment with these wonderful animals.

Is it worth it? I'm pretty sure that you'll get the same answer from all who join us: every time!

Our 7th trip on NAI’A, 4th whale trip in Tonga. Still one of the best liveaboards out there! Wonderful crew, Captain and Cruise Directors. If our old age can handle it, we’ll be back!

We’ve heard from Bob & Doris for many years about the fabulous NAI’A… now we’ve experienced it for ourselves. It’s everything they said, and more. Many thanks for the fantastic experiences and especially for accommodating 3 generations so graciously. 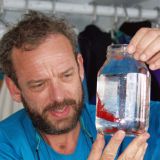