In these newly uncertain times, we were fortunate enough to escape for a week to immerse ourselves in nature and the beauty of Fiji’s stunning underwater world.

After our check out dive we headed off overnight to our first stop Vuya, ready to spend the morning diving Humann Nature and Cat’s Meow. Cat’s tall pinnacle didn’t disappoint with our friendly pontoh’s pygmys still sitting on their shelf, lots of blue dragon nudibranchs and soooo many fish! Humann Nature had its fair share of blue dragons, plus some tiny tiny nudis hiding out in the rubble! The current had picked up on the second dives of the day which puffed up those soft corals at Cat’s and got the thousands of anthias and fusiliers excited at the top of Humann Nature. Meanwhile Bernadette was hanging out for twenty minutes with a turtle during her snorkel! 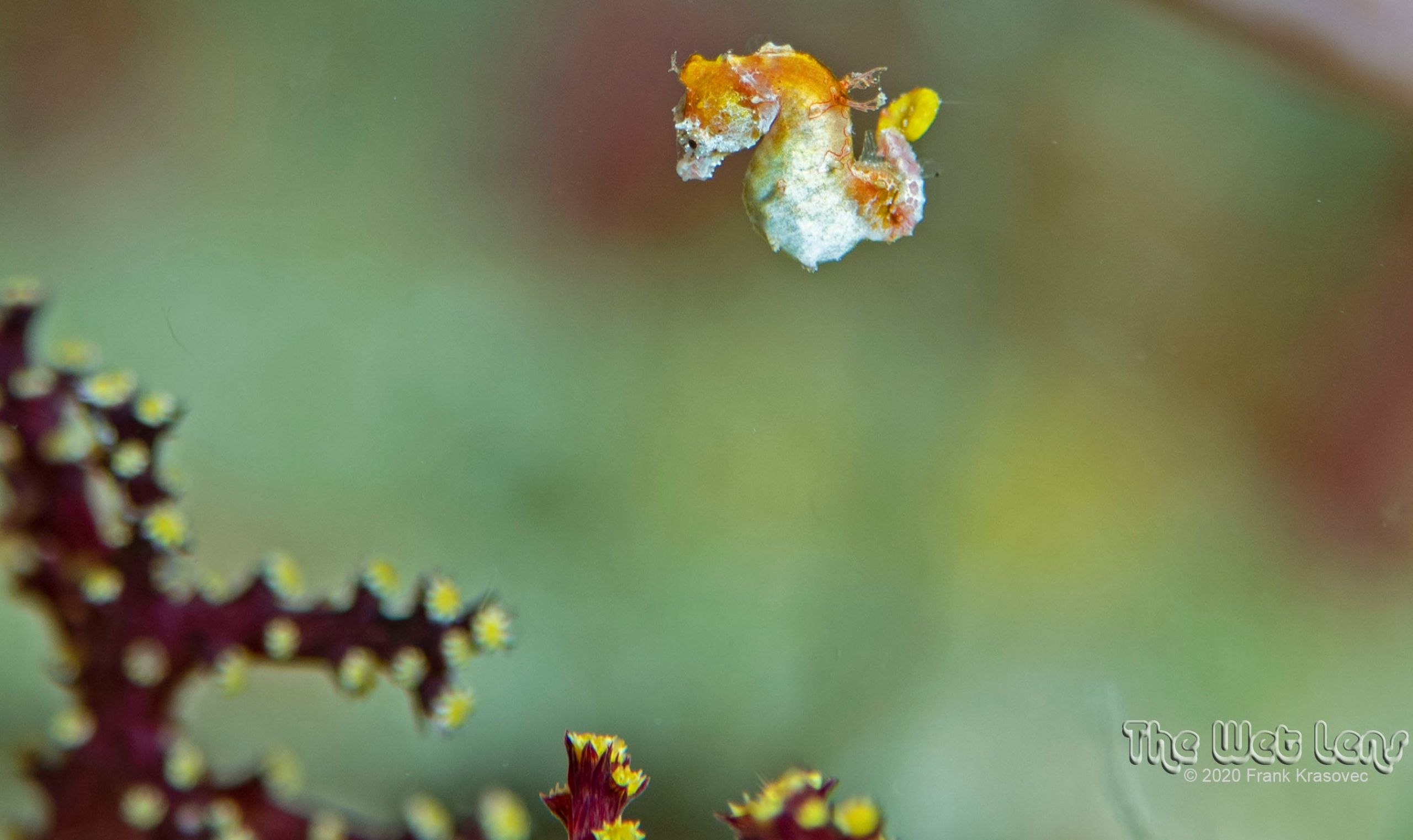 After lunch we moved along to the UndeNAI’Able region to dive the Pinnacle and Main Reef. At the main reef we cruised along the wall and weaved in and out of the channels framed with soft coral. At Pinnacle we worked our way around up the reef and through the beautiful sea fan lined swim throughs. More tiny nudis…just for Ricks wide angle…oops, an inquisitive Fiji fangblennie (Rogers face was priceless as I tried to signal a fangblennie), a giant clam, MORE blue dragons, big schools of lunar and ruddy fusiliers and Sarah even saw a huge spotted eagle ray fly by!

The next day we awoke in Namena to spend the next two days in this beautiful marine protected area. We started the day at The Arch and Kansas where the current had decided to do its own thing and so we got to see these sites in different conditions. At The Arch Big Mo explored the reef formations and found a flame hawkfish, over at Kansas we found flabellinas and various pipefish species and enjoyed the sinularia soft corals. The current had attracted lunar fusiliers, unicornfish and a HUGE school of blue and yellow fusiliers. Alison and Sarah were flags holding onto the post on the top, Dan and Linnea hooked on with their reef hooks, and Matt looked on in envy as he had to kick into the current. 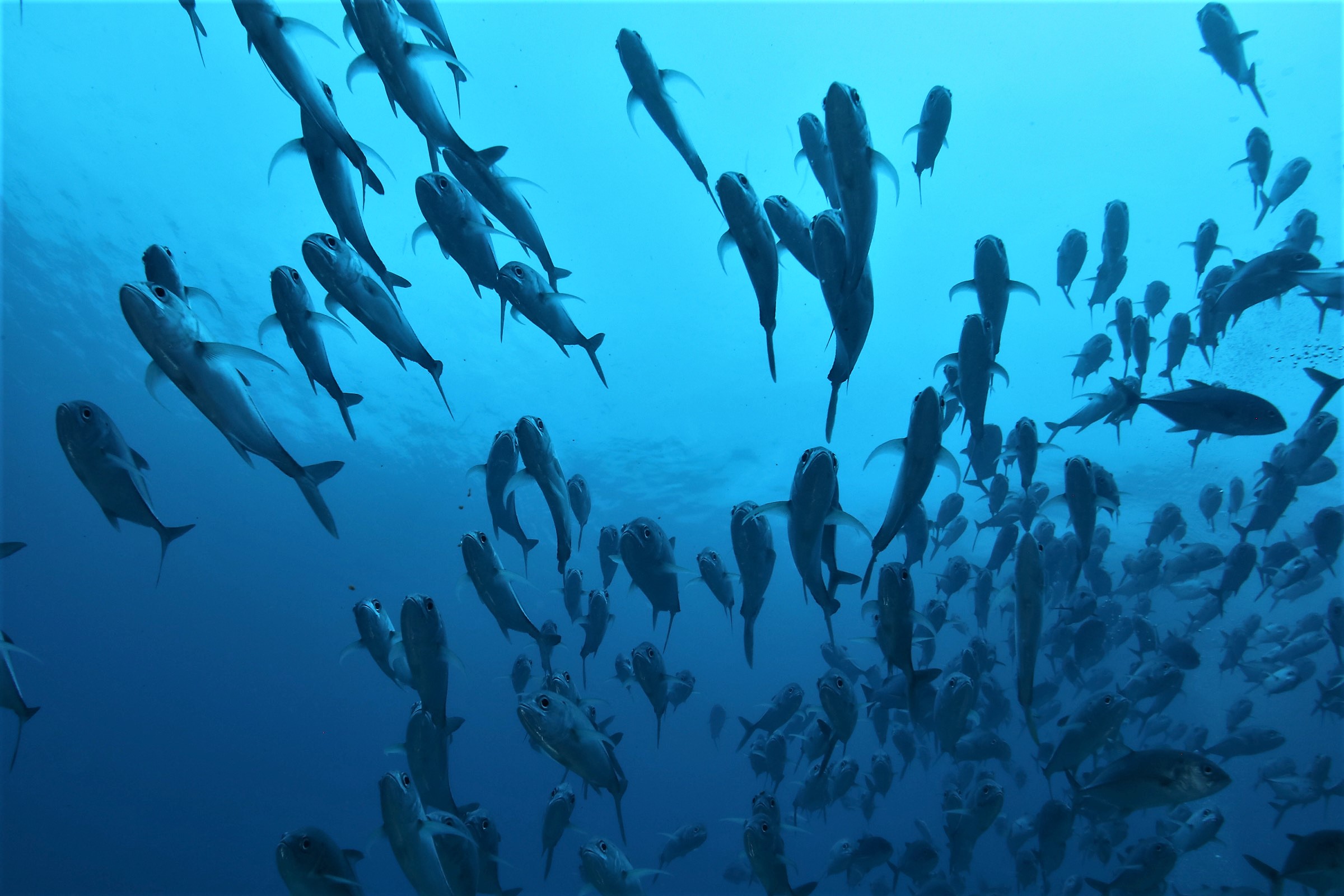 That afternoon we moved to the South side of Namena to Dive Tetons 1 and 2. The tall thin Teton 1 was as spectacular as ever with the scalefin and magenta slender anthias teeming all the way up. Nils was in his element with perfect light to take some great shots. Down at the bottom Laura found an unidentified big fat nudibranch and Clare found her pipefish! Over at Tetons 2 were golden mantis, shrimpgobies plus shrimp buddy, tiny dragonettes, and a ton of pipefish! Meanwhile Bernadette spent her snorkel attracting the sharks!

We sheltered from the wind in the bay of Namena Lala Island and enjoyed our Kava Party with the crew, singing traditional Fijian songs over a full tanoa. I believe Laura was the last one standing with the boys and the bilos! 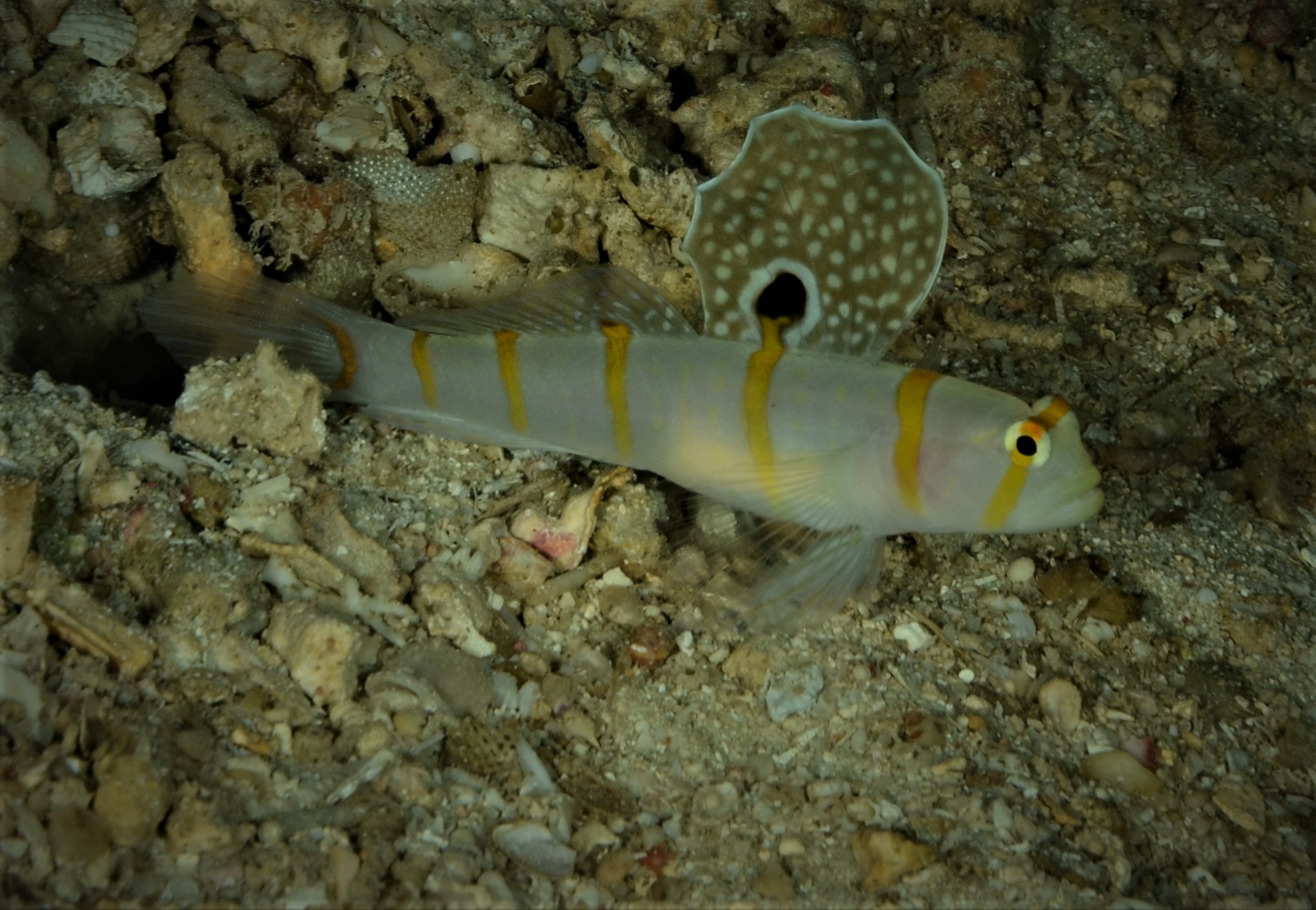 We started South of Namena the following morning diving Two Thumbs Up and Tetons 3. We found the super shy blue ribbon eels down at the bottom of Tetons 3, along with the beautiful decorator dartfish. We had fun spotting shrimps and nudis as we circled the deeper pinnacles and shallowed up on the main one to spend some time in the Fiji anemonefish village! At Two Thumbs Up the current was pumping up the beautiful deep purple and red soft corals and attracting so much life! We even spotted the leaf scorpion fish on top of his pinnacle and Linnea hung out with him during her safety stop watching him open and close his mouth! 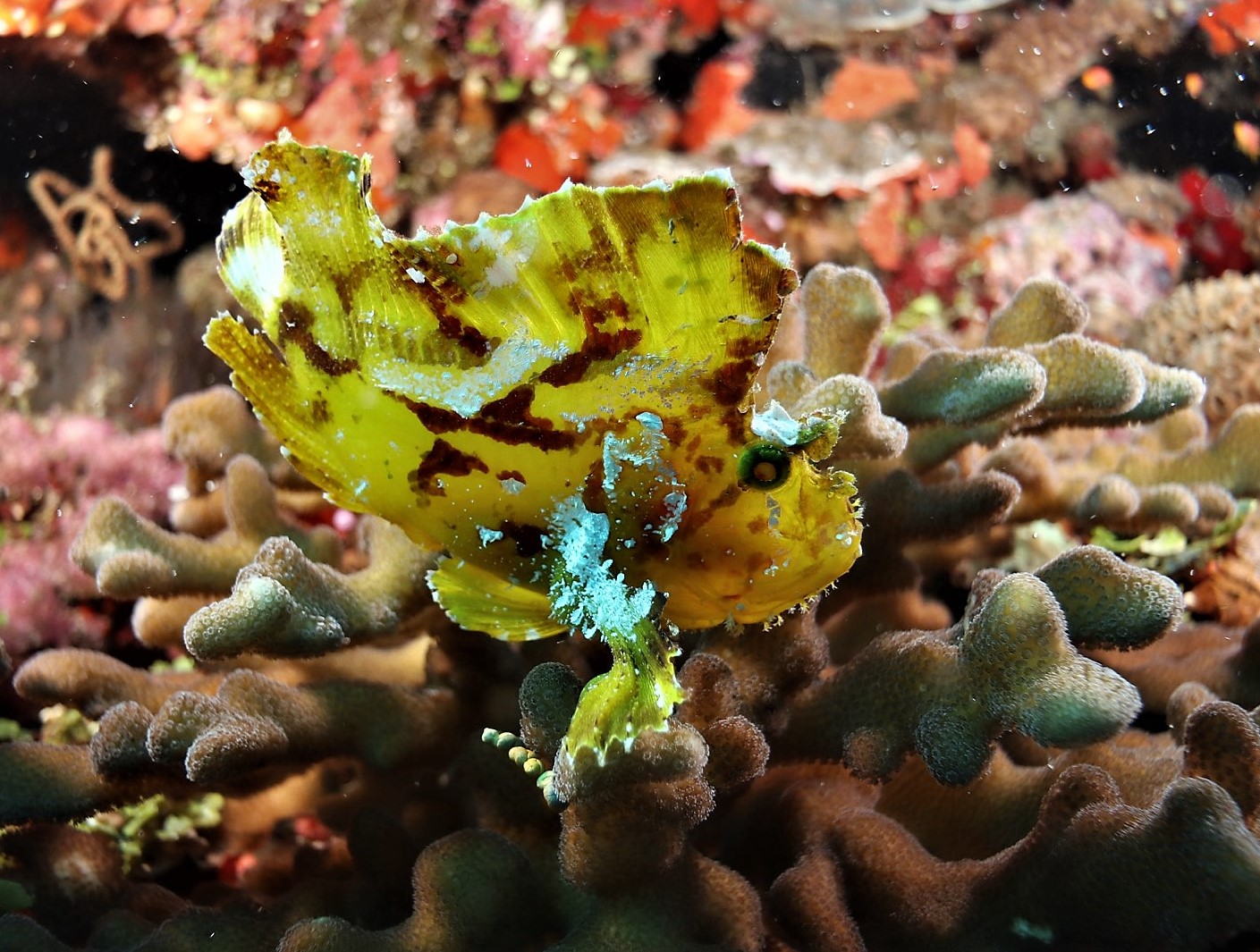 Next dives we were back at the North of Namena for Grand Central Station and Kansas. The current was still not behaving but we still had great dives. At Kansas Alison and I spent the last half of our dive in Alison’s happy place, on the top with the soft coral and played with the yellow and blue fusiliers by swimming into the current between them all and watching them as they swam down and surrounded us catching the light and coming super close! Such an amazing experience. Matt joined for a bit to spot the grey reef shark, then Dan joined us at the end and we watched the bignose unicornfish mating and a napoleon wrasse swim by.

As the tide was doing its own thing and decided not to turn at all we moved back to the South of Namena to dive Two Thumbs up and Tetons 3, surfacing to two very damp skiff drivers who had been waiting above us through a rain storm! We kept an eye on the weather which calmed down ready for those hardy divers (Roger, Amy, Dan Linnea and Matt) keen for a 4th dive to head to Mushrooms. That night Big Mo led the night dive in the bay of Namena and found not only a hairy ghost pipefish…but eight (!!!!!!) rumengani thread pipehorses!!!! 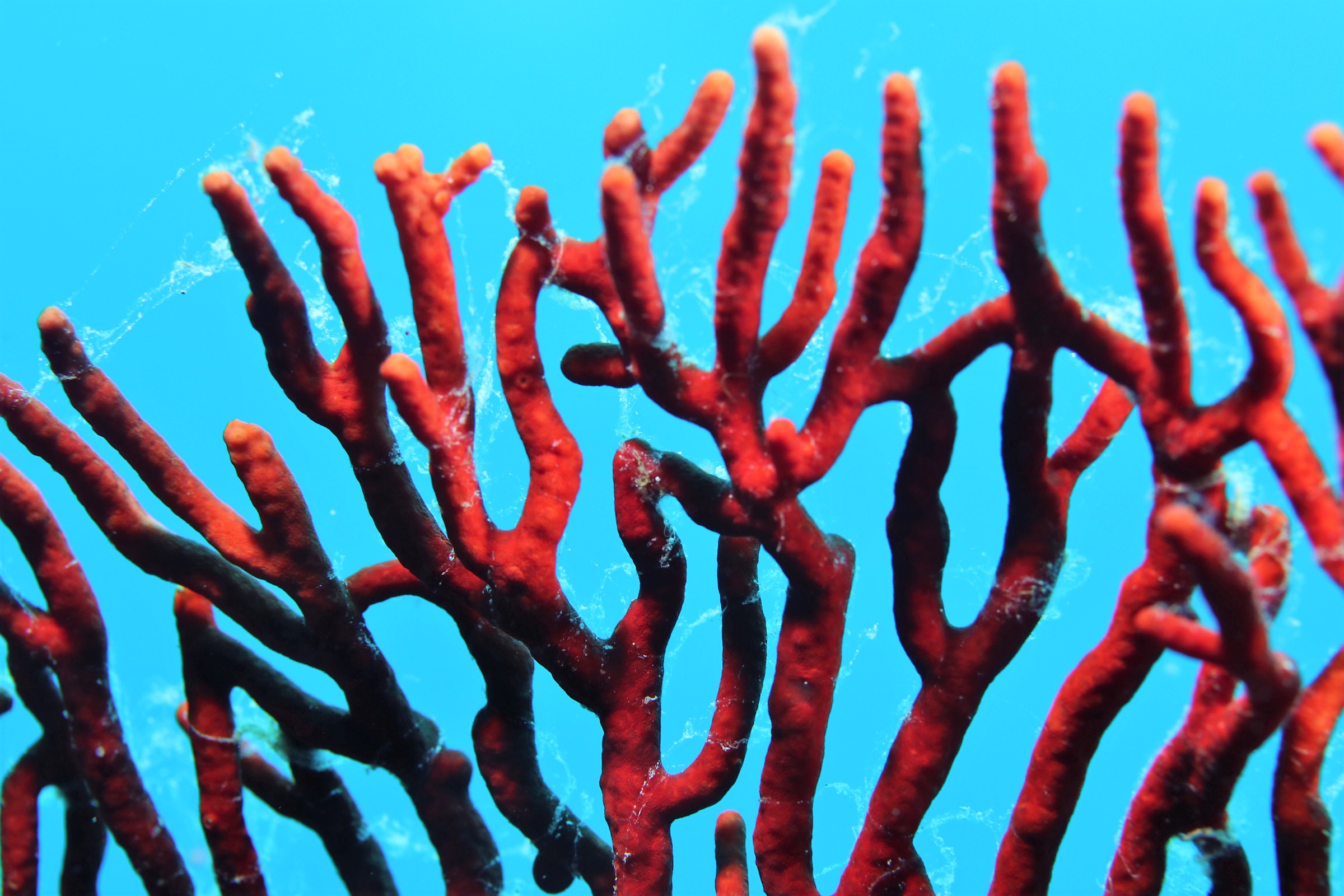 The next morning we arrived in Wakaya to dive the reef for the day alternating Lion’s Den, Blue Ridge and Vatu Vai. A pleasant first dive exploring the reefs finding a juvenile ribbon eel, leaf scorpion, lemon coralgobies and long nose filefish, followed by a more active second dive as the current picked up! (Flora at least enjoyed the ride). Over at Vatu Vai we spotted a turtle, sweetlips and napoleon wrasse. It was crinoid city during our dusk dive at Vatu Vai with feather stars out and active walking about the reef and Linea even witnessed a possible crinoid punch up! We were also joined by a schooling fusiliers and a hunting lionfish. Oh and Bernadette spent her day snorkelling with sharks AND a turtle! 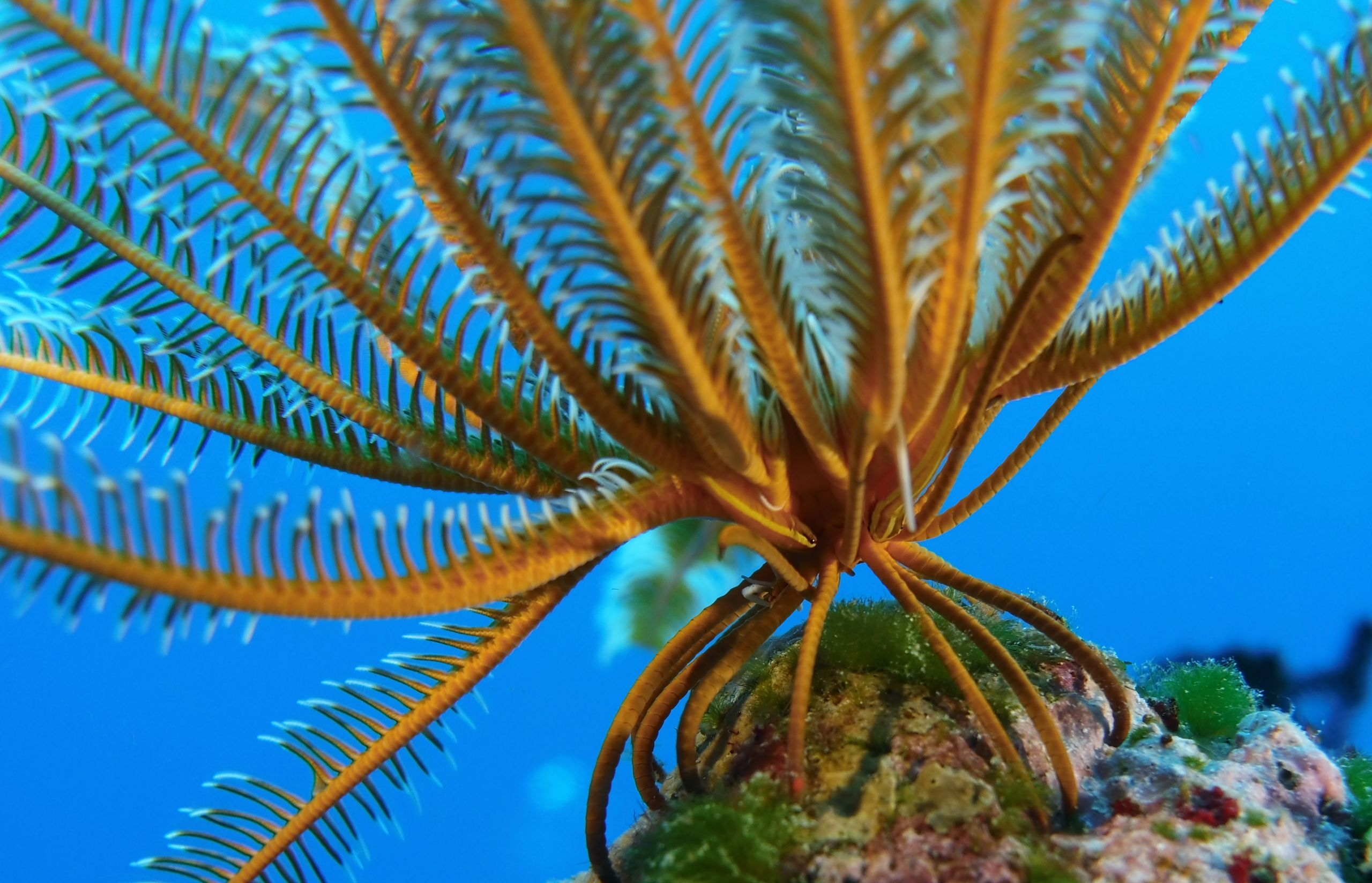 Next up was our stop at the island of Gau. We awoke to a rather wet day…luckily we were spending it under the water anyway. The first dive to the Nigali Passage proved novel with the current turning for us to start our dive and then it deciding to do its own thing (the theme all week) but switching and changing mid dive! However we still had some sharks, barracudas, snappers and jacks to hang out with. As the rain continued to pour it flattened down the sea for our next dives at Anthia’s Avenue and Jims Alley…however the current certainly did not calm down so we found our little corners on the dive sites and zig zagged around avoiding too much of a fight with the current and hanging out with the marine life also sheltering from the current.

Despite the rain we all boarded our skiffs to head over to Somosomo for our village visit, we were able to head straight to the community hall and enjoy some mekes and chatting with our friends. All concurred that getting soaked on the way was totally worth the experience…as Ronnie said, hey we are divers we don’t mind getting wet!!!

For our final morning of diving we double dived our favourite site Mellow Yellow…and found bliss amid the craziness happening around the world. We were able to immerse ourselves in the beauty of the ocean surrounded by the stunning reef. The golden damsels, yellow dendronepthya soft corals and teems of fusiliers, anthias, wrasse and damsels. 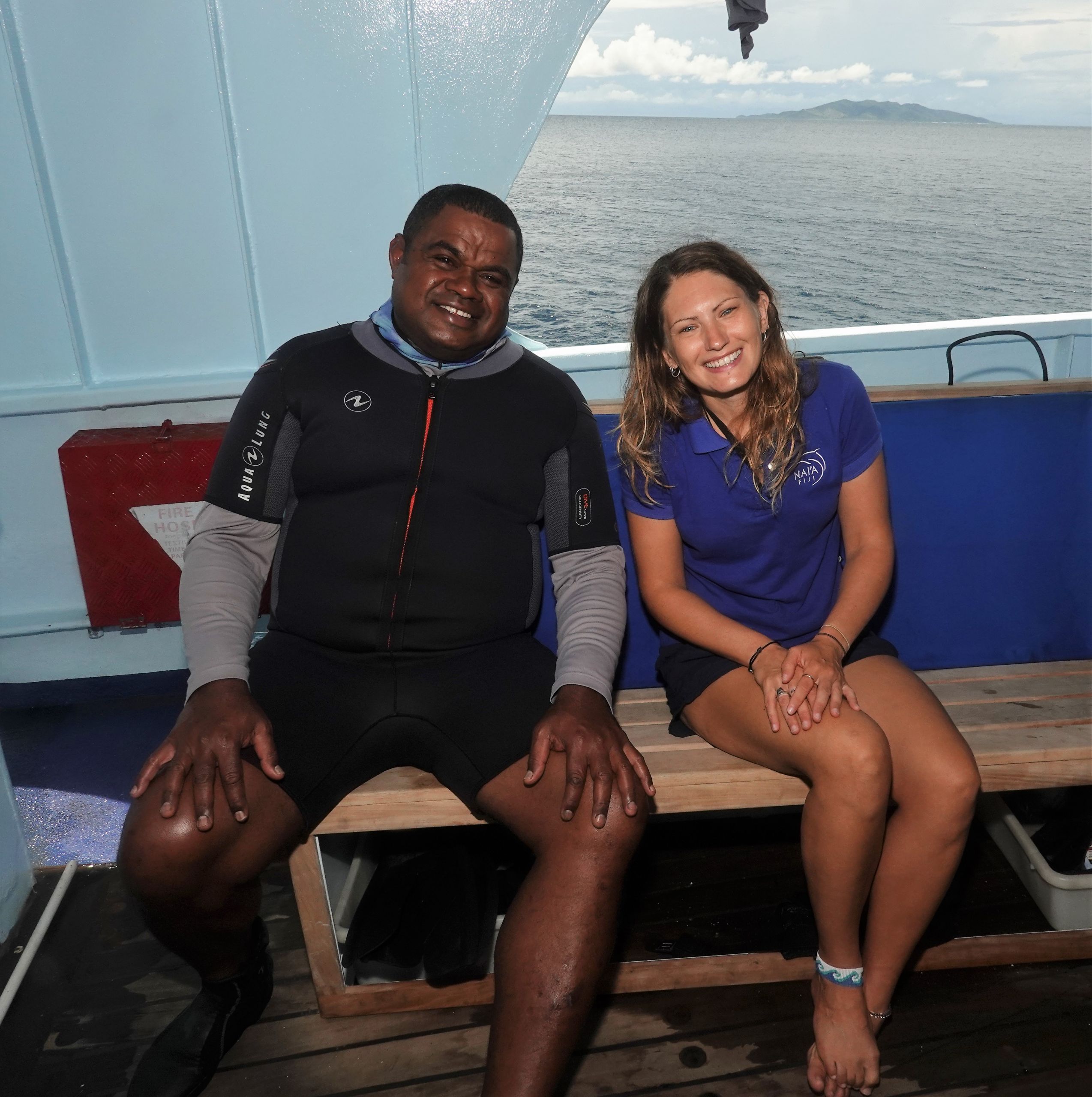 The afternoon was spent organising and re booking flights and travel plans. We dropped off some of the team (Nils, Ronnie, Amy, Roger, Laura and Clare) at Volivoli where they had plans to stay for a bit more diving. After an amazing last meal, the rest of us steamed back along the top of Viti Levu to Port Denarau to enable our guests to disembark and start their journeys home.

We are thankful that we were able to enjoy the week together under the surface discovering Fiji’s beautiful reefs. From this the one question we need to remember is….Matt do you have your weight belt???

Thank you to all of you for your flexibility and attitude throughout this uncertain time, we hope you have made it home safe and will stay healthy and strong until we can all go blow bubbles again!

“I so enjoyed my time on NAI’A, you all took such good care of me” - Sarah 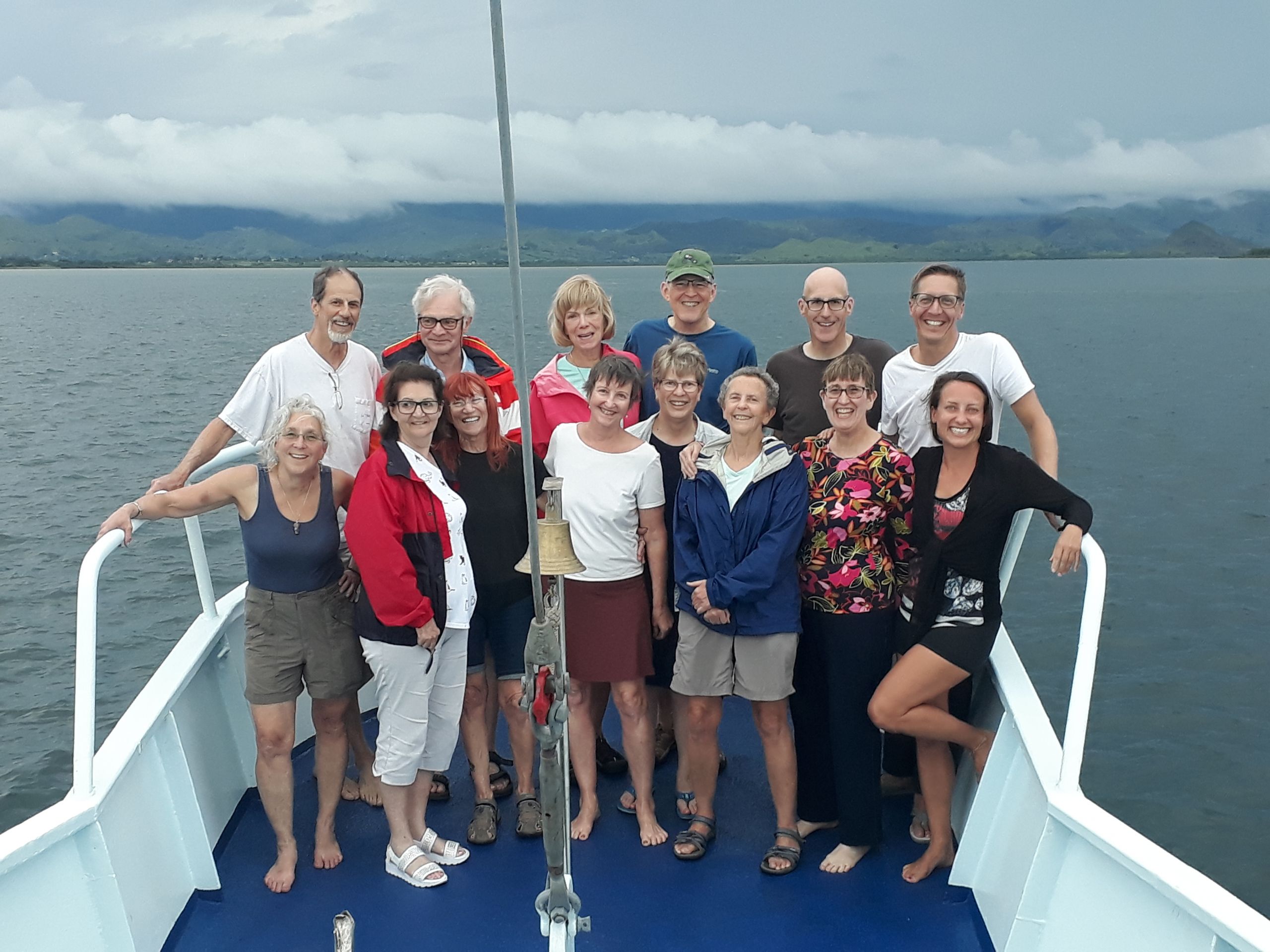